Arguably one of the most divisive turn in 2017’s Star Wars: The Last Jedi was the death of Luke Skywalker. Many fans were left screaming, “Why did the character have to die?!” or “Why couldn’t he have had a more epic death?!”

But after last week’s release of the Star Wars: The Rise of Skywalker trailer, is it possible he won’t remain dead for long?

Of course, this speculation was given even more fuel with the confirmation that Emperor Palpatine (Ian McDiarmid) and his evil cackle would be, in some form, returning from the dead to haunt the franchise. Could his and Luke’s (Mark Hamill) return from the netherworlds of the force somehow be linked?

As was revealed in 2005’s Star Wars Episode III: Revenge of the Sith, the dark lord of the Sith was supposedly taught how to cheat death by his master Darth Plagueis the Wise. In that episode, it was Anakin Skywalker (Hayden Christensen) that became obsessed with achieving this power, bent on saving his wife Padmé (Natalie Portman) from an otherwise certain death. And it was this obsession that was the catalyst for his turn to the dark side.

Though Anakin failed to save the mother of Luke and Leia (Carrie Fisher) and no one else managed to resurrect anyone from the dead during the original or prequel trilogies, Plagueis and Palpatine’s alleged power has sparked much theorizing about certain characters during the sequel era. Since his first appearance in 2015’s The Force Awakens, many Star Wars fans have speculated that Snoke (Andy Serkis) is a resurrected Darth Plagueis — which still has never been confirmed or denied by the films themselves. And now, though that fan theory remains as far-fetched as ever, the return of Palpatine has opened up a few more possibilities.

If Palpatine has successfully cheated death, what other characters might seek out that same ability? What if Rey (Daisy Ridley), missing Luke as much as many Star Wars fans and armed with these same dark side powers, endeavors to bring her old master back from the dead?

Of course, her motivation could extend beyond a mere desire to share a cup of green milk with the deceased Skywalker. 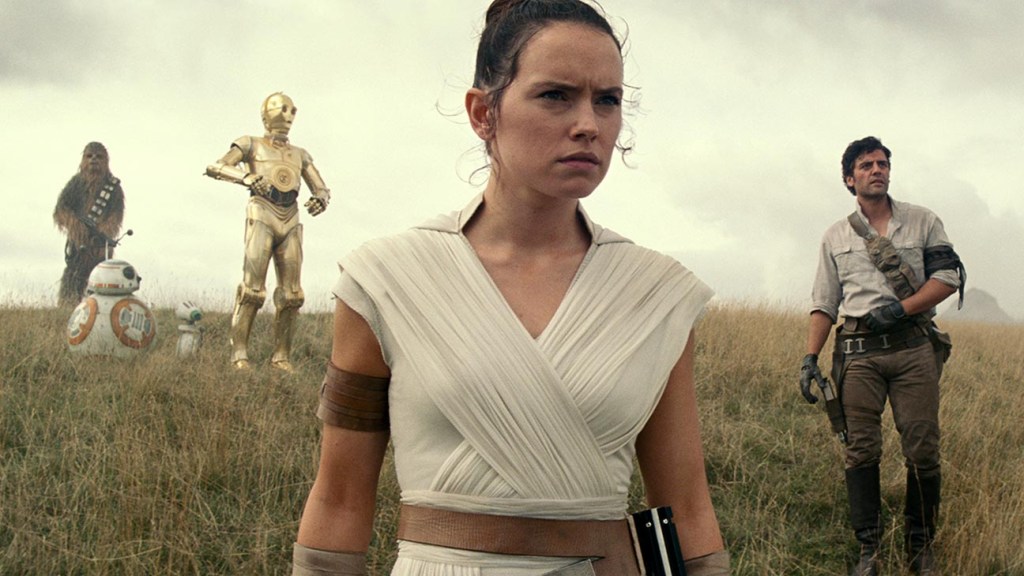 Perhaps between Last Jedi and the upcoming Rise of Skywalker, Rey has been studying the ancient Jedi texts, which were saved from the burning tree on Ahch-To, and has noticed a few missing ideas in their religion — ideas like resurrection. And now, tempted to understand a more wholistic view of the force — not just the dogmatic view of the Jedi — she’s begun to dabble with the darkness.

The fourth season of Star Wars: Rebels has already presented Palpatine’s pattern of tempting Jedi to the dark side, with the promise of reuniting them with their dead loved ones. The Sith Lord attempted to manipulate Ezra (Taylor Grayby), showing him a vision of his resurrected parents.

To raise the stakes in Rise of Skywalker even more, we may discover that Rey is not the only one trying to raise a deceased force wielder from the dead. It’s quite possible that Vader-worshiper Kylo Ren (Adam Driver) is attempting to resurrect his grandfather, Anakin Skywalker. Learning of this, Rey could conclude that the Resistance will need a powerful force on their side to combat the dark lord.

Ultimately, however, the motivation to bring Luke Skywalker back from the dead may primarily be coming from behind the scenes. Perhaps filmmaker J.J. Abrams is simply wanting to help Star Wars fans accept the death of one of their most beloved characters — a theme that the writer and director has explored before in his film Super 8. In that pic, a young child loses his mother in an accident and, through an encounter with an alien creature, learns to let her go.

So, what if Rey does indeed succeed in bringing Luke back from the dead in Rise of Skywalker, but then must spend the rest of the film learning that that was the wrong decision? Part of this newfound understanding may come from an accidental, simultaneous resurrection of Palpatine himself, or perhaps a Luke who isn’t all that happy to be brought back to life — evil zombie Luke, perhaps? More likely, however, this lesson will be learned as Rey recognizes that in death, Luke had become more powerful than she could possibly imagine. In leaving, Luke had allowed Rey to step into her own and become the hero she was meant to be. In falling, Skywalker had enabled the galaxy to rise.

Star Wars: The Rise of Skywalker is set to open Dec. 20.

'Star Wars': The Death Star Mystery in 'The Rise of Skywalker'