From the swoosh of a lightsaber to the beeps of R2-D2, the world of Star Wars is brought alive not just by groundbreaking special effects but also the innovative sounds that capture a galaxy far, far away — which started with the work four decades ago of legendary Star Wars sound designer Ben Burtt. So for The Rise of Skywalker, sound editing Oscar nominees David Acord and Matthew Wood of Skywalker Sound were conscientious about staying within the sonic world created by their predecessor.

“It’s just trying to create that Ben Burtt sound, if that’s at all possible,” says supervising sound editor/designer Acord. “That’s the trick, if you’re going to make a new TIE fighter sound, to examine Ben’s recipes for what a TIE fighter sound is and make that the thing, but with your own ingredients, to extend that metaphor.”

Creating the sounds of Star Wars involves a lot of imagination and experimentation. For example, Acord explains that Burtt’s TIE fighter audio incorporates an elephant scream and a race car on wet pavement.

“In Rise of Skywalker, for the movement where Rey flips over Kylo’s TIE fighter and that whole approach, we use new elephant scream sounds. We use some other animal screaming sounds — no animals were harmed during the recordings of that — and some other motor sounds we used to give it more power.”

All sounds from the previous films are available in a “very sacred” restricted library from which the team found and reused archival elements. Burtt, now 71, remains at Skywalker Sound, pitching in for the climactic scene during which Rey looks out into a starfield and hears the voices of Star Wars‘ past.

Every voice in this sequence, with the obvious exception of the late Alec Guinness, was newly recorded.

“We got Ewan McGregor and Liam Neeson and Sam Jackson,” says Wood. “It was wonderful to have all the actors come back and be able to revisit their characters. I had to fly all around the world to go get them all. Everyone just has such a great love for Star Wars, and it was so fun to see all the different eras of Star Wars represented in that moment. It ends with Luke Skywalker telling her to get up, and then she has both sabers in her hand from Luke and Leia.” 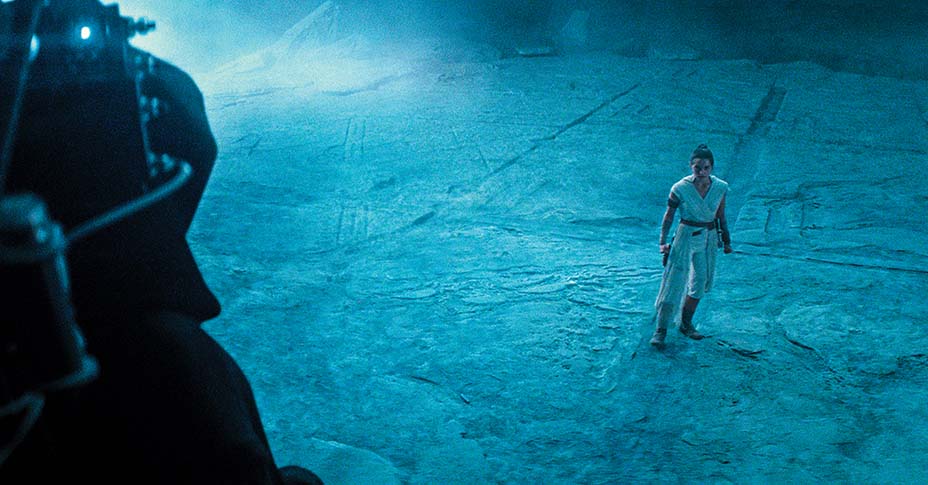 As Carrie Fisher passed away in late 2016, before production began on The Rise of Skywalker, Wood notes that scenes with Leia involved “respectful” use of previously unused footage — both picture and sound. “We mined a whole bunch of samples and material that we had from her for Force Awakens and Last Jedi. So we were able to put [her lines] together with a combination of technology and editorial care from our dialogue department. … I think it honored her character and also worked on a technical level.”

The Star Wars universe expanded in the latest film with new characters including droidsmith Babu Frik, voiced by actress Shirley Henderson (Moaning Mrytle from the Harry Potter series), who learned to puppeteer “so she could improv and actually move the character’s mouth,” Wood says. “She was puppeteering while she was doing the improv for the character. She came up with that language and performed it that way. We preserved all of her production sounds, and that was entirely shot on set, live, with her own movement.”

Incidentally, this duo also served as supervising sound editors on Jon Favreau’s The Mandalorian series (and are currently working on season two), meaning they created the vocalization behind Baby Yoda.

Says Acord: “I was recording animals at this wildlife rescue outside of San Diego. Two of the animals I recorded had this really cute, almost childlike quality to them. One was a bat-eared fox and one is a kinkajou.” Baby Yoda’s initial vocal was made up of only those two creatures.

“Then Jon Favreau thought that they needed to be more human-sounding or something a little more relatable,” he explains. “We dialed way back on the animal part, and now that’s just there for little grunts and coos and purring. We used some real baby vocals for when [The Child] gets really fussy and that kind of thing. Then I have some of my own vocal in there, too, for more of the articulated vocalizations, pitched way up. So it’s a combination of things.”

In Baby Yoda, Hollywood Sees Its Past, Present and Meme-able Future