For one brief moment in The Mandalorian, a generation of Star Wars fans got to see something they’d likely thought about for years, but never expected to actually happen. the Imperial Troop Transport — a vehicle released as part of the toy line in 1979 to support the original movie — was actually on the screen for the first time ever.

Later this year, Hasbro will release the latest addition to its Star Wars: The Vintage Collection line: a version of the Imperial Troop Transport, as it appeared in The Mandalorian, as inspired by the original Hasbro vehicle. (You can see some exclusive shots of it accompanying this story.)

Debuting this spring with a retail price of $69.99, the Imperial Troop Transport is already available for preorder from retailers.

Mark, I have to admit that I am 100 percent the target audience for this. I am the person who had this toy when I was a kid and I am the person that when I saw it on The Mandalorian, I kind of lost my mind.

I mean, to have the opportunity to be involved with this vehicle again after 40 years — it was very exciting for us, as well.

I’m wondering, did you have any sort of heads-up that this show was going to do something based on this toy?

Well, as you might imagine, as we start to work with our partners at Lucasfilm on any new projects, they try to provide us with as much reference as they can. They can help us develop a proper look for vehicles or figures or lightsabers, things like that. So early on, we’re starting to get some of the vehicle reference so that we can develop the product, and then, one day comes along a troop transport. And I just was smiling from ear to ear. “Oh, wow, this is pretty awesome.” My understanding is this is a childhood favorite for [Mandalorian writer, director and executive producer] Dave Filoni as well, so that definitely adds an extra bit of coolness to everything.

Could you unpack more of the process?

It’s a partnership between the Star Wars team in Rhode Island and Lucasfilm. You sit down, take their feedback, try to determine what makes the most sense for their property. Who are going to be the highlighted characters, and how might those characters to relate to vehicles? I’ve always been kind of a vehicle guy — to have a real sense of where a vehicle fits into the story and how it interacts with the characters is really important. When we saw that Mr. Filoni wanted to be able to use the troop transport in The Mandalorian, we thought that this was a perfect candidate for the vintage line. It was the right scale, very figure-interactive. It would allow us to develop a great bit of detail — and, from a personal point of view, something that I really enjoy is that we started with a couple of sketches that were provided to us by Lucasfilm, but there was a lot that needed to be filled in. So from a toy designer point of view, having Lucasfilm allow us and trust us to do appropriate off-camera detailing, if you will, is really something I’ve always been very proud of. 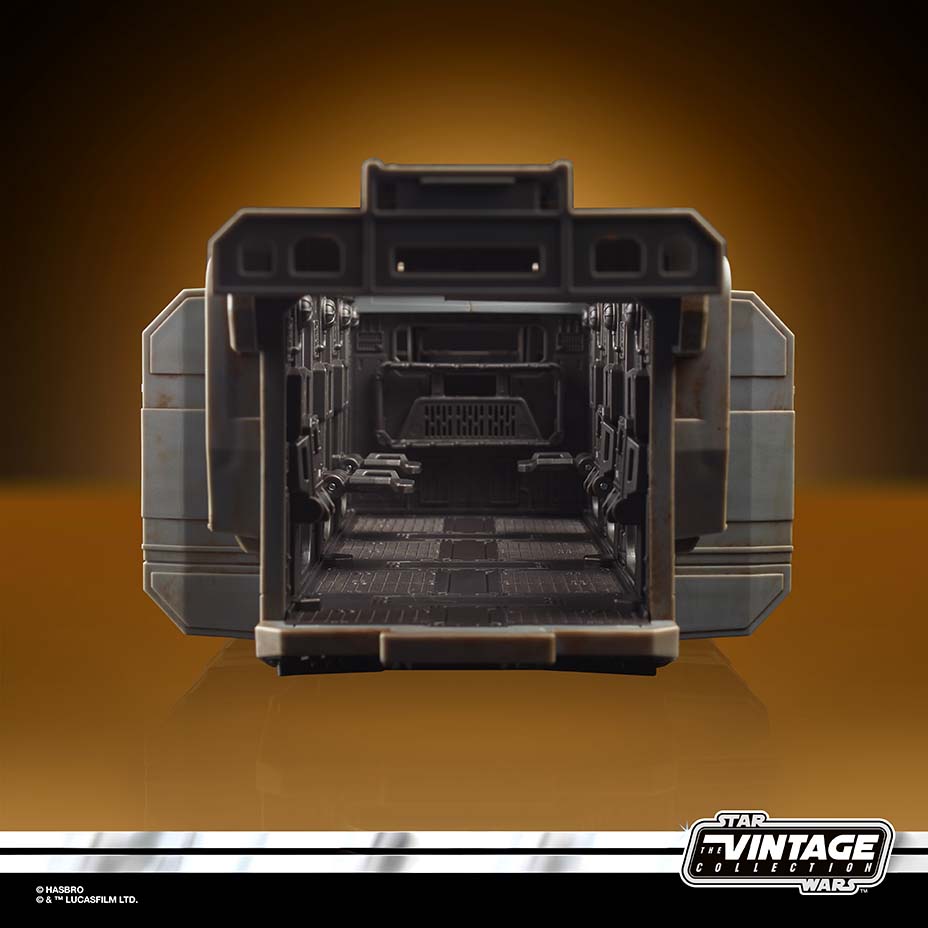 For those of us who grew up with the toys, especially, there was an idea that the toys are as real as the movies, and the transport going from toy to screen and back again feels like a validation of that. Does this change the way that you work on the toys and work on the product design?

Well, it’s certainly not lost on me that it’s been a big opportunity for me to work on Star Wars for all these years. I’m still just a big kid, I just happen to be age-shifted up a little bit. I’ve always been a big Star Wars fan from the very beginning, you know? Never would have thought that we’d be having this conversation 43 years later, but I’m sure glad we are.

It does have this unique place in culture. And I think that the toys and the vehicles have this very important place in that it’s something that is central to people’s understanding of the films.

You’re right. Obviously, the heroes and villains and the droids and aliens are all pretty critical to the Star Wars story, but again, from a personal point of view, to me, it was, “OK, but you need vehicles to get around. Luke can’t be the hero if he’s not flying the X-wing. Han can’t be a hero if he’s not flying the Millennium Falcon.” The Falcon’s a character in its own right! I really do think that the vehicles and that real world sort of grounds Star Wars, if you will.

The vehicles are so out there, design-wise, that people look at them and go, “Wow, what is that?” Everything really does have this place in Star Wars and people recognize that, whether it’s [Lucasfilm vp] Doug Chiang or Dave Filoni or George Lucas or [original Star Wars visual effects artist] Joe Johnston — all those guys understood that, and I think that still rings true today. 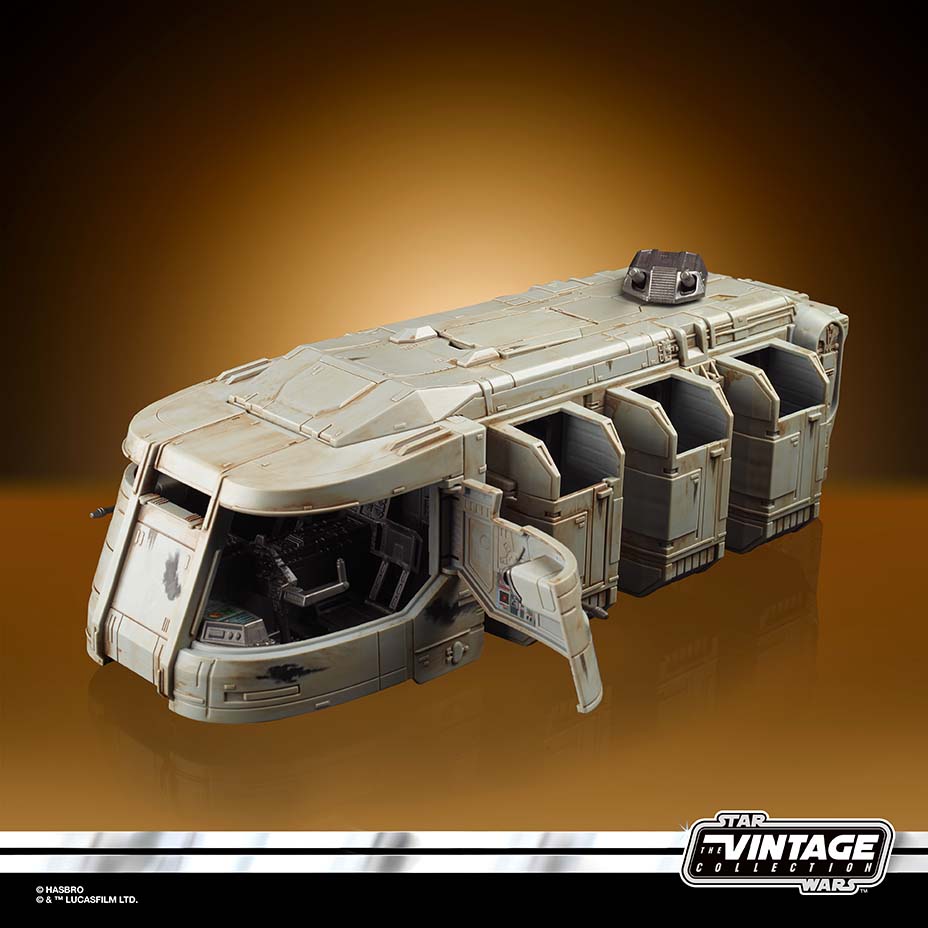 I can’t really speak about anything we might do in the future. We all have a wish list of things we’d like to do. Sometimes, you have to factor in real world realities — sure you’d love to be able to make a Star Destroyer, but that might be a little bit too large. (Laughs.)

As far as developing vehicles, there are so many great vehicles out there. We had a chance to do Poe’s X-wing just recently for the Vintage Collection. We got to do that from scratch with a lot of detail from ourselves. So whether it’s a new vehicle or an old vehicle, any time that we get a chance to update it, if you will, that’s something we’ve always been interested in because we’ve felt that the vehicles really hold up over all these years, whether a vehicle is made 40 years ago or whether it’s made today. Each one of those vehicles was the best they could be at the time, and I think that’s their charm. 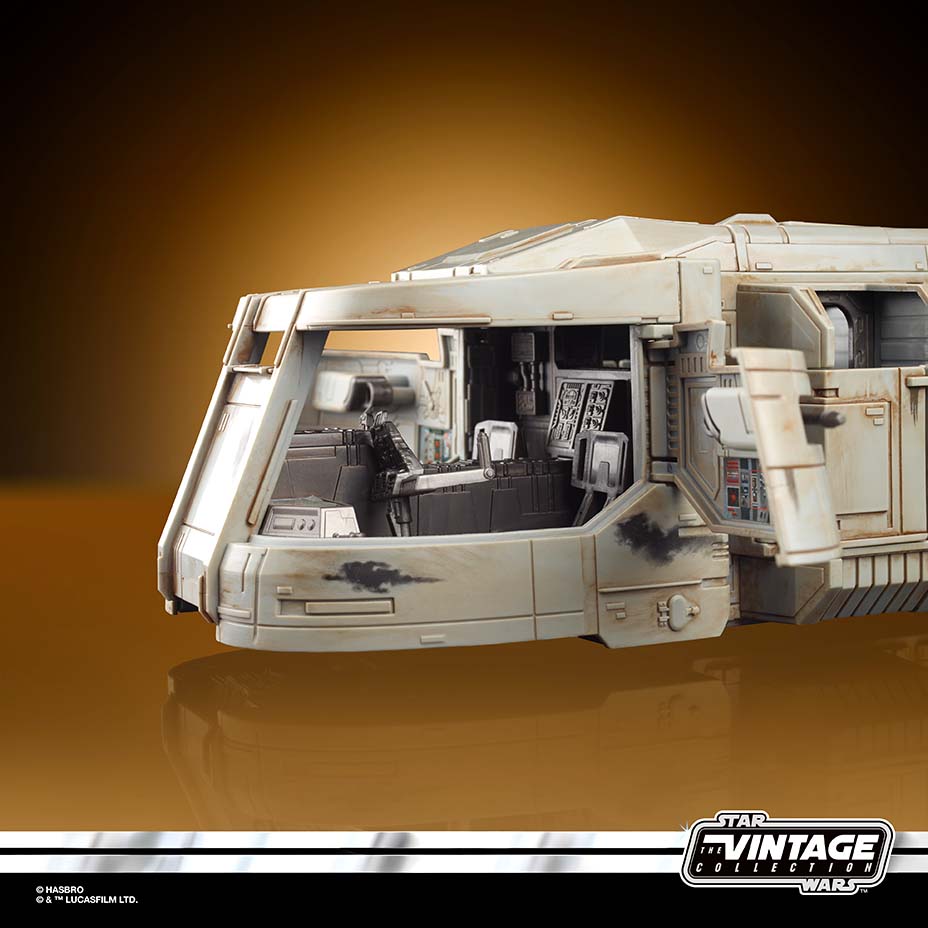