A comedy hero in the U.K. for more than two decades thanks largely to his long-running and much-loved comic creation Alan Partridge, Steve Coogan joined Hollywood’s prestige ranks with 2013’s Philomena and 2018’s Stan & Ollie. Once again blending comedy and what he likes to call “meat on the bones,” Coogan’s latest feature, Greed, which had its world premiere at the Toronto Film Festival, is a satirical attack on capitalism and sees him playing a character heavily based on disgraced “king of the high street” and Top Shop owner Philip Green. Ahead of receiving BAFTA’s Charlie Chaplin Britannia Award for Excellence in Comedy on Oct. 25 in Beverly Hills, Coogan, 53, discussed using humor as a Trojan horse, why being associated with Charlie Chaplin is particularly sweet and whether there’s anything funny about Brexit.

Has Charlie Chaplin had any influence over your work or career?

I’m a huge admirer of Chaplin. He was an entrepreneurial pioneer in terms of entertainers. One of the inherent perennial problems with filmmaking is that it’s a constant tension between art and commerce. And what really Chaplin did was make sure that the emphasis was on art and the art won through. And as he grew older he tried to say things that were important and of course was marginalized and painted as a Communist because he had a conscience. And socially ostracized by the American establishment, because he was someone who wasn’t trivial and tried to use art to make the world a better place. And generally his films are fill of hope and humanity, and that’s something that my company tries to do, to make shows that have value and substance behind the entertainment. So to accept an honor in his name is especially sweet for me.

Greed, while funny, also is a stinging critique of modern-day capitalism. Is comedy the best method to get a message across?

I tend to gravitate toward stuff that has meat on the bones. Documentaries are very important and a format I love, but unfortunately people tend to gravitate back to things that reflect their own prejudices — so anything that provokes or makes people ask questions tends to preach to the converted. But comedy is a great way to sugar the pill on a difficult subject matter. There’s a lot of comedy in Philomena and other films we’re doing at the moment, where you use it to make people think, and you can make people think who wouldn’t ordinarily think about that stuff.

There are a lot of Philip Greens out there, but pound for pound Philip Green gives you more value for your money. Most other unscrupulous, nefarious capitalists tend to be discreet about it. He wasn’t. And that’s what sets him apart. And makes him more entertaining. Most maintain a low profile, Philip Green doesn’t, and in some way you could ay he’s more honest that way. In some ways his behavior is as obnoxious on the outside as he is on the inside. 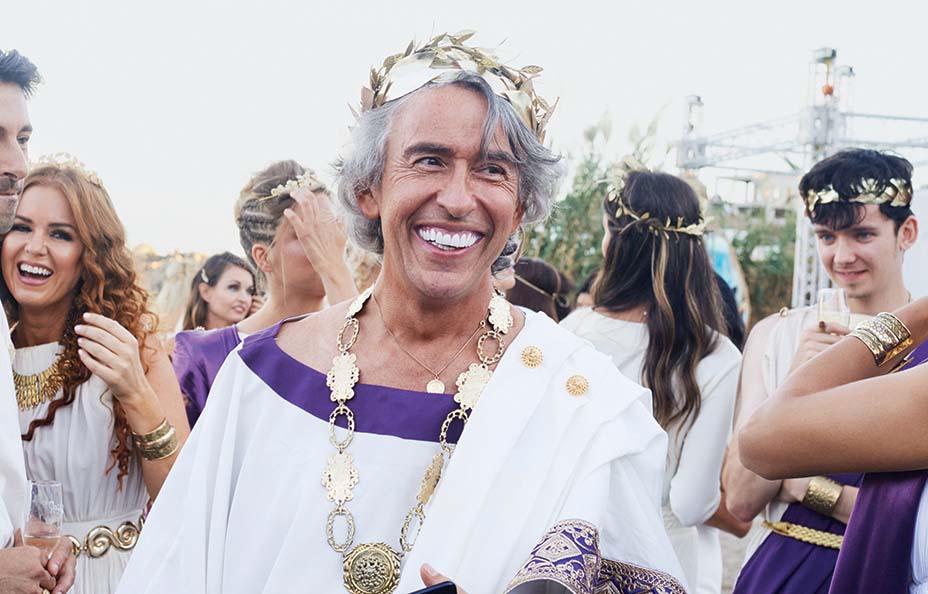 Brits are having a field day at the moment and dominated the Emmys. Is there anyone you consider to be the most exciting talent coming out of the U.K. right now?

Well, Phoebe Waller-Bridge has obviously kicked things up a notch, and I admire her greatly. It’s great that, irrespective of her being a woman, she’s just talented and original and also doesn’t fit into any category. I always appreciate it when people try to do things differently and do things afresh rather than being derivative.

Famed political satire series Spitting Image, where you first started out as an impressionist in 1988, is finally coming back after more than two decades off scereens. Are you pleased to see it return?

I think satire is important. The Americans tend to use entertainment to at least mock their government and call the powerful to account in an entertaining way. We don’t really do that here. But I’m grateful to the show as it gave me my first step into the industry over 30 years ago. I think it’s a shame it ever went away. But doing impersonations is a young man’s game.

Is there a role or project of yours that you’re most proud of?

One that stands out is 24 Hour Party People, a film I made 20 years ago with Michael Winterbottom. It’s something that, as the years go on, my fondness for it grows. But I don’t tend to wallow or look backwards that much, I’m more interested in what I’m doing next. I take it seriously and I try to do things that I’d like to see. The most important thing is that anything I do to be about something other than the literal subject matter that is used to tell the story. It has to have some substance. A lot of creative people, people I’m not particularly empathetic with, make things that are entertaining and are impressive, but if you scratch at the surface they’re not really about anything. But I’m always slightly anxious about getting too comfortable in what you’ve achieved, because people produce the best work and the best art if they court danger and risk failure.

What do you have coming up?

Right now I’m doing a [Alan] Partridge documentary for next year, looking at the soul of Britain and what it is to be British. I think we have a British identity crisis, which is something that is very fruitful for Partridge to talk about. That’s something I’m excited about and will carry on the Partridge cannon. It’ll be a documentary-type odyssey, an exploration of Britain.

I’ve also written a film with Jeff Pope (Philomena) about Philippa Langley, the woman who found the body of Richard III in a carpark. We’re shooting that next year. I’ve just written a drama based on the hippy communes that used to exist in 1969, and I’ve developed a post #MeToo drama that is in development. And in the next couple of years I’m hoping to direct a film, Foxglove, written by Jeff and myself. It’s set in the 1970s about a 10-year-old boy who uses a fantasy that he’s a secret agent to get over the death of his mother. It’s about how a child deals with bereavement.

As a comic, is there anything to be gleaned from the current Brexit chaos?

I think it’s contemptible. Boris Johnson is a contemptible individual. I think [Vote Leave campaign director and a central figure in HBO drama Brexit] Dominic Cummings should be hung, drawn and quartered, publicly. Like most people in the country, I’m exhausted by it. But I am vehemently pro-European, especially with Putin, China and Trump’s USA as the power brokers in this world.

SCREEN PIONEERS OF THE OLD AND NEW GUARD
Emmy and Oscar winners round out this year’s nominees.

JACKIE CHAN: The action icon who has appeared in more than 150 films will pick up the Albert R. Broccoli award.

JANE FONDA: The two-time Oscar winner and Grace and Frankie star will receive the Stanley Kubrick award for her film work.

JORDAN PEELE: The John Schlesinger directing honor will be given to the 40-year-old helmer of the horror hits Us and Get Out.

NORMAN LEAR: The legendary producer and 15-time Emmy nominee will receive the Excellence in Television Award.

PHOEBE WALLER-BRIDGE: Hot off her Emmys domination, the Fleabag mastermind will be named British Artist of the Year.