As the son of a pediatrician, one of the things I quickly got used to as a child were the frequent weekend trips to the hospital. Whether it be the sudden announcement of a newborn that needed to be checked in on or another child admitted under a variety of ailments, that also served as cautionary tales during the drive home, one thing was for certain: I was going to wait for several hours in the lobby.

Sure enough, what started out as some sort of unending torture quickly became the highlight of my week. Across the street from the hospital in Glen Burnie, Maryland, was a small comic shop called Twilite Zone Comics, an intentional misspelling of the popular television program and still the quirkiest, most defiantly old-school comics shop imaginable. My father, in his infinite wisdom, would take a younger me there before our hospital trips and allow me to pick up a comic book to read during my wait. The second comic I ever bought: a reprint of the now-classic Amazing Spider-Man No. 9, advertising that “In this great issue you will meet… ELECTRO! A menace so powerful that Spider-Man’s strength is useless against him.” I couldn’t believe what I was looking at, on this cover in boldly declared words was “The defeat of Spider-Man!” The artwork told a similar story, here was a strangely dressed villain with some sort of starfish-inspired mask, what appeared to be electricity powers, and the smoking, overpowered body of my new favorite superhero. I just had to read it!

Cannes: Tom Hollander to Star in Bille August's 'Me, You' for Brilliant Pictures

I had no idea that the visuals on the cover were done by none-other than the now recently deceased Steve Ditko, but I would quickly come to learn exactly what seeing that name in print would mean. I pored over that fantastic issue, obsessing in the weirdness of the character designs, the specificity of the world and its various characters, and wrestling with the moral complications facing Peter Parker and his costumed alter ego. It would serve as the backbone of my obsession with the character of Spider-Man and launch my quest to own every issue of the series. Twenty years later, I completed that quest, and made sure that my first Ditko comic was a copy of the actual Amazing Spider-Man No. 9.

Now, with Ditko’s passing, I’m trying to find the right words to express my feelings about the man and the impact that his work had on me, from Spider-Man to Doctor Strange to Mr. A. Anyone who has read any stories about Steve Ditko, or invested in any of his work over the past thirty years, knows that he was an incredibly private man with an exceedingly rigid code that he lived his life by. He was the fiercest defender of his work, demanding the credit he rightfully deserved, but never one to showboat or seek any kind of spotlight. The work was the work and he did it well and only according to his own desires.

His desires did not include interviews or public appearances. He wanted the focus of others to be entirely on the work, as that’s where he was focused. The only photos available of the man are a small image from his high school yearbook and several of him hunched over his drawing board back in the sixties. It is strangely fitting that the most detailed description and imagery of the man still remain his appearances that he made in the artwork of his own comics, often depicting him fast asleep or hiding. 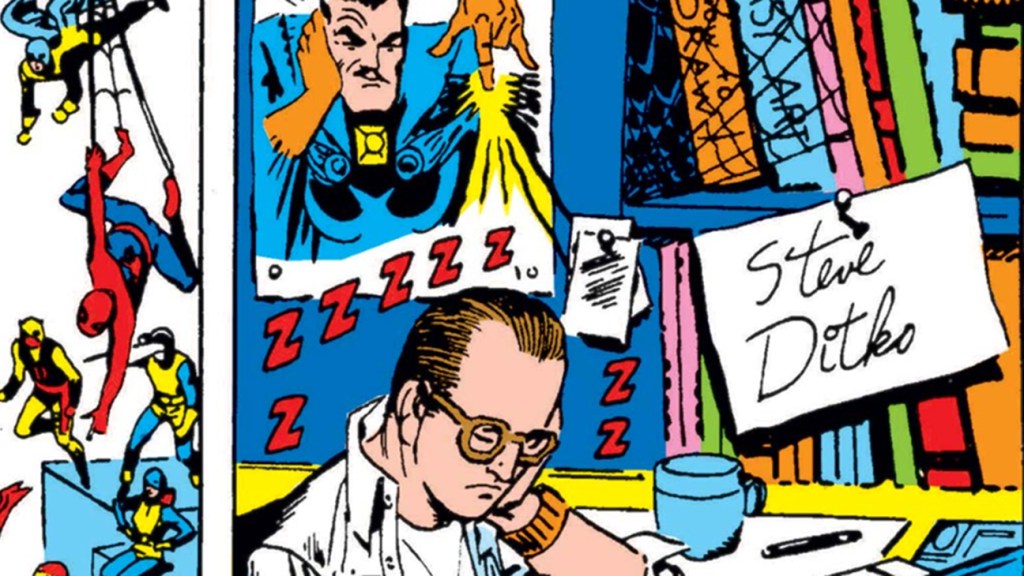 So, any kind of tribute to the man, even in the wake of his death, seems strangely at odds with what he would have wanted. All we can do it seems is tell anecdotal stories about the man we knew (if we were lucky enough to know him) and look to his enormous body of work.

I was lucky enough to support the creation of what seems to have become his final published comic, a comics anthology with a story of The Hero and The Mystery of the Blue Beetle, as published by Ditko’s long-time friend and collaborator, Robin Snyder, just last month. Beyond how incredible it is that he was producing content into his nineties, the book itself retains the qualities of classic Ditko: overstuffed pages full of incredibly emotional artwork, bold character designs, and heightened, dramatic lettering hammering home his thinly-veiled political messages. The final Kickstarter update on the project, on June 11, teased fans, “Thanks to each one of you for your good assistance. Now…what shall we do for an encore? How about…Something Big. Bang.”

We will likely never get that next “something,” but that Big Bang came for me earlier this year when I decided to write a letter to Steve Ditko, thanking him for the inspiration that he provided me through the years through his work on Spider-Man, expressing my love of the comics he’d been publishing recently, and asking him questions about his own inspirations. 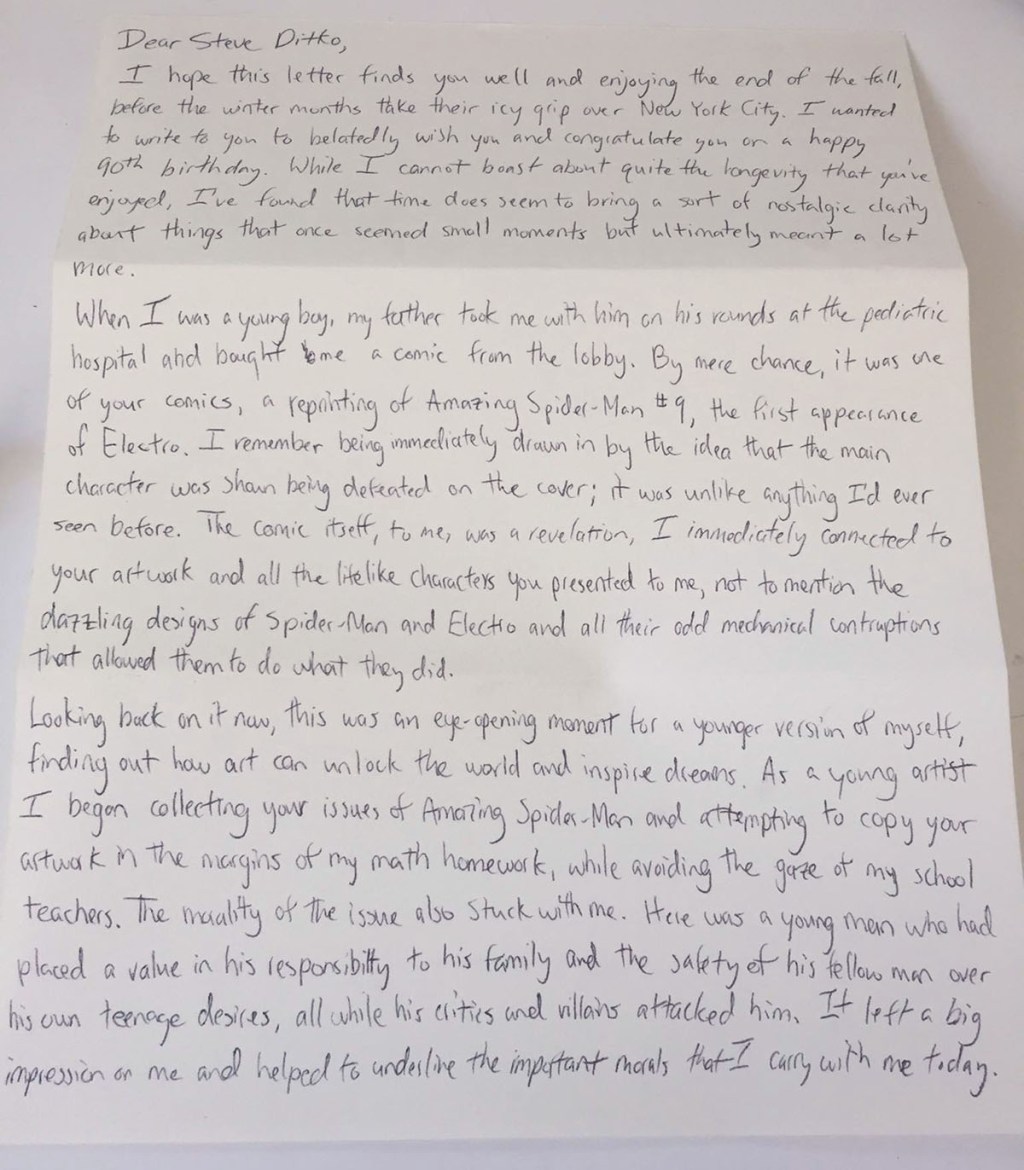 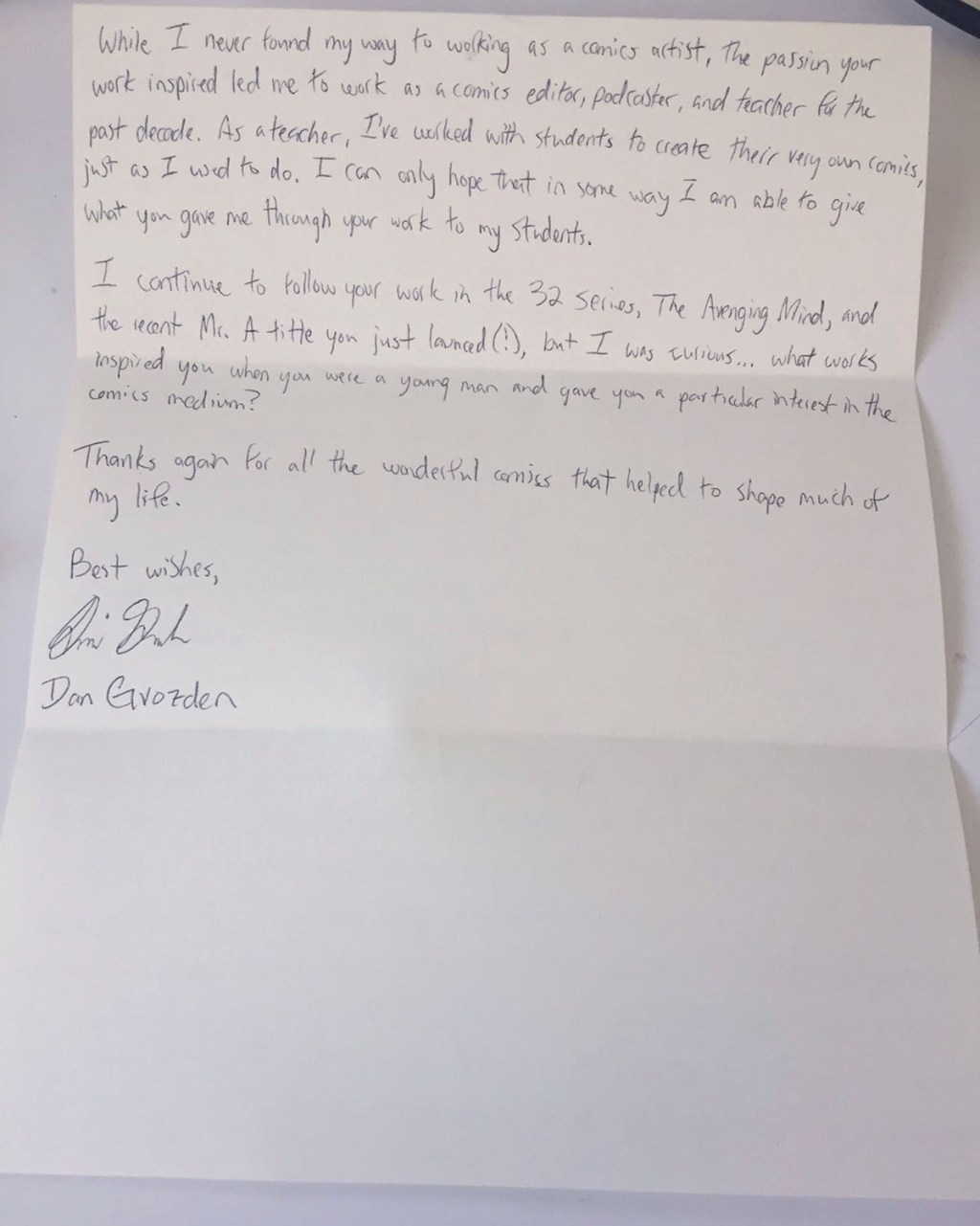 No less than a week later I received a letter from Steve Ditko in the mail, in which he wrote: “The one thing in doing comic books is that past work is irrelevant. As a freelancer, my focus is on — ‘what next’?” 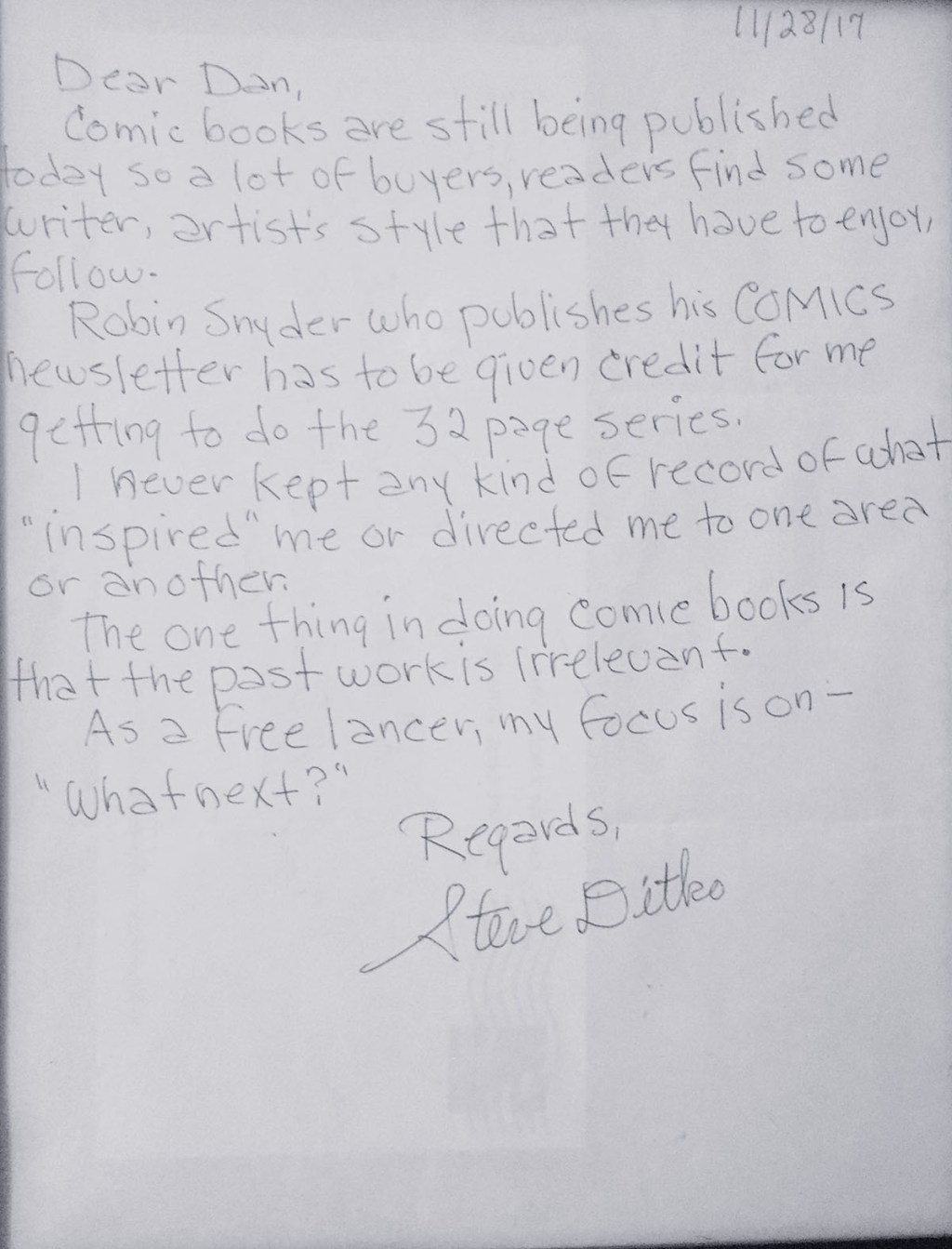 In the wake of his death, I find myself thinking about his “What next?” For artists, like myself, we have an insatiable need to create and look towards the horizon. Yet again, I’m inspired by Ditko’s decidedly specific and uncompromising view, even into his nineties, that “the past work is irrelevant” but what matters is “What next?”

Dan Gvozden co-hosts the Amazing Spider-Talk podcast that chronicles Spider-Man’s past, present and future. He recently wrapped up a whole season about Steve Ditko’s contributions to the character as the co-creator, including interviews with Ditko historians and modern comic artists inspired by his work.