“Because you were home.”

In 2008, those four words capitalized on audiences’ fear of senseless violence, and a lack of safety even within our most sacred spaces. Bryan Bertino’s The Strangers set a new standard for the home-invasion horror movie, serving up three mask-wearing adversaries worthy of audiences’ screams and jumps. It seemed we had burgeoning new slasher movie icons to fill our screens. While reviews were mixed, the film found moderate box-office success ($82 million on just a $9 million budget) and sizable support from home video. A sequel appeared to be the obvious next step to capitalize on this latest horror property, but while details, rumors and shifting release dates surfaced, The Strangers laid dormant for a decade, the first film’s promise that “It’ll be easier next time” left dangling.

Enter director Johannes Roberts, who resurrects the property this weekend from a script by Bertino and Ben Ketai, and delivers what in many ways feels like the final word on the slasher subgenre’s filtration through nostalgia. While we’ve been waiting on studios to figure out how to successfully rejuvenate Jason, Freddy, Leatherface and Michael, slasher icons of the late ‘70s and ‘80s, The Strangers: Prey at Night has beaten them to the punch, both taking advantage of the tropes and styles of that era, and pushing the subgenre forward with what little room there is to do so.

While he’s yet to become a household name among horror fans, Roberts has been working in the genre since the turn of the millennium. The English-born filmmaker made eight features, most of them released in the U.K., and most of them with titles and key art that don’t exactly beg to be watched, before landing The Other Side of the Door (2016), which became a modest international success for distributor 20th Century Fox. While that film has some interesting ideas, it doesn’t leave a strong impression of Roberts as a filmmaker. But the movie that did make an impression and truly showed off Roberts’ style happened almost by accident.

In 2016, days before it was set to be released on DVD and streaming platforms, Roberts’ In the Deep was purchased by Entertainment Studios and set for summer release the following year. Copies of the film had already made it out, but with a name change and clever marketing, In the Deep became 47 Meters Down and one of the most successful independent films of 2017, earning $44.3 million worldwide on a $5.5 million budget. The aquatic horror film stars Mandy Moore and Claire Holt as sisters whose trip to cage dive with the sharks goes very wrong. It is skillfully crafted, and gets the most out of its budget, but had the film stuck to its original format and release date, chances are that it wouldn’t have survived the similarly themed The Shallows, or led to Roberts making a sequel, 48 Meters Down, set for release next year. 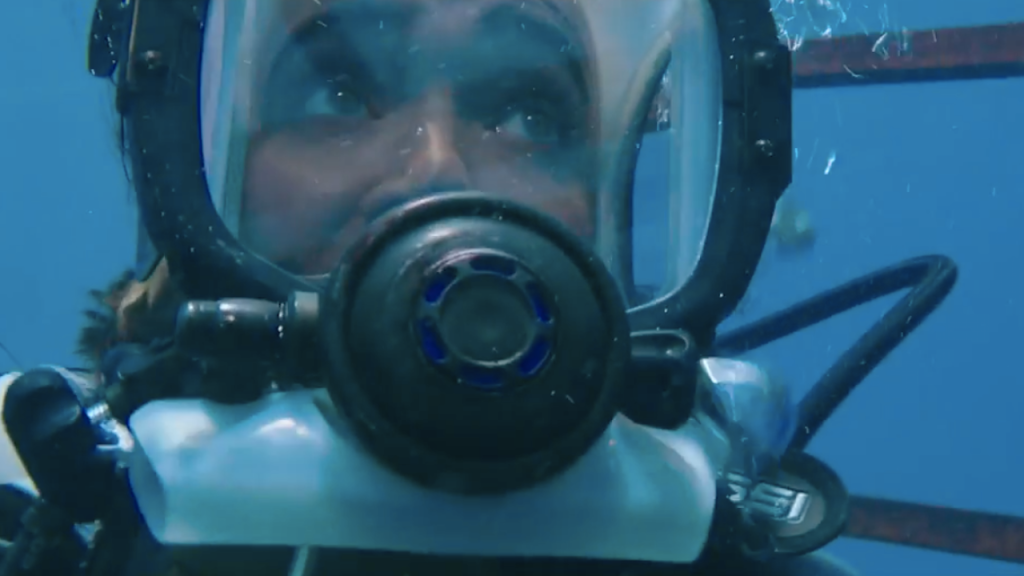 The strange case of 47 Meters Down, and Roberts’ deserved but surprising success is uniquely tied to the reason The Strangers: Prey at Night works as well as it does. While so much of current studio horror arguably operates just as well on the small screen as it does in a theater, Roberts’ craft relies on the theatrical experience. Contemporary horror has become a private affair in many ways, supported by streaming services and indie theaters, which has its own merits and leads to the most personal scares. But Roberts is helping to revive the communal spirit of horror movies, offering up his own junkyard version of America through its most exhumed horror subgenres. In all likelihood, 47 Meters Down didn’t become as successful as it did because of its sharks or star Moore, but because it was a film that played well for large groups of people who could engage and interact with the film. There was a time when Roberts would have been king of the drive-in, much like his idols. While he can’t bring back the drive-ins, Roberts is playing a resurrection game, redefining his career as well as the horror subgenres that have moved into schlock territory, turning them into engaging thrill rides that beg for audience participation.

The impact of Neil Marshall’s The Descent and Steven Spielberg’s Jaws on 47 Meters Down is clear, just as works like John Carpenter’s The Fog and Christine clearly influenced Roberts’ Strangers sequel. While the original Strangers was devoid of any sense of the ‘80s, instead opting for a kind of timeless modern quality, Roberts’ sequel underlines its stylistic debts, with everything from camera shots and music choices culled from the ‘80s, forming an impressionistic collage of a time period that feels made for the big screen. Yet the film, set in modern day, often purposefully clashes with this aesthetic. These outdated scraps of a time past are trappings, much in the same way the three strangers’ masks evoke Americana.

There are no spoken references to horror movies, no meta-commentary to suggest we’re all too smart, too evolved for this kind of entertainment. Instead, Roberts’ distances himself from the worst of ‘80s slasher tropes by focusing on the family (Christina Hendricks, Martin Henderson, Bailee Madison, and Lewis Pullman) at the center of this terror, much in the way Bertino did in the first film. The strangers are driven by an impersonal nihilism, which makes them different from the morality-driven revenge and family-obsessed killers of the slasher movie’s heyday. These aspects that were established by Bertino are pushed further by Roberts, who manages to juxtapose the neon-lit fog of his settings with killings that are too brutal to be stylish, and deaths too slow to create viewer anticipation for the next one. When it comes right down to it, there’s an unmistakable ugliness just below the surface of Prey at Night’s enticing nostalgia. This is the purest slasher movie to come around in years, and while the subgenre will never be horror’s smartest, Roberts proves that it can still be effective.

Nostalgia has become our sacred space, and Roberts’ invades it, destroying the possibility of sequels to this film in the way we’ve come to expect them, as well as destroying the possibility for horror icons ready to carry the weight of yearly installments. The Strangers: Prey at Night is both the slasher film that fans have been asking for, and the closure to the cycle of the ‘80s that we didn’t know we needed. Roberts opts not to make this journey into “next time” easy, and for whatever influences he’s drawing on and whatever unforeseen successes have buoyed him, it’s clear that the director has a voice of his own.