Fox, now part of the Disney empire, would like a summer win with Kumail Nanjiani and Dave Bautista, who star in this week’s high-profile buddy comedy Stuber.

Nanjiani plays Stu, an Uber driver (hence his nickname; Stu + Uber = Stuber), who one day has Vic (Bautisa), a detective working an important case, get in his car. Vic needs Stu to drive him around as he searches for a terrorist, while Stu needs Vic to help him keep his high driver rating.

The studio has run a campaign that counts on both Bautista and Nanjiani being popular, attention-grabbing stars and that audiences are ready for a return of the buddy comedy genre that was so popular in the 80s. Tracking estimates an opening weekend between $7 million and $10 million, in line with movies like Late Night and Long Shot. 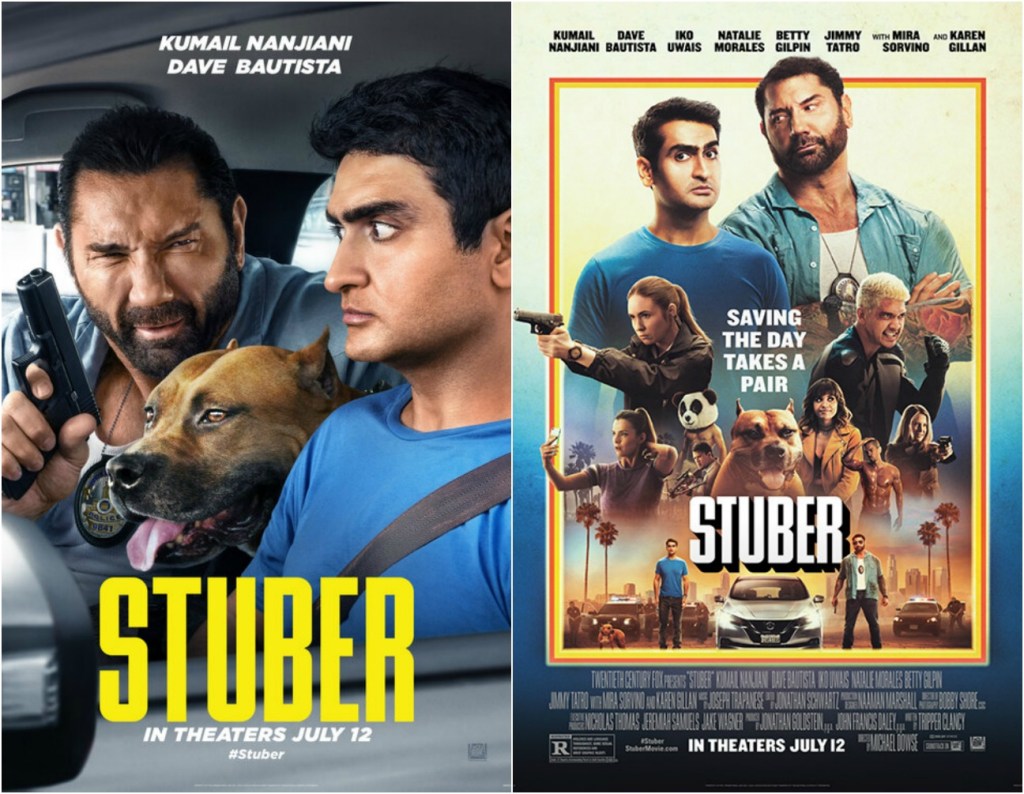 There’s no explanatory copy on the first and only domestic poster (from agency Concept Arts), released in early April. Nanjiani and Bautista are shown in the car they drive around in, a big dog between them. It’s a little unusual that there aren’t any details or tagline, but it seems the studio believes the juxtaposition between the two should be enough to generate interest.

The second poster (from agency BLT Communications), released in June, presents the movie as if it’s a big-budget action film, with Nanjiani and Bautista positioned at the back of an arrangement of elements including women with guns, a guy wearing a panda mask and the Los Angeles skyline. It’s a bit crowded, and the “Saving the day takes a pair” is a double entendre that perhaps works harder than it needs to.

Stu accepts Vic’s ride request as the first trailer (7.7 million views on YouTube) from April opens, a decision he immediately regrets when he finds Vic is LAPD and is using him for “official police business.” The mild-mannered driver does not take naturally to the cop’s world, getting into all sorts of trouble but also having all sorts of adventures as well as causing problems for Vic on many occasions. It’s basically one long montage of clips showing how bad Stu is at police work, but that’s the message being sent so sure, why not.

The second trailer (315,000 views on YouTube) from early June was a red-band edition starting off with Stu picking Vic up before soon getting involved in his police activity. A lot of comedic violence ensues. We also get more of an idea of why Stuber would like to be done with this particular ride and get home to his girlfriend.

A few weeks later Fox released a #TBT trailer (883,000 views on YouTube) that presents the movie in the style of a 70s action movie, complete with brightly colored transitions and a soundtrack featuring jangly guitars and funky bass lines. 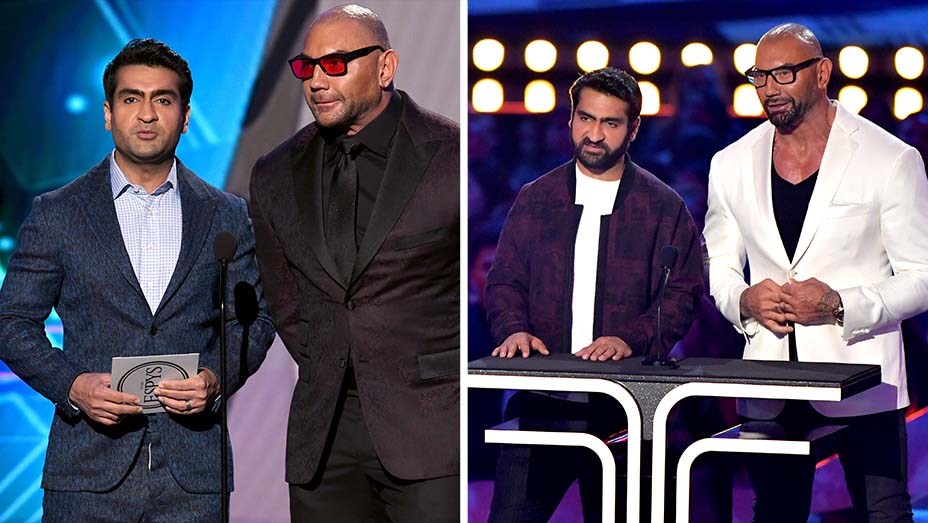 The movie debuted at SXSW, with a first-look photo being released just in advance of that screening. A month or so later footage was shown at CinemaCon, enticing theater owners and others with the promise of an action comedy audiences will enjoy.

The first trailer was used in a promoted tweet after it was released. Another promoted tweet on #BestFriendsDay in June included the second red-band trailer.

New scenes not shown in the first trailer were included in the first TV spot from early June that focused on the comedy brought by the stars instead of offering much — or any — details on the story.

The first clip released about that same time offers an extended look at Vic getting in Stu’s Uber. Further clips explained how Stu got the nickname used in the title, a longer look at a fight scene shown in the trailer and more.

Additional TV commercials continued using previously shown footage to sell the movie, hoping repetition will make the whole thing funnier. One in particular presented it as the “most outrageous comedy event” audiences could choose.

Both Nanjiani and Bautista acted as presenters at the recent MTV Movie and TV Awards in June and at the ESPY Awards in July.

Fox sponsored a promotion during a recent WWE Network profile of Bautista that included an appearance by Nanjiani praising — and poking fun — at his co-star along with footage from the film. WWE also produced an “inside look” at the movie that makes sure everyone knows it has their seal of approval.

The movie made another trip to Austin a week prior to release for a screening and Q&A at Rooster Teeth’s RTX event. A street team of scooter drivers drove around the city at that time with each scooter featuring a cutout picture of Stu.

Since a number of NASCAR drivers appear in the movie — which makes sense given how car-centric the story is — the racing league released a co-branded promotional video that highlighted their involvement.

Also on the sports front was a commercial from ESPN that had “bros” Bautista and Nanjiani hanging out at a luxury resort with a couple of “bros” from SportsCenter. 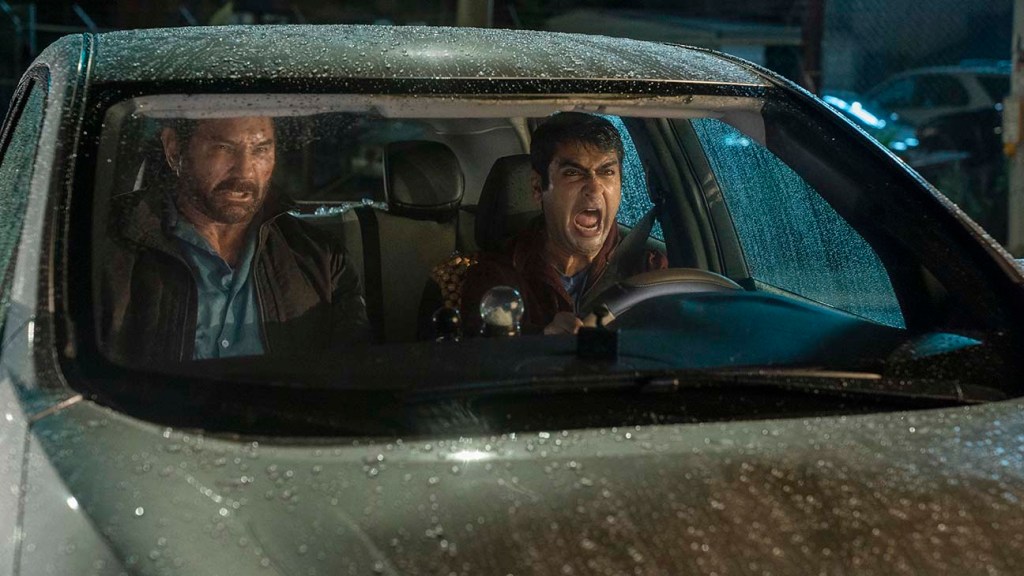 The demise of comedies is a media narrative going back at least four or five years, driven largely by how movies like those from Marvel Studios combine both action and laughs. Theatrical audiences, this narrative goes, no longer have much interest in those that offer just one.

Fox has read the room and seems to understand that comedies are not the surefire box-office gold they were 20 or 30 years ago, hence a campaign that is more heavy on gunfights and light on overt comedic moments. There are definitely funny bits sprinkled throughout the trailers and TV spots, but the focus has been on the car chases and gun fights.

Of note is the dropoff in views between the first two trailers, from 7.7 million to just over 315,000. While the #TBT trailer released later rebounded a bit, it’s still nearly 7 million views fewer than the first one.