With mixed-to-poor notices from critics, STX Entertainment has its work cut out for it with The Happytime Murders, as it debuts Aug. 24.

The conceit that puppets exist in the world alongside humans isn’t unique, exactly. The Muppet Show and subsequent movies all used it. What this week’s The Happytime Murders seems to do differently is draw a clear line between those characters’ onscreen personas and off-screen lives.

Directed by Brian Henson (son of Jim) and starring Melissa McCarthy, the story revolves around a string of puppet killings that appear connected. Detective Connie Edwards (McCarthy) is tasked to investigate, partnering with Phil (voiced by Ryan Tran), a retired puppet cop now operating as a private detective. The trail leads them into the seedy underbelly of the puppet world, which is far from family friendly. 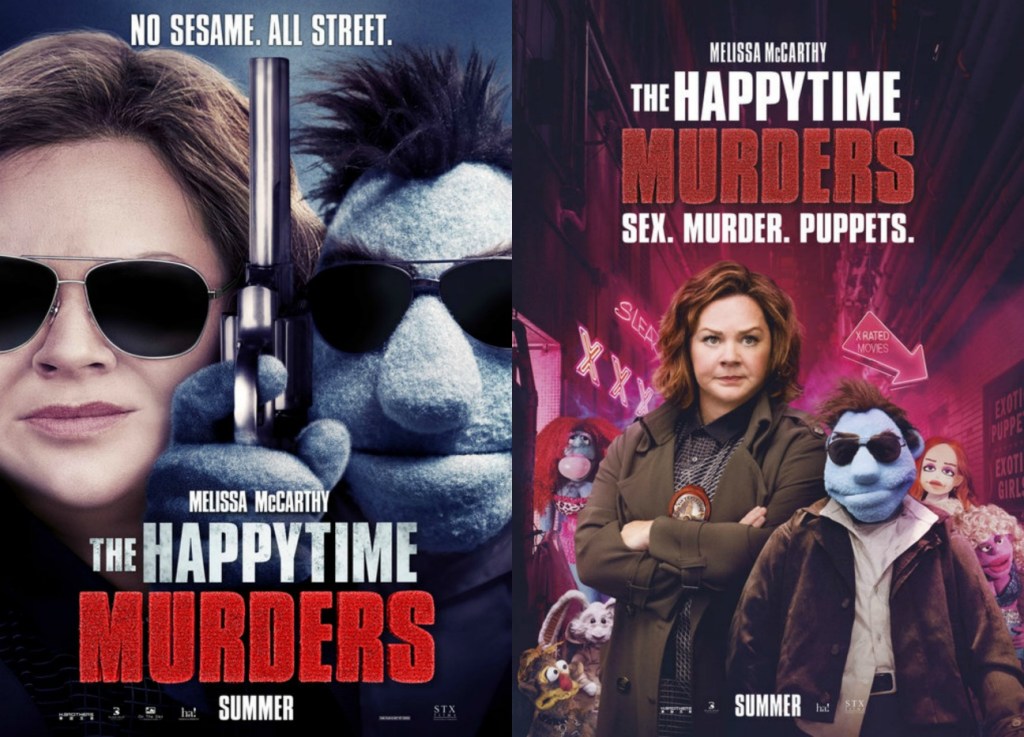 Connie and Phil are arranged on the first poster in a style that’s very reminiscent of countless other buddy cop movies, their faces placed side-by-side with a gun held between them. The difference here is that one of them is a puppet made of blue felt. “No sesame. All street,” is the same copy point used in the trailer, having some fun with the notion that this is *not* a family friendly story.

Perhaps due to a lawsuit and controversy surrounding the usage of “sesame” and “street,” the tagline on the second poster from late July is “Sex. Murder. Puppets.” That’s more of a plot synopsis, but it gets the basic point across, especially when paired with the image of McCarthy and her puppet sidekick.

The first red-band trailer (3.2 million views on YouTube) from March promises to show us what happens when the cameras stop rolling on a puppet show. Phil and Connie are teamed up to investigate a string of killings that seem to be targeting the stars of an old show, an investigation that takes them into all sorts of seedy places. With jokes about prostitution, drug use and other illicit activities, it certainly aims to set itself apart from other puppet movies.

A short trailer (159,000 views on YouTube) in mid-August, about two weeks before the movie was released, offered a bit of new footage but was focused on including Twitter comments from those who had seen the movie or were looking forward to it. All those comments were centered on how outrageous the film was, with the scenes shown certainly supporting that. 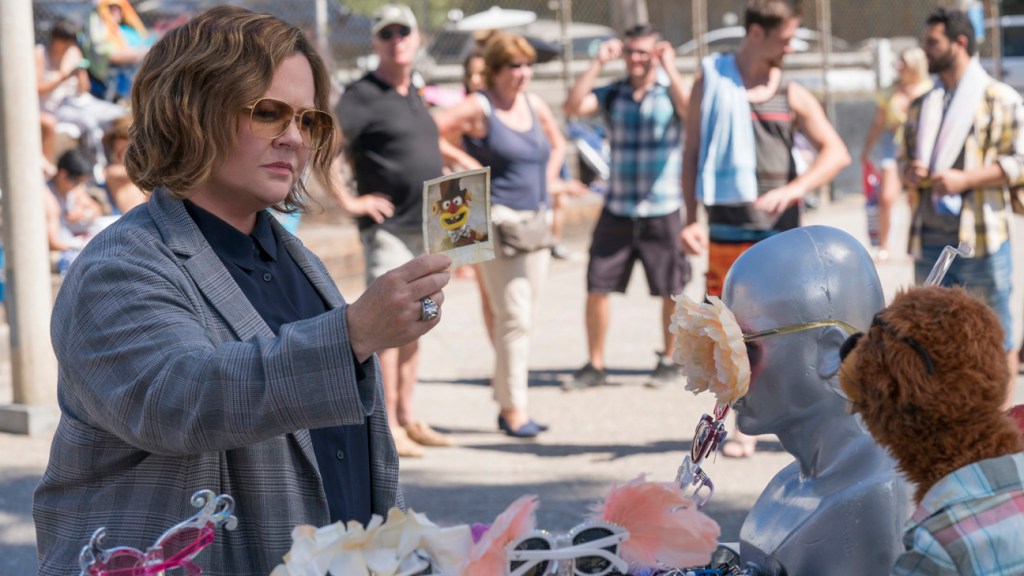 Around early August pre-roll ads started running on YouTube that didn’t worry about communicating the story but instead just sold the movie based on crude-talking puppets interacting with Melissa McCarthy. The same message was offered in promoted Twitter posts like this that ran like TV spots.

An actual TV spot didn’t feature any footage from the movie, but instead had Phil reciting lines from famous cop TV shows and movies in front of a mirror, like he’s practicing being a tough guy. That’s an approach that just makes it look like it will rely on a bunch of pop culture references.

There was a paid appearance by Phil on Jimmy Kimmel Live that had him interviewed by Guillermo, an interview that didn’t go well, as Phil wound up storming off in protest. That came at the same time as a video where there puppets read mean tweets, a variation on a frequent bit on Kimmel. If you’re a Snapchat user, you could also add some movie imagery to your snaps via sponsored stickers.

A whole series of in-world videos were created and released that sought to extend the concept and provide some backstory or additional detail on the characters. That included a commercial for Phil’s private detective business that had him promising to do whatever you needed him to do, and a “True Hollywood Story” on the careers of the puppets.

Faux PSAs were released that sought to take us into the world of the puppets. Each one warned against the dangers of syrup, encountering dogs, sugar sticks, four-letter words, the dangers of the internet as well as pornography.

The studio created a real-world version “The Inkhole,” a seedy bar from the movie, in Los Angeles that consisted of actual production sets and other marketing materials and where visitors could get tattoos with passwords that lead to secret bars and other experiences. That experience was promoted on Twitter, where you could RT for a chance to visit.

There was a good amount of publicity around the movie based solely on its premise, but it also was part of STX’s CinemaCon presentation in April as the studio sold it to exhibitors. 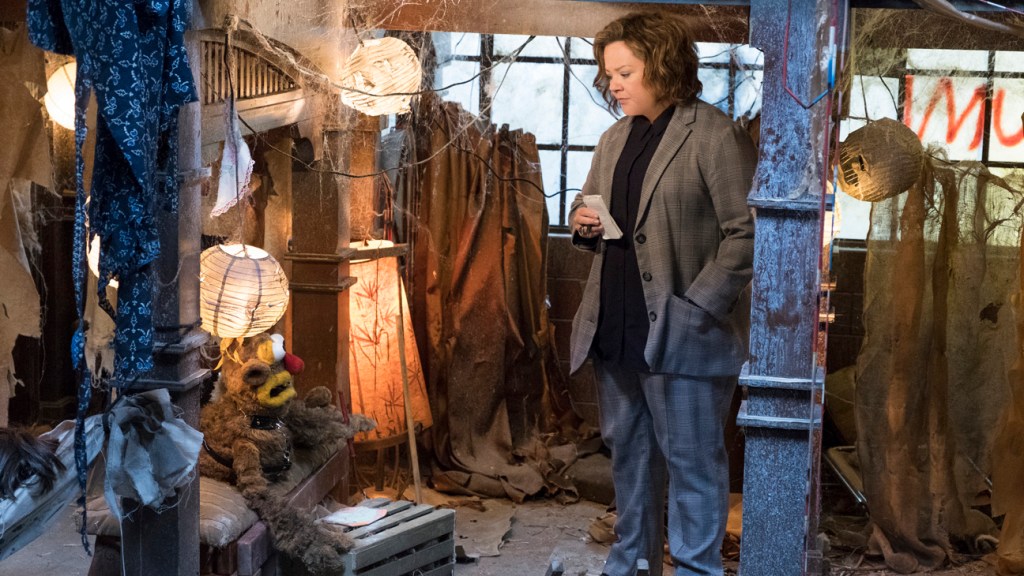 The most striking thing about the campaign is not the outrageous puppet antics it shows are part of the movie. Those are on display quite prominently and there’s certainly an element of shocked surprise at the disconnect between the kinds of violence and other activities shown and the fact that they’re being engaged in by puppets.

Instead, the point that comes out most is the apparent reluctance on the part of STX to use the movie more in the campaign. The effort to flesh (or felt, as the case may be) out the world of the movie is interesting, but it also fails to really offer the audience any promise of what to expect should they see it.