Continue to The Hollywood Reporter SKIP AD
You will be redirected back to your article in seconds
Skip to main content
May 19, 2021 1:23pm
Logo text

Suki Waterhouse continues to be a rising star in the genre sphere, but that’s merely one side of the versatile English performer. Returning to the screen in Simon Barrett’s directorial debut, Seance, Waterhouse plays Camille Meadows, the newest enrollee at a prestigious all-girls academy that recently lost a fellow student to a mysterious suicide. Shortly after Camille’s arrival, she takes part in a seance with five other girls in order to figure out what actually happened to their deceased classmate.

Since Seance features an all-female cast with one exception, Waterhouse credits Winnipeg, Canada’s brutal winter weather for bringing her and her castmates together.

“We all completely lost our minds. Honestly, we did,” Waterhouse tells The Hollywood Reporter. “It was so isolated. We really just had each other and we all really got along, which was great. But there was nothing to fill your downtime with because if you stepped outside, it would actually hurt. So we would all cook each other dinner and hang out back at our apartment building. When it’s all girls, you kind of form a pact, and then any boy is terrified of all of you. And we were all quite similar to our characters in a strange way.”

“[Carrey] was pretty in character because he came early and camped out in the desert with a camp van. And he’d been out there for a long time,” Waterhouse shares. “He was completely unrecognizable, and he really had the long nails and everything. So I kind of got to know him more later on, and I had my first actual talk with him after the movie. So it wasn’t a normal experience, but it was really, really cool because it was shocking to see him like that.”

In a recent conversation with THR, Waterhouse also discusses her own paranormal experiences, her musical endeavors and the Judee Sill biopic she hopes to make.

This is such an unimaginative first question, but have you participated in a seance?

Well, I actually did do quite a prominent Ouija board thing a few years ago. And it did work and it was actually really scary. But at the time, I’d had a couple of drinks with a few girlfriends, so it didn’t really quite sink in. But I was actually having quite a real paranormal experience. So the answer is yeah.

Since the academy that Camille attends is also haunted, have you ever sought out haunted hotels or anything along those lines?

Well, there was a street in the English countryside that my mum grew up near, and she told me that there was a ghost family that used to live around there. And my granddad is very into scaring all of us; it was always a thing with my mum and his grandchildren. He would try to summon things, and put masks on. He did crazy stuff. This is probably too much, but he used to put masks on and fire shotguns with an empty chamber. He would do crazy stuff to scare us. So I kind of seek out that stuff. I don’t think I’m very sensitive to paranormal activity, but when my sister comes and stays with me in L.A., she says that my apartment is completely haunted and that there are dead old ladies everywhere. But I haven’t seen them. (Laughs.) 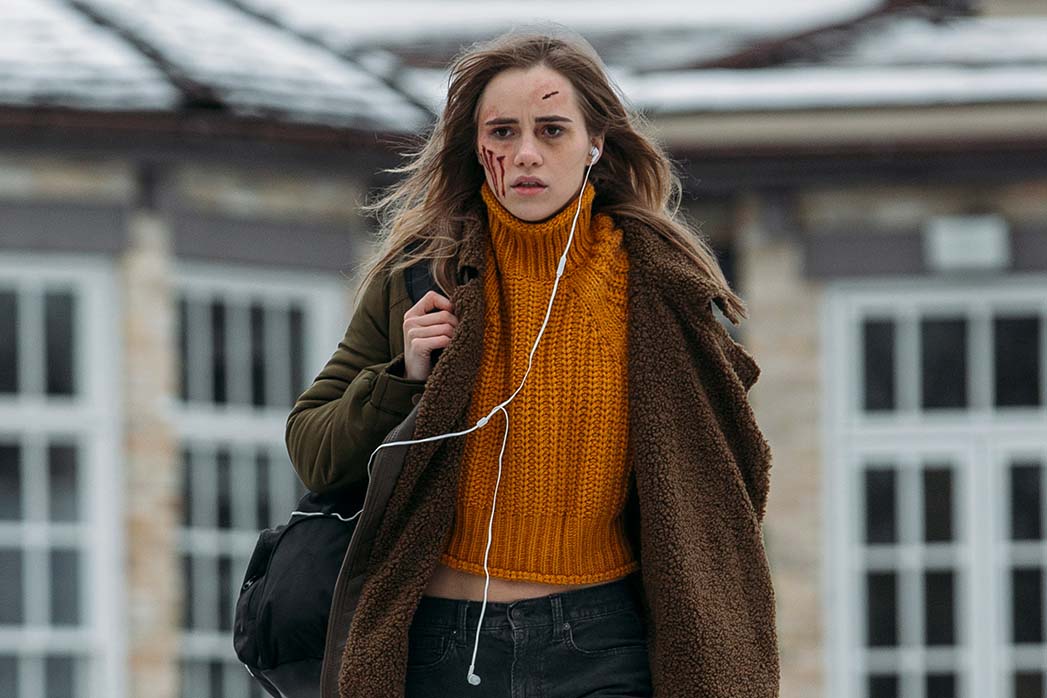 Camille started off on the wrong foot with the rest of the girls when she refused to move to another table. When you were in school, were you the kind of person who would’ve immediately moved to another table? Or do you think you would’ve stood your ground like Camille?

Well, I’m sorry for reminding you of some sad memories, Suki.

(Laughs.) No, it was the best! I loved it. I like solitude, and I like being alone and googling stuff, honestly.

Since you shot Seance far away from home in Winnipeg, how did you make yourself feel at home during your downtime?

We didn’t. We all completely lost our minds. (Laughs.) Honestly, we did. This was Simon’s [Barrett] first movie [as director], and the other day, he was like, “I was so nervous. I was worried all the time about making the day. I was terrified.” And I was like, “Oh, well, that never came across. Did you know that all of us girls were completely losing our minds and crying …?” (Laughs.) It was so isolated. We really just had each other and we all really got along, which was great. But there was nothing to fill your downtime with because if you stepped outside, it would actually hurt. So we would all cook each other dinner and hang out back at our apartment building. The only thing that I did to fill my time was get really addicted to astrology apps. It was really bad, and I feel like I actually had out-of-body experiences doing it so much. It got so bad that I really thought there was some sort of impending doom that was about to happen to me. (Laughs.) So I had to delete all of them at the end of the movie. I was like, “Enough. Goodbye.” 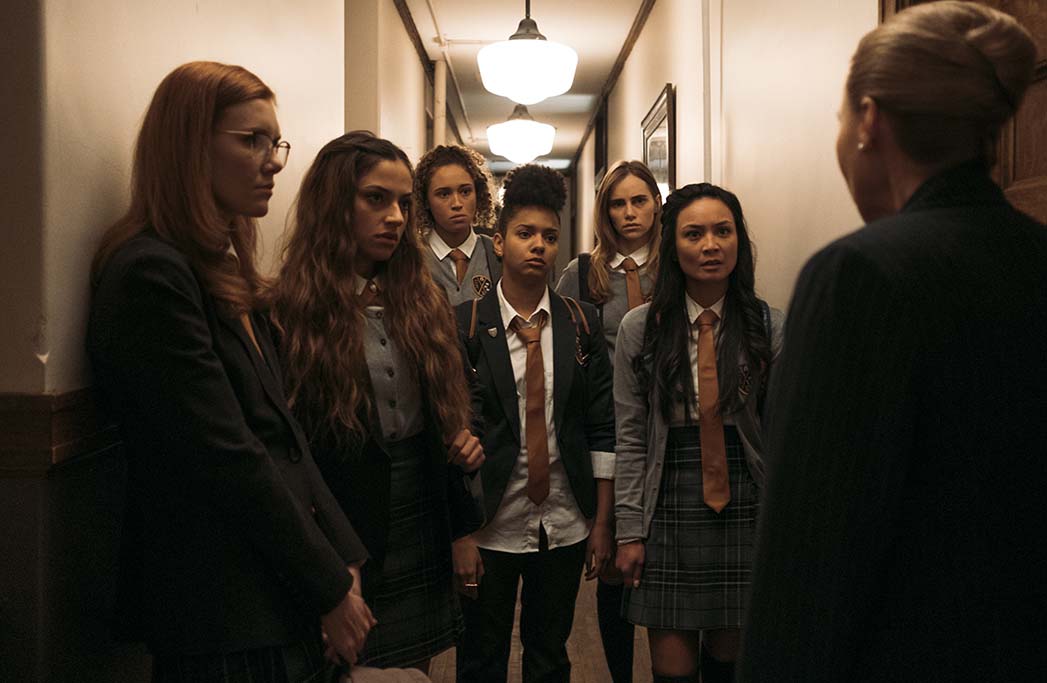 Because Seance was an all-female cast with one exception, would you and your castmates often comment on this all-too-rare arrangement?

Sometimes, I’ve been the only girl, but most of the time, there’s loads of women around. When it’s all girls, you kind of form a pact, and then any boy is terrified of all of you. And you always have quite a feisty pact when it’s all women. But it was lovely, and we were all quite similar to our characters in a strange way. We just blended in really nicely.

You do many things so you’re often described as a “multihyphenate.”

Multihyphenate is such a horrible word, isn’t it?

We could’ve clocked a few more hours that day.

Did you gravitate toward acting since it allows you the chance to not be yourself for a select amount of time, unlike your other occupations?

I don’t know. I don’t really feel like I do that many things. But I gravitated toward acting because there’s always something to work out through the character, and you’re never quite sure what it is until you’re actually there. But it’s always something very nourishing, and you’re always surprised by what it gives you.

Does the creative high of acting feel similar to all your other endeavors? Or does each job — whether it’s singing, modeling or photography — offer its own unique feeling?

Well, I haven’t had a modeling agent in years. So I’m not a model anymore, but I do like making music.

Right, but you still have a frame of reference for each.

Yeah, they’re just entirely different things. I mean, I’ve been really excited about music for years, but it’s kind of been a private thing that I’d share a little bit. It’s taken me 10 years to get an album together that I’m really proud of, and I think I’m going to be able to put that out fairly soon, or next year, so that’s cool. But acting is something that feels much more like doing ayahuasca. It’s really hard work, mentally. (Laughs.) 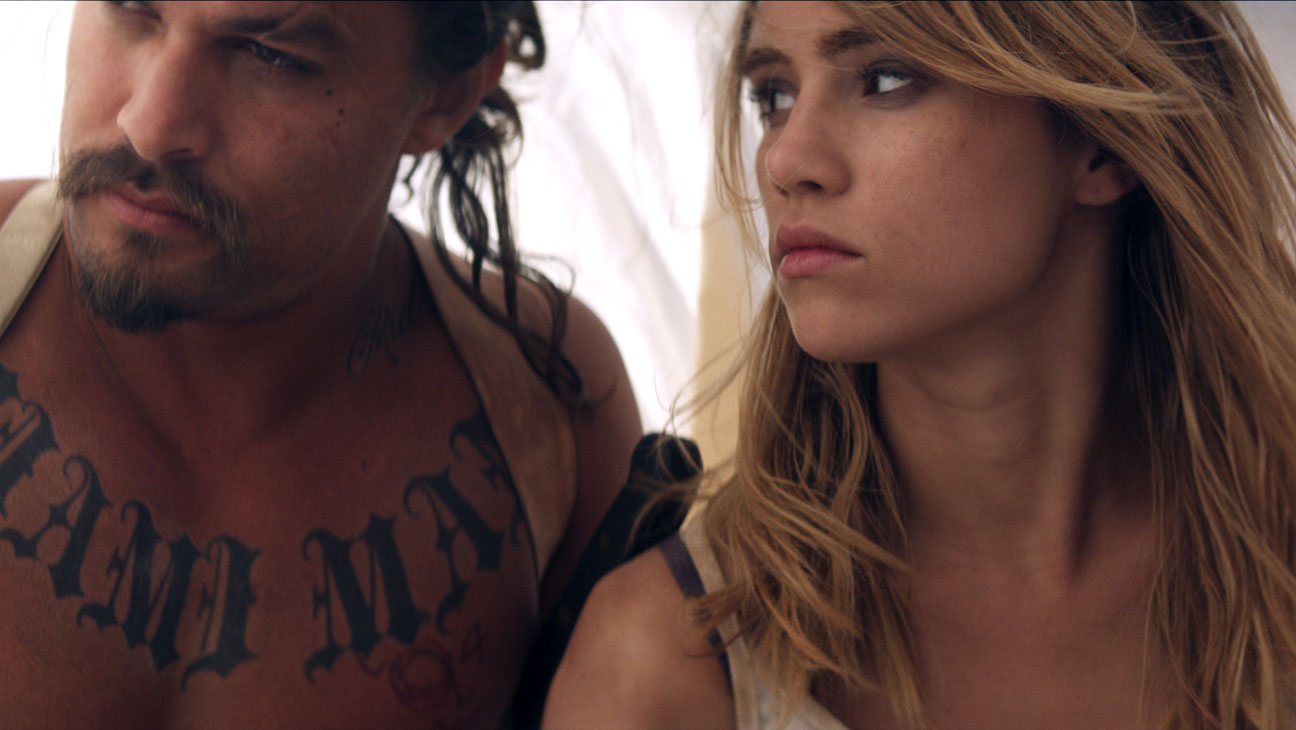 Do you still have bumps and bruises from Ana Lily Amirpour’s The Bad Batch?

I still have a funny arm. I have a scar from where they were sawing [Arlen’s] arm, and it went on for such a long time that I actually have a pretty cool scar from that. I really wanted to tattoo myself with the prison barcode; I was all ready to do it, but then my manager was like, “Absolutely not.” But that would’ve been interesting to still have that.

Did Jim Carrey stay in character the entire time?

He was pretty in character because he came early and camped out in the desert with a camp van. And he’d been out there for a long time. He was completely unrecognizable, and he really had the long nails and everything. So I kind of got to know him more later on, and I had my first actual talk with him after the movie. So it wasn’t a normal experience, but it was really, really cool because it was shocking to see him like that. And seeing him [out of frame] on the last shot of the movie with the sun going down, it’s one of those things you never forget.

I loved your pool scene with Keanu, including the lighting. Was he as advertised?

Yeah, he has the kindest, most gentle energy. He’s just completely lovely. Everyone was completely in love with him.

If you could walk into any studio right now and greenlight a project for yourself, what would you choose?

I really want to make a movie about this musician called Judee Sill, who’s largely forgotten. She was the first person to sign with [David] Geffen, and I’ve always been completely obsessed with her story. She was a sex worker, she committed armed robberies and she just had a really interesting life. She passed away a while ago, but I’ve done a lot of research about her and met friends of hers. So I would love to make a movie about her, and help more people know about her and her music.

Interview edited for length and clarity. Seance is available in select theaters, on digital and on demand May 21.