Summer box office is booming, yet for the first time in two decades, Warner Bros. is largely taking a vacation. Sony Pictures and Paramount, which traditionally have competed heavily in the warm-weather blockbuster season, have generated just 2.2 percent and 4.2 percent of domestic market share, respectively, from May 4 to July 8, with only a few titles left to unfurl.

The dramatic shift in release strategy and competitive landscape has led to two studios — Disney and Universal — generating a whopping 61 percent of domestic revenue in the key summer corridor, domination that would have been unthinkable just five years go. The shift underscores how, rather than compete with juggernaut franchises like Disney’s Marvel and Star Wars films or Universal’s Jurassic World, some studios simply are avoiding the corridor entirely in favor of more year-round programming. Adding to the nerves: instability and uncertainty at nearly every major studio amid management changes and consolidation — save for Disney, whose box office domination has only grown. “We haven’t had something like this in my memory,” says analyst Hal Vogel, CEO of Vogel Capital Management. “People aren’t feeling stable. And Disney is benefiting from this disarray.”

It’s not that moviegoers are abandoning the multiplex: Summer revenue in North America is running at near-record levels — $2.617 billion between May 4 and July 8, according to comScore. That’s nearly a record and a 14 percent uptick from 2017, when summer revenue tumbled to its lowest level in nearly 20 years.

But Disney is largely celebrating at everyone’s expense. The Mouse House’s domestic market share is running at an eye-popping 43.6 percent, led by Avengers: Infinity War ($674.9 million) and Incredibles 2 ($503.8 million), which have become the top-grossing superhero and animated films of all time, respectively, not adjusted for inflation. (Heroes are still Hollywood’s biggest stars; this summer, Disney’s Infinity War, Ant-Man and the Wasp and Incredibles 2 and Fox’s Deadpool 2 account for more than $1 billion in domestic sales.) And while Solo: A Star Wars Story underperformed and will lose money for Disney and Lucasfilm, it still added $210.8 million to the coffers (and scared rivals away from Memorial Day weekend).

Precise international data isn’t available yet, but summer revenue is likewise running ahead of 2017 by more than 10 percent, even with the distraction of the World Cup. Infinity War ($2.04 billion) and Jurassic World: Fallen Kingdom ($1.06 billion) have already earned north of $1 billion, while Incredibles 2 may do the same.

On the flip side is Warner Bros., which often is credited with inventing the modern summer tentpole with 2000’s The Perfect Storm but is instead betting on two end-of-2018 releases — a Fantastic Beasts sequel (Nov. 16) and DC superhero pic Aquaman (Dec. 21) — and is relying this summer on midrange titles like June’s Ocean’s 8 ($240 million). “Warner Bros.’ biggest film of the year is probably Aquaman, [but] where were you going to put it in summer, considering the other superhero films?” asks analyst Eric Handler of MKM Partners. “Strategically, it works out better for them to open in December.”

Indeed, studios have proved in recent years the ability to generate summer numbers in chillier months. (Black Panther opened in February and got to $1.35 billion worldwide; Paramount took the low-budget horror pic A Quiet Place to $331 million in April.) Yet the flight from summer is now making for crowded conditions in other parts of the year. Aquaman opens Dec. 21 opposite Disney’s Mary Poppins Returns, Fox’s Alita: Battle Angel, Sony’s Holmes & Watson and Paramount’s Bumblebee, which hopes to relaunch the Transformers franchise. It’ll be the first Transformers film to open outside of summer.

And Warners is opening two high-profile films in October: Andy Serkis’ Jungle Book movie Mowgli (Oct. 19) and Bradley Cooper’s A Star Is Born, with Lady Gaga. Star was moved from May 18 to Oct. 5, where it will compete with Sony’s Spider-Man spinoff Venom. “It’s now a year-round business,” says Warners distribution chief Jeff Goldstein.

“The good news is you can release blockbusters any time of the year and still have a great year,” says Paul Dergarabedian of comScore. “But if there’s hyper-concentrated box office coming from one studio or two studios, and other studios are sitting out the summer to let those movies play out, then it changes the whole landscape.”

Market share isn’t a reflection of profitability, of course, and the summer isn’t over. On July 13, Sony releases Hotel Transylvania 3: Summer Vacation, which could open to more than $40 million and top Universal’s Dwayne Johnson thriller Skyscraper. And Tom Cruise’s Mission: Impossible — Fallout (July 27) should get to a $55 million debut for Paramount. Warners also has high hopes for shark pic The Meg (Aug. 10) and Crazy Rich Asians (Aug. 15). “These midrange films can do a lot of business,” says Patrick Corcoran of the National Association of Theatre Owners, adding, “Competition is better for everyone.” 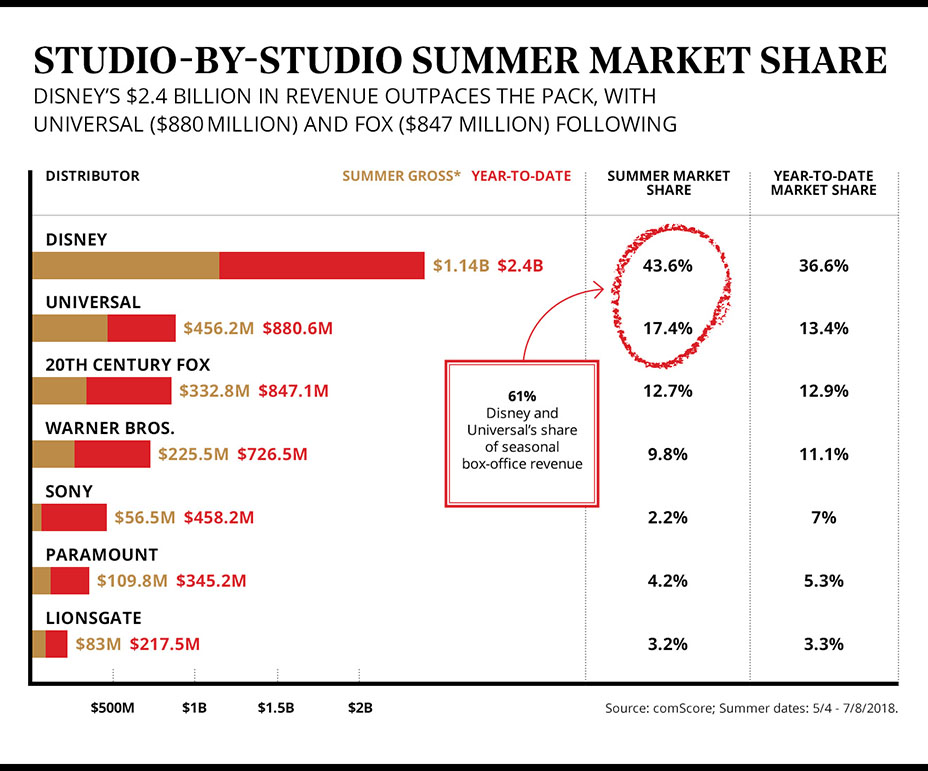 A version of this story first appeared in the July 11 issue of The Hollywood Reporter magazine. To receive the magazine, click here to subscribe.