Suzanna Leigh, who co-starred with Elvis Presley in the 1966 musical comedy Paradise, Hawaiian Style, has died. She was 72.

“My warrior and my heart died at 5:30PM, on her terms,” Natalia wrote. “It was time for JESUS to take her home. The world will forever be a little less light and magical. And my life has now and will be forever changed. I personally died a little today as she was my everything and I will never be the same.”

Her agent, Melanie Novy, said that she died in Winter Garden, Florida.

Leigh had been fighting Stage 4 liver cancer since September 2016, and a GoFundMe page had been set up in her name to assist with medical expenses.

In contrast to the colorful Presley film, Leigh worked in several Hammer horror productions, including The Lost Continent (1968) as a passenger on an ill-fated voyage besieged by carnivorous seaweed, an octopus, a shark and pirates.

In 1971, she appeared in the R-rated Lust for a Vampire, a rushed sequel to director Roy Ward Baker’s The Vampire Lovers. The title vampire was played by Danish actress Yutte Stensgaard. Leigh portrayed a gym teacher puzzled as to why her students kept disappearing.

Other roles were as a stewardess in Boeing Boeing (1965), a pop singer recovering from exhaustion on an island infested with killer insects in The Deadly Bees (1966) and a journalist in The Fiend (1972). She also appeared in the musical comedy Son of Dracula (1974) opposite Harry Nilsson and Ringo Starr. 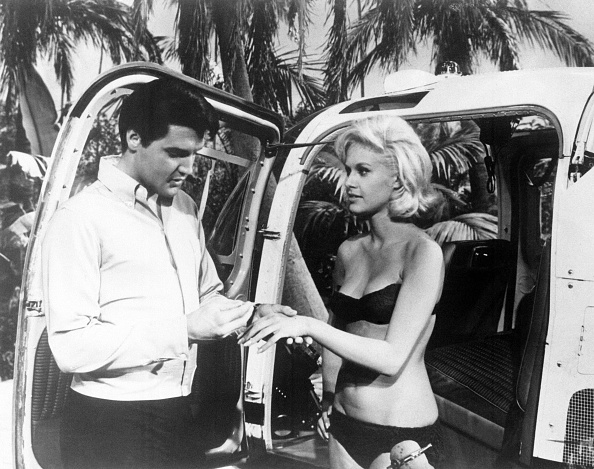 In Paradise, Hawaiian Style, Presley romances Judy Hudson, played by Leigh, and along the way sings nine new songs, including “Scratch My Back (Then I’ll Scratch Yours),” “A Dog’s Life” and “Queenie Wahine’s Papaya.”

“Elvis and I were both under contract to Hal Wallis, who was known as the star maker,” Leigh once recalled. “I remember the day that Hal said that I would be making my next movie with Elvis. I was an incredible fan of his, and then he said you’ll be filming it in Hawaii. Wow. Elvis was a fabulous actor, very underrated by a lot of the conventional theater people.”

She was born Sandra Eileen Anne Smyth in Berkshire, England, in 1945. When she was 11, she took the surname of Leigh after her father told her that actress Vivien Leigh was her godmother. “She said she had known my father, though she had been to hundreds of christenings and didn’t remember mine. It was about 15 years after she’d done Gone With the Wind, and she was stunning, beautiful and slender with dark hair. She said she didn’t mind a bit if I used her name,” she told The Independent in 1999.