Continue to The Hollywood Reporter SKIP AD
You will be redirected back to your article in seconds
Skip to main content
By Carolyn Giardina, Pamela McClintock, Aaron Couch
April 4, 2019 11:03am
Logo text

Early in its presentation at Caesar’s Palace in Las Vegas, Paramount showed off footage from Terminator: Dark Fate, which sees series creator James Cameron return as a creative voice for the franchise the first time since 1991’s Terminator: Judgment Day.

Little is known about the upcoming film from Paramount and Skydance, but the curtain was pulled back a little with Paramount studio chief Jim Gianopoulos describing it as a “return to the intensity, grit, and spectacle of the movies that first captured our imagination decades ago.”

It will follow up T2, ignoring the subsequent sequels and reboots, with Arnold Schwarzenegger returning to star, and original lead Linda Hamilton back for the first time since Judgment Day. They are joined by series newcomers Natalia Reyes and Mackenzie Davis.

Deadpool filmmaker Tim Miller is directing the project, and said it “feels like a true successor to Jim’s iconic film.” Before showing footage, Miller noted the sound and visual effects were still works in progress, asking the crowd, “please be gentle.”

In a clip, two teens find a new female Terminator (or is she an augmented human?) who arrives in Mexico. They think the mysterious woman (Davis) is hurt. When police arrive, the woman attack the police officers. The teens thank her, and she replies, “Don’t thank me yet.”

Later, the mysterious woman and a teen are chased by a T-1000-style Terminator, as Sarah Connor (Hamilton) fires guns. The montage ends with Connor saying, “I’ll be back.”

After the footage, the cast came out, with Schwarzenegger getting the loudest cheers of CinemaCon so far.

“This is really nuts to present the movie …. this is a fundraiser for my next political race,” former California governor Schwarzenegger joked.

Schwarzenegger noted that in T2, Hamilton earned a lot of attention for her physical fitness and strength, and she still has it decades later.

He noted that the franchise has taught him skills he used in politics. He asked, what would he do without catchphrases such as, “I’ll be back. … Fuck you asshole?” and “terminate climate change”? He also made a crack about terminating Gray Davis, the former California Governor whom he defeated in a recall election in 2003.

Hamilton has had many opportunities to return to the franchise over the years, but stayed away until now.

“Only a script, story, cast director like this could bring me back,” said Hamilton, calling it “a once or twice in a lifetime event comes along that you can’t turn away from.”

Cameron launched the franchise with 1984’s The Terminator, which told the story of a young woman Sarah Connor who is being targeted for assassination by a time-traveling cyborg known as the Terminator (Schwarzenegger), because she is the future mother of humanity’s final hope. The franchise reached its zenith with Judgment Day, which until now was Cameron’s final film he was creatively involved with. In the decades since, there have been multiple attempts to continue or reboot the franchise, including Terminator 3: Rise of the Machines (2003), Terminator: Salvation (2009) and Terminator: Genisys (2015). But none of those attempts lived up to Cameron’s legacy and all failed to earn sequels.

Immediately following Terminator, Paramount showed off another fan-friendly property: Sonic the Hedgehog, with Jim Carrey making an appearance, tossing popcorn into the crowd.

“Hi there. Well, I see you saved the best for last,” said Carrey, before footage played.

Using a mix of CG and live action, the film will see Sonic (Ben Schwartz) navigate life on Earth along with his new human friend Tom Wachowski (James Marsden), with whom he joins forces to attempt to thwart the plan of the evil Dr. Robotnik (Carrey), who wants to capture Sonic and use his powers to take over the world. Tika Sumpter also stars. 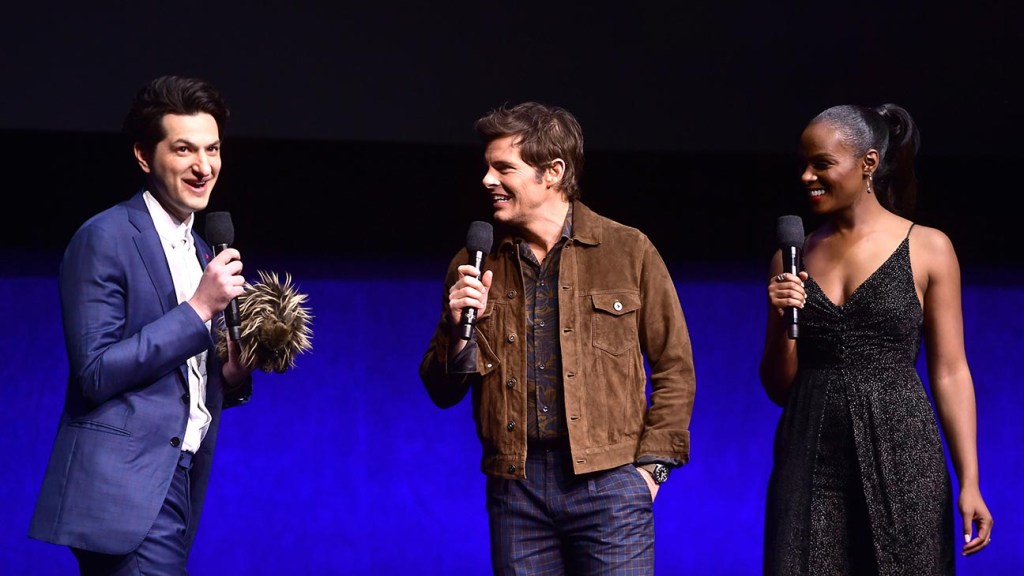 The presentation got yet more cheers thanks to a brief look at Paramount and Skydance’s Top Gun: Maverick, via a sizzle reel that showed a photo of Tom Cruise as Maverick, in a flight jacket, standing at a locker. There was also a photo of him on a motorcycle next to a fighter jet. The film is from Oblivion director Joseph Kosinski. The sequel comes more than 30 years after the 1986 Tony Scott film that made Cruise a global star. The new film is set in the present day and follows fighter pilots as they deal with drone tech making their old style of flying obsolete. The cast also includes Miles Teller, Jennifer Connelly, Jon Hamm, Glen Powell, Ed Harris and Val Kilmer.

Keeping on its sequel kick, Paramount also showed off a first look at the long-awaited Coming to America sequel, which follows Eddie Murphy’s 1988 comedy classic about an African Prince traveling to New York to find a wife. The clip showed of Murphy as Prince Akeem and Arsenio Hall as Semmi.