We’re one week away from the debut of WandaVision, Marvel Studios’ first Disney+ series, and there’s magic in the air. Magic, and perhaps something stranger. Set after the events of Avengers: Endgame, WandaVision, created by Jac Schaeffer and directed by Matt Shakman, finds Wanda Maximoff (Elizabeth Olsen) and Vision (Paul Bettany) happily married in the town of Westview. But their marital bliss is interrupted by forces that cause them to cycle through decades amidst television tropes. And these disturbances, which are set to have a far-reaching impact on the larger Marvel Cinematic Universe, set the stage for the third Spider-Man film and Doctor Strange in the Multiverse of Madness, may be behind Vision’s unexplained resurrection and Wanda’s expanding powers which will inevitably earn her the moniker Scarlet Witch.

While WandaVision isn’t a direct adaptation of any specific Marvel Comics storyline, the teasers and trailers for the series have referenced several plot points familiar to comic reading fans. Those looking to step into the MCU’s introduction to Phase 4 with some background knowledge, and wow their friends and family with WandaVision theories, can power up with this compilation of essential Marvel Comics storylines that look to have the most impact on the series, and perhaps lay the groundwork for the future of the MCU. 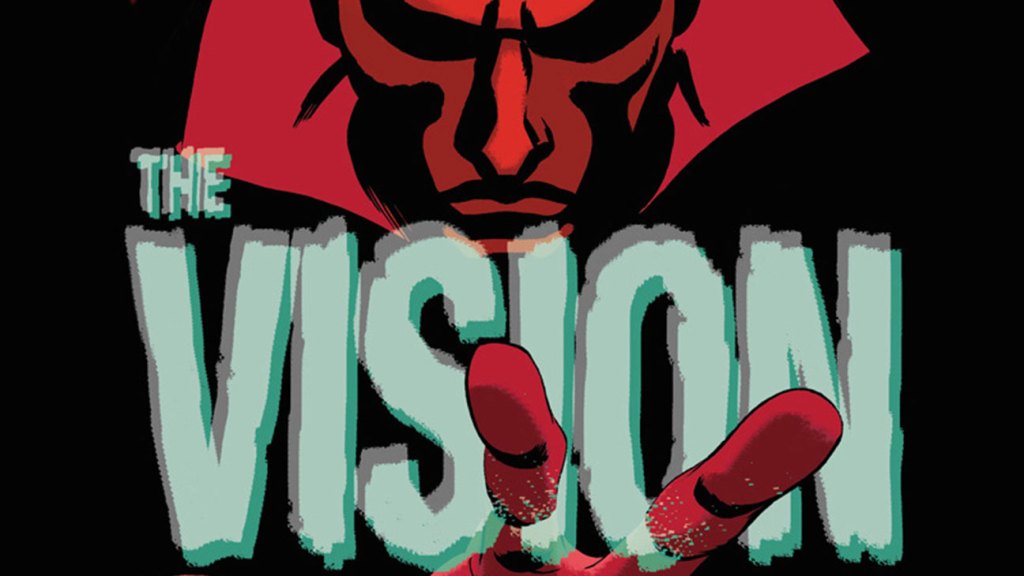 If you make a point to read anything in preparation for WandaVision, make sure The Vision is first on your list. Tom King and Gabriel Hernandez Walta’s Eisner-winning, 12-issue Shakespearean techno-tragedy sees Vision move into a suburban neighborhood in Fairfax, Virginia, with his wife and two children, all of whom he built himself. Just when it seems Vision may finally achieve what he’s always dreamed of, the murders start happening. This starts Vision down a path that could see him destroy the whole world. The series explores Vision’s struggle for normalcy and family, and recounts the numerous attempts at it over his life, including his failed marriage to Wanda, The Scarlet Witch, who plays a significant role alongside her mentor, Agatha Harkness. Less of a superhero book, and more of a domestic thriller about prejudice, existentialism, and what a parent would do to protect its children, The Vision is eerie, funny, sad, and thought-provoking. It’s everything a comic book should be.

Released alongside The Vision as part of Marvel’s All-New, All-Different era, the 15 issues Scarlet Witch series by James Robinson and various artists including, but not limited to, Vanesa Del Rey, Marco Rudy, Chris Visions, and Steve Dillon, firmly situate Wanda Maximoff in the world of arcane horror. The series teamed Wanda up with the ghost of her witchy mentor, Agatha Harkness, to explore disturbances in the world of magic, and the mysteries of her origin. Scarlet Witch sees Wanda meet with her mother, who is revealed to have held the title of Scarlet Witch before her, and reconcile with her brother Pietro, aka Quicksilver. Not only is this series a refreshing departure from traditional superhero storytelling, it also provides an intimate look at Wanda as she comes to terms with her own powerset and what it means to be a witch in a world of Avengers.

The end of an era, and the beginning of another. Avengers Disassembled broke the rule book and set the stage for a Marvel Universe that’s still facing the ramifications to this day. To begin his lengthy tenure on Avengers, relaunched as New Avengers after this arc, Bendis made the controversial decision to have Wanda destroy the Avengers. The result saw Vision used as a weapon against his teammates, and killed by an enraged She-Hulk. It’s Doctor Strange who first becomes aware that the destruction is Wanda’s doing, and decides that she has to be taken down or else her reality-warping powers would destroy the world. While Strange eventually puts Wanda in a coma rather than killing her and puts her in the care of Professor X, and her father Magneto, the storyline cemented the notion of Wanda’s mental instability, caused by the “death” of her children (we’ll get to that). With the classic team disbanded and Avengers Mansion destroyed, Bendis’ arc sets the stage for the next story on our list.

“No more mutants.” That’s how it ended. But it began with Professor X admitting that his telepathy could no longer keep Wanda’s reality-warping abilities in check. The Avengers and the X-Men are forced to decide what must be done about Wanda. Wolverine says what no one else wants to say, she has to be killed. But before an action can take place, Scarlet Witch, on the advice of her brother Quicksilver, rewrites reality so that every hero gets their wish and lives in the world of their dreams, a world ruled by her father and siblings under the House of Magnus. When the false reality is revealed and Magneto sides with the Avengers and X-Men, killing Quicksilver in the process, Scarlet Witch proclaims “no more mutants” depowering most of Earth’s mutant population and ensuring that no more mutants are born. Scarlet Witch disappears in the aftermath, and becomes one of the biggest threats in the Marvel Universe, setting the stage for the next decade of Marvel events.

Redemption for Wanda eventually came, and it was due to the actions of the Young Avengers. Cassie Lang requested the Young Avengers search for the Scarlet Witch in the hopes that she could restore mutants’ powers, and more pressingly resurrect her father, Scott Lang, who was killed during Disassembled. Their quest leads them to team up with Magneto, also searching for Wanda, and the discovery that team members Wiccan and Speed are reincarnations of Wanda and Vision’s children. The miniseries reveals that Wanda was not responsible for her actions in Disassembled and House of M, but had instead been influenced by Doctor Doom, who sought Wanda’s magical abilities for himself. After defeating Doom and regaining her powers, Wanda leaves to define herself as someone independent from Magneto, Quicksilver, and Vision, which eventually leads her to join the Uncanny Avengers and sets the stage for her regaining full control of her powers in James Robinson’s series.

Vision and the Scarlet Witch (1982), Bill Mantlo and Rick Leonardi

This four-issue miniseries charts the beginning of Wanda and Vision’s marriage following their retirement from the Avengers. Despite no longer being on the Avengers roster, trouble still follows them to their new home in the suburbs of New Jersey. Though brief, the miniseries’ first issue is set during Halloween, the holiday which seems to be a key element in WandaVision. And its last issue establishes Magneto as Wanda’s father for the first time, which of course would go on to greatly impact Scarlet Witch and Quicksilver’s identity in the modern era.

The second volume of Vision and the Scarlet Witch ran 12 issues, and really shook things up for the couple. In this series, with the help of her mentor Agatha Harkness, a previously established ally of the Fantastic Four, Wanda uses the mystical powers of New Salem to become pregnant with Vision’s children, against all odds. This pregnancy is revealed to the Scarlet Witch by none other than Doctor Strange, further establishing a connection between the two characters. This series once again sees Wanda and Vision get into trouble on Halloween night, something of a reoccurring theme, and sees them deal with prejudices in their neighborhood stemming from the marriage, which serves as an interesting precursor to a later exploration of some of those same themes in The Vision. While the series is pretty traditional in terms of superhero vs supervillain plots, there is a sitcom element to the series as Wanda and Vision deal with normal couple concerns like bills, family planning, and hosting Thanksgiving.

In what was the Scarlet Witch and Vision’s most controversial storyline, until Avengers Disassembled that is, John Byrne ended the couple’s domestic bliss. The arc saw a global spy agency kidnap Vision and take him apart in the hopes of gaining international secrets. When Vision is rebuilt, his humanity is gone, resulting in a chalk white appearance and the annulment of his marriage to Wanda. To make matters worse, Wanda and Vision’s children, Tommy and Billy, are revealed to actually be just shards of energy created by Mephisto, the Marvel Universe’s version of the devil. These events caused Wanda to spiral, and perhaps would have brought ruin on the Avengers earlier if not for Agatha Harkness who erased Wanda’s memory of her children. But she would eventually remember and the disassembling would be begin. 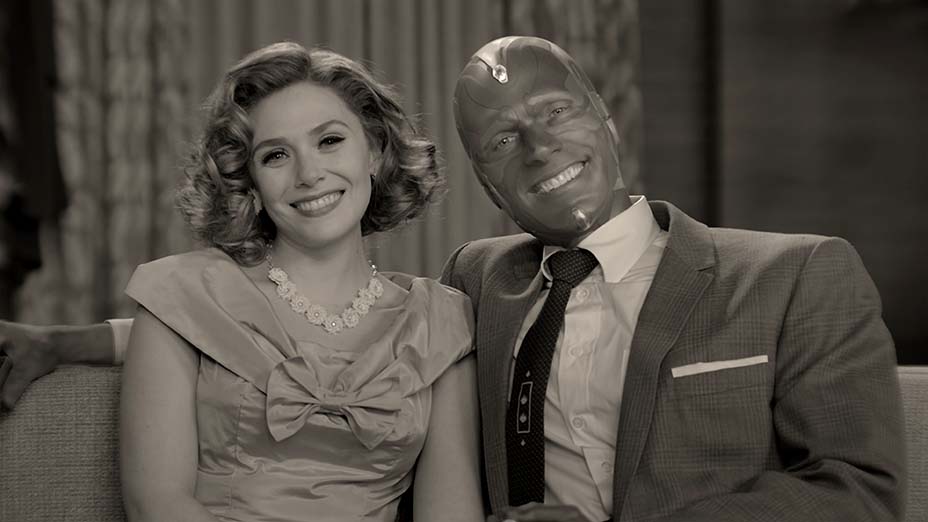 There’s a myriad of narrative possibilities that WandaVision could head in, but with teases of twin boys, a mysterious neighbor, Agnes (Kathryn Hahn), who could very well be Agatha Harkness, and the enormity of grief Wanda has already suffered in the MCU, all signs to point to at least some implementation of Wanda’s tragic history and madness. And perhaps an introduction of mutants, Mephisto, Doctor Doom, and Young Avengers will set the stage for Wanda’s rebirth and larger story somewhere down the road. Phase 4 of the MCU begins now!