It’s the season of the witch. And with it come changes, a transition from the past to the present. In other words, it’s the perfect time for Zoe Lister-Jones’ The Craft: Legacy, Sony Pictures’ and Blumhouse’s sequel to the 1996 horror-fantasy, The Craft. While the original is beloved for many reasons, and validated many ’90s teens’ goth and Wicca phases, or enduring lifestyles for that matter, Jones takes the idea of legacy to heart, introducing a new coven of young women in a space that feels progressively modern in its social ambitions.

The release of the trailer earlier this month proved to be somewhat divisive among fans of the original, and the film itself could find itself at the same crossroads with older audience members, given fandom’s enduring difficulty of letting things go and accepting change. Regardless of that, The Craft: Legacy lends itself well to conversations about nostalgia, cult status, and horror geared towards younger audiences.

The Craft: Legacy begins in a not entirely dissimilar way to the first film. Lilly (Cailee Spaeny) moves to a new town with her mother (Michelle Monaghan) who has quickly, too quickly, fallen in love and agreed to move in with her boyfriend (David Duchovny), a father of three boys who has very specific, and outdated ideas of masculinity, ie. toxic. After starting her period in class Lily quickly finds herself ostracized by her peers, but even more quickly embraced by three girls, Tabby (Lovie Simone), Frankie (Gideon Adlon), and Lourdes (Zoey Luna) who are practicing witches, respectively representing fire, air and earth. They believe Lily is their fourth, representing water, and making them an official coven. 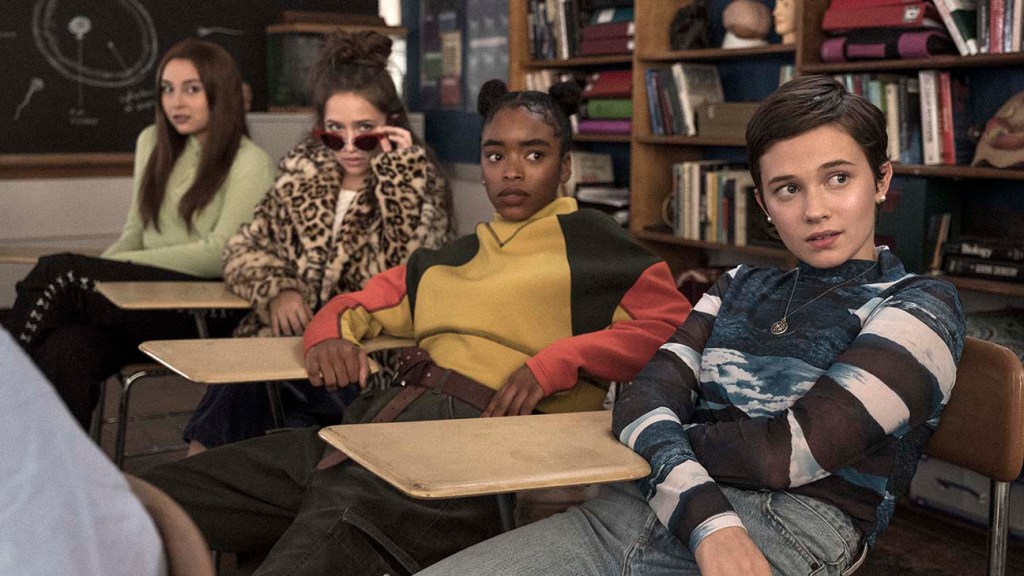 What’s immediately apparent in this sequel and the relationship between the four girls, and their high school peers, is how much Jones embraces Gen Z. It comes down to more than Twilight references and a soundtrack of musicians far removed from the Gen X grunge of the original, which will probably make you feel old. It’s a general acceptance of progressive practices that those who came of age in the ’90s or early 2000s couldn’t fathom being the status quo during their high school years. For example, Lourdes is a trans woman, like breakout actress Zoey Luna, and the film references that fact without othering that aspect of her identity or offering it up as ammunition for the school’s mean girls and guys. Compared to the way Rochelle (Rachel True) was treated in the original film and ostracized by her peers solely for being Black, the only Black person in the film in an incongruous example of tokenism in a film otherwise generally advanced for its time, Lourdes’ characterization and how others interact with her feels like a significant and meaningful step in inclusivity within the horror space.

Many critics and fans have focused on the feminism at the center of The Craft over the years, and its serious evaluation of aspects of suicide, class, and body image. What’s interesting is that the original film, directed by Andrew Fleming and co-written by Peter Filardi, approaches feminism from a male perspective by default. It’s not my place to discuss the successes or failings of that, but what is apparent from The Craft: Legacy is its ambitions towards intersectional feminism, which is arguably emboldened by the fact that most of the film’s crew, editor, production designer, cinematographer are women.

There is a solidarity found in femininity within the film, one that transcends gender and sexuality, and something the film’s male lead Timmy (Nicholas Galitzine) comes to terms with, even as the toxic masculinity of his peers and mentors attempt to pull him in another direction. Where the first film saw female friendships fractured and irrevocably damaged, the sequel finds female friendships maintained, a source of strength rather than weakness. While there are beats obviously reminiscent of Sarah (Robin Tunney), Bonnie (Neve Campbell), Nancy (Fairuza Balk), and Rochelle’s misadventures in magic, The Craft: Legacy handles its coven with a different goal in mind: a unified front against the power-hungry patriarchy.

The consideration of feminism and men who either serve as allies or archaic symbols fearful of their own perceived loss of power is not entirely dissimilar from Blumhouse and Universal’s Black Christmas (2019) reimaging directed by Sophia Takal and co-written by April Wolfe. Much like The Craft: Legacy, the prerelease conversation surrounding Black Christmas was co-opted by older audiences lamenting the fact that the new film wasn’t the old film, fueled by a tone-deaf and inaccurate tweet from horror host and critic Joe Bob Briggs who said “what I love about directors from the 70s and 80s is that they had no political ax to grind, no message, no social justification for horror. It was just ‘get a load of this great story.’ I don’t want to be told how to watch a movie.”

It’s common for movies to be accused of being “woke,” but the word has become baity and gentrified — and these criticisms fail to understand that times change, as do audiences. The themes and values that led us to the genre are likely different from our parents, just as they’re different for today’s current crop of teens. That’s ultimately how horror endures and broadens its audience.

The Craft: Legacy, much like Black Christmas, or even Jennifer’s Body (2009) before it, that film for my generation, may not have been made for you. That fact doesn’t depreciate its value.

None of this is to say that every aspect of The Craft: Legacy works. There are horror elements that deserved to be stronger, and when it comes to Duchovny’s character and his sons there are skeletons of great ideas that needed fleshing out. But my estimation of these flaws, or really anyone’s outside of the target teen demographic ultimately feel moot. As young fans, be it of The Craft or any other film that emerged as a cult classic through our lens, we learned to look past the faults because we felt the value of the film was greater despite them. When it comes to new horror, geared specifically towards teens and speaking in their language, it’s helpful to remove our own rose-colored glasses and reckon with the fact that the things we love weren’t always beloved.

There’s a reason why cult classics are, in their very essence, “cult.” The Craft received mixed reviews upon release, and even now, 26 years later, it still sits at a 55 percent Rotten score on Rotten Tomatoes. Yet none of that lessened its impact for those who embraced it. I have no idea if The Craft: Legacy will be embraced in the same way, but it is a film primarily aimed at teenage girls today, and it’s their validation, their own opportunity to give it the cult status or not, that matters most. This isn’t our Craft, and that’s ok. There’s power to be found in accepting that.

Why 'The Craft: Legacy' was the "Missing Piece" for Cailee Spaeny