Thor: Ragnarok is not a villain-centric narrative. Hela (Cate Blanchett) is primarily there to send Thor (Chris Hemsworth) and company on an outrageously entertaining intergalactic road trip and forcibly fix Thor’s hammer dependency. In certain ways, her character is even repetitive and unoriginal, but this is not a criticism — it is progress.

Women made up just 32 percent of speaking characters in 2016 on movie screens, according to a recent study, and when women do show up, they are often thrown into one of a handful of narrative roles. There are more outliers to this trend than there used to be, yes, and the stereotypes have evolved over time, but underneath it all, an irksome trend remains: the idea that women are “other.”

Commentators lamenting female representation are not saying there is a picture of womanhood that movies are missing or misrepresenting, but rather a lack of diversity, not just regarding race and age, but personality and narrative role. Real-life women are not aliens from Venus or in possession of preternatural powers (“female intuition”), they are first and foremost people, just like men, and that’s the part that films quite frequently have trouble with — featuring a woman doesn’t mean you need to drown her character in feminine tropes.

In 2010’s Iron Man 2, Black Widow (Scarlett Johansson) became the first major female character in the Marvel Cinematic Universe who was not introduced as a love interest. From her penchant for thigh-crushing and seducing targets to her fertility-centric Age of Ultron subplot, she is a walking collection of “Uniquely Woman Things.” When just having a female character join the boys’ club and do action stuff was considered a welcome change, it was easier to swallow that pill. But that was then and this is now; it’s time for us to keep moving forward. With Hela, Ragnarok represents a step forward.

When it comes to villains, female representation is particularly underwhelming. I don’t have any statistics to cite on this one, just a lifetime of moviegoing experience. While there seems be a slowly growing number of diverse female protagonists, the same cannot be said for villains. If you do a Google search for lists of the best movie villains, those that feature women at all overwhelmingly cite characters that showed up onscreen 20-plus years ago — Nurse Ratched, the Wicked Witch of the West, Annie Wilkes.

Meanwhile, the crafting of male villains seems to have reached new heights in the past few decades. Just think of the 2006 to 2008 stretch, where three best supporting actor Oscars in a row were won for playing villains now often listed among the greatest ever: No Country for Old Men‘s Anton Chigurh, The Dark Knight’s Joker and Inglourious Basterds‘ Hans Landa.

There seems to have been a slight uptick in the quantity of big-screen female villains of late, but the quality has been generally abysmal. Most have been eminently forgettable, such as Maya Hansen of Iron Man 3, or buried in box-office flops such as this year’s The Mummy. Those that remain have been arguably even worse. On one hand you have the hyper-sexualized likes of Suicide Squad’s Harley Quinn, and on the other you have comedic punching bags, like Julianne Moore’s Poppy Adams of Kingsman: The Golden Circle. 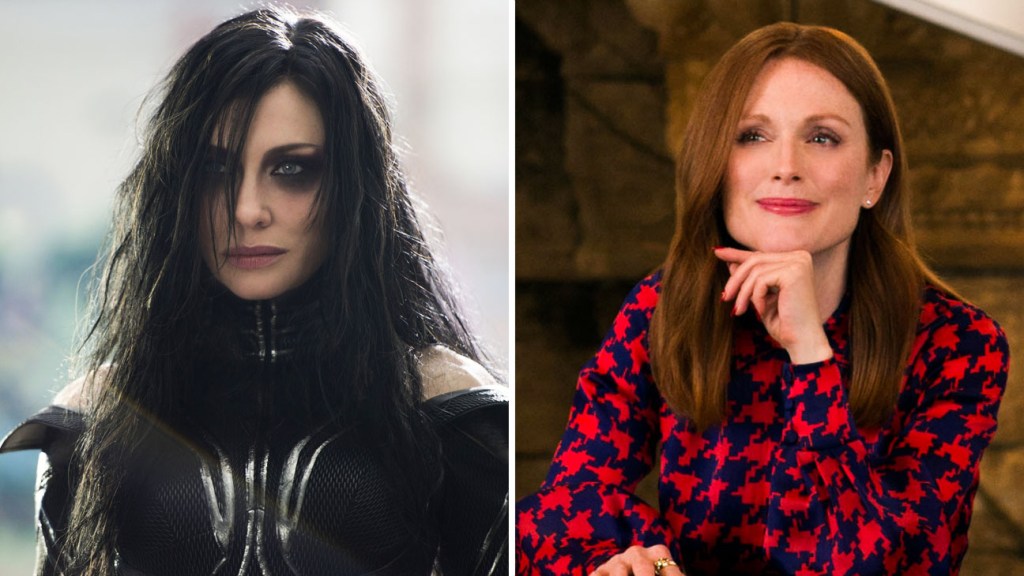 It’s not that female villains shouldn’t ever be sexy or comedic. But when, on the rare occasion female villains do show up — and not as someone’s lackey, like the replicant Luv in Blade Runner 2049 — they’re sex objects or laughably bad at what they do. This perpetuates certain ideas and attitudes about what women can and cannot be, about what their limitations supposedly are.

Hela might not rank among the great cinematic villains of our time, but she’s undeniably good at what she does. She promises destruction and she follows through. Perhaps more important, though, her villainy is not coded as uniquely feminine. Not once does she use womanly wiles, or female intuition or any of that mumbo jumbo. She uses swords. Her costume is form-fitting, yes, but not extensively revealing or less practical than those worn by the men. She’s not Harley Quinn, dressing for battle in an innuendo-laden crop top, booty shorts and high heels, or Poppy Adams, who is downgraded from evil mastermind to total joke over the course of the film. Hela’s actions leave significant consequences that will be felt throughout the MCU. She matters.

Character-wise, she’s basically an extreme version of Loki with slight modifications, even in costuming and physical appearance, though she also borrows the Winter Soldier’s smoky eye. She doesn’t say or do anything that would seem strange or comedic coming from a male character, because the bottom line is that women are not fundamentally different in that sense — the difference comes from societal treatment and perception. Ragnarok itself plays with this idea in the exchange between Thor and Valkyrie (Tessa Thompson) when Thor fanboys over the Valkyries and admits he wanted to be one until he realized they were all women, implying that he could not determine their sex from the tales of their actions alone. From her character to her costuming to even the way the camera follows her — the arguably lingering toes-up once-over she gets when she is first introduced is repeated almost exactly with post-haircut Thor — Hela isn’t crafted to be some uniquely “feminine” portrait of villainy, she’s a supervillain who also happens to be a woman, and there is a lot to be said for that.