Thor: Ragnarok borrowed heavily from the comic book storyline “Planet Hulk,” not least of which when it comes to the movie’s setting or the sight of a Hulk in full-on gladiatorial outfit. Who knew that he’d look so good in warpaint and helmet? The answer, it turns out, is “comic book fans.” But “Planet Hulk” differs from Ragnarok in many ways — not least of which being the complete absence of Thor. So how did the comic book version of Hulk’s stay on Sakaar end, anyway…?

Actually, before we deal with the end, it’s important that we talk about how the comic book Hulk ended up on Sakaar in the first place. Unlike the cinematic version of events, the comic book Hulk was, in essence, exiled to the planet by a collective of superheroes that included Iron Man, Doctor Strange and Professor Xavier of the X-Men. Deemed too dangerous to stay on Earth, the Hulk was tricked into space with a fake mission to help humanity, only to discover that he was never intended to return — but even the heroes’ plan to leave him on a peaceful planet went awry thanks to an errant wormhole, leaving him crash-landed on Sakaar and drawn into the gladiatorial arena of the planet’s despot, the Red King.

(One difference between comic and movie is that, in the comics, the Hulk doesn’t voluntarily become a gladiator; he’s forced into it by his captors, fueling his rage in advance of where the story eventually goes.) 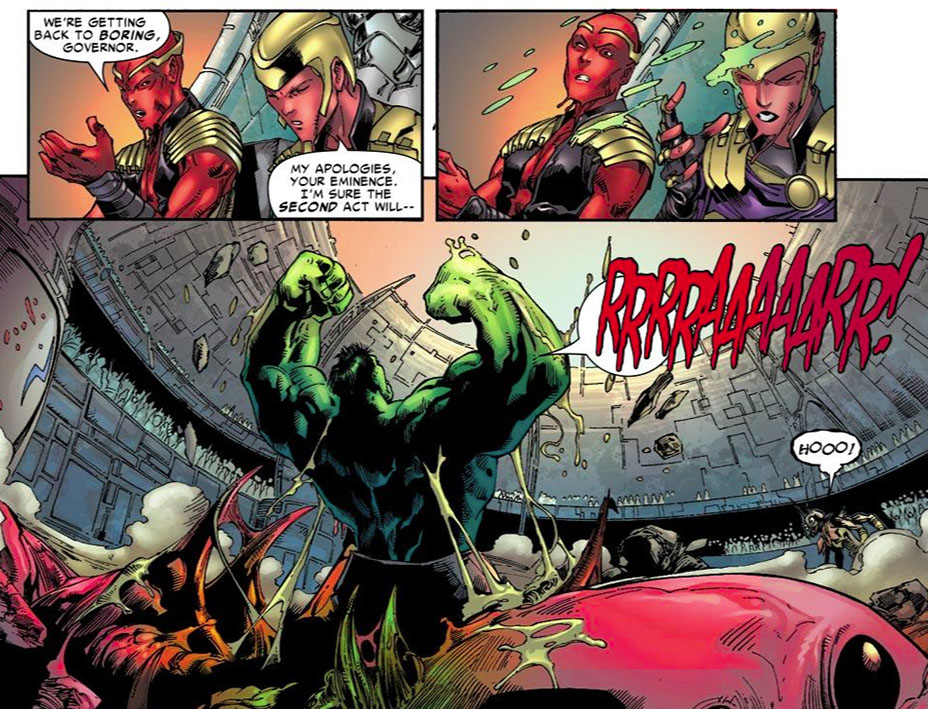 Many of the Hulk’s fellow comic book gladiators will be familiar to those who’ve seen Ragnarok — both Korg and Miek debuted in the “Planet Hulk” story (published from 2006-07), alongside other aliens that would form a close-knit group of advisors and lieutenants to the Hulk as the story progressed. As in Ragnarok, the Hulk essentially leads a revolt against the powers that be, but unlike the movie, the Hulk of “Planet Hulk” doesn’t leave the planet midway through the process. Instead, the Hulk replaces the Red King as the ruler of Sakaar and unites the planet into an uneasy peace alongside his new wife, Caiera, who becomes pregnant with his child.

If that seems like a suspiciously happy ending, don’t worry — things very quickly went wrong. The ship that brought the Hulk to Sakaar self-destructed, destroying a city and killing the Hulk’s wife in the process. Grief-stricken and, of course, angry, the Hulk heads an invasion force consisting of his fellow gladiators to Earth to seek revenge on the heroes who sent him into space in the first place, leading to the 2007 series World War Hulk. 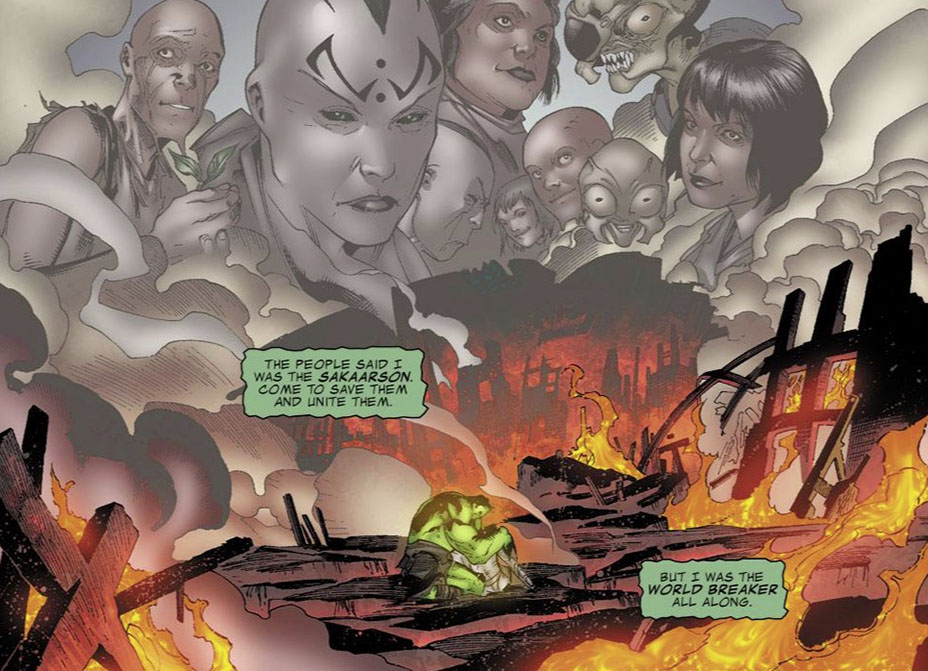 As that title suggests, the fight between the Hulk and his forces — now calling themselves the Warbound — and humanity is pretty brutal, and destructive. Across the five issues of the main series and countless tie-in issues of other Marvel comics of the period, the Hulk or the Warbound faced the Avengers, the X-Men and other familiar faces, and smashed them all.

Before he could complete his plan of destroying New York City and kill the specific heroes who sent him into space, the Hulk learned that things weren’t exactly as they seemed; the destruction of his ship and subsequent death of his wife, it turned out, was part of a plot by those on Sakaar loyal to the Red King, and not the fault of the heroes at all. The discovery drove the Hulk into an even-greater rage, causing him to radiate energy that threatened the entire planet — making it a particularly good time for Iron Man to launch an attack using a number of satellites that temporarily depowered him and forced him back into Bruce Banner form. 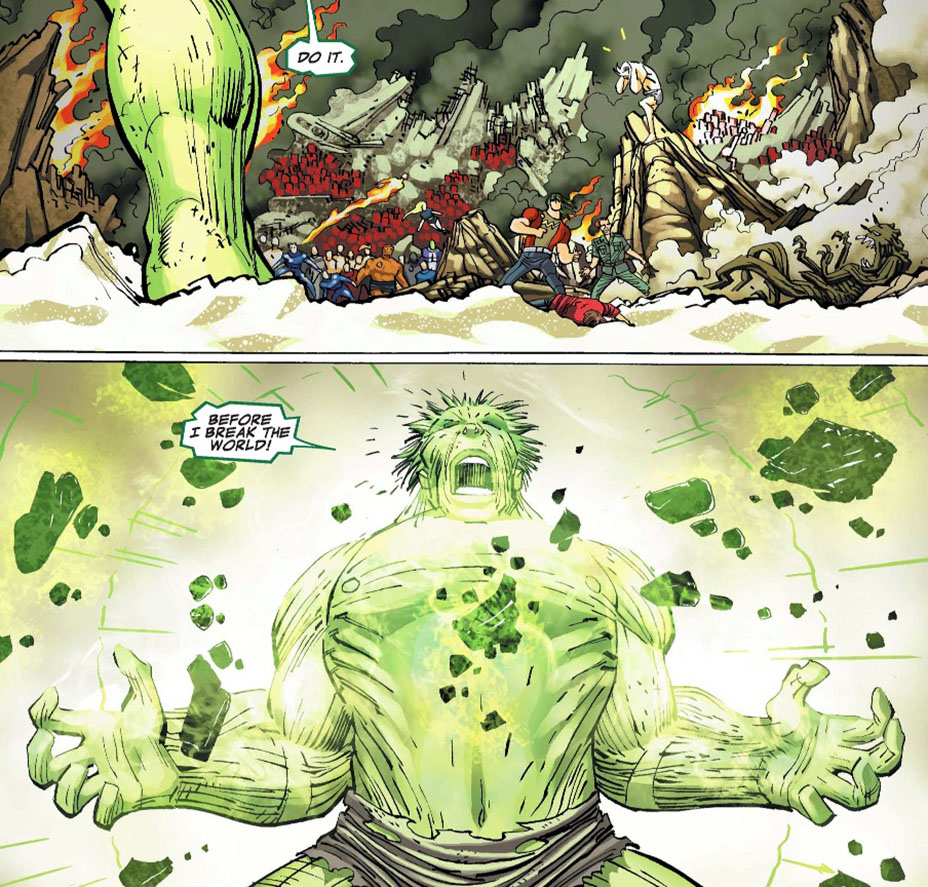 All things considered, Jeff Goldblum’s Grandmaster — and the entire Marvel Cinematic Universe Earth — had a lucky escape. But then, Robert Downey Jr.’s Tony Stark would have never shot the Hulk into space in the first place. Probably.

'Thor' Composer Knew Marvel Scores Sounded Similar, So He Decided to Change That