Ahead of the release of Thor: Ragnarok in theaters, Marvel Entertainment is teasing the return of the classic incarnation of the comic book God of Thunder — with a new look that ties in closely with Chris Hemsworth’s cinematic makeover.

The comic publisher released previously unseen concept art by Russell Dauterman for a revitalized Thor Odinson, with a design that debuted in last week’s Thor No. 700. As with Hemsworth’s Ragnarok look, this Thor has untraditional short hair — which the character has sported in comics since last year’s Unworthy Thor miniseries — but he also has a golden arm, to replace the original one he lost to the Dark Elf Malekith in a 2014 comic book.

(He’s not been without an arm all this time; in current comic continuity, he has a replacement constructed from the same Uru metal that his enchanted hammer is made of.)

The new-look Thor hasn’t officially appeared in the comic books yet; his Thor No. 700 appearance was part of a sequence where a dying character sees images from the future. (Jane Foster, who’s been acting as Thor since 2014’s Thor No. 1, is still technically the Thunder God du jour in comic continuity, although the current storyline is called “The Death of the Mighty Thor.”) 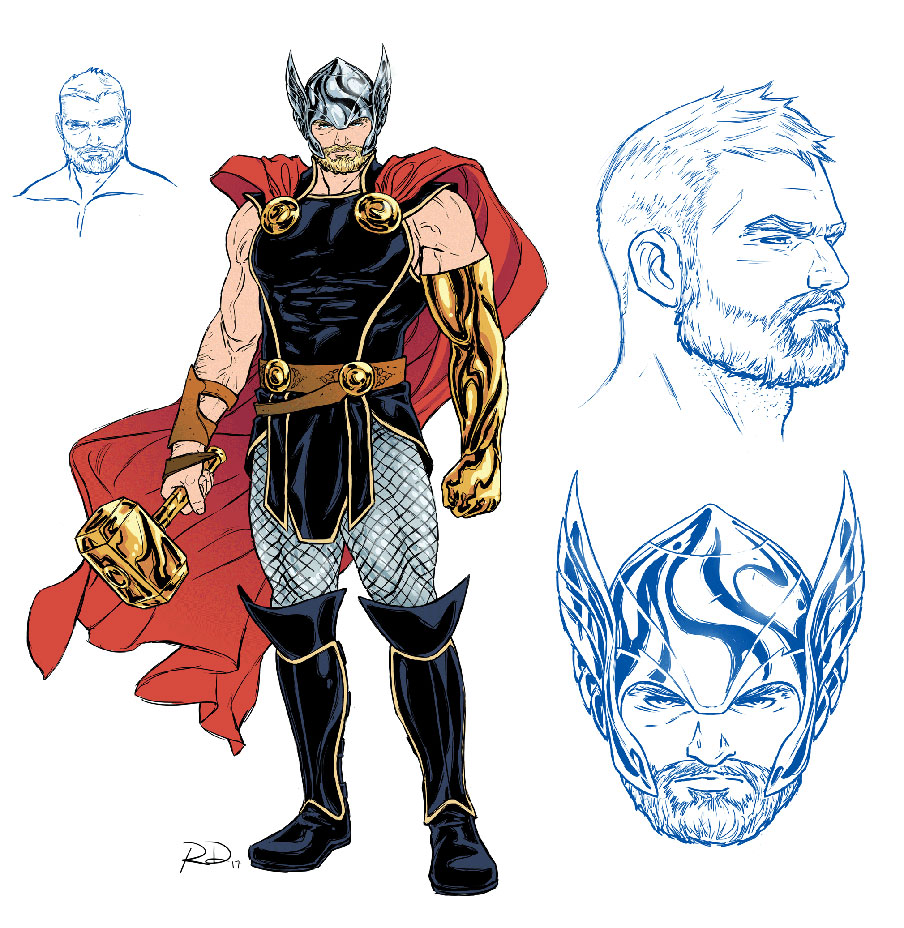 The short-haired Thor isn’t the only Ragnarok-friendly element of the flash-forward sequence; Loki and the Valkyrie both make appearances, while movie fans might also recognize the sight of the Infinity Gauntlet on Loki’s hand. (Thankfully, no one would be mad enough to let that happen onscreen.) But what could it all mean?

“You see a lot teases for upcoming stories here,” Thor writer Jason Aaron said in a statement from the publisher. “Some of those stories will play out in the pages of Thor. Others will play out elsewhere, some across multiple titles. Between Thor No. 700 and [September’s] Marvel Legacy No. 1, I’m really setting the stage for the biggest stories I’ll be doing for Marvel in 2018. Probably the biggest stories I’ve ever done for Marvel, period. You see a lot of that set-up here, and I’m beyond excited for everybody to see where it’s leading and what it means for Thor, not to mention the rest of the Marvel Universe.”

But will any of it feature a buddy-comedy team-up with the Hulk? We can but hope. Thor No. 700 is in comic stores and available digitally now.

'Thor: Ragnarok' — What the Critics Are Saying