Over the weekend, a few unexpected stars showed up in Thor: Ragnarok. And no, it wasn’t a surprise appearances from Robert Downey Jr. or Chris Pratt.

Early in the film, Thor (Chris Hemsworth) returns to his home in Asgard to discover his brother Loki (Tom Hiddleston) is posing as their father Odin (Anthony Hopkins) and enjoying a play. And if you looked closely under the silly wigs and makeup, you’ll recognize the actors in the play were Matt Damon as Loki, Chris Hemsworth’s older brother Luke Hemsworth as Thor and Sam Neill as Odin.

The play-within-a-movie got huge laughs at Ragnarok‘s Hollywood premiere last month (where Damon was in attendance), and signaled that the film wouldn’t mind poking fun at Marvel’s ever-sprawling story. The play essentially recapped the ending of 2013’s Thor: The Dark World, in which Loki seems to sacrifice himself, only to later be revealed to have taken Odin’s throne by impersonating him.

“I wanted to have an interesting way of returning to see Loki as Odin. Because I don’t know if people would remember him from the end of Thor: Dark World as sitting on the throne,” director Taika Waititi tells The Hollywood Reporter.

Waititi and his team considered first seeing Loki at a wine tasting or having his portrait painted, but they finally settled on the idea that Loki had written a play about himself, because it’s “the most narcissistic thing Loki could do,” notes the director.

Going into Ragnarok, the Thor franchise had never been as beloved by audiences as Marvel Studios properties like Guardians of the Galaxy or Captain America — and the movie has fun skewering everything from Thor’s rather ridiculous powers (such as swinging a hammer so fast it makes him fly) to lines from Joss Whedon’s Avengers: Age of Ultron (particularly, that “the sun’s getting real low” lullaby that Black Widow uses to make the Hulk turn back into Bruce Banner). 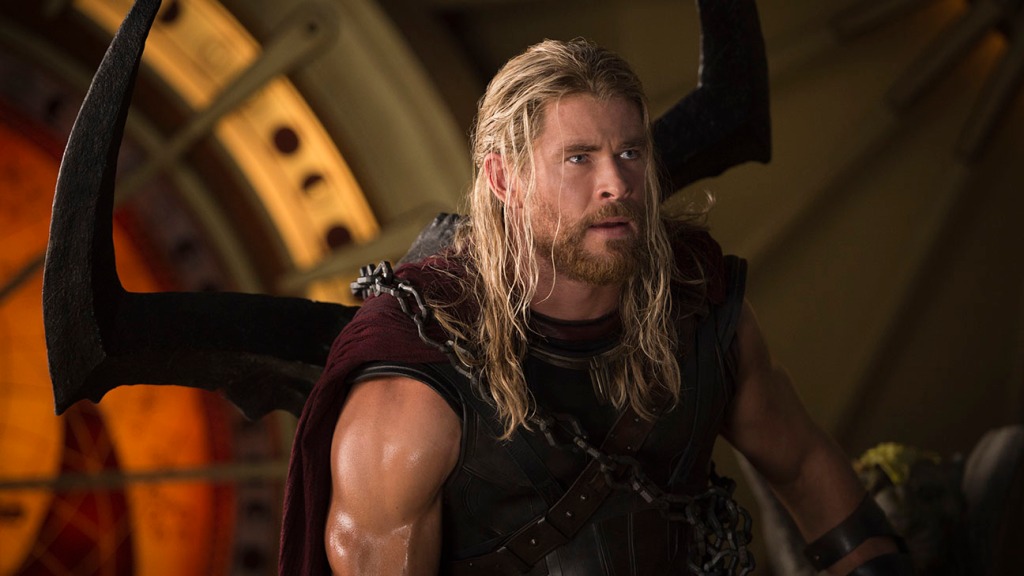 But Waititi sought to present those references in a respectful way meant to be in good fun.

“We were making fun of what happened before, but also honoring the groundwork that Thor one and two had done for me,” says Waititi.  “If it were not for those two films, I wouldn’t have been able to be as irreverent and have as much fun as I did with this one. I would still be setting up characters and setting relationship. It was also to say to the everyone who loves those movies and who has come in expecting a certain thing from this film that this is the moment where it ends, at this play.”

The casting didn’t come together until later in the process, and a number of big names were tossed around. In time for reshoots, Hemsworth brought on his brother Luke as well as his pal Damon, while Waititi was friendly with Neill, who was in the director’s 2016 feature Hunt for the Wilderpeople, and got him to join the fun.

The casting was such a closely guarded secret that screenwriter Eric Pearson wasn’t told who had been cast until July’s San Diego Comic-Con, when he got a moment alone with Marvel Studios executive Brad Winderbaum.

“It was one of those, ‘Don’t tell your wife. You cannot tell anyone,’ ” recalls Pearson. “Brad took me over to the side, and showed me the picture [of Damon] in full costume and I lost my mind.”

Pearson has worked on top-secret projects like the upcoming Avengers: Infinity War, and notes that he’s “always under the sniper’s laser” of secrecy.

“But that stunt casting was even more crazy than anything,” he adds.

Of course, bringing in an A-lister like Damon, who previously had a secret role in Christopher Nolan’s Interstellar, could come at the risk of distracting the audience.

“It’s not a scene that is so important that cameos are going to be distracting. It was just a little bit of flavor. It was acknowledging the other films and kissing them goodbye in a fun way, with fun people,” says Waititi.

The 'Thor: Ragnarok' Ending Vs. the Comics