Despite the title, Thor: Ragnarok doesn’t actually draw much from the Thor comic book storyline of the same name from 2004. Instead, the movie is drawn from a variety of comic book sources, each bringing a different element of the fall of Asgard — and pointing toward the future of the movie series.

First, a quick recap of where the film left off. Ragnarok actually came to pass, with Thor (Chris Hemsworth) allowing Surtur to destroy Asgard in order to stop Hela (Cate Blanchett). Thor learns that Asgard is not a place, but a people, and they sail off into space, looking for a new home.

The discrepancy with the comic book Ragnarok (which ran in Thor Nos. 80-85) is actually relatively easily explained: while Taika Waititi’s Ragnarok has certain narrative requirements that rule out the movie living totally up to its apocalyptic title — Thor and the Hulk both being needed for next year’s Avengers: Infinity War, if nothing else — the comic book storyline of the same name exists to literally put the entire Thor mythos to bed, at least temporarily. (After it was published, Marvel stayed out of the Thor business for three years, until the launch of a new Thor series in 2007.)

The plot of the comic book Ragnarok is, in essence, relatively simple: Loki kills almost everyone in Asgard and then Thor hits the reset button with the (unwitting) assistance of Surtur — that part, at least, is consistent with the movie — destroying not only Asgard itself, but each of the other “Nine Realms” of existence with the exception of Earth, in what is melodramatically called a “final act of cosmic ritual!” The series ends, temporarily, with Thor announcing, essentially, that he’s going to have a nap for a while, before disappearing for years: “I’ll lie still and silent. Strip my mind of thoughts…. I shall close my eyes and breathe deep the slumber of gods…. For awhile, at least….” 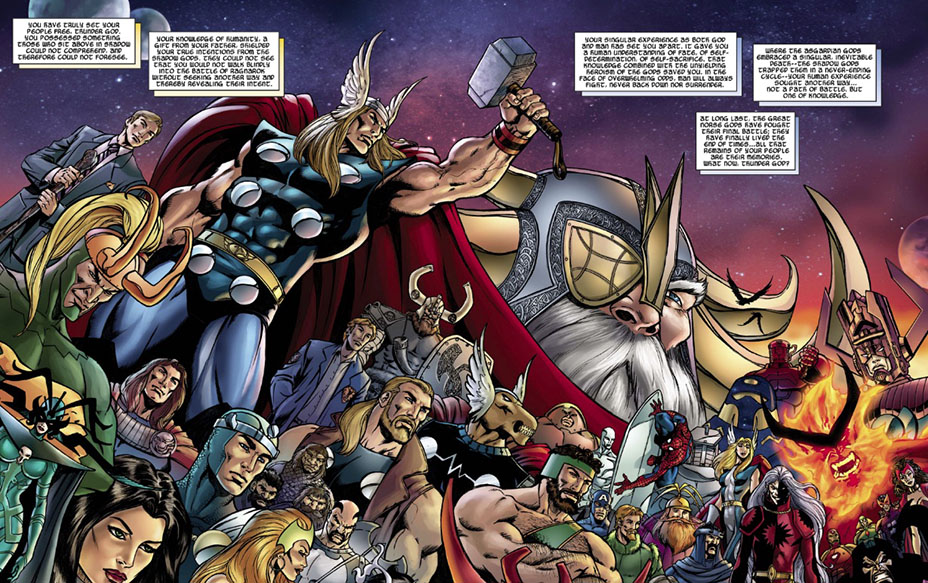 Curiously enough, part of the later revival of the Thor comic property does make it into Thor: Ragnarok — the idea that Asgard will, in future, exist on Earth. (In the film the Agardians are traveling on a ship to find a new home.) That idea is part of the hook of the comic book revival, with Asgard existing as a floating kingdom above a town in Oklahoma, with the resultant culture clash being the perfect fodder for comic book comic relief. (Hey, Taika, if you want to come back for another Thor, it’d work on the big screen, too….)

The meat of the non-Sakaar portions of Ragnarok‘s plot — that comes from the “Planet Hulk” storyline from Marvel’s Incredible Hulk comic — has its origins in Walter Simonson’s run on the monthly Thor comic in the 1980s. Hela, Surtur, Skurge and the Fenris wolf all played significant roles in Simonson’s four years as writer and artist (joined in the latter role by Sal Buscema for his final issues), with specific character beats and, on occasion, visuals lifted directly from the Simonson comics for the screen. The plot doesn’t exactly track, in part because Simonson had characters in key roles in his story who are either sidelined or missing entirely from the movie, but there’s an unmistakable Simonson-esque feel to the entire movie for those familiar with the run.

There’s another way in which Ragnarok echoes Simonson’s work on the Thor comic book, and it’s one that’s arguably more important than any plot or character similarities. When Simonson took on the series with 1983’s No. 337, it caused a stir amongst fandom for immediately redefining the idea of what a Thor comic book could be. Not only did his angular, design-focused artwork look significantly different from what readers had seen for the previous decade or more, but his first issue did the unthinkable: it took the hammer away from Thor when an alien not only managed to lift it, but gain the power of Thor for himself. Even the cover of the issue, which showed the alien smashing the logo the comic had featured since the 1960s, was unprecedented, with everything adding up to one message: All bets are off.

In its own way, Thor: Ragnarok does the same thing for the Thor movies. (It even plays with the faith the audience has in Thor’s hammer; instead of having someone else use it, Hela simply destroys it.) By treating the characters and mythology with less fear — and, in the best way, less respect — than in earlier movies, the series feels suddenly revitalized and filled with possibility in a way it hasn’t done before. It’s a rebirth as mighty as what awaits the cinematic Asgard, and one that’s arguably more impressive.