But what would a Jerry Bruckheimer production be without a ragtag group of supporting players who wear their character archetypes as badges and are often defined by their ethnic backgrounds? Say what you will about the films themselves, but Bruckheimer and Don Simpson’s productions gave audiences some of the wildest side characters of the ’80s and ’90s, including Captain Hendrix (John C. McGinley) from The Rock (1996), Pinball (Dave Chappelle) and Ramon “Sally-Can’t Dance” Martinez (Renoly Santiago) from Con Air (1997) and the entire mining crew from Armageddon (1998). A Maverick casting breakdown obtained by The Hollywood Reporter points towards the pic living up to the mighty legacy of these characters and an era of movies that’s been replaced by new rules.

Top Gun gave us characters with call signs like Goose, Viper, Jester, Cougar, Wolfman and Sundown. Not to be outdone in that department, the call signs in the new casting breakdown on the Bruckheimer-produced sequel include Phoenix, Slayer, Payback, Fanboy, Warlock, Cyclone, Viking, Coyote, Lardo, Bob and my personal favorites, Harvard and Yale. The descriptions of these characters are even better. Phoenix is described as a whip-smart and sassy Latina woman who does things her own way. It’s a bold move right off the bat, because we’ve never seen a sassy Latina or a woman who has to fight to earn the respect of male peers in film before. Viking is open to both males and females of Nordic ancestry, so expect your blue-eyed, blonde haired god or goddess in the vain of Dolph Lundgren or Brigitte Nielsen. Fanboy is open to all ethnicities and described as having an encyclopedic memory. In other words, expect Maverick to cash in on the Big Bang Theory level of nerd-dom. Lardo, who is described as an “honest, loyal, gregarious and charming” technical specialist, is definitely going to be the movie’s “big guy.” If the name “Lardo” wasn’t enough of a clue, then use of the word “gregarious” seals it. For Harvard and Yale, the production is looking for male siblings, even twins. Never underestimate the comedy potential of twins. Warlock doesn’t get a description, but he is listed as black, so it’s safe to assume his race will provide the personality.

I’m being tongue-in-cheek here with this commentary, of course, but it’s amazing how these character descriptions, for a movie coming out in 2019, reflect a much different era. This isn’t necessarily a bad thing, but it is perhaps indicative of a Hollywood studio system we’ve largely left behind, despite the fact that so many movies from that era elicit fond memories. Michael Bay and Tony Scott’s films of decades past had a sunset glow, and an explosive (literally) sense of summer blockbuster fun that relied on character actors and stereotypes played for good-humored laughs. Neither the most progressive in terms of narrative or character conception, these pics did display a kind of self-awareness and utter lack of gravitas, even in the face of tragedy, that feel refreshingly humorous in today’s context.

Kosinski is returning to the world of Top Gun in a much different pop-culture surrounding than that of 1986. Not only have our views on military service changed, but so has our awareness of people and their complexity as characters. Maverick will have to find a way to balance that, but in a way that still captures that Bruckheimer magic where characters are only as good as their nicknames. Sure, these casting breakdowns are equal parts ridiculous and dated, but they suggest too much fun to not be enthusiastic about seeing the film come together.

Top Gun: Maverick, set for a July 2019 release, may have taken decades to come to fruition, but it still promises to be the hottest movie of 1992. 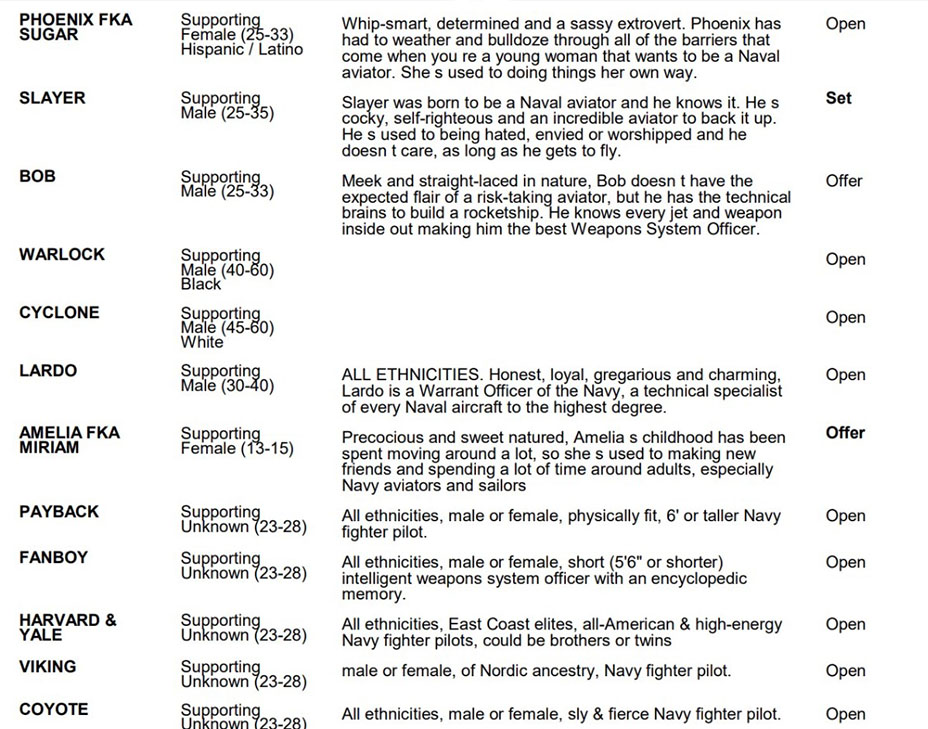