Continue to The Hollywood Reporter SKIP AD
You will be redirected back to your article in seconds
Skip to main content
June 20, 2019 7:05am

It’s been nine years since the last Toy Story movie and two dozen since the first movie debuted in 1995. Not many franchises can keep interest and also remain critically acclaimed for so long. But Pixar’s latest film is not only tracking to open to a massive $150 million stateside, it also sits at an incredible 99 percent fresh on Rotten Tomatoes as early reviews have praised the mix of heart and adventure.

As a refresher, the last movie ended with Woody (voiced by Tom Hanks), Buzz (voiced by Tim Allen) and the rest of Andy’s toys being passed on by him to Bonnie, ensuring they would stay together and be enjoyed by another child. Bonnie takes them all on vacation with her and her family, including the new toy she made herself, Forky (voiced by Tony Hale). When Forky goes missing, the gang sets out to find him, leading to the return of Bo Peep (voiced by Annie Potts) as well as the introduction of a host of new toys, not all of whom are friendly.

Disney’s marketing campaign has hit all the beats that viewers expect, but has gone light on story details as it seeks to sell audiences on the return of characters they’ve loved for over two decades.

Teaser posters (all from Legion Creative Group) simply showed Buzz and Woody alone. Forky and the pair of Bunny and Ducky also got their own posters. Another one with Bo Peep followed in January.

All the toys were assembled on the theatrical poster released in mid-March, a one-sheet that is similar in style and design to those for the previous three movies. New characters join old ones, and the carnival setting of the story is hinted at through the Ferris Wheel visible through the window behind them.

The three main characters — Woody, Bo Peep and Buzz — stand heroically on the next poster from early April.

For Imax presentations the artistic style is changed to show the toys in front of the carnival setting where the story takes place. Dolby Cinemas featured a similar look but with a slightly different arrangement of the characters. Bunny and Ducky are used on the Real 3D poster, both of them sporting 3D glasses and looking very cool and assured. Real 3D also released its own Forky poster later on.

The first teaser trailer (18.8 million views on YouTube), from last November, starts off showing all the old familiar characters spinning around gleefully before we meet Forky, who freaks out about not belonging there, causing the whole thing to fall apart. That was immediately followed by a “reaction” video featuring a stuffed bear and duck — voiced by Keegan Michael Key and Jordan Peele — sharing their favorite lines from the Toy Story franchise.

In mid-March, the first full trailer (45.5 million views on YouTube) was released, starting off by showing Woody introducing Forky to the rest of the toys, raising some questions about how exactly this universe works. (Early social media reactions to the trailer focused on the existentialism of Forky and reviews later reiterated this theme, with Slate‘s critic Dana Stevens noting “that a new character is born who brings the question of existential anxiety even more to the fore.”)

Everyone has to protect Forky because of how important he is to Bonnie. After he and Forky are separated from the others, Woody becomes entranced by the idea of staying at a carnival. Buzz and the others go to rescue the two, but there are of course complications and problems, ending with a very emotional message of being true to your purpose.

The second full trailer (16.6 million views on YouTube), released in late May, shows more of the family vacation Bonnie is taken on, during which Forky is lost. That leads Woody and Buzz to set out to find it, leading to all sorts of misadventures. A reunion with Bo Peep leads to them meeting Duke Kaboom and other toys who will help them out.

The story was discussed and details about the cast and crew shared at the 2017 iteration of Disney’s D23 fan event. The movie was also part of the 2018 CineEurope presentation from the studio.

A Super Bowl commercial showed that once again Woody is going to have to rescue Buzz. Bunny and Ducky, featured prominently in the teaser trailer, are a big part of this one as well.

Some 17 minutes of footage was shown to exhibitors and press attending CinemaCon in March, with Disney presenting the movie as yet another sure thing from the studio at the box office.

Bo Peep emerged as an important part of the campaign, exemplified by a TV spot from late April that showed what she’s capable of. Duke Caboom (voiced by Keanu Reeves) was introduced in early May via a spot that starts out as if it’s a retro toy commercial for the character’s action figure followed by a commercial that introduces Forky by showing his origin story.

Further TV commercials included nods to the series’ earlier movies before getting into the hijinks of the latest entry. Another more clearly showed some of the conflict of the story, making it clear Forky is being held hostage.

Google ran a promoted tweet at the time the second trailer was released with a link to a landing page filled with videos, search results and other information about the movie. Further promoted tweets from Disney and Pixar included short, TV-like videos.

Contestants on a recent episode of Food Network’s Best Baker In America were given the challenge to create deserts based on the Toy Story movies.

In late May, Fandango touted the movie’s status as the new record holder for the number of advance tickets sold of an animated title, outpacing Incredibles 2 on that front. That company was also given an exclusive clip showing Buzz stuck at the carnival and being taunted by Ducky and Bunny. Atom Tickets announced the movie held a similar title on its ticket-buying platform.

Early June saw the release of a lyric video for “The Ballad of the Lonesome Cowboy” from the movie’s soundtrack. Shortly after that Hanks and Allen appeared together in a featurette talking about their long-lasting collaboration. The two made similar comments when they appeared along with the rest of the cast at the movie’s red carpet premiere the week before release.

? Alaska Airlines, which outfitted one of its jets with movie branding that included a picture of Forky on the inside of the winglet for passengers inside the plane to see.

? Almond Breeze, which offered a $12 ticket to see the movie with the purchase of qualifying products.

? Best Western, which used characters from the movie in a campaign awarding a $20 gift card to those booking summer travel accommodations.

? Bounty, which printed Buzz and other characters onto its paper towels, which were then sold in movie-branded packaging.

? Chrysler, which produced a spot featuring movie characters to sell its Pacifica and Pacifica Hybrid.

? Clorox, which ran a sweepstakes awarding the winner a family vacation to one of four cities around the country.

? Danimals, which put co-branded packaging on shelves and promoted the partnership with a commercial showing how the drinkable yogurt is perfect for family vacations.

? JoAnn, which promoted the availability of a variety of movie products in stores and online, all of which are perfect for channeling kids’ creativity.

? JuicyJuice, which gave people the chance to enter to win prizes when they entered codes online from specially marked packages of juice.

? Kellogg’s, which released a line of movie-themed cereals. While the products appeared to be widely available, specially marked boxes exclusive to Walmart included collectible decals, a promotion that was the subject of a TV commercial.

? McDonald’s, which not only put movie toys in its Happy Meal boxes but offered a sweepstakes giving winners a family vacation to Walt Disney World.

? Babble, which also offered a family vacation via sweepstakes and ran a series of commercials showing its movie-branded packaging.

? National CineMedia, which introduced movie content to its Shuffle mobile trivia game, adding questions about this and other Pixar films and characters for fans to test their knowledge with.

Dolby Cinemas and AMC Theaters hosted a sneak preview for members of its See It First program days before it hit theaters for the general public.

The Los Angeles premiere included appearances by most all of the main cast, who posed alongside their characters. Prior to that they attended a “Best Friends Day” event at Walt Disney World’s Toy Story Land. 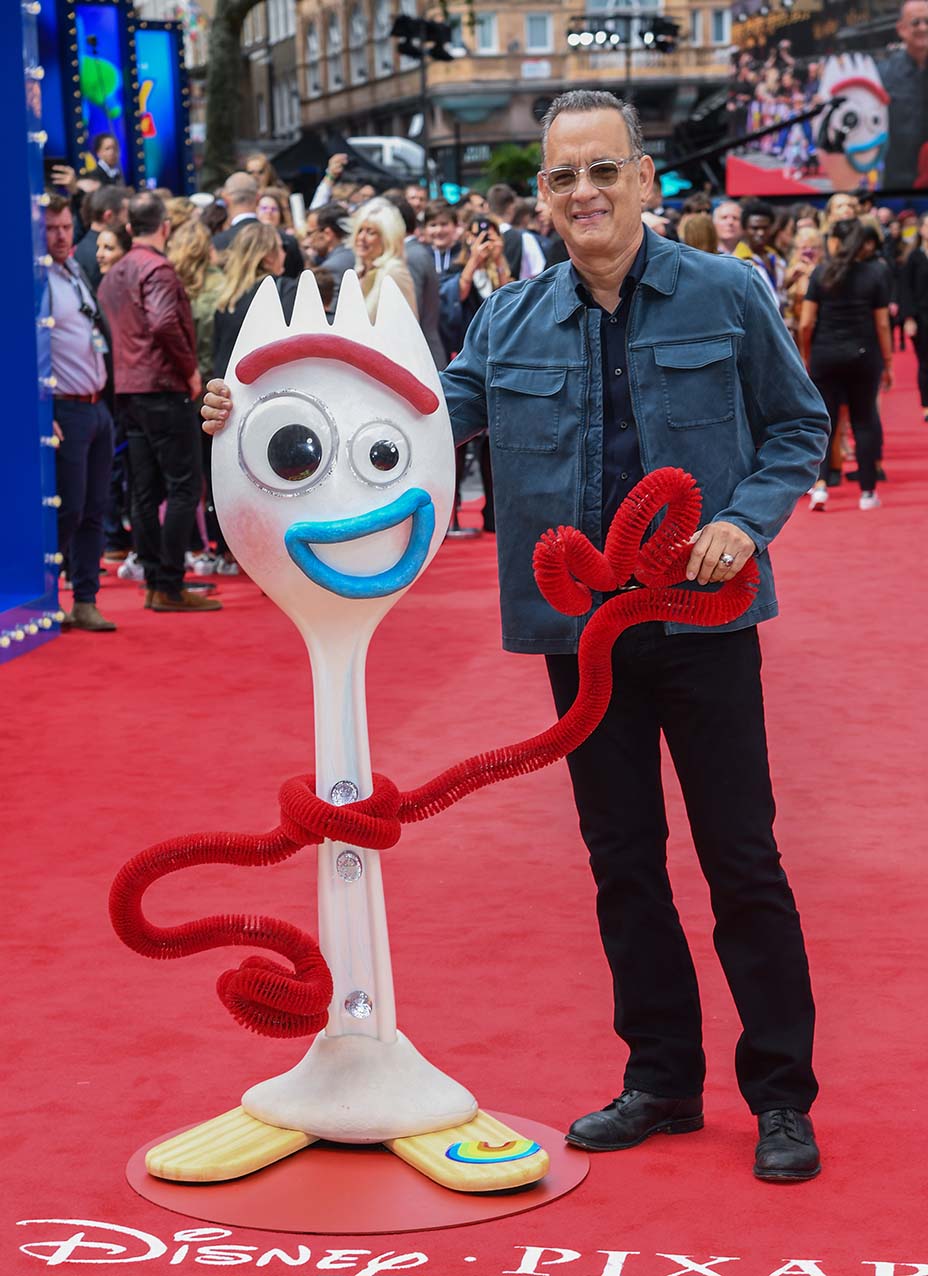 When the third movie was released in 2010, many reviewers felt it was the perfect conclusion for the series as it brought Andy’s time with the toys to an emotional close. So bringing that back and selling the movie as somehow essential or relevant was the primary challenge faced by Disney’s marketing team.

Instead of worrying too much about that, though, some of the focus has been on making Forky into a star. On that level it’s succeeded. While early reviews have pondered what the story has to say about the meaning of existence in addition to being a harrowing adventure, the marketing has been almost solely about reconnecting with old friends and seeing where they are now, including how they react to the introduction of Forky to their ranks.

That approach seems to have worked, as evidenced by the tracking estimates and sky-high Rotten Tomatoes score. It means that once more this year we’re likely to have a weekend dominated by Disney.