As the creative force behind the eponymous NBC Carmichael Show, Jerrod Carmichael is used to seeing his name directly associated with his work. But for Transformers: The Last Knight he wanted to try something different.

“In the original script the character was named Jerrod,” Carmichael tells Heat Vision with a laugh. “I was like, ‘Can you change it?’ I play Jerrod in too much stuff already.”

When he signed on to the fifth installment in Michael Bay’s expansive romp across the globe with anthropomorphic robots, the choice seemed a little out-of-place for the stand-up-turned-sitcom star, known for offering pointed, comedic takes on the country’s most controversial issues and figures — Trump, Cosby, the N-word.

“They changed my name to Jimmy,” he says. “And the next thing you know, I was in 118-degree heat in a junk yard in Arizona.”

The latest addition of the Paramount franchise (out now) will see the return of Mark Wahlberg as inventor Cade Yeager, who teams up with Bumblebee and an mysterious Englishman, played by a blazer-clad Anthony Hopkins, to uncover the Transformers cosmic obsession with Earth. Carmichael plays the aforementioned Jimmy, the comedic relief that unwittingly gets taken along for the ride.

Carmichael spoke to Heat Vision about how the franchise film was, as he describes it, “the single biggest learning experience I have had in my career.” He also explains why it will be his last — and why Bay asked him to change a joke.

But it was nice because sometimes you feel so sterile in these sound stages, just standing around and holding green tea. We were sweating and running and it felt like a real experience. And Michael Bay is such a hands-on director — he’s sprinkling dirt on people’s faces and handling the smoke machine and the camera and the lights.

How was it working on a Michael Bay set?

It may have been the single biggest learning experience I have had in my career. A reason I wanted to do the film was to see what a production of that size was like and to see how comedy can translate internationally. You can say a quippy thing or something sarcastic but does that translate to China? Does it play well in India?  It’s a skill.

On the first day, I said something that I thought was really funny and I even got the crew laughing but then Michael was like, “If you’re in China, what is that joke?” And I was like, “Oh, you’re right. That joke doesn’t work in China.” So you learn to adjust. You have to think about comedy in a new way and that was a real challenge and I learned so much that hopefully I can apply it to my own work in some type of meaningful way.

That’s interesting that everyone on set is hyper-aware of how the movie will play internationally.

And no one more so than Michael. It was fun being around him because you learn to be unapologetic and to be specific and to consider your audience. And my photography has increased by 1000 percent. You watch Mike on the ground holding the camera and I think, “I gotta do that.” I need to get Instagram to show off my new photography.

Were you a big Transformers fan?

I wasn’t a big Transformers guy growing up. Leaning to my sensibilities, every morning I would go to my grandma’s house and watch Garfield and Friends and Transformers came on afterward, so I would watch it as a follow-up to Garfield.

You really identified with a cat that just wanted some goddamn lasagna.

Yeah. Cause don’t we all?

'Transformers 6' Will Be a Lower-Cost 'Bumblebee' Spinoff

So would you do a live-action Garfield movie, if they made another one?

You know, I think I am done with franchises that are already off the ground. Transformers was a fun exception but, mark my words, this is my first and my last.

Was there anything that you weren’t expecting about blockbuster filmmaking?

Running was a surprise. It was a great deal of running — and I mean long-distance running. Because there are helicopters capturing [the scene]. We are outside of Stonehenge and Mike’s on a bullhorn like “I need you run from over here to over there.” And that’s just take one so he goes “Okay, do it again!” It’s truthfully the most I ever worked out before in my life.

What I love about the Transformers franchise is that it pulls these prestige actors like Frances McDormand, Stanley Tucci and, now, Anthony Hopkins. From an actor’s perspective, why do you think that is?

It’s also a very fun thing to do. It’s a fun set to be on. C-Hop had a lot of fun. I’m trying to get that to catch on, for Anthony Hopkins.

How’d he respond to it?

Anthony is really chill. So I was just like “Ay yo, C-Hop.” and Anthony was like “Yo.” But in a British accent. 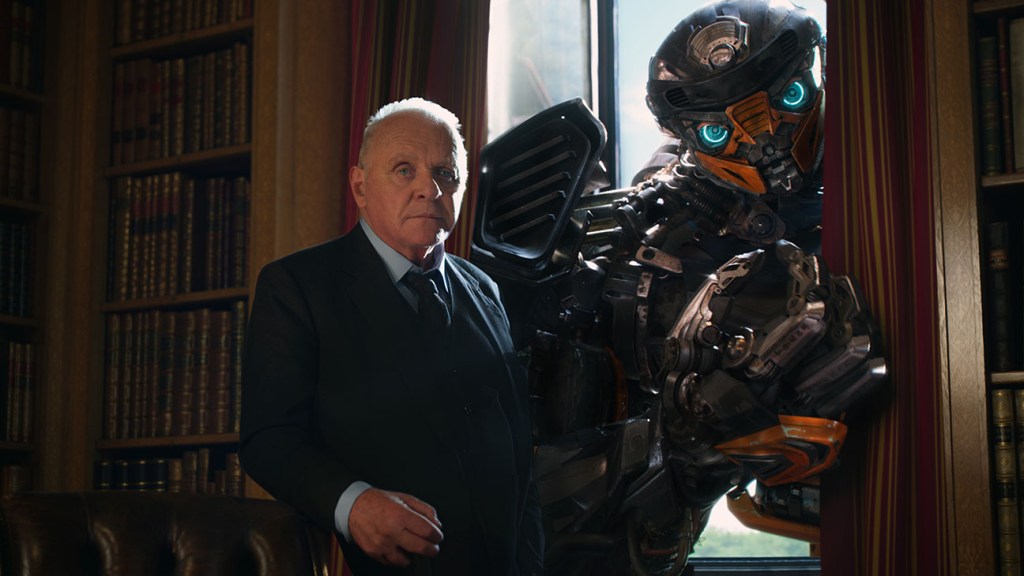 Has seeing Michael Bay at work inspired you to try filmmaking yourself?

Filmmaking is unique in that you craft everything around it — the lighting, the dialogue, the scenery, the perspective — and I’m infatuated with that now and it’s where a lot of my attention has been as of late. I think that now more than ever you have to be cautious of doing something because you can versus doing something because you can contribute to it. I am still figuring out exactly how I can contribute, as a director. But I want to make sure that in doing it it’s not just because I could, because that is not a good enough reason. You owe audiences more than that.

Big tentpole filmmaking has been more or less called the death of cinema. As a person who has interesting insight on the overall state of things, I am wondering what you think about this line of thought.

I think that art and commerce can co-exist. I think the greatest example of that is The Dark Knight. Christopher Nolan made a huge movie that had amazing acting, was aesthetically pleasing and I think you can make that, it just requires more energy and time. You can make great large films. But when things rely on testing and test audiences and you don’t have a director with a specific vision, you get these generic, cookie cutter things. And that is the death of cinema, no matter what your budget is.

A Conversation With Friends Norman Lear and Jerrod Carmichael on Race, Guns and Even Bill Cosby

Jerrod Carmichael: Why I Wanted to Say the N-Word on Broadcast TV (Guest Column)