Aquaman is Warner Bros.’ highest-grossing DC film to date, a level of success that few saw coming. James Wan’s movie crossed the $1.12 billion mark over the weekend, so it is unsurprising that Warner Bros. would want to ride that wave as long as possible, but few expected a follow-up to come in the form of a spin-off, let alone one in the horror genre.

On Friday, Heat Vision broke the news that Warner Bros. has hired screenwriters Noah Gardner and Aidan Fitzgerald to pen The Trench, a film based on those menacing, sharp-toothed sea-creatures that Aquaman and Mera fought on their way down the center of the earth. The creatures are relatively new additions to the DC mythos, having first debuted in 2011’s Aquaman No. 1 by Geoff Johns and Ivan Reis, but they certainly made their impact in Aquaman in a sequence that, if not the high point of the film, certainly took the collective breath away from theater audiences at showing after showing. In the tradition of undersea creature features like Leviathan (1989) and DeepStar Six (1989), The Trench could bring renewed interest to a still largely unexplored horror subgenre, as well as pave the way for the DC film universe to take a broader approach. Aquaman, as a concept, a comic, and a movie, is bigger than superheroes, and it’s time audiences caught the hook.

Unlike Marvel Studios, Warner Bros. tends to have movie development news about films that don’t necessarily come to fruition — or at least not in the near term. With Deathstroke, Blue Beetle, Cyborg, Deadshot, and Supergirl, the studio has a long list of projects fans are hoping to see but aren’t expecting anytime soon. But The Trench feels different, namely because of Wan’s passion for the monsters and his talent for fast-thinking, audience-attuned franchise building. Wan, who turned his film The Conjuring (2013) into a $1.569 billion cinematic universe, stands to do the same with Aquaman. Wan took to Twitter over the weekend to write, “during the early stages of preproduction, I fell in love with the Trench and its designs…and secretly hoped to explore this world further/more.” He added that he was neither confirming nor denying the project, with a wink face emoji. While Wan apparently hasn’t entered discussions to return for an Aquaman sequel, The Trench feels like just the kind of project to keep the world of Atlantis on everyone’s mind while we wait for the sequel to take shape. Warners’ decision not to rush forward with an Aquaman sequel and instead let Wan focus on something else he’s passionate about is exactly what fans of the DC films have been clamoring for. 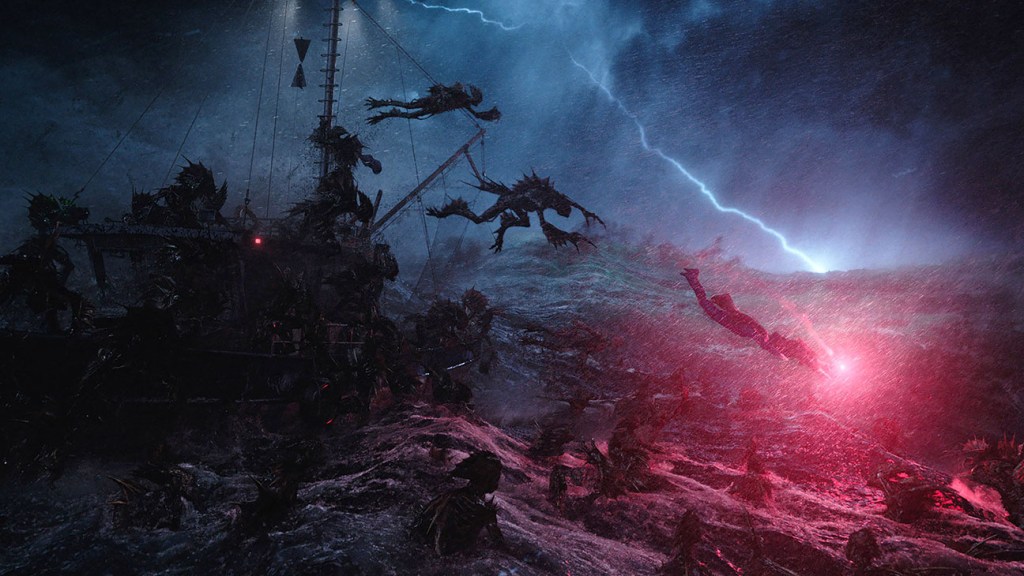 With an immediacy only legions of comic-book-movie fans can muster, many balked at the idea The Trench and questioned the purpose of such a film when so many other superheroes lie in wait. As much as we’d all love to see Henry Cavill re-don the cape in a new Superman movie, a modestly budgeted DC horror film isn’t stealing that spot. It’s expanding a universe and making good on the potential of Aquaman. The film’s marketing suggested an epic fantasy that could stand alongside the likes of Star Wars, Game of Thrones, and Lord of the Rings. That’s exactly what we got, so it stands to reason that this world of Aquaman, Atlantis, and the seas beyond would get this kind of fantasy exploration. As a concept, the Trench are certainly worthy of the attention.

As the film explains, the Trench were once Atlanteans who sunk to the deepest part of the ocean when Atlantis fell and evolved to survive. The potential for body horror alone makes that concept worth seeing on film. But if The Trench takes a page from Peter David and Esteban Maroto’s 1990 comic book historia The Altantis Chronicles, we could get a fascinating glimpse at the decline of a civilization, the creation of a culture, and a consideration of some of the oldest sea myths, all through the lens of a horror movie featuring what will presumably be a crew of humans encountering some of the most beautifully created monsters in recent memory. A horror movie set in the DC film universe is one of the best ideas Warner Bros. has delivered yet, and it doesn’t have to stop there.

There’s no reason why we must expect all of these comic-book movies to fit into a pattern of costumed heroes fighting costumed villains. Comic books themselves certainly don’t always fit into this pattern. Part of Aquaman’s success has to be attributed to the fact that it doesn’t operate strictly within superhero conventions and instead plays up the pulp fantasy and quest aspect. There’s enough backstory introduced in Aquaman that the world of Atlantis could form a cinematic universe of its own, a pocket universe within the larger DC universe. Each of the seven kingdoms could be a movie in its own right, not to mention the potential for Atlanna and Mera to receive films of their own. The comics side of things offers even more opportunities. From the tales of ancient Atlantean mage Arion (who led his own comic series in the ’80s), the love story between Princess Cora, Bazil and her crazed cousin Dardanus, to the monstrous Kordax and the curse he delivered upon the sunken Atlantis, DC Comics is overflowing with stories that would make fascinating films and further shift the DC movies away from the notion that it’s simply telling superhero stories that have to be seen in competition with the Marvel Cinematic Universe.

Of all the potential Aquaman spin-offs, The Trench certainly makes the most sense to start with. Even audiences uninterested in comic-book movies may have the incentive to show up for a horror film with cool-looking monsters. There’s also the international appeal of aquatic monsters, and while horror sometimes has difficulty crossing into international markets, The Trench seems like a property that would have global appeal and tap into a universal fear of the sea’s depths. The Conjuring universe certainly set a blueprint for what we can expect of The Trench, and with a clever up-and-coming horror director and a budget between $15 million  and $20 million, the film is almost certainly a success story and another notch on Warner Bros. aqua-belt. While Friday’s news concerning this project was certainly weird and unexpected, it shows the DCEU’s potential for evolution and to think not just in terms of heroes and villains, but of worlds populated with stories that exist across genres and appeal to a variety of audiences, from, as Pitbull so eloquently put in on the Aquaman soundtrack, ocean to ocean.

Where 'Aquaman 2' Could Go