In 1984, Marvel published “The Kid Who Collects Spider-Man,” a landmark story with a heart-wrenching twist.

It centered on a boy who dedicated his life to Spider-Man memorabilia. He had every Daily Bugle article and every photo he could find. He even had crime-scene bullets Spider-Man dodged. And then one evening he collected something even rarer: a visit from Spider-Man.

The two bonded, with Spider-Man pushing the boy on a swing made out of webbing and sharing the personal tragedy that led to his heroic path. As the night wound down, the boy asked to know Spider-Man’s real name. The hero hesitated but eventually took off his mask, revealing he was Spidey photographer Peter Parker. Peter tearfully embraced the boy before swinging off into the night.

The last panel featured a gut-punch of an ending. The boy was dying of leukemia, and a visit from Spider-Man was his final wish.

Steve Levine has been collecting Spider-Man for 50 years. Thanks to late nights on eBay and long days at comic conventions, the 62-year-old Los Angeles defense attorney has amassed what is perhaps the most unique Spider-Man collection in existence. It is easily worth seven figures thanks to pricey comics such as 1962’s Amazing Fantasy No. 15, the first appearance of Spider-Man, and rarities such as the high school yearbooks of co-creators Stan Lee and Steve Ditko. It has original art. It has impossible-to-find toys. It has it all.

The collection has defined Levine’s life. It has brought him stress, joy and everything in between. Now, he is letting go.

Starting Friday, Levine is selling his entire collection to the highest bidder, with the winner taking all. To that end, Levine has launched spider-steve-collection.com, a website cataloging 10,000 items and counting. (The website should be viewed on a desktop for the best experience.) Levine’s comics alone are estimated to be worth $1.4 million, and that doesn’t count the other items, plus the sweat equity it took to gather it all.

“You can’t duplicate my collection,” says Levine. “You could get 80 to 90 percent of it, but it would probably cost you double what I’m asking.”

He wonders if Marvel parent company Disney, or Sony, which controls Spider-Man’s film rights, might want the collection. Or perhaps a wealthy collector might step in. One thing he does know: After decades of devotion, Levine is banking on Spider-Man to swing in and be the hero he needs.

Levine has been fighting rectal cancer since Election Day 2016. Though he has beaten the odds time and time again, Levine may be nearing the final stages of his journey, and he would like to sell the collection to financially help his wife and their young daughter after he’s gone. He doesn’t want them to deal with it all.

“I never intended to sell it. I intended to keep it until my daughter made a decision on what she wanted to do with it,” says Levine, but cancer changed those plans.

For years, Levine didn’t quite know what he had.

Friend Michael Brunner recalls seeing box after box of comics and toys the first time he visited Levine’s home. (Levine now keeps the collection off-site as it awaits a buyer.)

“I couldn’t believe the breadth and depth of his collection, the high-grade stuff,” says Brunner, who spent 12-hour days on weekends helping Levine organize things for the sale and cataloging the items on spreadsheets. Photographer Erin Sullivan spent hours more photographing each of the more than 10,000 items, and a young web developer created spider-steve-collection.com as a favor to Levine.

Spider-Man fans might assume the big draw of Levine’s collection would be early Spidey comics. He has issues No. 1 to 700 of the flagship The Amazing Spider-Man series, with the first 200 graded a 9.0 or above by CGC, a service that authenticates the condition of comics.

Levine managed that feat thanks to the collective brainpower of three other Spider-Man completists, guys he used to bid against in eBay auctions until they negotiated a détente: whoever saw a desirable item first would email the others and call dibs so they would not drive the price up. Separately, the four men combed through tens of thousands of comics, page by page, to look to see if Spider-Man or his likeness showed up in a book, and combined their findings into one large document that Levine consulted for his collection. He believes he has every Spider-Man appearance in existence, at least the ones that are known.

Dan Gvozden, host of the Amazing Spider-Talk podcast who has written Spidey deep-dives for THR, has reviewed the website and believes it is the most impressive collection he has ever seen. While he has heard of other collectors attempting to gather every Spider-Man appearance, he is not aware of a collection that is so well-documented.

“It’d be hard to find someone with a collection this comprehensive and of this quality,” says Gvozden.

If you talk to Levine long enough, soon you realize it’s not necessarily the comics he treasures the most. Anyone with money can buy comics, he notes. It’s the weird stuff that he covets, like a collection of  1990s-era Fruit Roll-Ups boxes that he’s only seen go up for auction once or twice and finally snagged. There’s still one, featuring the villain the Rhino, that he doesn’t own, and it eats him up inside because he’s seen an advertisement for it and knows it exists. (“I’d pay $10,000 for it, because in 35 years I’ve never seen it [at auction],” says Levine.)

These are his holy grails.

Among the other rarities: storyboards for James Cameron’s aborted Spider-Man movie; a never-sold, Spider-Man themed Camel Cigarette pack; and a letter Ditko wrote a fan in which the notoriously grumpy artist tells the recipient what he really thinks. 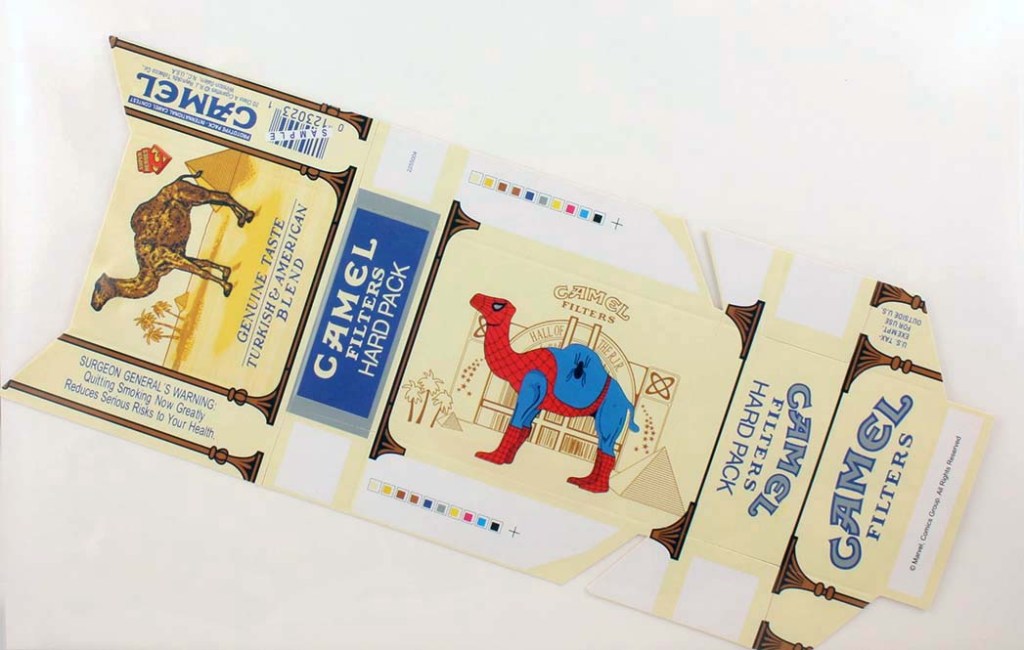 Just like Peter Parker, Levine grew up in Queens. He bought his first Spider-Man comic in 1969 and was hooked. Levine moved to California in 1989, and as his career as an attorney (and his bank account) bloomed, so too did his collection. He doesn’t know how much cash he’s spent on it, but estimates it to be in the low six figures.

As a lawyer, Levine went on to represent stars such as David Cassidy and Paris Hilton, though he did not specialize in celebrity cases. All the while, he spent nights cruising eBay. He even wound up as an extra on 2002’s Spider-Man, during the concert scene in which the Green Goblin attacks. If you pause it just right, he’s in there, says Levine. While he filmed his scene in Downey, California, much of it was shot just blocks from where he grew up in Sunnyside, New York.

Still, Levine insists he did have a life outside of Spider-Man. He dated. He played sports. And at 50, he got married.

I’ve asked him many times how he managed to get this collection together, and he isn’t quite sure. Here’s the type of story Levine will tell you if you prod:

It’s 2002, and Levine randomly meets a man who claims to own every Marvel Comic. It’s his inheritance from a convenience store his parents ran in the 1960s (they kept extras of every issue, the man says). Levine’s pulse rises. His Spidey sense is tingling. Could this be the jackpot, the chance to see comics he’s only dreamed of?

Levine tells the man his collection could be valuable, and he’d like to help him determine its worth. Levine puts the man’s phone number on a slip of paper in his pocket and goes on with his day, a spring in his step.

That night, he’s on a dinner date. At the end of the meal, Levine empties receipts and other junk from his pockets for the busboy to take away. But hours later, he’s hit with a jolt: The man’s phone number was among the flotsam.

It’s 2 a.m. and he’s back at the restaurant, begging to look through their trash. They think he’s nuts, but OK. He cuts himself sifting through sharp fish bones — all to no avail.

For the next week, he tries another tactic. The man had an 818 number. His first name was Colin, and his surname was of Chinese origin, but Levine can’t recall it. He pulls out the Los Angeles phone book and proceeds to call any Colin with a Chinese surname he can find. After days of cold calls, he reaches right the man.

Colin tells him he’d accidentally misled Levine. Colin’s collection was from the 1970s, and was mostly focused on Howard the Duck. No Spidey.

I laugh when Levine finishes the story. He had driven himself crazy, wasted countless hours, and bothered a lot of people — all for no reason. That’s what his Spider-Man obsession led to.

But no, that’s not the point of the story, I learn.

“The point is, I didn’t wonder my whole life. ‘Did I let the big fish get away?'” says Levine. 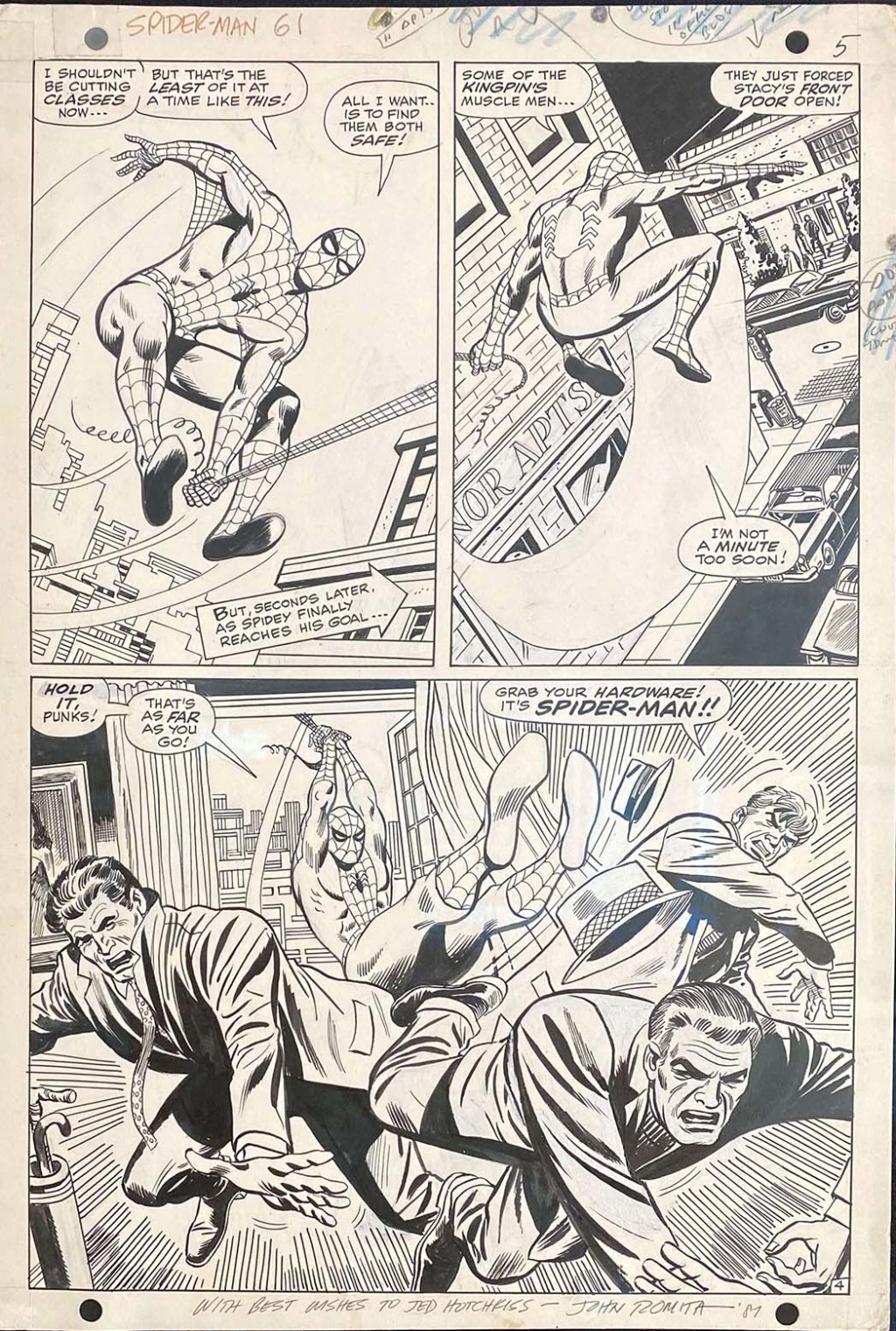 Levine has become religious since getting his cancer diagnosis. He and his daughter walk to Temple often to visit with the rabbis, and he’s been exploring what Judaism has to say about the afterlife.

“I wouldn’t have appreciated life as much as I do now. Every day has meaning. So for people who say cancer is all bad, they are wrong,” says Levine. “It forces you to really take a hard look at what’s important.”

He sees the website and his collection as part of his legacy. It’s a place his daughter can visit virtually to be with him, after he’s gone. It’s a place for fans to worship at the altar of Spidey, just as he has.

“I feel like this should be shared, and I don’t need to own it anymore,” says Levine.

Five decades after picking up his first comic, Levine is seeing a dream come true. He has been immortalized, shooting the breeze with Spider-Man and his creators thanks to a comic he wrote and stars in that tells of a poker game with the Mount Rushmore of Spider-Man creators: Stan Lee and Steve Ditko, plus artist John Romita, who took over after Ditko departed Amazing Spider-Man.

There’s Spider-Man and Peter Parker. There’s Daredevil and Doctor Doom. And there’s Levine, putting up prized items from his collection as ante.

You see, after 50 years, Levine is ready to say goodbye to it all. 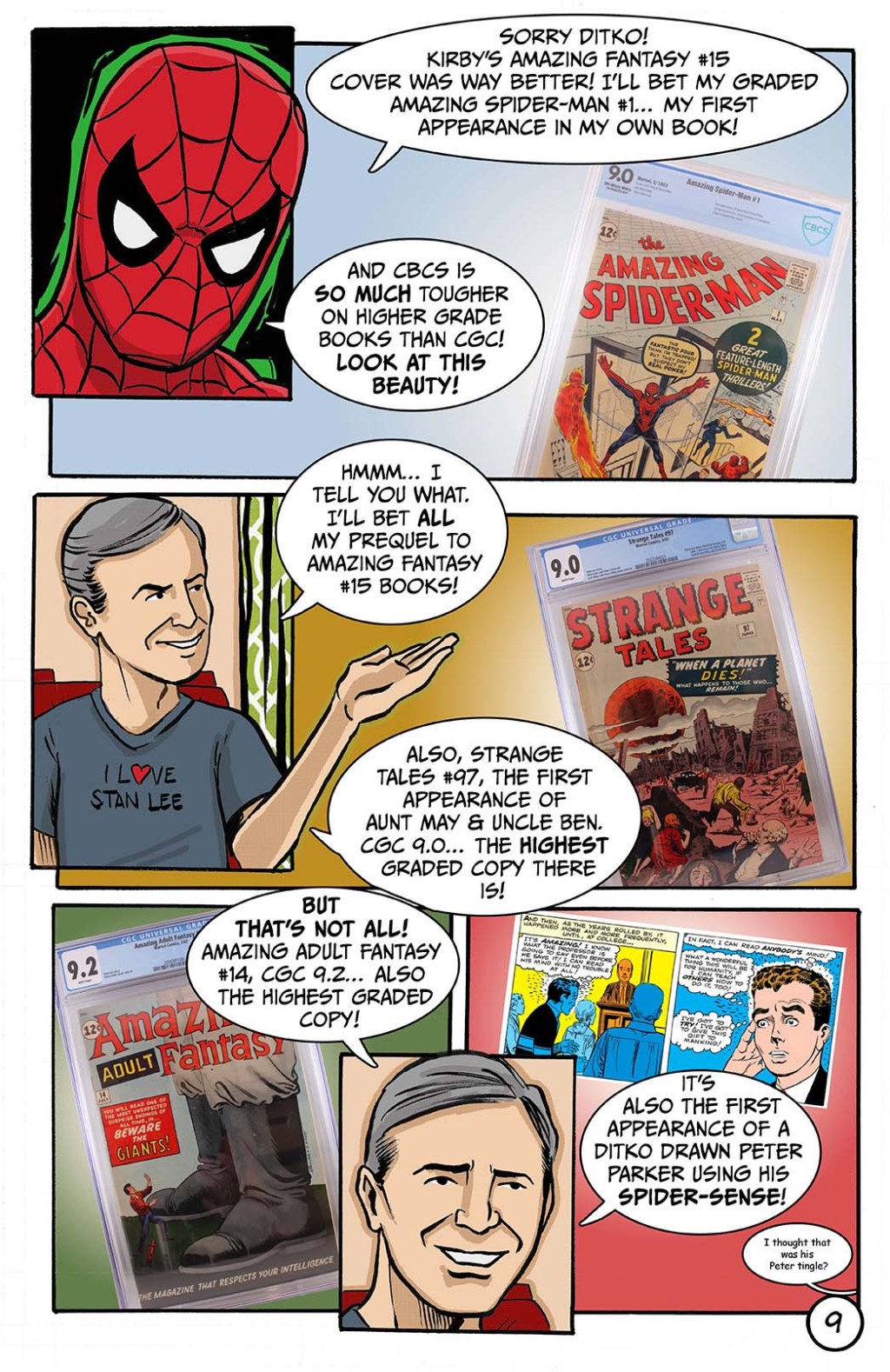 Explore the Spider-Steve Collection (and learn how to bid) here.