Filmmaker Leigh Whannell has been at the heart of box-office successes since writing and starring in 2004’s Saw. But the writer-director behind the new Blumhouse film Upgrade admits he still can’t get used to the strangeness of box-office tracking, which studios use to forecast the success (or failure) of films’ opening weekends.

“No matter how many times I experience it, I can never get used to the idea of studio executives and producers and agents telling how your movie is going to do before it comes out,” he tells The Hollywood Reporter.

The filmmaker certainly knows about the successes that can come with small budgets like Upgrade. In addition to being an architect of the Saw franchise with frequent collaborator James Wan, he has piled up big returns with the hit Insidious series, also done with Wan.

But in in the case of his latest film, Whannell hints at being somewhat deflated by the tracking numbers during a time he should have been celebrating its strong reviews (it holds an 83 percent on Rotten Tomatoes) and the work that went into crafting his stylish, high-concept action film. The tracking numbers show the low-budget film opening in the $3 million-$4 million range. (His 2015 directorial debut, Insidious: Chapter 3, opened to $22.6 million on its way to $112 million globally on a $10 million budget.)

“If you try to say, ‘Well, you know, it’s not a crystal ball, we could do something surprising.’ You know what their answer is? They say, ‘No, no. This is down to a science. We know exactly what your film is going to make,’ ” Whannell says.

Upgrade stands out as lean and mean competitor in a summer market dominated by big-budget superhero movies. It follows a tech-phobic car restorer named Grey (Logan Marshall-Green) who becomes a quadriplegic after he and his wife, Asha (Melanie Vallejo), are attacked by criminals. With the help of an advanced computer chip, STEM, Grey regains control of his limbs, and starts hunting down the men responsible for his wife’s death. The film has hints of a buddy element, in that STEM can speak to Grey as well as take control of his body — leading to fight sequences unlike anything else in theaters this year.

From a creative standpoint, Upgrade is intriguing enough to warrant a sequel, though superstition prevents Whannell from dreaming of such things before a movie comes out. But in this case, the filmmaker admits to assuming there will not be a chance for a second chapter.

“Is there going to be a sequel?’ All I’ll say is this: In light of what I’m hearing trackingwise, no. There’s not going to be a sequel,” he says. “Cinematic releases are getting into an interesting space where the only movies that make money are giant tentpole superhero movies, or low-budget horror movies like Get Out and A Quiet Place. I have a quote from a producer that I’ll leave nameless, actually saying to me, ‘Leigh, you are making an action movie for a low budget. Don’t expect it to do well.’ “

If this sounds a bit discouraging, fret not on the director’s behalf. The native Australian describes it all with a cheerful tone and plenty of laughs as well. He notes that he only gets to release a film every few years, so each one is personal.

In a conversation with Heat Vision, Whannell also speaks about some of the most challenging aspects of production and reveals that after visiting Wan on the set of Aquaman, he would consider stepping into the realm of big-budget movies if given the opportunity.

This has fight scenes that are not quite like any other movie. What were your goals with them?

The fact that it was computers fighting each other gave me the opportunity to do something a little bit different. We had the stunt coordinator training the actors in kind of a stilted, very clipped fighting style. … Then on top of that, we decided to use this camera technique where we actually locked the camera to the actor. It’s a very simple technique actually. We just strapped a phone to Logan under his clothes and the camera would kind of lock to the phone, so wherever he moved, the camera moved with him.

Betty Gabriel, who plays a detective in Upgrade, has worked in multiple Blumhouse films, but reached a new level of exposure thanks to Get Out. Had Get Out opened when you cast her?

Get Out hadn’t come out yet when we cast her. She was simply the best audition. … I was looking for someone who was a kindred spirit with Grey, Logan’s character. Kind of an analog person that still likes looking people in the eye, could still have a conversation with people without their attention span wondering, and Betty just has that. She has this old-soul presence where you feel comfortable with her. She puts you at ease instantly and that’s what I wanted with her character.

What was the toughest scene to crack as a writer?

With writing, everything is hard. Writing is just hard, top to bottom. Transforming a blank page into a page filled with words is agonizing. The toughest thing with writing was when I was cutting the film down to the budget we had. I had to do it with a death-by-1,000-cuts approach. Blumhouse told me that we had to make the film within a certain budget range, and to get it there, I had to go in with a scalpel. I didn’t want to use a machete and cut out whole sections of the movie and strip it down to nothing. So, what I did was chip away at each scene and try to reduce it down to its absolute essence.

And the toughest part of directing Upgrade?

We didn’t have a long schedule, so some of these fight scenes, they take time. A fight scene is kind of a ballet. You need rehearsal, you need to look at things, check it again. Keep going to get it perfect. The physicality of it demands that it be very mechanical instead of spontaneous. If you have two actors arguing in a kitchen, there is something very spontaneous and organic about that. You almost want to capture the raw emotion. I don’t know that I would want to do 138 takes of people arguing in a kitchen, because I want to get that raw emotion. A fight scene is the opposite. It’s a dance and you have to hit marks and you have to have a bodily perfection that cannot be achieved in a few takes. We didn’t have the schedule to accommodate that sort of approach. So, we had this weird film that was this monster hybrid between a low-budget movie and an intricate, high-budget action movie. 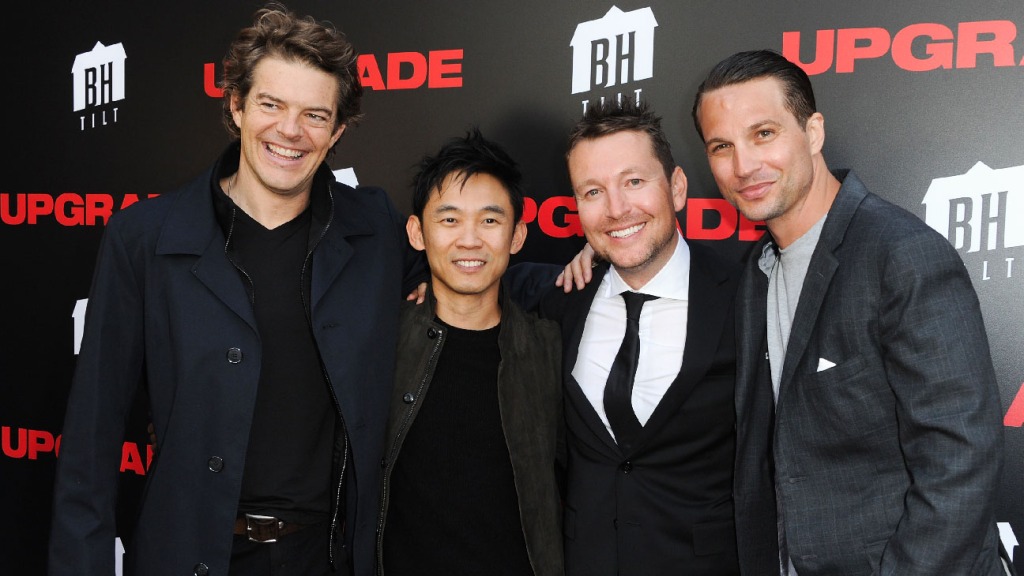 You’ve said from directing your first movie, Insidious: Chapter 3, you learned to fight for certain things on set, because you will wish you had once you get to editing. What did you fight for on this movie?

The last shot of the movie. This was happening about halfway through the shoot. … I had that quote from the movie Adaptation ringing in my ears, where Robert McKee, played by Bryan Cox in that film, says, “Listen, just get the ending right. You can have flaws, problems, everything. But if you get the last 10 minutes of the film right, you are off to the races.” … I had that quote ringing in my ears. We just couldn’t get the shot right. It was kind of a complicated shot, because there were many things that had to be done, and I wanted to do it all in one shot. At a certain point when the clock starts getting overtime, the line producer starts appearing behind you, kind of like that creature from The Ring, who just stands behind you right before you are about to die. And in my peripheral vision I can see these hovering producers. You always know they are not happy when they are standing up and they are sitting and their arms are folded. I’m seeing a lot of standing producers. I’m seeing a lot of crossed arms. And I remember the line producer said, “You can do one more. Then we have to wrap. … We are two hours over.” And sure enough, we did one more take and it didn’t go right. Everybody looked at me. … I looked up at them and there was a long pause, and I said, “I don’t know what to tell you guys. I need another one.” And the line producer said, “We can’t. We absolutely can’t.” It was one of the only times on set I kind of lost it. I wasn’t really yelling, but I said, “Listen, six months from now, you guys are going to be off working on another movie. Guess where I’ll be? In an edit room, wishing I’d gotten this fucking shot!” And so, let me stress to The Hollywood Reporter, that is quite out of character for me. Usually I’m quite mellow.

How early did you crack the ending for this movie?

I had an idea generally of where I wanted it to end. I knew the flavor of the ending I wanted, but the specifics actually came quite late. … I gave the producers all panic attacks when I told them that we needed to rejig the schedule. Thank the movie gods they did, because I feel like the ending we have is exactly what I was going for.

The only other actor I work with more than @patrickwilson73 is this guy @LWhannell. Someone has to bring some class. pic.twitter.com/n8zzu4Ylx3

You’ve visited the set of Aquaman. When you saw the resources your old friend James Wan had on that film, did it make you want to consider doing something on that scale?

Absolutely. The size and scope of it was truly astounding. I’ve been on the set of a couple of big movies before, and I remember having a really small three-line role in The Matrix: Reloaded. That was my little walk-on role in a giant movie. What James was doing with Aquaman was another level. I turned up on my first day and walked into a room and it was a soundstage the size of an aircraft hangar, and it was covered with this bluescreen, this 60-foot-tall bluescreen, and in the middle of the soundstage was this one tiny set. And I was bowled over. But then I see James, and he’s just treating it like he did back when we did Saw. He’s looking at the monitor, he’s trying to work out his shot. It kind of did open my eyes that no matter how much money you have, it still just boils down to telling a story through shots and through characters and through dialogue. I would say it actually did make me curious, if I ever got the opportunity, just to paint on that big of a canvas would be amazing. And I think the only thing that would make me not want to do it would be if there were so many chefs in the kitchen. … I do love the creative freedom of low-budget films, so that would be the thing I would miss, would be the creative freedom. But certainly, it does sound fun to say, “Hey, can we crash a helicopter tomorrow?” and the answer is, “Yeah, sure.”