[This story contains spoilers for Jordan Peele’s Us]

“What do you want?” This question, at the core of Jordan Peele’s unnerving new film Us, seems simple enough but arrives without an automatically easy answer. Peele’s film, on its face, seems more dedicated to scaring the pants off audiences than his Oscar-winning 2017 film Get Out did. Both movies have a supernatural hook — in Get Out, a friendly black man is introduced to his white girlfriend’s parents, only to realize they’re trying to use his body to house a white man’s consciousness; and in Us, a family of four is stunned to encounter their doppelgangers while on vacation. But Get Out largely ends on a conclusive enough note, having given enough backstory to the process of sending someone to “the sunken place.” Us, however, concludes full of unanswered questions and tantalizing possibilities.

Adelaide Wilson (Lupita Nyong’o) is already on edge when her family, including her charming husband (Winston Duke) and their two kids (Evan Alex and Shahadi Wright Joseph), arrives at a beach house in Santa Cruz, Calif., for a vacation weekend. But she goes into stressful overdrive when a group of exact doubles of their family come to wreak havoc, attempting to steal their lives as violently as possible. The first two acts of Us are essentially a slam-bang home-invasion thriller, as inexplicable doubles of both Adelaide’s family and their slightly snobby friends (Elisabeth Moss and Tim Heidecker) go on the attack. (From brief news footage shown late in the film, it appears that every person has a doppelganger who’s trying to take over.)

Eventually, the Wilson family returns to the Santa Cruz boardwalk, where Adelaide’s double has kidnapped her young son, Jason (Alex). It’s only once Adelaide descends literally beneath the boardwalk that the questions Peele’s story is raising come fast and furious. Adelaide takes a long escalator down, arriving at a series of endless, dimly lit hallways populated by rabbits let out of their cages and otherwise deserted rooms that appeared to house people at some point. Adelaide then encounters her double again, the latter guessing that humans had in the past solved how to copy the physical body without also copying the soul.

Before any concrete information can be revealed, Adelaide and the double fight to the death, with Peele emphasizing our heroine’s background in dance to suggest a balletically violent pas de deux. Though Adelaide is victorious, when she goes back above ground to drive her family to parts unknown, Peele reveals the final twist: the Adelaide we’ve followed throughout the film is the real doppelganger. When Adelaide (circa 1986) first encountered her doppelganger, the latter forcibly switched places. The double who Adelaide just killed is the real Adelaide after 30 years of underground confinement. Before anything else happens, though, we see that the Wilsons are driving past even more doppelgangers lining the waters, plains and more of the United States.

It’s to the credit of Us that there’s a lot more going on than just home invasions. Before we see a single image, there’s a title card describing how there are untold miles of tunnels beneath the United States that appear to have no purpose. Then, we cut to a real ad for the Hands Across America demonstration of 1986, in which millions of people held hands to help raise awareness and money to stop homelessness. Eventually, both the tunnels and that ad rear their heads, as we see the doppelgangers who have lived in those abandoned tunnels are planning to re-create the Hands Across America demonstration to show themselves to the world above. 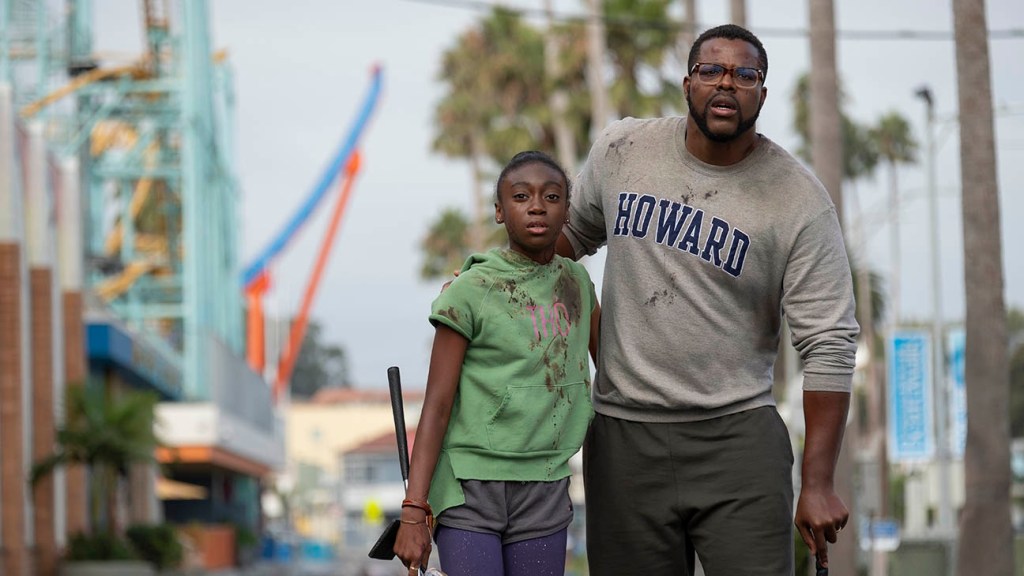 But even though Us has a lot on its mind, it doesn’t have as much interest (not that it needs to) in resolving the many questions the film leaves hanging. For one, how did all the doppelgangers get created? Even if mankind was able to create doppelgangers, how is it that every single person above ground, including babies, would match those underground? What’s the point of all the rabbits? How long do the doppelgangers intend to demonstrate for? Are we meant to think that every doppelganger has murdered their double from above ground, except for the Wilsons?

It’s not that these questions are invalid, or that they might not be resolved. Peele’s filmmaking techniques and writerly ambitions suggest that he does know the answers to these questions, even if they’re not present in the film. Peele has said he has an entire backstory for the Tethered developed. And Get Out, for instance, raised several solid questions regarding how it is that Chris (Daniel Kaluuya) could have his body used as a vessel for a blind white man. But in showing Chris a brief video detailing the broad strokes of the science, Peele was able to basically resolve those issues. You could wonder what might happen to Chris after the credits roll — would any cops wonder what happened to his girlfriend and her family, and come calling? But the basics about the premise felt clarified.

Us, on the other hand, is decidedly not. There’s always the possibility (though slim) that Peele has another twist up his sleeve — maybe this could be the first entry in a larger series. The film ends on two cliff-hangers: Jason realizing his mom was a doppelganger the whole time, and the presence of the other doppelgangers above ground. This could be Peele’s attempt at a larger universe, akin to how M. Night Shyamalan tried to stealthily introduce a superhero series into cinema before the Marvel Cinematic Universe with his 2000 film Unbreakable. (Intentionally or not, there are a few visual references in Peele’s film to Unbreakable, from a haunting period-set prologue about one of the lead characters as a youth, to constant depictions of characters through mirrors and other reflective surfaces, to even the opening title card creating a sense of unease.) Peele’s likely going to find much more box office success with Us than Shyamalan did with Unbreakable, and Nyongo’s complex and layered performance is so good that to see her delve into the character again would be a welcome return.

But either way, the open-ended finale of Us is simultaneously fascinating and frustrating to ponder in relationship to Get Out. That film famously has a pitch-black punchline, as Chris triumphs over the white family and is picked up by his buddy from the TSA, who dryly tells him, “I told you not to go up here.” But Peele’s original ending, in which Chris is found by the cops and arrested, was much darker and robbed the audience of any happy ending. There’s a similar lack of one here, and the sense that this is exactly where Peele wanted to close this specific film. Us is not quite as satisfying as Get Out, but the mere fact that it’s so creepy and so intelligent is enough to make you want more.

There Are No True Monsters in 'Us'

Why 'Us' Must Be Watched More Than Once