[This story contains spoilers for Us]

Back in 1986, Hands Across America, the zenith of the era’s entertainment activism movement, tried to form a line 6 million Americans long, stretching from New York City to Long Beach, and fell comically short of its pledge; rather than $50 million, the benefit event scrounged up only $15 million after costs, an embarrassing payout for a well-intended but astronomically complicated plan. Today, another group, the Tethered, has succeeded where Hands Across America failed, not in terms of charity but achievement; rather than combat poverty and hunger, the Tethered fought for themselves, killing scads of Americans in Santa Cruz before making a cross-country human chain to put Hands Across America to shame.

So ends Us, Jordan Peele’s follow-up to his 2017 smash Get Out, not with a bang but with mass murder and a truly menacing take on one of the great pop cultural flops of the last three decades. Unlike Get Out, a film with a clearly stated thesis succinctly argued over the course of its running time, Us is a sprawl; calling it “complicated” suggests that Get Out somehow isn’t, but the complications of Us are broader and more cryptic by far. If Get Out is about the trapdoors built into white liberal inclusion, each leading to secret storerooms for stashing racist microaggressions, then Us is about, well: Us. It’s about who we are, and what we’ve become, in 2019 America. What it’s not is easily understood. Get Out takes self-honesty to process, but Us takes at least two viewings just to “get.”

The film begins with the Wilson family — Adelaide (Lupita Nyong’o), Gabe (Winston Duke), Zora (Shahadi Wright Joseph) and Jason (Evan Alex) — taking a beach trip to Santa Cruz, where they encounter their doppelgangers: Red (also Nyong’o), Abraham (Duke), Umbrae (Joseph) and Pluto (Alex, but with Freddy Krueger makeup), who are also on a Santa Cruz beach trip, but with sinister intentions. The Wilsons fight and outrun the anti-Wilsons, discovering along the way that the immediate area, and possibly the entire country, has become a battleground between people and their bloodthirsty clones, referred to as The Tethered, the ruined product of a mad science experiment gone horribly, terribly wrong. It’s kinda like The Cabin in the Woods and The Invitation got busy and had a mutant baby with impaired speech and a problem flowchart that only leads to “carnage.” 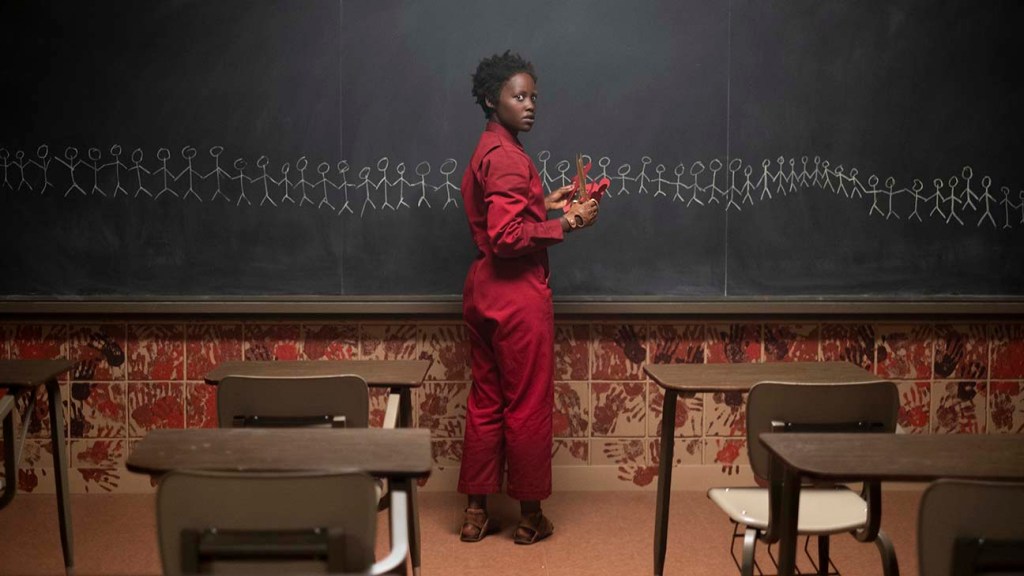 Because this is a Jordan Peele film, Us shares at its heart a similar theme to Get Out: As the white lefty characters in the latter sought to steal literal black identities for their own, so do The Tethered mean to rob their surface world doubles of the privileges they’ve been denied by a life spent living in the tunnels, service structures and subway platforms winding endlessly beneath American soil. At face value, this is a movie about people wanting for themselves what others have, and going to extreme measures to acquire it. (Whatever feature Peele makes next, bet on this motif playing a role in its narrative.) But the driving motivations of Get Out‘s villainy are selfishness and greed couched in prejudice. In Us, the motivation is much more primal: vengeance.

As Us arrives at its final set piece, a beautifully orchestrated fight between Adelaide and Red, it appears that Adelaide has met her match. And she has: Everything she can do, Red can do better, and also predict. There’s no move Adelaide takes that Red can’t sidestep or parry. But Adelaide does get the upper hand, and defeat Red, and rescue Jason, and most of all spark a flashback scene that confesses an awful truth to the viewer: Red isn’t Tethered at all. She began life on the surface. It’s Adelaide who’s the doppelganger, having swapped places with Red back in 1986, the year the film opens on (and, by no accident, the year Hands Across America stumbled across the country and wound up falling flat on its face).

The Tethered do not invade simply because they’re sick of their lot in life, mimicking the gestures of their above-ground doppelgangers without knowing what they’re doing or why; they invade because Red literally had her lot in life stolen from her, and she has spent the last 33 years preparing not rebellion, but revenge. The Tethered’s attacks on unsuspecting beachgoers has as much to do with liberation as getting even, and this macabre revelation fundamentally changes the audience’s interpretation of Us‘ events. Things that might not otherwise add up suddenly make new, sobering sense; why can Red talk when the other Tethered cannot, why are the Wilsons spared immediate execution while their friends, the Tylers (Elisabeth Moss, Tim Heidecker, Cali Sheldon and Noelle Sheldon), are butchered without hesitation, why does Adelaide intuit so easily that the doppelgangers know their thoughts?

Peele’s grand climactic twist aside, Us is a movie that demands multiple viewings; it’s a massive production, ambitious and packed well beyond the gunwales with big ideas about humanity’s sins and follies in the present day. But couched in foreknowledge of that twist, the film changes on second viewing. Trivial details no longer seem trivial. The viewer assumes Adelaide is anxious about going to the beach because she remembers what she saw in the oceanside funhouse as a child; really, she’s anxious because she knows what lies beneath it. Unlike Gabe, and Zora and Jason, Adelaide has no questions about her identity. She knows exactly who she is. And knowing who she is, and where she really comes from, terrifies her, as it should terrify Peele’s audience — and will, both in retrospect and on a second visit to the theater.

There Are No True Monsters in 'Us'