[This story contains spoilers for Jordan Peele’s Us]

Jordan Peele’s Us unwraps the terror of two Americas.

From the very first scene, Peele paints a picture of a bygone America. A Black wicker doll, a relic of entertainment from the survivors of slavery, sits on the TV stand. The films on the shelves hold segregated content like The Right Stuff, CHUD and Nightmare on Elm Street. These were films everyone bought but were only marketed to select groups and starred a monolithic depiction of the human race. Each film features a ragtag group that becomes family as they battle their way through insurmountable odds.

Through the innocent, but seeing eyes of a child, the audience experiences two commercials. The first commercial features an upbeat tune and an ambitious goal. Hands Across America, a chain of citizens from sea to shining sea, holding hands to raise awareness for poverty in America. The next commercial features fast rides, bikini bodies and classic festival food at the Santa Cruz Beach. When the TV clicks off, a reflection of an upside-down Adelaide Wilson (Lupita Nyong’o) receives these messages. She chooses to participate in the latter, but it’s the former that leaves an impression.

America has always been two nations divided by cash flow. As Adelaide walks around Santa Cruz Pier she sees a homeless man holding a sign that reads Jeremiah 11:11 — “Therefore thus saith the Lord, Behold, I will bring evil upon them, which they shall not be able to escape; and though they shall cry unto me, I will not hearken unto them.” From Jim Crow to the Civil Rights movement to Reaganomics, pop culture and political drives push and pull for progress while clinging to the traditional cultural standards.

Michael Jackson embodied this ideal in the mid-1980s. A child prodigy out of the Motown era, Jackson grew up before a nation in metamorphosis. Post-World War II, a new world power, America had an economic boom, a moral identity crisis, a financial implosion and a betrayal by its commander in chief. Through the slog, Jackson provided a welcome distraction. So much so that he reached a near god-level status and became untouchable. Adelaide chooses a Thriller shirt as her prize at the fair.

“Thriller” director John Landis has said of the music video, “In adolescence, youngsters begin to grow hair in unexpected places and parts of their anatomy swell and grow. Everyone experiences these physical transformations in their bodies and new, unfamiliar, sexual thoughts in their minds. No wonder we readily accept the concept of a literal metamorphosis.”

Mimicking the final shot of the “Thriller” video, Peele directs star Nyong’o in the final moments of the film to turn and give the same revealing smile Jackson gives the camera. The insinuation is that the nightmare isn’t over, and evil wears a kind face. 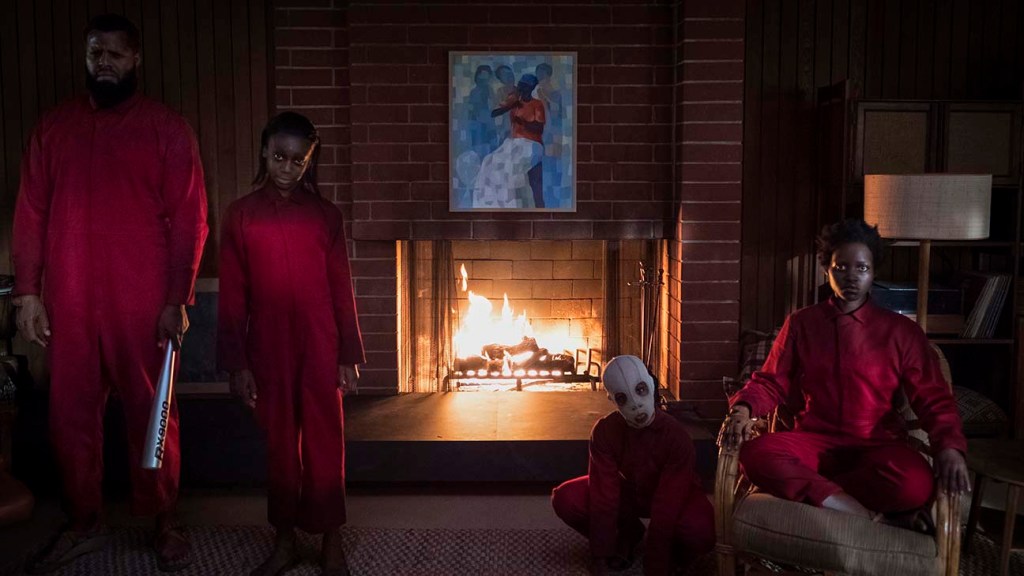 Throughout Us, Peele establishes a dual America. The Haves and the Have-Nots occupy the same space and time. They live completely separate lives, the outcomes of which are tethered to one another. When Adelaide meets her opposite, Red (also Nyong’o), they trade places. In a traditional horror, the audience is meant to be horrified by the reality of sweet Adelaide living underground, without language or intimate parental love. But Red didn’t deserve that lifestyle forced on her either. She, too, was innocent.

Just as Adelaide could see the dichotomy of her world, the friction between her parents, the dizzying distraction of the gilded fair; so too did Red see the destitution of her existence. Stumbling through the halls as mad men and women devoured live, screaming rabbits and seized in organized, standing positions, Red’s young mind yearned for more. It’s telling that Red believes she could only survive above ground if Adelaide took her place below. Red believes that only Adelaide has value. If the parents above knew she was from below, would they have allowed her into their home?

As an adult, Red only drinks water and eats fresh food. She remains hyper-aware of the life she left behind. When they meet as adults, Adelaide reenacts a portion of her torment on Red, shackling her to the coffee table as Red’s family is hunted down by Adelaide’s family. Adelaide tries to sever the tether the same way she found out she was connected. In a quick and violent exchange, Adelaide gives her supervillain origin monologue dictating how her life was a mirrored version of Reds, before pushing Red’s face into a glass tabletop. 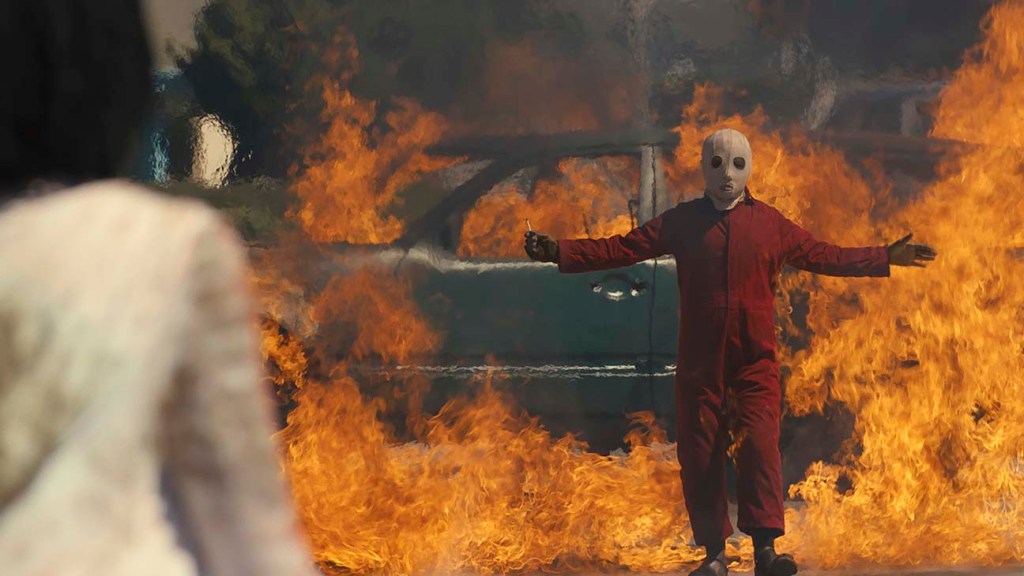 One of the most lingering questions Us leaves is, “Who is in charge?” In her familial home, Adelaide tells Red that she had to marry Abraham (Winston Duke) because Gabe (Duke) was Red’s prince. All of Adelaide’s life became a mirror image of what Red did on the surface. But, that theory doesn’t hold up. Adelaide helped construct an entire movement of the underground world to attack the surface world, without anyone on the surface changing the direction of their movements.

In the closet, Jason (Evan Alex) and Pluto (Alex) play the mirror game. Pluto snaps his finger, igniting a flame. Jason flicks the toy in his hand, mimicking the gesture. At some point in the game, Jason becomes the dominant player, guiding Pluto’s hand into the air. It’s Jason who leads Pluto to his fiery death. But Red beats Adelaide in her final battle. So it isn’t the low born or the high who have control, but perhaps the most confident and the most prepared who win out in the end. 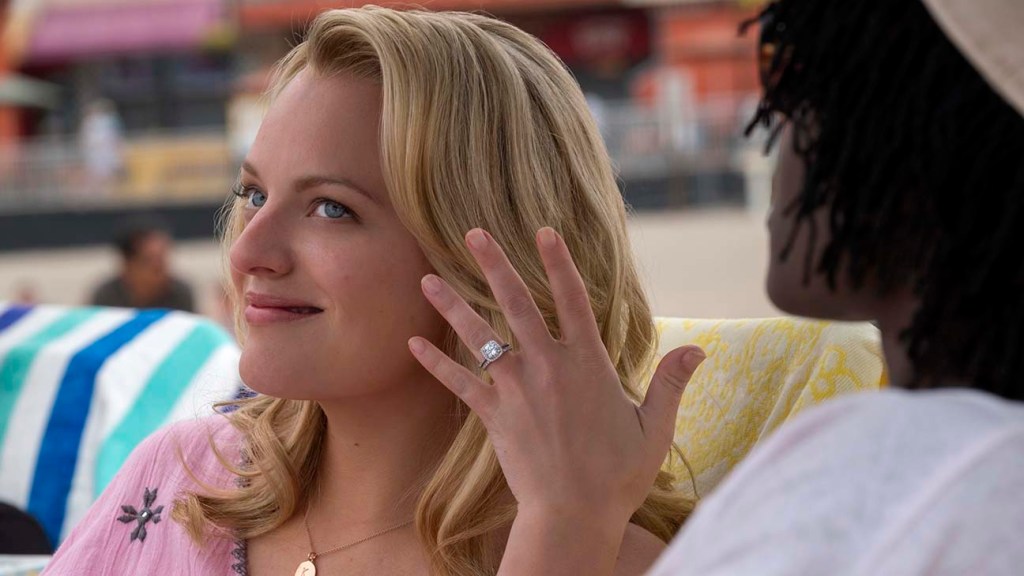 After all, each pairing shares the same fear and insecurities. Kitty (Elizabeth Moss), jealous of Red’s lasting beauty, “had a little work done.” When her other, Dahlia (Moss), sees Red, she too cuts her face with the golden shears. Since Adelaide had to cut Pluto out of her stomach when Red had a C-section, it can be assumed that Delilah is cutting her face for the second time, still unsatisfied with the face in the mirror. She loses herself in a ’50s-style glamour session, trying to find the right angle of her beauty.

Red and Adelaide share the same fears and anxieties. Red tries to save both sets of children, hers and Adelaide’s. While Umbrae (Shahadi Wright Joseph) hangs from the tree, Red reaches out her hand, the same way she reached for Adelaide in the funhouse. A gesture of comfort and curiosity, Red tried to form a connection with this daughter she never knew, but Umber just laughed maniacally until the light drained from her eyes. Red mourned Pluto as he burst into flames. When Adelaide takes Jason into the tunnels, no harm comes to him. It can be assumed that she would have tried to mother both children had she survived.

There are no monsters in Us. Peele holds a reflective mirror to American society. Pop culture shapes and defines how society looks at itself. Adelaide saw hope in Hands Across America and survival in Michael Jackson’s “Thriller”. The uniform she gave her people included a single driving glove, probably something she saw her father wear and the symbol of Jackson in the ‘80s, a workman’s jumper in bold red, the same sandals she wore as a child, perhaps the most comfortable and sturdy shoe anyone in the tunnels had encountered, and the golden scissors.

In a classroom,arguably the most segregated space in America, Red and Adelaide begin to fight for final supremacy. Two women, both survivors, both dedicated to their families, both knowing the taste of a better life and unwilling to go back to the hell they knew, begin to destroy one another. In another science-fiction horror film featuring doubles, Annihilation, a speech about the natural instinct for humans to self-destruct is given by a woman dying of cancer. Red destroyed Adelaide so that she might survive. Adelaide instructed everyone to kill the worst parts of themselves. As a nation obsessed with perfection, Gabe’s need to be better than Josh (Tim Heidecker), Kitty’s need to be forever young, it can be hard to understand which parts need cutting. Kitty wasn’t a good friend to Red. Gabe couldn’t see that his wife was hiding a horrible secret.

The good and evils of the world, the haves and the have nots, affect one another symbiotically. As long as they continue to be unable to hear or react to one another, the deception will corrupt everyone involved. Jason, who now knows his mother was born underground, will never trust his her, and Red will go down as a traitor to her family and her people. A simple coming together with her other might have spared Red and Adelaide a lifetime of torment.

'Us': Jordan Peele Has a Secret Backstory for the Tethered