What the world needs now is love — that’s the message that actor-artist Val Kilmer and pop artist Kii Arens hope to send with their latest art collaboration. Their solo works and 28-piece collab are part of their “Val-entines” exhibit, on display through Feb. 27 at the Studio City gallery and headquarters of We Are Hear, the music management company and record label founded in 2017 by award-winning producers Linda Perry and Kerry Brown.

The duo’s new pieces were feted with a grand opening party last week that drew guests including comedians Tom Green and Jeff Ross and musicians Pete Molinari and Thomas Augusto. At the soiree, Arens explained that he and Kilmer clicked instantly after meeting through a friend only a few weeks ago. (The actor had admired Arens’ eye-popping makeover of renowned Sunset Strip club The Roxy with a vibrant mural, the brainchild of Perry as a way to promote Arens’ new band, Jynx, that debuted in October.) 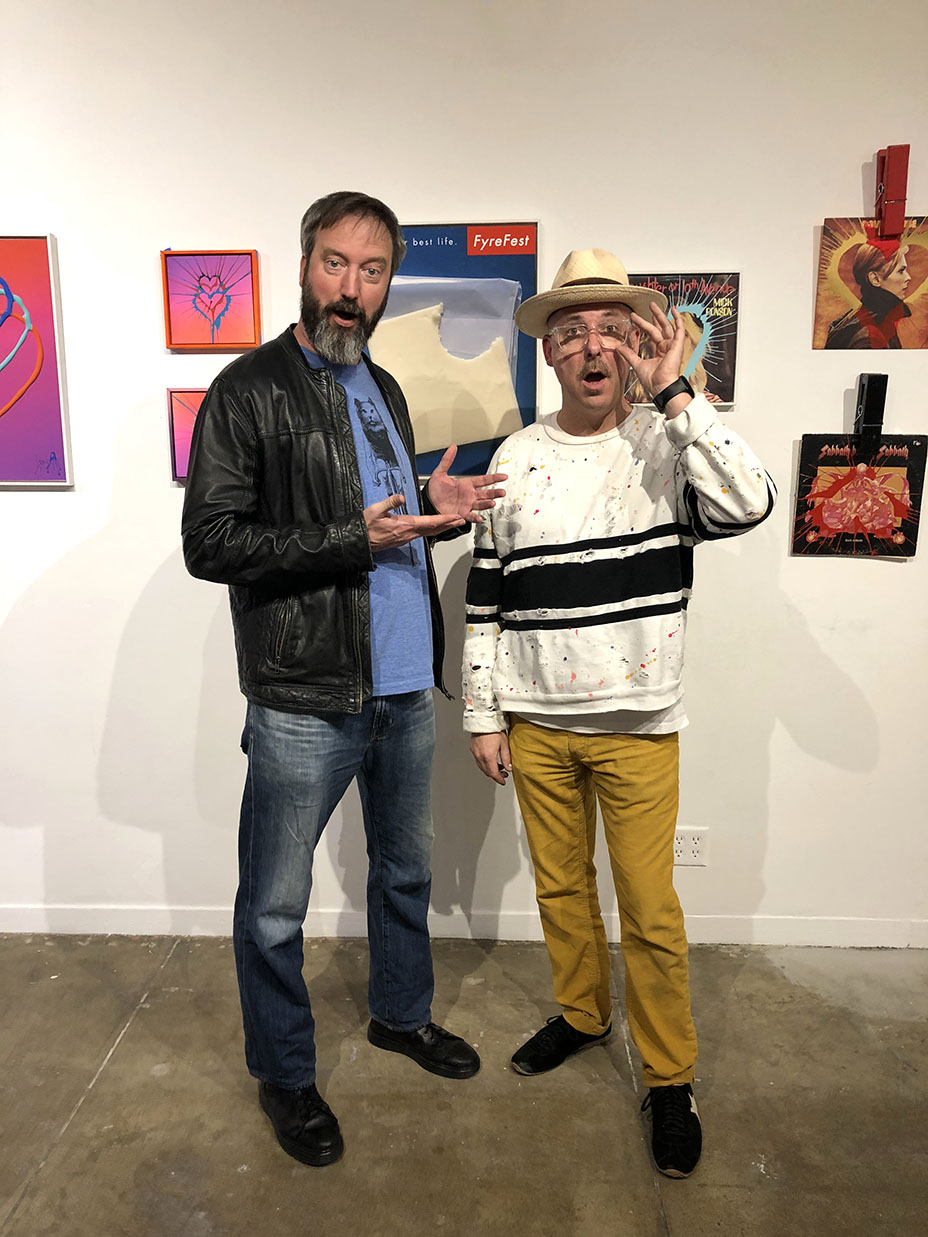 Kilmer, who has battled throat cancer for the past few years and was unable to attend the opening fete, responded by email to The Hollywood Reporter this week about his collaboration with Arens: “I’ve been a fan like everyone who sees his freewheelin’ ways and Kii suggested the collab about two days after we met,” he wrote.

The result? Arens’ painted hearts (created with a spin art machine) or the word “Love” laser-cut over Kilmer’s 12-by-12-inch paintings on steel, which feature iconic characters that the actor has portrayed in the past (including Jim Morrison, Doc Holliday from Tombstone and Iceman from Top Gun) that range from $120 to $220, while limited-edition silk-screened versions go for $80 to $125. 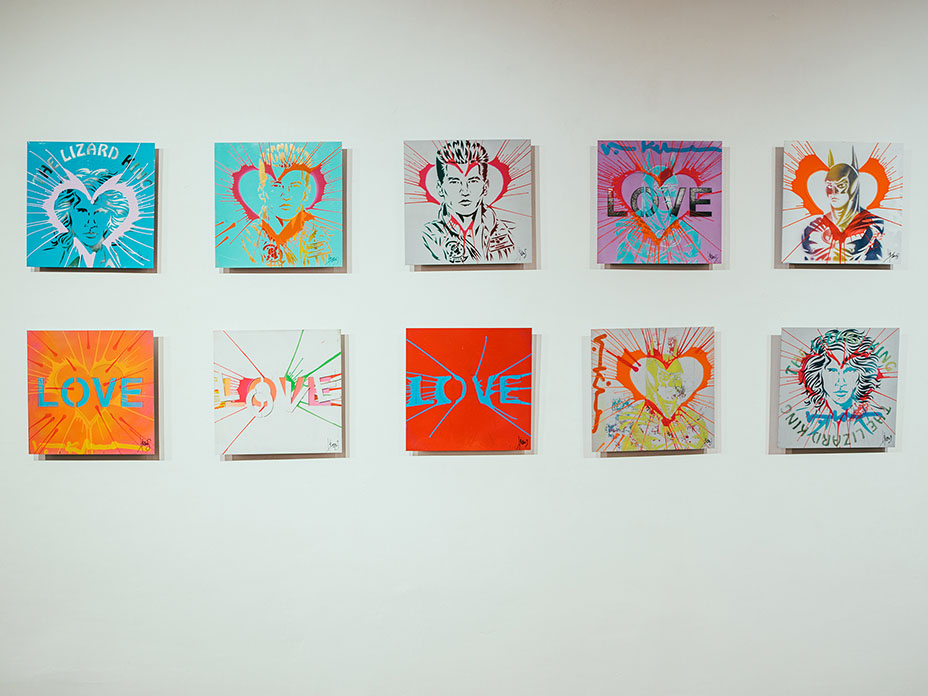 Also on display are Arens’ newest works, which include a Fyre Festival-inspired giclee print of an unwrapped cheese slice ($300), kaleidoscopic portraits of New York congresswoman Alexandria Ocasio-Cortez ($425) or card variations ($5; two for $8) and vintage ‘80s and ‘90s vinyl covers with spun-out hearts ($200 to $300).

AOC is my Valentine! (I wish!) Stop by my Pop-Up artshow today before 6 and pick up my new Alexandria Ocasio-Cortez Valentine! Open Tues-Sat 11-6 btw. You can also email info@kiiarens.com to get one! We Are Hear Gallery 12230 Ventura Blvd. @ocasio2018 #love #her

Rather than host the show at his own La-La Land Gallery, Arens opted to support the endeavors of Perry and Brown after hearing about We Are Hear. “My whole life has been based around art and music,” Arens tells THR. (On top of creating retro concert posters and album art for Radiohead, Kacey Musgraves,  Beck, Chance the Rapper, Stevie Wonder and Dolly Parton, Arens also directs music videos and is busy with his band.)

Up next for the creative duo is a mural collaboration at Kilmer’s HelMel Studio & Gallery on Melrose Avenue, which Kilmer writes “will instantly be the bookend selfie destination to the Paul Smith pink wall three miles up the road.”

In the world of film, Kilmer is reprising his role as Tom “Iceman” Kazansky in Joseph Kokinski’s Top Gun: Maverick sequel, due to release on June 26, 2020, and also starring Tom Cruise, Jennifer Connelly, Jon Hamm, Ed Harris and Miles Teller.

From what I remember about Tom “Iceman” Kazansky was that he was one of only a few United States Naval Aviators to be sent to TOPGUN. He had an extremely cocky personality and was known for his big ego, as was his R.I.O., Slider. His signature bleached hair tips are closely associated with the fact that he is “the best pilot” in the new class of TOPGUN students. Visit www.valkilmer.com for more info #topgun #topgun2 #tg2 #valkilmer #actors #movies

“It will be a great film, I promise,” the actor wrote to THR. “This time around had me laughing with Tom like a high schooler. He’s so funny. I hope he’s saved the world enough to take a decade and re-establish himself as a great comedian as he has it in him. And [producer] Jerry Bruckheimer is exactly the same as 30 years ago when I met him. So humble and attentive and focused and excited just to be on a set.”

Still in the works is Kilmer’s passion project, Mark Twain and Mary Baker Eddy, a screenplay written by Kilmer about the relationship between the literary legend and the female founder of Christian Science. “Both characters were geniuses and both have such distinct and valuable voices; I now know who I want to play Mrs. Eddy,” wrote Kilmer, who hopes to start filming next year, once the undisclosed actress accepts the role.

The film is among a handful of Kilmer’s endeavors inspired by Twain, including the one-man play, Citizen Twain, that the actor wrote, directed, acts in and has floated since 2010; Kilmer says it received standing ovations during a recent national screening tour. “Twain and Eddy are so crucial, in my opinion, to the nation and the world’s progress, that this validation of their value doesn’t have as much to do with me as it does an example of that ‘mirror up to nature’ [that] Shakespeare reminds us is the healing power in acting. Acting saves lives.”

Kilmer also created the nonprofit TwainMania Foundation intended to educate children on Twain’s legacy and to use the actor’s HelMel Studios & Gallery as space for artists of all types to work and collaborate.

My latest experiment- collaging up the abstracts. For sale soon at valkilmer.com or call (917) 406-4265 Steven Myer Helmel Gallery by appointment only, for details on private viewing.

Beyond the screen and Twain, Kilmer’s also channeling his creativity through collage art: “I’ve been doing it all my life and am currently deeply involved in an experiment about action.” The result? “Val Kilmer’s L.A. Action Scrapbook,” a book that’s part collage collection, part autobiography. A handful of pages from his books are on display through Friday, February 22 at Kimpton La Peer hotel in West Hollywood and will soon be available on Kilmer’s website as signed prints.