For a movie about an out-of-work reporter who bonds with a human-eating alien, the Venom premiere had some surprisingly endearing moments.

But it was the final moments before Hardy entered the theater that gave the star perhaps his biggest smile of the night, when he stopped to shake the paw of the event’s real hero — a hard-working security dog.

Sony is hoping that Venom, which stars Hardy as Eddie Brock/Venom, can launch a shared universe of Spider-Man-related characters. It already has Morbius with Jared Leto in the works and movies starring Black Cat and Silver Sable in development. 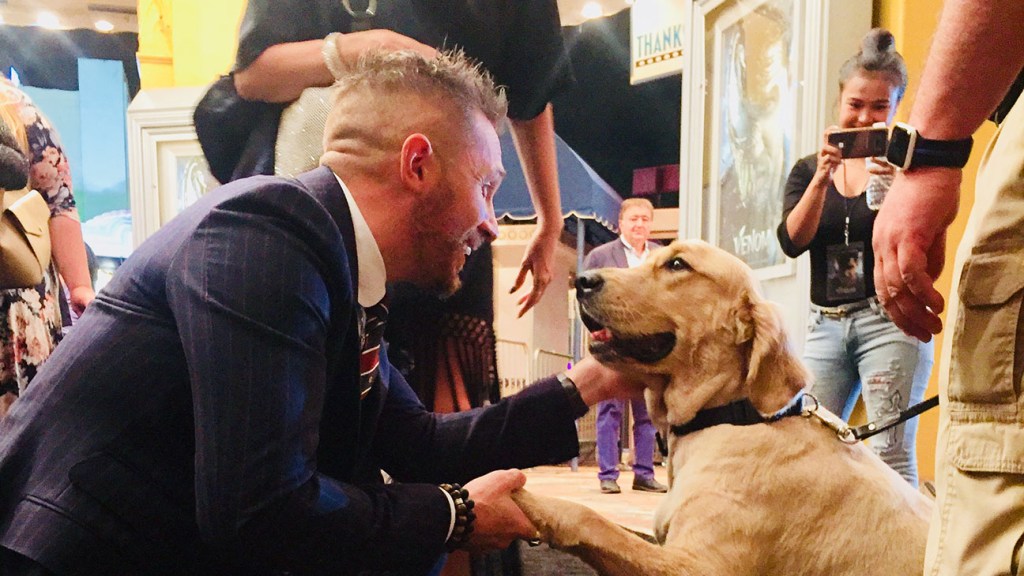 Director Ruben Fleischer will be busy on Zombieland 2, which begins shooting in January, and said he’s hopeful for a Venom sequel, too.

“I just hope we are lucky enough to make another movie,” Fleischer told The Hollywood Reporter. “If everyone wants another one, I’m sure we’d be happy to make one.”

One question on fans’ minds is if Peter Parker/Spider-Man will be able to crossover with Venom. In the comics, the two are mortal enemies, but a landmark deal between Marvel Studios and Sony sees actor Tom Holland’s Spider-Man living in the Marvel Cinematic Universe, while Hardy’s Venom lives in a separate one.

With December’s animated Spider-Man: Into the Spider-Verse, Sony is establishing that there are multiple universes out there with multiple Spider-Men (and Spider-Women), with popular comics character Miles Morales starring in that film. Is it possible that Venom could follow that thread and perhaps see him fight a Spidey who isn’t Peter Parker?

“Everything is a possibility. Everything is on the table. Venom is such a great character, it will be fun to see who he tangles with along the way,” said Fleischer.

Among the Oscar-caliber actors such as Hardy’s co-star Michelle Williams, one personality stood out at the Venom premiere: Todd McFarlane, the successful artist who co-created Venom and who is working on making his directorial debut with Spawn, starring Jamie Foxx and Jeremy Renner. When Sony film chief Tom Rothman spotted him on the black carpet, the exec asked for a photo and the two shared a warm moment.

“Venom is a complete happy accident,” McFarlane told THR of the anti-hero’s creation. He was working at Marvel in the late 1980s, a time when Spider-Man was wearing a black costume. McFarlane wanted to move over to work on Amazing Spider-Man, but insisted on returning the character to the classic red and blue look. Marvel agreed, but only if he gave the black costume to someone else. Thus, Venom was born in 1988.

“I didn’t think at that point Venom was going to go on and be that big. I was just trying to get that costume away from Peter Parker,” said McFarlane.

Reid Scott (Veep), who plays a surgeon who becomes entangled with Brock, touted the surprising comedy in the film, saying that people may not realize the comedic chops both Hardy and Williams possess. Scott’s first scene of the shoot was physically demanding and complicated. To work it out, Hardy, Fleischer, Williams and Scott locked themselves in a room.

“It took four hours and Tom was up on the dry erase board with a Sharpie doing his thing,” Scott said. “We clicked in that moment. Sometimes you have to find the chemistry while you are shooting and that’s always hard. To have that time to work on together, we instantly became friends.”

The afterparty saw guests given the chance to pose on an Eddie Brock-style motorcycle or be transformed into Venom by an old-school method (face painting) and a high-tech method (a digital image). And images of Hardy’s Venom were displayed everywhere.

Scott Haze, who plays an antagonist to Hardy’s Eddie Brock in the movie, noted that going toe-to-toe with the actor was not an intimidating experience because he is such a giving collaborator.

“I was blown away by how humble and generous and kind he was. He was one of the best actors I’ve ever worked with on every level. A  great collaborator, a visionary in his own right,” said Haze. “I had nothing bad to say about Tom.”

Check out more of THR‘s Venom interviews, below.