“The world has enough superheroes,” notes the tagline in the latest trailer for Venom, and Sony is surely hoping audiences will agree and embrace its toothy antihero come October. Venom received a warm reception at this month’s San Diego Comic-Con, leaving many fans eagerly anticipating the release of the trailer online.

There’s a lot riding on the success of Ruben Fleischer’s Venom. The first film in Sony’s planned shared universe, Venom will test audience’s reception to supporting Spider-Man characters, without the titular webslinger joining the fray. Although separate from the Marvel Cinematic Universe, Venom may have all the more chance to break out from the crowd of superhero shared universes, especially since it looks like that number of universes will grow smaller following 20th Century Fox’s decision to sell its film assets to Disney. If Venom can really manage to depart from the world-ending stakes of traditional superhero movies, and instead embrace the absurdist monster-movie aspects, then Sony may find itself with a universe unique enough to last.

Producer Avi Arad has long championed Venom, the result of which led to Sam Raimi’s reluctant inclusion of the character in Spider-Man 3 (2007). Noting the character’s appeal, Arad has claimed over the years that kids love Venom. While that may have been true in the 1990s and early 2000s, the character’s appeal, particularly the Eddie Brock iteration, has dwindled somewhat in recent years. Donny Cates and Ryan Stegman’s recent comic book relaunch has become one of Marvel’s best-selling titles and rejuvenated interest in Eddie Brock as Venom, at least among adult fans. And therein lies the interesting route Sony seems to taking with Venom. Despite Arad’s “for the kids” sales pitch, the latest trailer for the film clearly seems to be tapping its adult fanbase. After all, they’re the ones seen sporting Venom tattoos and who left the character intertwined with the metal and grunge scene of the ’90s.

This doesn’t mean that kids and teenagers won’t jump on board. Fox had a similar situation on its hands with Deadpool, and now he’s a household name. But there’s a distinctive dated feel to the look and tone of the film that feels like an intentional throwback to a simpler time of comic book movies when they weren’t the linchpin of pop culture or expected to make a billion dollars. Venom looks cool in the way that riding a motorcycle looks cool, rather than the way in which building a mechanical suit that seamlessly reacts to your every impulse, and can fly, looks cool. In other words, Venom looks pre-Iron Man cool. The pic may prove to distinguish itself from the splashy superhero movies of the MCU and mythic nature of DC’s shared universe by presenting itself as a working-class monster movie given credibility by an A-list cast.

Eddie Brock (Tom Hardy), a journalist who questions the things the government shies away from, is led to investigate the Life Foundation, run by Carlton Drake (Riz Ahmed), who has acquired an alien symbiote. Brock seems to be a truther, which is a far cry from his comic book counterpart, who is disgraced and fired from journalism after he writes an exposé revealing the identity of serial killer Sin-Eater without suitable evidence, an identity that turns out to be false once Spider-Man catches the real culprit. In the comics, Brock was always a bit tough to swallow as an actual journalist. A brawny Olympic level athlete with a mullet and affinity for sleeveless shirts, his original appearance is comically extreme despite the talented artists who depicted him. Hardy’s depiction of Brock is strikingly different. The actor sheds his leading-man persona and embraces the tics and bedeviled paranoia befitting a journalist rooted in conspiracy theories and infected with an alien parasite. With Brock, Hardy is tapping into his abilities as a character actor, seemingly creating an individual who is just as interesting to watch as his alien-enhanced alter ego.

The big question on fans’ minds with Venom is whether the character can work without the Spider-Man angle. Peter Parker has always been central to Venom’s origins, and all of Venom’s early appearances focused on him getting revenge on Spider-Man — to the point of tedium. It wasn’t until his first solo miniseries in 1993, Venom: Lethal Protector from Venom creator David Michelinie and artists Mark Bagley, Ron Lim and Sam DeLarosa, that the character really started developing on his own and became a protector of the innocents in San Francisco. It’s Lethal Protector that the film is said to draw the most inspiration from, and the trailer gives us several images and lines that are almost exact beats from the comics, accounting for a tone that may take some viewers by surprise. 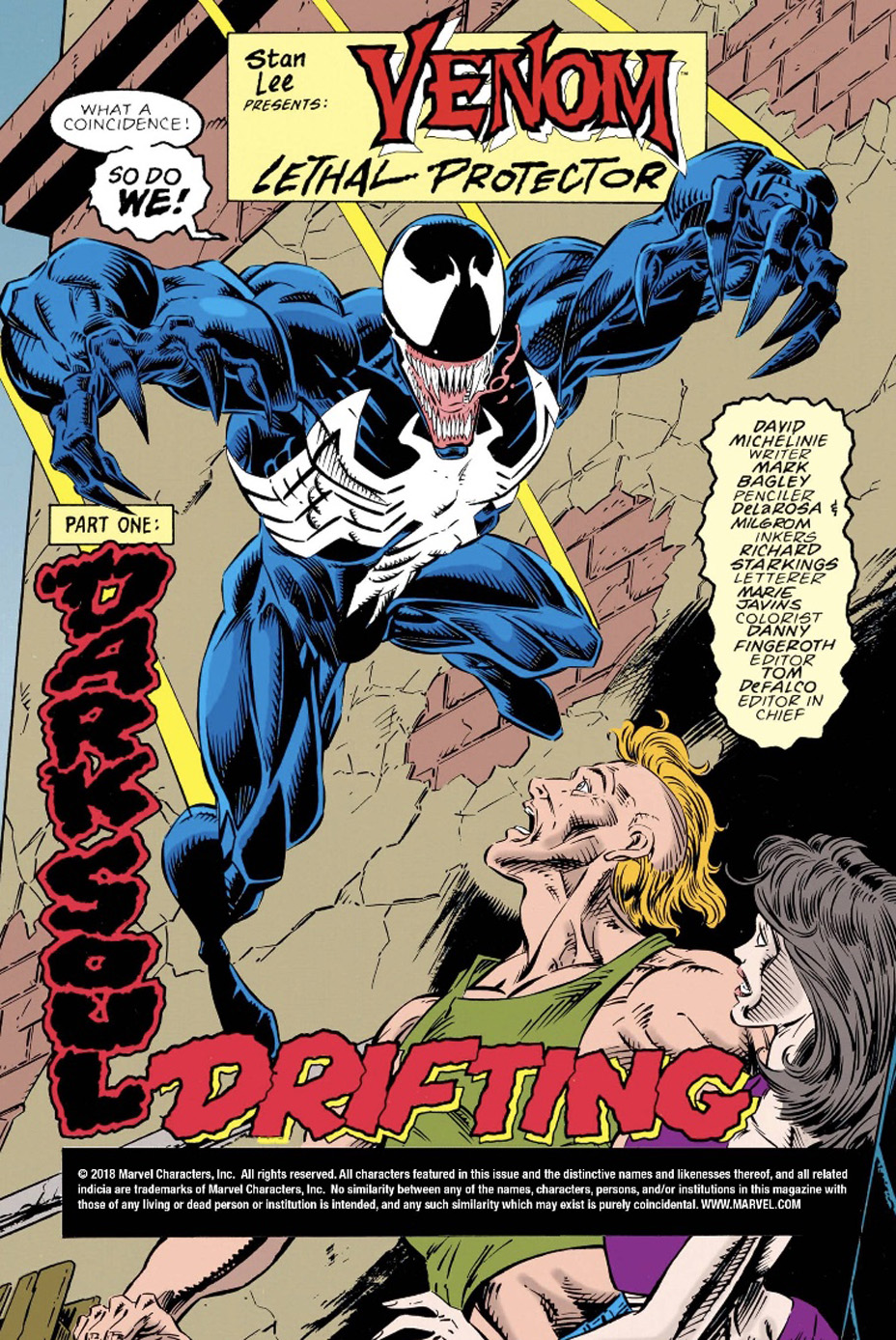 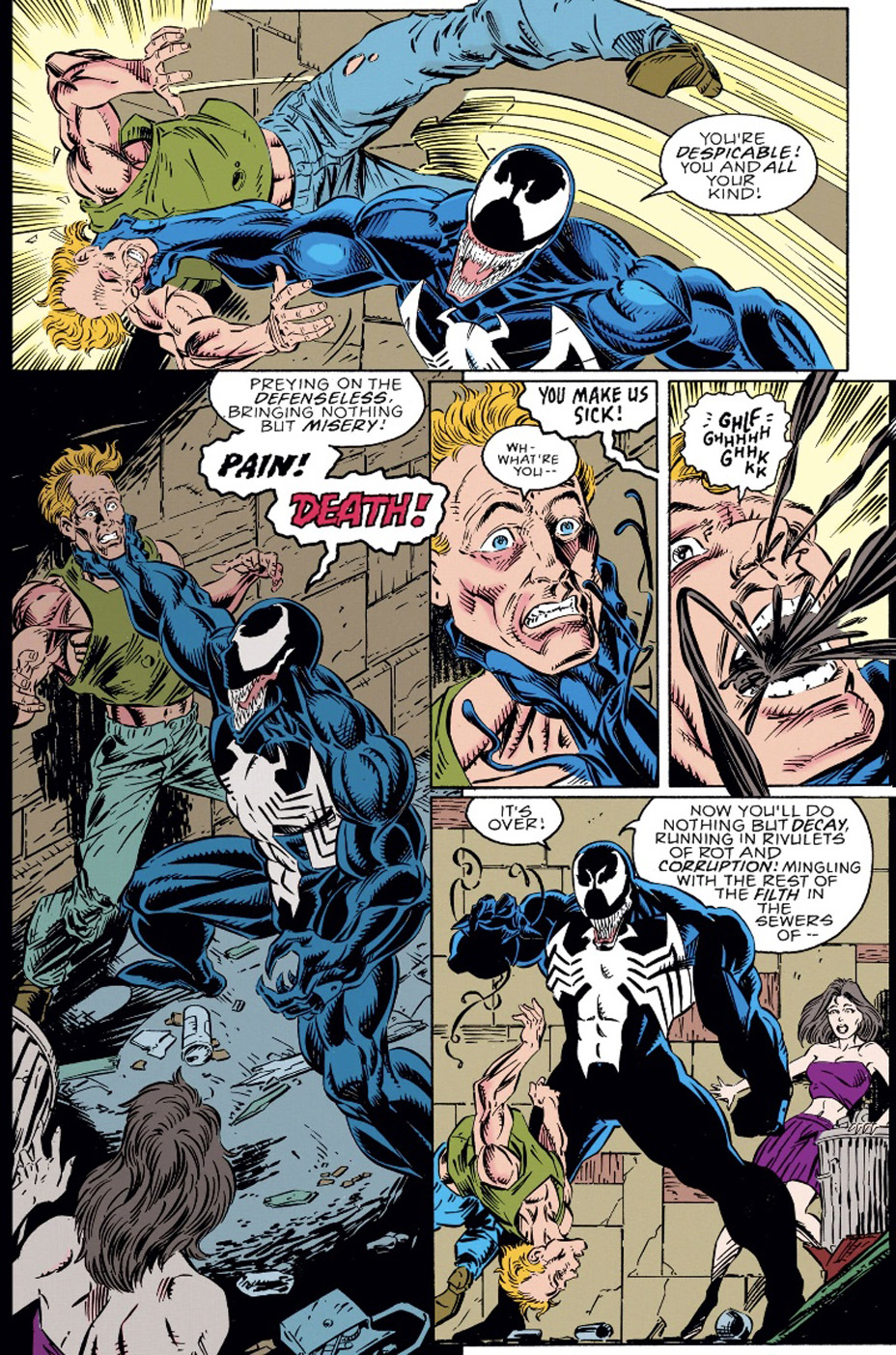 While Venom has proven to be a formidable threat many times over, there is a silliness to the character that too often gets forgotten. Brock’s frequent conversations and arguments with the symbiote, his references to himself as “we,” his penchant for eating brains and organs and his delivery of quips that would make Spider-Man groan have been black-comedy gold over the years, or at the very least amusing oddities. Fleischer, who proved his horror-comedy chops with Zombieland (2009), seems to understand that aspect of the character, which may ultimately leave the pic closer to a cross between An American Werewolf in London (1981) and Blade (1998) than to any more recent comic book adaptations. 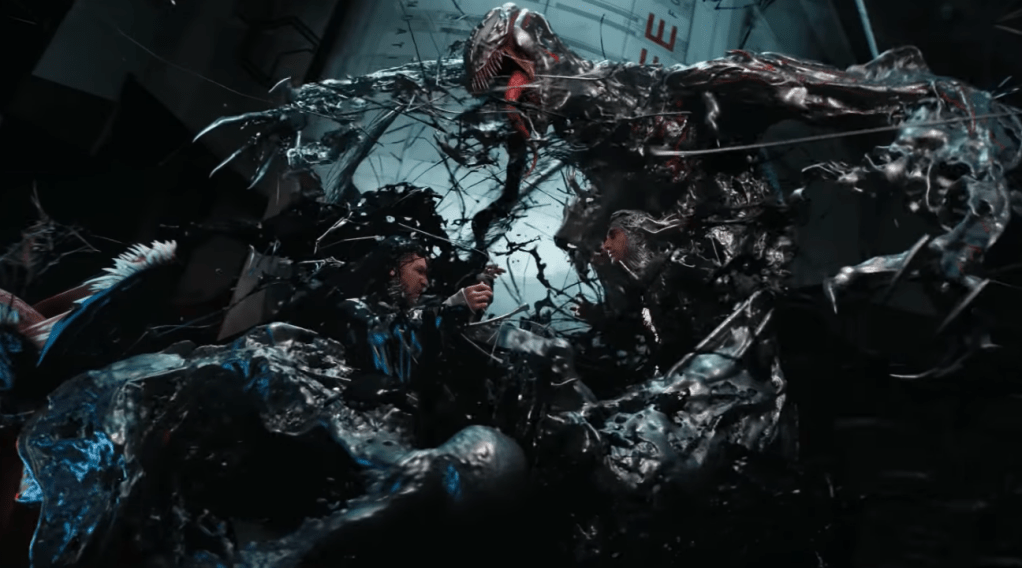 The trailer’s biggest reveal is that of the film’s villain, who, in early comic book movie fashion, shares powers similar to the hero. While speculation pointed to the symbiote serial killer, Carnage (whom Woody Harrelson is rumored to play in a cameo), Venom will instead face off against Riot, who eventually finds a host in Ahmed’s Carlton Drake. Drake and the existence of multiple symbiotes is another concept born out of Lethal Protector. In the comics, the Life Foundation is a corporation consisting of survivalists, who construct Doomsday-proof bunkers and protective devices for society’s upper crust. Drake sees “a planet on the brink of collapse,” and believes symbiotes are the answer to humanity’s evolution and ability to survive the fallout of impending nuclear catastrophe.

Drake’s comic book counterpart kidnapped Venom and stole seeds from the symbiote to create five offspring: Riot, Scream, Agony, Lasher and Phage. While the filmmakers dropped hints at Comic Con that more symbiotes may show up, the one we see Venom face off against in the trailer is Riot, who jumps from host to host and has the ability to create weapons with his arms. It’s also worth noting that Brock’s ex-wife, Anne Weying (Michelle Williams), also received a symbiote of her own in the comics and became She-Venom. While the teaser and first trailer left fans worried about how much full-on Venom action there would be, this latest look proves they will be getting plenty of symbiotes.

Venom is exciting not only because it’s not yet tethered to the weight of a larger universe, but because it offers a distinct tone that isn’t attempting to appeal to everyone yet offers an entry point for willing newcomers. Embracing the horror-comedy elements of the character in a way that feels like a tribute to the films of John Landis and Joe Dante, Venom feels deviant and weird in a way we rarely see of comic book adaptations anymore. This renegade comic book movie might just prove Sony has a handle on these characters after all.

What's Missing From the 'Venom' Trailer