On March 19, 1934, The Hollywood Reporter published a special issue devoted to screenwriting, featuring the voices of industry notables on trade topics such as “Should Writers Produce?,” mulling censorship (“Sense or Censors”) and discussing the craft of writing for the big screen. Author Vera Caspary, who had published several novels by this time and had seen stories adapted for film, tackled a pressing question: should writers devote time to original stories to pitch to studios? Caspary’s full guest column is below:

I have been warned more often against the dangers of writing movie originals than I have against the pit falls of drink, dope and loose living. Nearly all of my friends have taken me aside at some time or other and warned me, “Don’t write originals.” Even studio editors who had telephoned the day before and wanted stories in twenty-two minutes for Janet Caynor, Marlene Dietrich and Rudy Vallee, have become confidential over the third highball and whispered, “Because you’re a good sport, I’ll give you the lowdown. There’s no use writing originals.”

In spite of all of this, I notice that originals continue to sell, to be made into good pictures and make money for the companies. I sell them myself. Not all that I write by any means, but three out of six, and considering the amount of work in an original as compared with the work in a play or a book or short story, the percentage represents a very good way for a writer to make a living, particularly if he wants a lot of spare time for his writing.

A lot of people think that the writing and selling of originals, but particularly the selling, requires a secret almost as precious as the secret of the alchemist’s stone. Since I have had some luck and a lot of pleasant publicity, I have been pestered with requests that I collaborate, help or reveal the secret that will enable the others to share my good fortune. And I am a good-hearted wench so I read all their stories, at the risk of some day being called a plagiarist, and I find in nine cases out of ten that they haven’t an idea that is suitable for a screen original any more than the Antigone of Sophocles would be a story for Jimmie Dean.

An original, in order to catch the jaded fancy of editorial boards and producers, must be a whole lot better as story material than the novel, magazine story or play they would buy without half so much deliberation. The novel or magazine story that has been printed, the play that has been produced, have already received the benediction of investment. Some publisher has put money into plates: some producer has paid a cast a couple of weeks’ salary anyway and invested in sets, costumes and guaranteed theatre rental; the story must, therefore, have some merit.

But an original story that comes to them, with no other recommendation than an agent’s name on the blue or red or brown paper binder, must be as tight structurally as a first-class murder mystery, it must have as many twists as a French farce, and it must be as rich with revelations of human weakness and human greatness as a Priestley novel.  If a stage play is built around one situation with three or four minor situations building it up, the screen original must have two or three big situations in it, with ten or twelve sub-climaxes, contributing to the excitement.

There are two ways of catching the interest of these jaded story editors. One is by the presentation of a striking idea, the other is the construction of a solid story. A great many originals are presented as ideas, the stories built after an option is bought, and frequently a whole staff of writers engaged merely to build the story frame.

To my mind, and I am often wrong, the worst pictures result from this method. For even the building of stories for canned entertainment is not a completely mechanical job. When a lot of tired writers get together and wearily dig out situations that were good in other plays, books or pictures, the result is canned drivel that provides vehicles for famous stars and drives the poor spectators home, bored and bitter.

The other method is the submission of a manuscript to studios after a story is completely worked out. From a writer’s point of view, this has one big drawback. While the editors and producers may like his idea, they may object to some point in the story and therefore reject the whole manuscript. On the other hand, that gamble is worth while because the other elements of the story may attract the buyers.

And the main objection to an idea, submitted forlornly and by itself, is that no idea is sacred. This is not an accusation. It is merely a statement. Ideas are contagious, like measles. John Jones and William Jones read the same newspaper every day, hear the same radio program, are influenced by the same sounds and smells and colors. What I wonder at is how two people in this standardized world ever have two completely different ideas.

An idea is easy to steal, it meets its double in the first editorial room, it is worthless as soon as it is talked about too freely, and if it isn’t talked about, there is no chance for it to be acclaimed. A good story, on the other hand, is a solid possession, a property, and the idea from which it sprang retains its vigor, originality and importance because it was not forced into the stereotyped model.

The prejudice against originals is not all the fault of the editors and producers. So many stories are just so much garbage. Either an inexperienced writer is looking for an easy way to make money without learning how to construct, or a weary author has to make payments on his house, his automobile and the wife’s fur coat, and he doesn’t want to bother with dialogue or prose rhythms.

But there are some first rate original manuscripts. I have seen a few, written by experienced and careful writers who understand the needs and limitations of the screen, that were much better as stories, as dramatic frames, and as writing than ninety-nine out of a hundred magazine stories. Unfortunately there are not many of these, and more unfortunately, the producers will not give them as much consideration as they give printed stories far less appropriate for the screen.

While this prejudice exists, the writer who wishes to sell an original, has to take a tremendous gamble in writing his story. But what writer doesn’t take a tremendous gamble? Plays, magazine stories, books are certainly gambling chances. Original screen stories do not take as long to write as any of these others, although they take longer than most writers are willing to believe.

Because the prejudice exists as a tremendous handicap which must be overcome, original screen stories have to be better stories than a great many printed tales. They do not have to be written so well, for good writing will not sell them. They must be clear, however, emphatic and logical as any good mechanical story is logical. There is a technique of presentation that is individual and economic, and the manuscripts should be as finished, in their way, as stories submitted for the printer.

A first-rate original for the screen is as spontaneous as any novel or play idea. It is not an old novel idea, squeezed into a few pages, to avoid hard work; it is not the outline of a play discarded because the author could not fit it into the dramatic form.

A screen original is an original story, conceived for and fit- ting the screen. It fulfills the standards for stage plays inasmuch as dramatic construction is concerned, but like the novel, it can show a number of people in a number of places, heightening dramatic interest by its flexibility. It has, like every other form of writing, its limitations, and often its very flexibility is one of its greatest limitations.

But the time will come when authors, and producers, too, will realize that the screen is a medium for an individual and original method of story-telling. When that millennium arrives, the writers will respect the screen form enough to realize that it deserves better than the cast-off, worn-out plots that turn editorial boards bitter at mere thought of originals; and the producers will see the screen story as a screen story, and not as a vehicle that was holy because it was printed, and therefore, twisted and contorted, can make a better picture than a story planned and written for pictures.

In the meantime, spontaneity gets its chance occasionally and, while they keep on telling you there is no chance for originals, they continue to live up to their whimsical reputation by producing them. 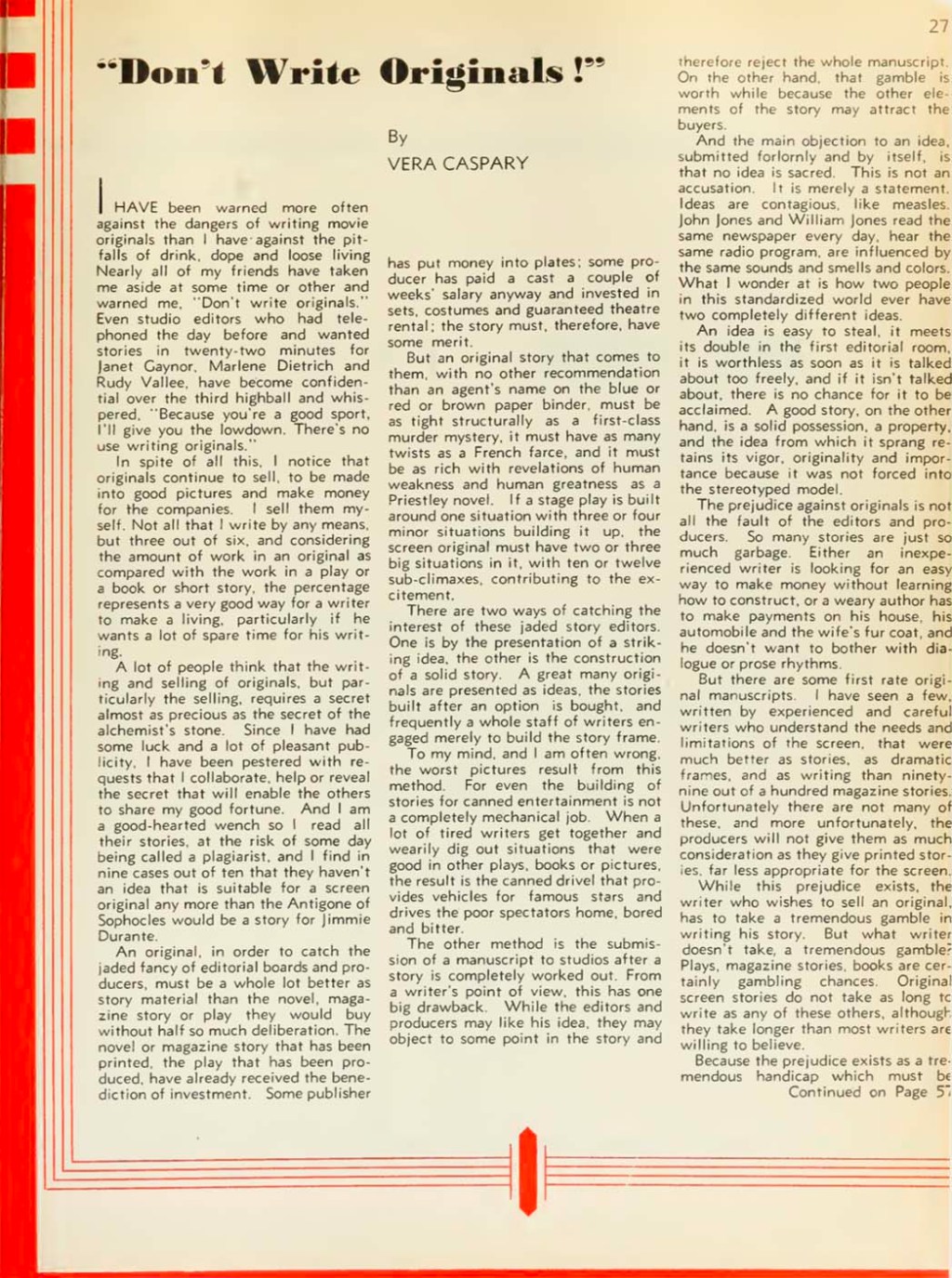 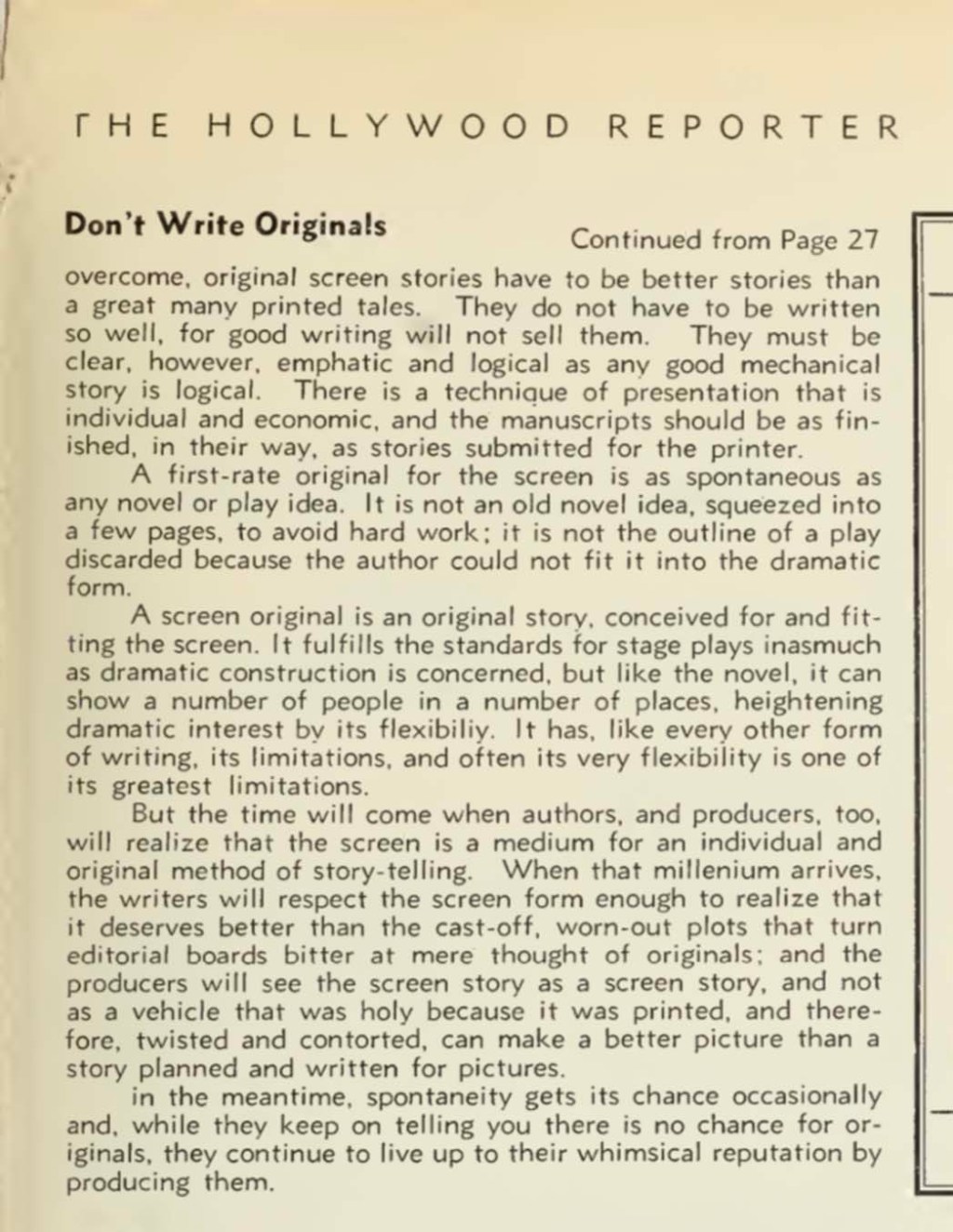 Vera Caspary, an author and screenwriter known for mystery stories including the novel that became the 1944 film Laura, wrote this column for the “3rd Annual Writer’s Number” special issue of The Hollywood Reporter on March 19, 1934.