Even with heaps of critical praise, a long list of hit projects and a mountain of awards on her mantle, including an Oscar, Emmy and two Tony Awards, Viola Davis said she has long struggled to feel worthy of such praise.

“What makes it an easy pill to swallow is when I think about people like August Wilson, and I think about directors like George C. Wolfe and Denzel Washington,” said Davis on Wednesday night while accepting an Icon Award presented by AdColor from the African American Film Critics Association during the group’s 12th annual awards presentation. “And the reason why I say that is my acceptance of any of this praise is equal to my absolute passion to leave a legacy. A legacy for brown-skinned girls just like me who were told that they were invisible.”

Davis accepted the honor during a private two-hour virtual telecast for her work in Netflix’s Ma Rainey’s Black Bottom directed by Wolfe and co-starring Chadwick Boseman, who was also feted during the show as best actor. She thanked Boseman, her fellow castmembers, Netflix and its top executives Ted Sarandos and Scott Stuber, and all the “beautiful people in my life who see me.”

“It’s been the ride of my life to have this career. I have been blessed and fortunate in every single way to be able to literally give you all the human beings, the black and brown human beings that I’ve embodied and to give them to you and to help you to feel less alone through their stories. I will continue to leave a legacy of hope, of life, of humor, of pathos, of humanity for as long as God will have me here,” continued Davis, who is nominated for a best actress Oscar this year. “I just want to say this one thing, because of this past year and everything that we have been through, what the caterpillar calls the end of the world, the master calls the butterfly. We have within us, all the tools that are necessary to elevate our lives in the most unbelievable profound ways. I have found it through my acting, but my God, we can find it through every area in our life.”

One Night in Miami was honored with three awards: best director for Regina King, best screenplay for Kemp Powers and best ensemble. Andra Day was named best actress for her work in The United States vs. Billie Holiday. The full list of winners can be found here.

The honorees were announced in advance, leaving just the acceptance speeches as the big reveals during an event hosted by Tichina Arnold, J.B. Smoove and Tone Bell and sponsored by Nissan and Morgan Stanley. Though nearly everyone who accepted could be seen reading from prepared remarks, Mariah Carey still fought back tears while she offered her thanks for the honor of taking home AAFCA’s Innovator Award presented by Nissan.

Following gushing remarks from close pals and collaborators like Gayle King, Naomi Campbell, Lee Daniels, Roman Coppola, Misty Copeland, and Raj Kapoor, Carey offered her own and seemed genuinely touched to be singled out on the heels of her critically acclaimed Christmas special for Apple TV+ and her best-selling memoir, The Meaning of Mariah Carey.

“It is an honor to be recognized as an innovator because in my experience when you have holes in your only pair of shoes and are existing on a dollar a day, choosing between food and a subway ride, when you are the only one who believes in your vision for yourself, you better get to innovating,” she said with a smile. “I, like so many African American artists, we create out of necessity, out of pain, out of hardship. We create out of having nothing. Nothing but the ability to believe and that is the power, that is the blessing, that is the ultimate emancipation.”

She called her children, Moroccan and Monroe, her greatest innovation and inspiration. She also dedicated the award to all the loved ones and family members who ascended this past year, “who we have yet to get justice for, who we couldn’t send home in the way we’re used to,” she said.

Then came the part when she choked back tears. “And on a very personal note, my cousin Vinny, LaVinia Cole, who I really wish could’ve lived to read my memoir, The Meaning of Mariah Carey. Her recollections called my ancestors forward who I know carried me through that process. If we have faith as a mustard seed, nothing is impossible to us. Oh, and by the way that’s Matthew 17:20, not trying to take publishing from the good book. Love ya, appreciate ya and enjoy ya!” 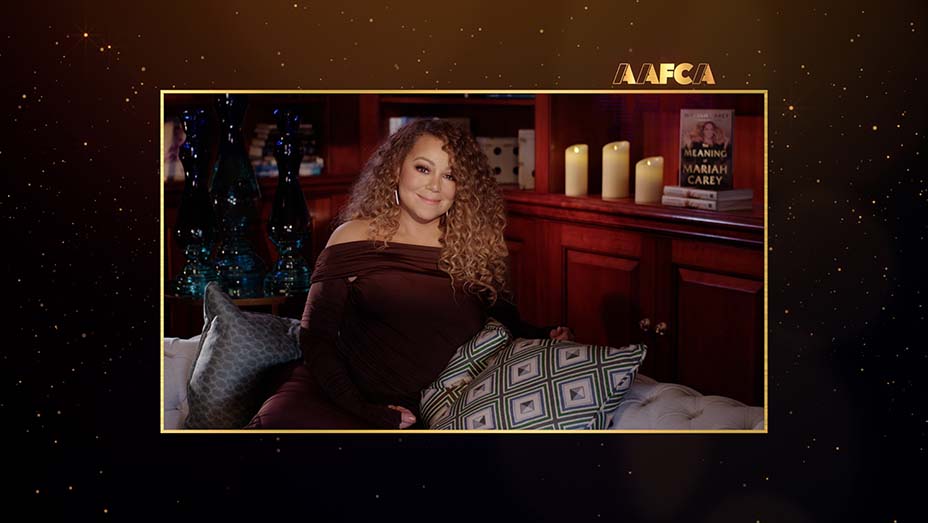