The world has completely changed since Imogen Poots wrapped her latest starring vehicle, Vivarium, in the summer of 2018. And yet, the mind-bending sci-fi film — which hits digital HD and VOD on Friday — has an astounding number of real-life parallels to the global confinement and isolation that so many people are experiencing right now during the novel coronavirus pandemic.

The English actor plays Gemma, who, along with her partner, Tom (Jesse Eisenberg), become trapped inside a suburban housing development they merely visited by way of an eccentric real estate agent (Jonathan Aris). The couple must survive on a rationed amount of predetermined food and supplies that mysteriously appears on its own schedule. Poots certainly recognizes the similarities to our present reality.

“It is peculiar to be a part of something which, at its release, is certainly in line with how some people are feeling,” Poots tells The Hollywood Reporter. “Even though they’re in hell, these two still have a roof over their head, which counts for something. But, yeah, it’s a deeply strange topic of isolation and also, how the things we thought mattered perhaps fall away a little bit.”

Following 2019’s The Art of Self-Defense, Vivarium is Poots’ third film with Jesse Eisenberg. Once the starring role of Gemma was offered to her, Poots quickly thought of Eisenberg for the role of Gemma’s partner, Tom. Much to her surprise, Eisenberg was willing and able to support Poots, who’s truly the lead of the film.

“Luckily, he was available and up for it, which I’ll say is super cool,” Poots explains. “On the page, it was certainly a female-centric film in the sense that Gemma had been written as ‘the lead’ or what have you. It’s quite rare for a male actor to say, ‘Yeah, I’ll play the other part….’ So, it was really, really cool and supportive that he was up for it.”

In a recent conversation with THR, Poots also discusses Vivarium’s unique shooting arrangement; her affinity for independent film and her “desert island band.”

Imogen, how is everything with you and yours?

It’s all right. I’m in London. I was in New York last week for a few days; I was supposed to be there for months, but I made the decision to hop back to be near folks and stuff.

Oddly enough, Vivarium touches on the very isolation that most of us are going through right now. The movie even has rationed amounts of food and supplies, and much like us, the characters have little to no control over that supply. Has life ever imitated your art to this degree before?

I always think you find something, and sometimes you have to work harder to discover it. Certainly, there are many plays out there, theater, that are about relationships, which we can all relate to. But, this is very specific. The thing about sci-fi and genre in general is it’s always further away than arm’s length; I think that’s why we indulge with it so much. Obviously, we’ve got things like climate change and trips to the moon, but fundamentally, it’s a genre that’s suspended above reality. So, it is peculiar to be a part of something which, at its release, is certainly in line with how some people are feeling. Even though they’re in hell, these two still have a roof over their head, which counts for something. But, yeah, it’s a deeply strange topic of isolation, as you say, and also, how the things we thought mattered perhaps fall away a little bit. The perspective becomes a little more realized on everything.

Vivarium is your third movie with Jesse Eisenberg (after The Art of Self-Defense, Solitary Man). Did the two of you pursue this project together once it became available?

So, we had done The Art of Self-Defense together the year prior, and I loved working with Jesse. Vivarium came my way not long after that, and I thought Jesse would be awesome to play Tom. Luckily, he was available and up for it, which I’ll say is super cool. On the page, it was certainly a female-centric film in the sense that Gemma had been written as “the lead” or what have you. It’s quite rare for a male actor to say, “Yeah, I’ll play the other part….” So, it was really, really cool and supportive that he was up for it. That’s how it came about, and we got to work not long after that. He’s amazing that way; he’s so loyal and cool.

Given the unique production design, were the interiors and exteriors of the house shot on a soundstage?

The exterior was shot in Liège, Belgium, which was on a soundstage. That was really trippy because it was really hot outside. We were filming inside, and we had these three houses which they then CGI’d to multiply. There were cables everywhere, and we had a Danish special effects crew who were running around with silver globes and batteries; it was very peculiar. And then, we shot the interiors in Ireland. It was very strange. I guess somebody financed the outside, and somebody else financed the inside. It was something mad. (Laughs.)

While neither is easy, independent film has a higher degree of difficulty than most studio films since you don’t have the resources or amenities of a major studio. Thus, is there a greater feeling of satisfaction or fulfillment when you’re able to make a good independent film without the many luxuries of the studio system?

That’s an interesting question. I agree with you; I do think the studio system has luxuries in terms of the budget — and the snacks are great. But if you don’t have someone to helm the project with a clear vision or someone who is able to execute their vision as boldly as they would want, then that film can also fall short. So, I don’t know if it’s really a measure of whatever you and I perceive to be “a good movie.” The studio films, despite all of their amenities, can still fall flat. In terms of the pressure, you’re obviously far more up against it, budgeting wise and schedule wise, but it doesn’t necessarily mean that the film won’t surpass expectations and be brilliant. I really think it comes down to the people behind it and who those people are supported by. I’ve been around a long time — and I’m aware of the whole box office question — but there’s no way a movie like ours would ever enter into that world. It’s the perennial question, isn’t it? Is art better served with more money and more time? Or, is there some sort of catch to having that guerrilla filmmaking where everyone’s heart is on their sleeve to make the best movie they can and pull off the impossible with blood, sweat and tears. There’s some sort of satisfaction to that mania, I think.

Even though you’ve done plenty of studio films and TV series, do you feel most at home or suited to independent film? I say this as someone who enjoys so many of your independent works.

Thank you. I feel part of a tribe, and it’s a tribe I’m really proud of. You work on one movie, and maybe that filmmaker’s friend is doing something else. There’s a community that’s really, really supportive and really invigorating to be a part of. But things have changed for me, personally, over the years. When I was younger, I was more snobby about movies, and I thought that real art had to be hard and difficult; you wouldn’t have fun doing it. Then, you grow up a little bit, and you recognize the value in something that’s able to help you make sense of the world, whether that be a big, shiny franchise or whether that be the tiniest movie drenched in metaphor. It doesn’t really matter because, ultimately, you’re bringing the same effort to your work. I will say that there is something really cool about the humanity of independent filmmaking; it’s the love of being there. You never really know with independent movies if you’re going to be shut down the next day. It’s so touch-and-go, and I think that gives you a real drive.

Since Vivarium is open to interpretation, did you ask the writer and director what their intent was, or do you prefer to have your own interpretation like the audience?

I think it’s hard to tell someone when you’re in it, and I don’t know how helpful it would be to know what other people made of a moment. Ultimately, the director may not even know. I think they would know what they wanted to see, visually, or what tone they wanted to capture, or what feeling they wanted to imbue the film with. What was important for our director [Lorcan Finnegan] was to have different options. The film’s setting is so absurdist, larger than life and abstract that it was important to have really truthful and grounded performances at the center of it. So, all that I could focus on was the truth of Gemma in those circumstances — rather than “Wow, this scene is a metaphor for motherhood, or this scene is a deconstruction of paradise….” It wasn’t helpful to be cerebral, but after the fact, you can enjoy those parts of it. You can also enjoy it as a “fever dream,” which is what Jesse refers to it as. It’s very much like a Black Mirror episode or something like that. 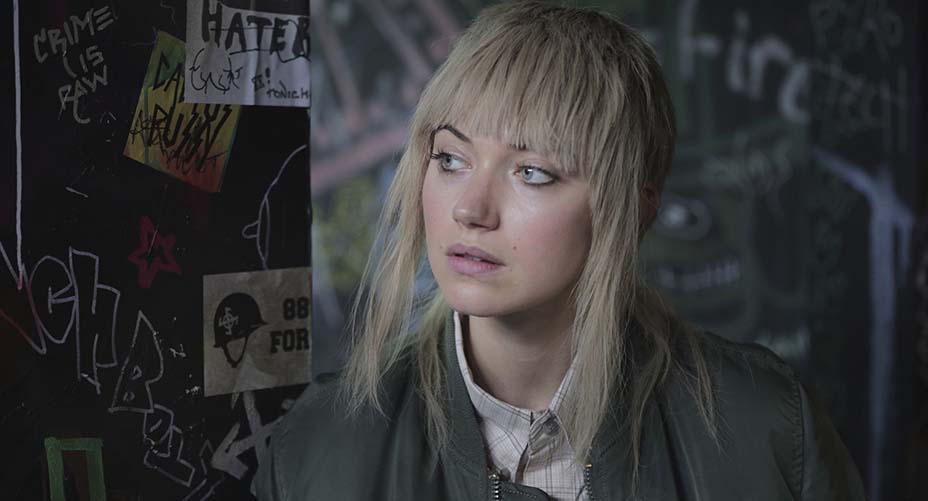 In honor of Green Room, do people often ask you what your desert island band is?

You know, I never get asked that question. I never get asked; it’s so sad. It’s such a good question. I would’ve said The Smiths for a really long time, and The Queen Is Dead would be the album. But, Morrissey has disappointed me, man. He’s really saddened me with his views. So, I’d have to go for This Is the Day by The The, which is kind of a nod to The Smiths’ Johnny Marr. That’s one of my favorite songs of all time.

Well, since Green Room is on Netflix, I hope people catch up to it during their quarantines. That way, you might get the question a bit more.

(Laughs.) Yeah, because people really need to see a bunch of people trapped in a room right now. That is what they need.

You got me there. I suppose I’m still getting used to the fact that the context of our lives has completely changed.

Vivarium is now available on digital HD and VOD.