To shoot Voyage of Time, Terrence Malick’s documentary about the birth of the universe, cinematographer Paul Atkins had to go some places he’d never been to before — like the edge of a lava-spewing volcano in Hawaii.

“You had to helicopter into the erupted area,” he says. “You’re walking on a crusty surface, but right beneath that is 2,000-degree molten lava. If you stand in one location too long, it can literally melt the soles of your boots.”

A veteran wildlife DP who has worked on projects for National Geographic, the BBC and Imax, Atkins met Malick in the late ‘90s at the Jackson Hole Wildlife Film Festival. They kept in touch and would talk about Voyage as Malick researched the idea. They also worked together on Malick’s The Tree of Life, photographed by three-time Oscar-winning cinematographer Emmanuel “Chivo” Lubezki, with Atkins as second unit DP.

How Episodic TV Docs Are Muscling in on Oscar

Two versions of the film have been made. Voyage of Time: The Imax Experience is a 45-minute movie narrated by Brad Pitt, while the 90-minute Voyage of Time: Life’s Journey was created for ordinary screens with narration by Cate Blanchett. To bring these visual journeys to life — from the Big Bang to the dinosaur age to our present world — Atkins began by reviewing photos, paintings and other images that Malick had assembled.

“He was striving to get something different,” the cinematographer explains. “It was important to Terry that this movie not appear like a TV or BBC wildlife documentary.” 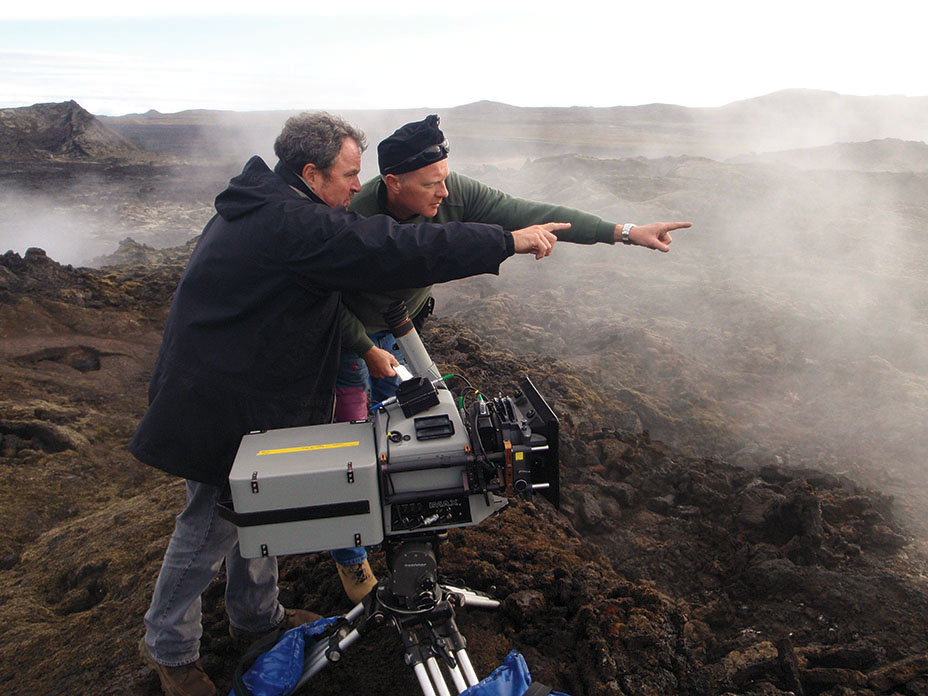 Atkins also drew inspiration from what he learned on The Tree of Life from Malick and Lubezki (with whom Atkins worked more recently as second unit DP on The Revenant). “They have a method they refer to as ‘the dogma’ that involves shooting in the backlight, shooting in deep focus with wide-angle lenses, so you get the feeling you are actually there. On the Imax screen, you can scan around the image and decide what to look at. That’s what we wanted.”

Location work on Voyage involved stops in Iceland, Chile, Palau, Monterey Bay and around the U.S., including the California Redwoods. Back at the volcano, getting the wide-angle shot in deep focus “meant getting the lens as close as possible,” says Atkins. “We held the shot until the last second and then ran across the lava field to a cooler area to reload. Then we realized the soles of our boots had peeled back and our socks were exposed. We duct-taped the soles back on so we could go out and shoot again.”