John Cena is larger than life in the WWE, but in The Wall he takes a smaller approach.

In director Doug Liman’s The Wall, Cena’s Army sniper character is sidelined by an enemy sniper early in the film. That sets the stage for a game of mental chess between a soldier played by Aaron Taylor-Johnson and an unseen Iraqi sniper (Laith Nakli) who torments him over the radio waves.

Even with limited screen time, Cena’s role is crucial and his stirring performance gives the audience a reason to care deeply about the fate of the two soldiers. The role follows breakout performances in comedies Train Wreck, Sisters and Daddy’s Home — and is a prime example of Cena’s philosophy that he cares about the project above his own ego.

NBC Renews 'The Wall' for Another 20 Episodes

In a conversation with Heat Vision, Cena also discusses why he’d love to play WWE CEO Vince McMahon (but probably won’t) and the complicated nature of war that he hopes this film will bring to the public.

Your role is essential, but Aaron has much more screen time in The Wall. Does that take humility as a performer?

I don’t believe in the philosophy of you need to be at the forefront. If you look at my position in WWE, certainly, there are some who argue I am steering that train, but if you look at the brief arc of my career, even in the past few WrestleManias, I got to main event with The Rock two years in a row, and then was kind of put down in the middle of the menu for a while, and that’s kind of where I still am. And I don’t, not for one second, hang my head. I take each and every single opportunity to go out there as an opportunity to be able to do something really cool, and that’s what I look at. I certainly don’t look at something as, “Well, I don’t have enough screen time.” I read the story, I loved the story, and I wouldn’t care if I was playing the part of the dead guy on the radio … I didn’t really have a lot of screen time in Train Wreck, I was in Daddy’s Home 2 for two seconds. I wasn’t in Sisters a lot. But I was happy to do all of them. And we’re filming a movie right now in Atlanta called The Pact, which has a loaded cast. And I’m very, very happy where I’m at. It’s not a situation of, “Hey man, out of my way. I need more screen time.” It’s like, “no this is a really good story and I get to be a part of that.”

What are your aspirations as you go forward with acting? Is there a dream role out there?

There is a story out there about the life and times of Vince McMahon. Man, I think it is a wonderful script from word one. But unfortunately, that would be something I’d love to do, but I feel maybe a different actor should do that movie, just because of how powerful the story is, and I would hate for the audience to feel that it is a WWE-produced product. And that’s not in a bad way, it’s just I want them to feel the emotion that I felt reading the script. I can just tell you that it’s out there and that it’s awesome and man, if it were all different, I would certainly love to step into Vince’s shoes.

The Wall hinges on you and Aaron’s character demonstrating the bond you have. How did you establish that?

My schedule was busy as hell, but Aaron did really good to work around my schedule so we could hang out a little bit. And that helped a lot. And we had Nicholas Irving, who is an Army Ranger sniper, on hand, and in the down time we would talk to him, not necessarily about tactical stuff, about the real-life stuff of being a soldier. And he would tell us stories. We would get so invested in the stories, we would take some of the banter away from the stories and we would make it our own. That back and forth between two guys with the undertone of super macho bravado, but both of them still in an area of conflict where your life is on the line, I don’t know man. For some reason, it just all clicked and it clicked really fast.

This takes place in 2007, and for many civilians that seems like a long time ago. Are we still recognizing the troops much as we should?

When civilians watch it, they do get a bit of a re-education process of how intense and powerful combat can be, even the game of psychological chess. In times of unrest, we seem to come together as a nation through great patriotism and in times of peace, we seem to fall back a little bit. That’s perfectly natural because it’s not at the forefront. But there are still men and women out there protecting the freedoms we live under. If it does anything to re-stimulate that appreciation, I’ll be very thankful. 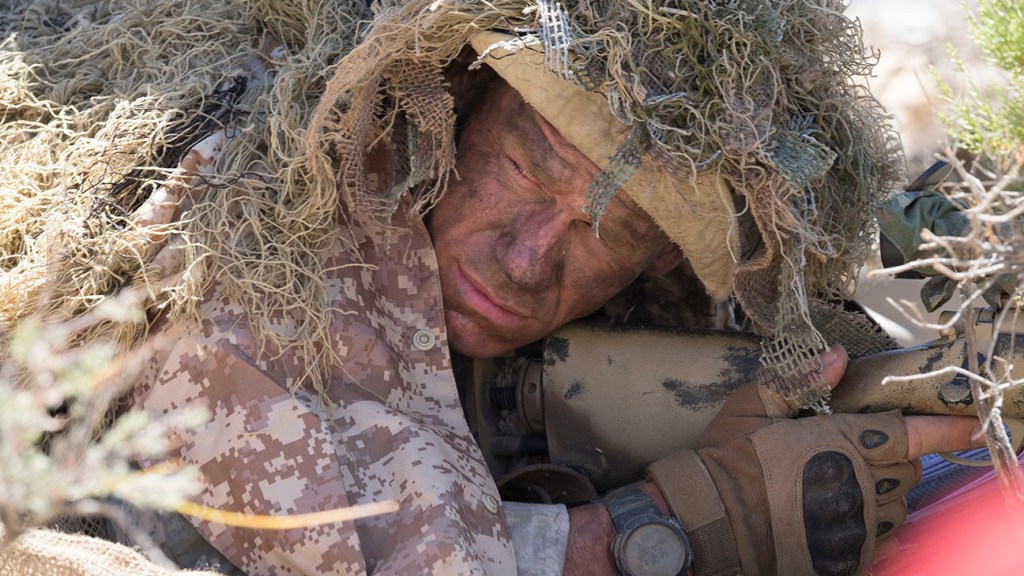 The antagonist in this film has some interesting points, and you do understand him. I imagine the complicated aspect of this film was a draw for you?

Often war movies do that, certainly Saving Private Ryan when you get the view of the other side of the fence, certainly Platoon. Full Metal Jacket, another one. It is combat. I can only relate it to sport, and that’s a very, very horrible reach. But I just go off of life experience. You can play, and I played football, a direct contact activity — you fight across from some guy for four quarters and you kick the dog shit out of each other, and then at the end, you kind of shake hands. Or you don’t, in some instances. So it’s very complicated. And I actually hope that’s what people take away from this. I hope they put on their thinking caps and have a greater appreciation for what our men and women do out there, but not only that but get a deeper perspective.

With your busy schedule, were you there for the whole shoot or did you take off a bit?

When you say take off, I did. It was to host the ESPYs. I think I shot 10 of the 14 days or something like that. And the days that I didn’t, and including the weekends, it was rehearsing and writing jokes with the wonderful writers of the ESPYs, and I literally hosted the show, and I have a nice side-by-side picture of myself in the evening in a tux and in the morning covered in shit in the desert. We spoke about humility earlier. There’s nothing more grounding than that. Being a one-man show out there, to run a live program, tux and tails, and then go out and get the shit kicked out of you laying in the dirt for a little bit. It was a great experience.

The Wall is in theaters now.