In Tara Miele’s Wander Darkly, the writer and director offers a moving look at relationships by following a couple who must reflect on their past in order to face an uncertain future.

Sienna Miller plays Adrienne, who in the aftermath of a traumatic car crash, finds herself on a disoriented journey, reliving her relationship with longtime partner Matteo (Diego Luna) through fragmented memories. The two are forced to confront their troubled relationship, flicking through events of the recent past and debating who was right and who was wrong in many instances.

In a recent conversation with The Hollywood Reporter, writer-director Tara Miele opens up on the existential drama that vividly explores how we navigate love and loss, inspired by true events in her own life that gifted reflection and gratitude.

The film has a unique perspective on love, following a couple through their relationship and revisiting both beautiful and heartbreaking moments. Why did you want to tell a love story this way?

The impetus for the story was very personal. My husband and I survived a pretty bad car crash about seven years ago. I was heavily concussed afterwards and there was something about the concussion and the unreliability of my own head for the months that followed the accident. Also an inspiration was the negotiation of a relationship where there’s two different versions of the truth and you’re not really sure if you’re crazy or if you’re thinking are we even supposed to be together? Is this the right thing? There is no right answer to that question, right? No relationship exists in stasis. It’s constant peaks and valleys. I don’t know anyone who really plateaus. I was interested in the loss of love and the loss of life and how you sort of mourn both of those things in a real deep way. Also the psychosis of grief and how that sort of parallels with the state of a concussion. I had read Joan Didion’s The Year of Magical Thinking. It was really astounding to me the way that she was talking about some of the same things that I was really interested in exploring, specifically how our brains work to protect us from trauma and how we all kind of embrace that craziness and just know that time will heal it. That we just accept that. Those were the things that I was interested in playing with — the way your brain works in love and in loss and in an accident after trauma so similarly. It fascinated me.

What perspective did your being a mother offer that you expressed in this film?

I think it made an enormous difference in who I am as a person. My daughters at the time were six months and just four year olds when my husband and I got in the accident. I have never had such a clear sense of the importance of my own mortality. The stakes had never been so high. When I was recovering from the accident, I recognized how grateful I was to still be there. When you have young children, I think media wants to portray it as so romantic and it’s so difficult. I think especially on moms who are isolated. I mean, they’re basically in quarantine, right? You’re like stuck in your house. You’re all alone. You don’t know if the world will ever have you back or if you’ll ever be the same. It’s quite a disorienting experience. It’s hard to appreciate it sometimes in real time. So after the accident, you know, while my family was all fighting at Thanksgiving and the kids were crying, I just burst into tears because I was so grateful that we were still there and that we were still living these messy, delicate, fragile little lives that we were lucky enough to still have. I think that it’s that awareness of how much it takes to bring life into this world as a mom. It gives you a new appreciation for how important it is to take advantage of it, to love it. 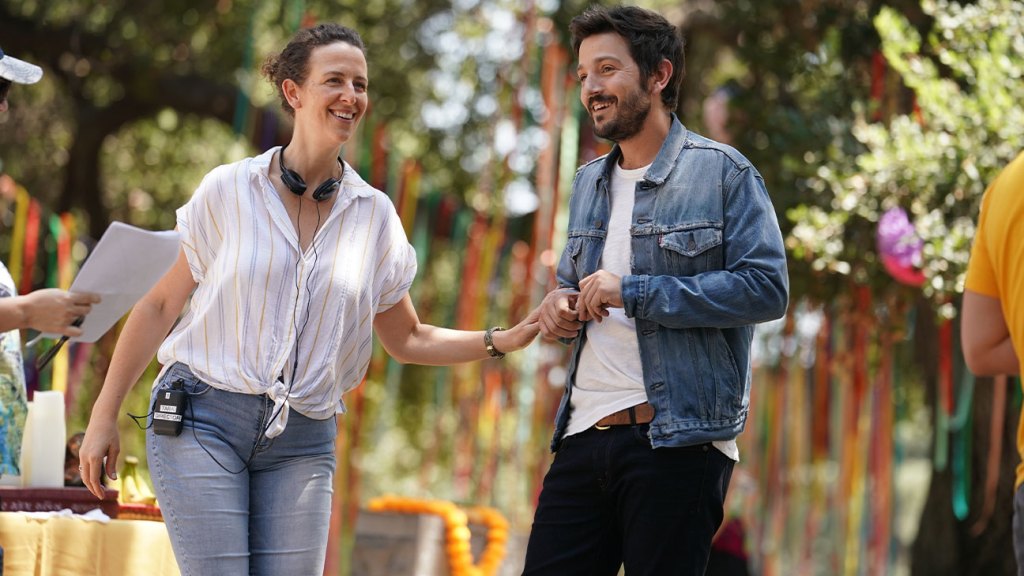 That makes sense. Wander Darkly shows so well how there are so many moments in our life that for us, it’s a blip, but you would do anything to have it again if you knew you were going to lose it.

Yes, that’s right. That’s the thing. Death is this the ultimate truth? It really makes life sweeter. If we ignore it, it’s easy to think we get this forever, but we don’t get this forever. It’s finite. That’s what makes it all the more beautiful and special and precious. I think living with that truth, you either have trauma in your life and you say woe is me and why me or you say thank you for what we had. Thank you so much for what I have and try to appreciate it. I think that’s the trick that I am certainly still working on every day.

What goals did you have for the project overall as you started?

At the very start,  this was one [project] I wanted to do for me and I didn’t want it to get diluted or watered down. I wanted it to be as authentic and raw as I could make it and as real to my experiences as I could make it. Certainly the dolphins were very important to me that we try to get that. There was a point in our prep where just being in the reality of a 24-day shoot in Los Angeles on a low-budget movie where we were feeling, well, maybe we don’t get the dolphins. I had to draft a scene without them at some point. But we did get the dolphins.

That’s great because both scenes of them — with Matteo and Adrienne watching them from a boat, and later Adrienne with her daughter — are so precious. Essentially both are moments that one might take for granted otherwise.

Yeah it was one of those things where I felt like we could do it. One of our producers, Monica Levinson, said I know a guy, Captain Dave, he’s the dolphin guy. I was like great, let’s call Captain Dave. It’s so funny though. So much of filmmaking is you have to have this real hope that you’re going to get what you set out to get. We had all these boats set out at two in the morning, waiting for the sun to come up and chasing dolphins. Dave found them on the horizon and had the cameras rolling. There were so many dolphins. It was really beautiful. 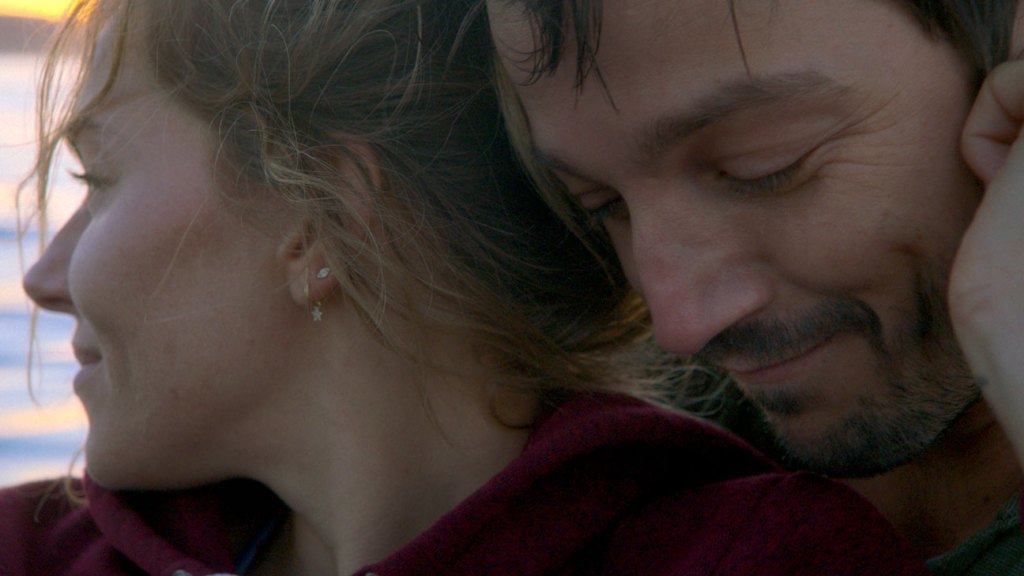 Absolutely. I honestly cried at both dolphin scenes because they are so pure and innocent. Along with that scene, as you were writing, were there any others you were anxious about filming? Or most excited to film?

I think as a writer, I’m pretty good at like making problems and being deluded about the fact that they’re problems, which I think is incredibly healthy. Like I do not think about production when I’m writing. I literally just… the sky is the limit, anything’s possible, which really sets me up when I go to set and I’m like, oh God, we have to wake up this baby right now. Or we have to get up in the middle of the night to get on the boats or whatever. So there were certainly things that when I showed up as a director, I was like, oh we have to do that and I probably wouldn’t have scripted if I had thought through how challenging that is. I’ll only say this because I’m a writer and a director, but I think writers make problems and directors solve problems.

Sienna Miller and Diego Luna are heartbreakingly mesmerizing in this film. What scene was the most memorable to watch them play out?

I have to say the scene where Adrienne’s trying to see what she’s going to wear to her own funeral and she can’t zip up the dress. It took us a long time to film it and get into the rhythm of it. It was a lot of conversation, a lot of discomfort of the strangeness of the moment, but it’s all that much more gratifying because we powered through it and actually the end of the scene changed from what was on the draft. Last minute, I had to change the transition. It was going into the Day of the Dead because it was just so beautiful what they were creating in real time. It was this gorgeous thing that was happening so I had to step back and let them do it. It was really exciting that they took these characters on under their wings. I was so happy to hand them off to someone who could care about them in such a full, deep way while I was, as a director often is, distracted with so, so many other things. It was really beautiful to watch them do that.

The film was shot in 2018 in Los Angeles and is now releasing at the end of 2020, which has been a year of great reflection for so many.

I definitely think we are in such a state of like deep mourning, you know, as a country. When you have personal loss, it does feel like the whole world stops in this way. I guess there is something just unprecedented about how we’re all feeling it together for this elongated period of time. But the truth is, as we all go through loss, we often just do it privately or personally or alone. It is crazy that Wander Darkly has hit this resonant moment and just happens to be the moment where everyone’s feeling something we often feel alone.

Do you feel this film’s message will be felt more so due to the pandemic and how it has caused many to be thankful for what they have?

I hope so. We’re all locked down with our nuclear families and in LA, especially, right now we’re super locked down again. I hope that it’s like a hopeful, helpful thing at the end of the day. There’s a catharsis about it that makes you look around at whoever you’re at home watching this movie with and give them a hug and feel a little closer.

With the ongoing pandemic, how does it feel to be able to release work this year?

I mean there is definitely something a little surreal about it. I’m not going to lie. I’m doing a full day of press on my computer tomorrow. I haven’t done that ever as a filmmaker. So there’s something surreal about it, but mostly I feel so incredibly lucky really because we premiered at Sundance before the whole world shut down. We were lucky enough to have these beautiful theaters full of audiences that, even in real time, you’re processing that when you’re there and it’s your movie and your family’s there and Sienna and Diego are there. And it’s such a big experience. I’ve been working 20 years for that. So, I felt very grateful that we got to have that experience. It does feel strangely perfect the way that this film is coming out, in the time it’s coming out. It feels essential. It feels purposeful and I hope it resonates that way for other people.