Before the release of The Wandering Earth, China’s first big-budget sci-fi spectacular, many in the Beijing film industry believed the movie would either rocket to historic success or crash disastrously.

As the first of its kind, the movie was certain to generate excitement. But the local audience’s pride in seeing Chinese heroes in outer space for the first time could just as easily turn to embarrassment, should the film’s production quality fail to measure up. China’s fickle filmgoers would be arriving at the cinema well versed in high-end Hollywood sci-fi thanks to the past local success of big-budget projects like Christopher Nolan’s Interstellar ($122 million) and Ridley Scott’s The Martian ($95 million) — or so the argument went.

Since opening Feb. 5, the first day of China’s Lunar New Year holiday, The Wandering Earth has earned $610 million, making it the biggest movie of the year worldwide, and the second-highest-grossing film ever at China’s box office. Some analysts believe it might even surpass 2017’s Wolf Warrior 2 ($854 million) to become China’s top-earning blockbuster of all time.

Given the way traditional Chinese culture tends to be associated with the ancient past — both domestically and overseas — the storytelling challenge of making sci-fi adventures culturally Chinese had always been perceived as a major hurdle. The Wandering Earth‘s story revolves around the imminent explosion of the sun, which has inspired humanity — with China leading the way — to attempt to propel planet Earth outside of the solar system in search of a new home. The film’s director, relative newcomer Frank Gwo, says this central conceit is what anchored the film thematically for the local audience.

“When the Earth experiences this kind of crisis in Hollywood films, the hero always ventures out into space to find a new home, which is a very American approach — adventure, individualism,” Gwo says. “But in my film, we work as a team to take the whole Earth with us. This comes from Chinese cultural values — homeland, history and continuity.”

Viewers worldwide will soon have a chance to check out The Wandering Earth thanks to Netflix’s acquisition of the film, announced Thursday. Gwo also will be in Los Angeles on Feb. 22 and New York on Feb. 24 to participate in Q&A sessions at several screenings of The Wandering Earth at AMC cinemas.

The Hollywood Reporter spoke with Gwo from his Beijing office both before and after The Wandering Earth‘s release. The conversation below has been edited for clarity.

What’s your personal connection to the science fiction genre — are you a big fan?

Yes, I am! Back in the 1990s, I saw James Cameron’s Terminator 2 and that had a big influence on me. It was then that I first made the wish to become a director of science fiction. I’ve spent the years since studying the genre and preparing for this.

How did you go about creating The Wandering Earth‘s sci-fi world?

It was a really long process. The difference between a sci-fi and a realist film, of course, is that you can’t just directly shoot the story — you have to build a whole world first, and a new futuristic worldview for the people who inhabit it. I began by writing everything out on paper, including the evolution of this world’s politics, culture and economy. We drafted an imaginary 100-year history, sketching out developments for every year. We explored details like what entertainment, sports and eduction would be like; how the physical environment, weather and topography of the earth will have changed. New technology — how it works and the basis for its invention — are probably the most important element of a science fiction story, so we made a dictionary of all of our world’s new technology and its function.

Writing all of this out took about eight months, and then we finally began creating corresponding images. We then produced about 3,000 concept design images.

What were your visual touchstones?

This part was difficult. We had to create something aesthetically different from Hollywood science fiction, because aesthetics are based in culture — and Chinese culture has a very different history and trajectory. For example, if we put our Chinese actors in an Ironman suit, it would feel weirdly incompatible somehow. China didn’t have the industrial revolution; our culture is rooted in a deeper past. The challenge was to develop an aesthetic system that doesn’t give you this feeling of incompatibility — we had to look for elements that Chinese audiences would feel comfortable with, including the colors and mechanical structure of the technology. The look we settled on is somewhat Russian in its heavy mechanics, but mixed with some of the high-tech, delicate feeling you get from Apple.

Fascinating. Were there other ways in which being the first Chinese sci-fi affected your approach to the world-building?

When we created the story, we also had to think about China’s national background as a country. Sci-fi is unique in the way that it raises these issues. If China were not far along enough in its development, we wouldn’t be able to produce a science fiction film that has huge visual effects, right? Similarly, if the country is not at a state of growth — or powerful enough — then it wouldn’t be plausible for the country to play an important role in helping to solve a global crisis, which is what science fiction movies are usually about. We had to balance these issues during the film’s creation, so that the Chinese audience would find the film both exciting and credible. We had to design our plot according to the actual competencies and direction of the country.

Did you consult Liu Cixin at all during preproduction or production? I imagine his many fans around the world would be curious to learn about his level of involvement in the film.

During the whole process of creating the film, he actually gave us a lot of space and freedom. He clearly understood that filmmaking is a very different mode of expression. Novels don’t have many limitations in the way that films do. You can take a much wider angle — a god-like view, looking across space or vast periods of time. However, for a film, you only have 90 minutes to two hours to tell a story. If we tried to tell an entire Liu Cixin story in two hours, it would become like an educational documentary about the future development of humanity. Because of these time limitations, a film has to zoom in on characters and feelings. The core of The Wandering Earth is about the relationship between father and son — and this story works in any genre. It’s like putting on different clothes. The trappings of a romantic film, an action film, or a sci-fi — it’s just different clothes over the same storytelling core.

In any case Da Liu (“Big Liu” — Liu Cixin’s nickname in Chinese), wasn’t involved too much. But he gave us a very high appraisal of the film after he saw it, and this meant a lot to me.

What was it like for you working with Wu Jing?

Wu Jing’s role is different in this film from his past work. He plays a father, and he conveys the relationship between father and son in a very traditional Chinese way. It’s different from the very direct way fathers show affection towards their sons in American culture these days. The expression of fatherly love is done rather silently China, or through actions but very few words. Wu Jing’s persona actually fit into this role very well.

Beyond just his great performance, he brought tremendous support to the film on every level. Creatively, he gave me great advice from early script discussions to the very end of production. He also chose to join the project — which may have looked risky at that time — at the very moment when his own film was setting records as the highest-grossing Chinese film ever (Wolf Warrior 2, which earned $850 million in 2017). I think that shows a lot of courage. When we had some difficulties, he stood up for the project every time. He ensured that this film got made.

Shortly before The Wandering Earth was released, China’s real-life space program achieved a major milestone, landing a module on the dark side of the moon. Do you think enthusiasm for China’s space program helped your film in any way?

Yes, I think it did. This relates to what I said earlier about science fiction films only really working once the country producing them is powerful enough for the audience to accept the story.

Just days after the Lunar New Year holiday began, pirate copies of The Wandering Earth and the other top holiday releases leaked online in China. The high quality of the copies and the volume at which they were downloaded was unprecedented — some analysts have estimated that piracy cost producers and exhibitors hundreds of millions of dollars in potential revenue. What’s your take?

The piracy during Chinese New Year was very serious. We are working with the National Copyright Office and Central Propaganda Department to deal with the problem. We have already traced thousands of links and discovered some of the original sources from their electronic watermarks. Meanwhile, our security organs have started investigations and said they will deal with it seriously. I hope more and more people will have stronger copyright awareness. This is the only way we can continue to promote the development of the Chinese film industry.

Now that The Wandering Earth is a historic success, how are you feeling about the whole experience?

My goal for The Wandering Earth was very simple: not to lose money. As long as we didn’t lose money with this project, then more investors would believe in the genre, and more directors would have opportunities to try exciting new things in our industry. So I hope we have contributed to a healthy industry cycle.

And besides fulfilling my personal dream to make a sci-fi film, the experience has been important to me in another way. I’m happy that kids here can watch a big science fiction film based in their own culture for the first time. We can give those kids the sci-fi bug, and enlarge their imagination and reverence for science. A James Cameron movie planted that seed in me, but now more children in China can have that experience. 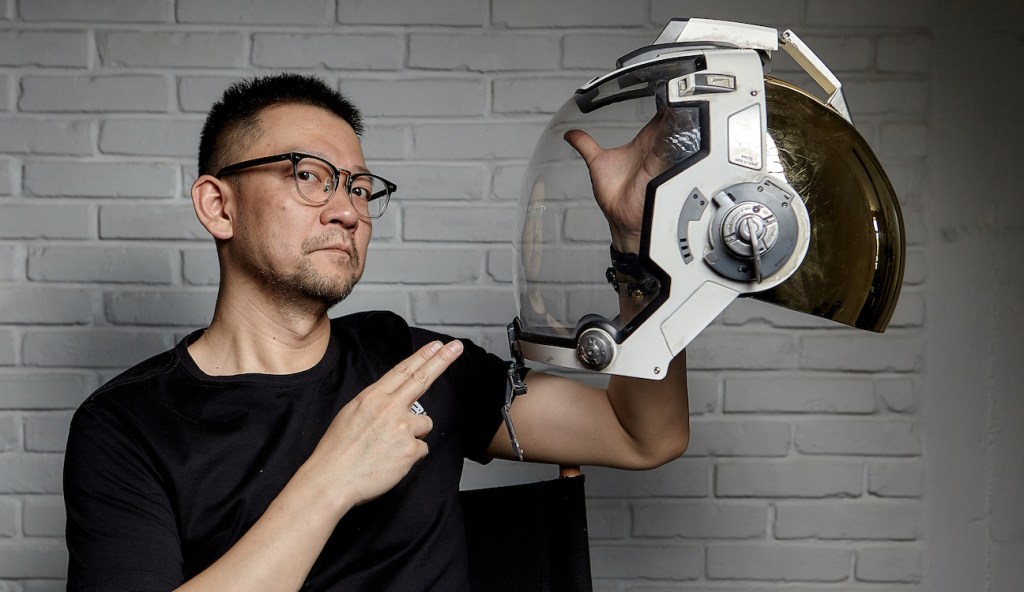 A version of this story appears in the Feb. 20 issue of The Hollywood Reporter magazine. To receive the magazine, click here to subscribe.