On Jan. 15, Marvel Studios boss Kevin Feige expanded the Marvel Cinematic Universe into streaming with WandaVision, a nine-part TV series that marks the studio’s first original for its parent company’s prioritized Disney+ service. With five more shows and four movies slated for release in 2021, the goal is for Marvel to always have something new for MCU fans, enticing audiences to join Disney+’s 86 million global subscribers and keep them paying monthly.

Feige tells The Hollywood Reporter that every project he’s developing fits in one of two categories: Marvel theatrical films and then “everything else,” which encompasses live-action and animated series as well as one-offs that include an upcoming Guardians of the Galaxy holiday special. Disney+ shows are key to setting up characters and plotlines, he says: “It really does come down to the story and to having the opportunity with a She-Hulk, with a Ms. Marvel in particular, to spend more time introducing a character before we see them in a feature.”

Marvel may be a pacesetter as studios increasingly keep in mind streaming offshoots, expansions or companion series to big budget theatrical films during the greenlight process to cater to large fandoms that might drive streaming subscriptions. Each time the studio sends a streaming series to Disney+, its parent is forgoing box office revenue to feed its streaming service. But Feige sees potential in using the service to build his movies, and vice versa, as characters will weave in and out of both. For example, the studio initially made a deal with Jeremy Renner to play his Avengers character Hawkeye in a solo movie before pivoting the project to a Disney+ series that is due this year.

WarnerMedia, aiming to boost its HBO Max service, has made big splashes in this vein, backing Zack Snyder’s $70 million-plus cut of Justice League, arguably the result of fans’ persistent calls to revamp the critically panned 2017 film. The studio also is teasing the concept of a multiverse (think: alternate timelines existing in the same plotline) to create narrative cohesion for dozens of DC projects. To that end, after 30 years, Michael Keaton will be back as Batman in Warner Bros.’ The Flash movie, due out in 2022. DC also is delving into big-budget HBO Max series, such as James Gunn’s Suicide Squad spinoff Peacemaker, which began filming Jan. 15 in Toronto, as well as a spinoff of Robert Pattinson’s The Batman theatrical feature.

This approach does have the risk of supply outweighing demand. That’s a lesson learned the hard way by the comic book industry, which went from boom to bust in the 1990s as big publishers planned seemingly endless launches and spinoffs of popular properties, but not one entirely unknown to studios; Paramount took Star Trek from a successful franchise in movies and TV in the late ’80s and early ’90s to one considered creatively exhausted, thanks to over-exposure and increasingly generic storytelling, by all but the most devoted fans. “Narrative logic matters to people. They want to be surprised, and they want it to make sense,” says Michael Niederman, a TV professor at Columbia College Chicago who studies fan culture.

The blueprint for interlocking streaming series may be foreshadowed by an experiment on linear TV. Since 2014, The CW has run annual crossovers among its DC superhero properties, culminating in 2019’s Crisis on Infinite Earths — an adaptation of a DC Comics storyline bringing together shows such as Supergirl, Batwoman, The Flash, Arrow and Legends of Tomorrow that also featured cameos from other DC series and movies, including Ezra Miller’s big-screen Flash. “We started with the litmus of, ‘Do we think this is cool?’ But inevitably phrases like, ‘The fans are gonna love this’ and ‘People are going to go crazy’ would seep into our discussions,” says writer and producer Marc Guggenheim. “I think the Venn diagram between what we wanted and what the fans wanted is practically a circle.” 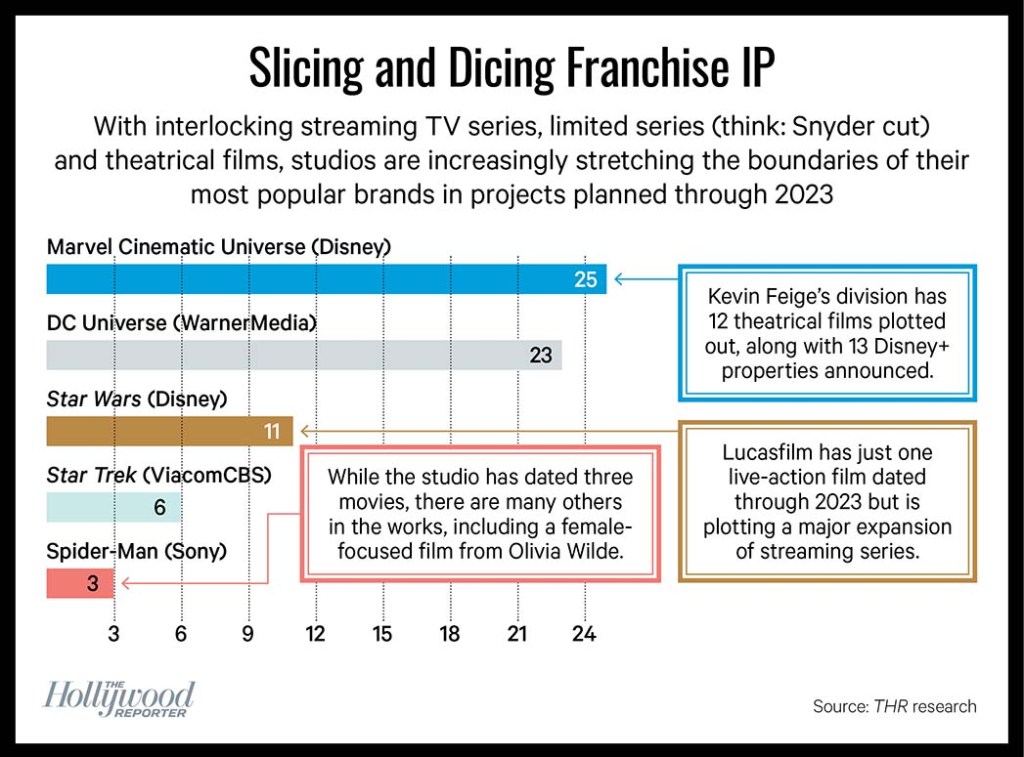 It’s a tactic that Sony Pictures is drawing from as it extends its stable of Marvel movies with Jared Leto’s Morbius. The feature, dated for Jan. 21, 2022, will be the first of the films to directly reference Spider-Man and features Keaton, reprising his role as Vulture from 2017’s Spider-Man: Homecoming, suggesting for the first time that Sony and Marvel’s Tom Holland movies can connect to the universe of films Sony is building. It seems there is indeed a grand plan for the Sony Pictures Universe of Marvel Characters, the name the studio has given its budding universe.

Sony has been attentive to fan reactions for its Marvel spinoffs. After a muted reaction to the first trailer of 2018’s Venom, the studio’s marketing group, which monitors fan chatter on social media and makes recommendations from script development through the marketing phase, suggested fan-desired beats for the next trailer: edgy humor and Venom biting someone’s head off. The film went on to overperform with $856 million globally.

And Marvel Studios’ multiverse is growing as Jamie Foxx, who played Spidey villain Electro in 2014’s The Amazing Spider-Man 2, is returning for the next Holland feature, as is Alfred Molina, who starred as the villain Doctor Octopus in Sam Raimi’s Spider-Man 2 in 2004.

Meanwhile, for Universal’s Jurassic World: Dominion, the sequel to its $1.3 billion grossing 2018 film Fallen Kingdom, the studio returned to its roots by casting Sam Neill, Laura Dern and Jeff Goldblum, all original stars of the Jurassic franchise.

While fans applauded, director Colin Trevorrow notes that it’s not enough to put these characters onscreen together. “There’s the surface reason why we’re all excited, but the minute that we get over that, we’re going to ask the deeper question, which is why?” says Trevorrow, who has season two of Netflix’s Jurassic World Camp Cretaceous out Jan. 22. “What is it that they are going to do to make it absolutely vital that they be a part of this movie?”

To that point, Stan Lee protégé Roy Thomas has often told a story relaying a perhaps apocryphal quote from the Marvel Comics mastermind: no matter what they say, audiences don’t actually want change. Instead, Lee explained, they want “the illusion of change.” Studios will be toeing that line ever more carefully this year. Says Guggenheim: “I’m always writing with the fans in mind, of course, but they’re not dictating the creative direction of what I’m doing.”

How 'WandaVision' Director Matt Shakman Went From Westeros to Westview