[Warning: This story contains minor spoilers for What Happened to Monday]

Noomi Rapace is known for going to extremes for her work. She’s been so entrenched in a role that she experienced physical pain that only left when production ended. She vomited after completing the Girl with the Dragon Tattoo trilogy — her body’s way of expelling her character Lisbeth Salander from her soul.

So it certainly means something when Rapace says Netflix’s What Happened to Monday wasn’t easy.

“This is definitely the hardest thing I’ve ever done,” the actress tells Heat Vision of the film, in which she plays seven identical sisters living in a dystopian future. It’s a world where a government program ruthlessly enforces a one-child policy in response to a growing population and environmental crisis. Siblings are taken from their families, but after the sisters’ mother dies in childbirth, their grandfather (Willem Dafoe) keeps them hidden, naming each for a different day of the week. On the day of the week they are named for, each sister is allowed to go outside under an assumed identity they all share.

“It was different versions of me, just more extreme. It was very intense,” says Rapace, who drew upon different phases of her own life for the characters (such as being a rebellious 15-year-old, a martial arts enthusiast at 16 and a shy young adult). “I never worked so hard. My routine was very strict. I was up at four in the morning. I worked out. I went to the studio. Shot all day, went back to the hotel, went to the gym and fell asleep. I didn’t have a life. It was five months of my life when seven sisters were living with me and took over everything. I didn’t exist.”

When Hansel & Gretel: Witch Hunters director Tommy Wirkola boarded the project, the script was written for brothers, but he immediately thought of Rapace. Thus began a 10-month rewrite process to change the film to focus on seven women rather than seven men.

“It was physically and emotionally draining for her at times,” Wirkola says, calling out a scene in which one of Rapace’s characters dies. “Not only does she have to play a death scene, but she also has to react four different ways.”

Rapace would wear a different perfume for each character, and play different music. And most importantly, would need to spend time alone to get into the headspace for each of the women.

“I was dying in the morning. I was reacting to my own death during the day. [I needed] five different ways of crying and being shocked and being upset,” she says of the particularly demanding death scene.

To help with the shoot, the production employed body doubles, whom Rapace helped direct, as they needed to know how the star would play the scene for each character so that it would sync up when she performed the part herself. 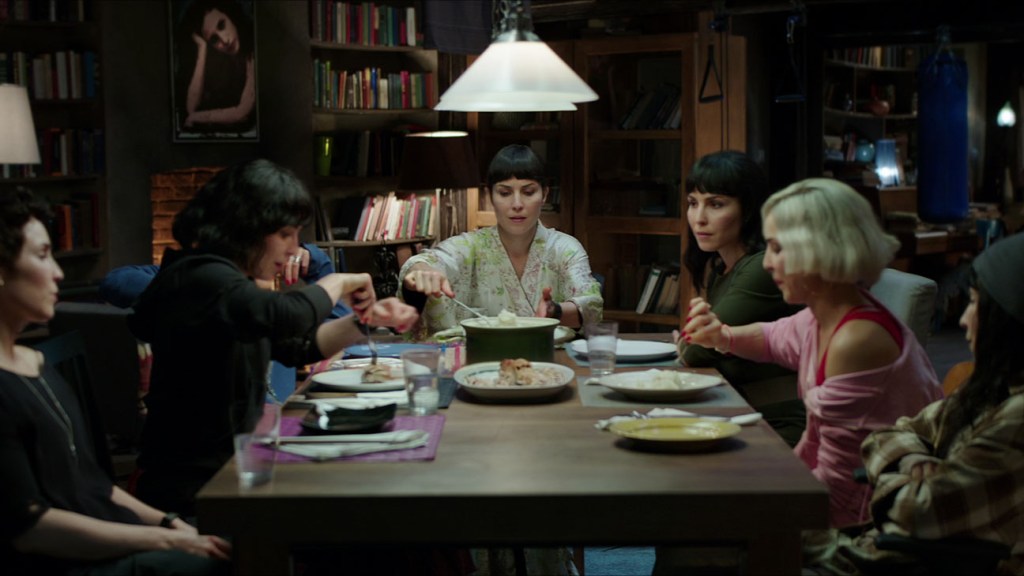 In the film’s trickiest set pieces, a group of the sisters fight a bunch of men.

It wasn’t just action scenes that were challenging to shoot. Even scenes that would be simple in other movies — such as the sisters having dinner together — required a lot of work and clever filming techniques to make it convincing for one actress to play them all. But Wirkola didn’t want to draw attention to the fact that the same actress was playing seven different roles, so he tried to make the film look like any other.

“It’s very tempting to show off the techniques. But the goal is of course to make the audience forget about it as quickly as possible. We did very little of the fancy camera stuff with cameras moving around the sisters. We treated it like any other scene,” he says.

Rapace was so worn down after completing her months of shooting, that when she returned home to London, she found herself lost in once-familiar neighborhoods.

“My short-term memory was gone. It was almost like I used all I had, so when I came back home, I had nothing left. It took like three weeks to recover and slowly come back to life. I didn’t see anyone, I didn’t speak to anyone,” she says.

She had to say goodbye to the seven sisters, and perhaps, even mourn them.

“They were my family for five months,” she says. “It took me awhile to recover and figure out who I was after this whole family had been living with me.”