The future has changed. Not only is this change true of the in-narrative post-apocalyptic wasteland that sees mankind making its final stand against machines, but it’s also true of the Terminator franchise, which seemed stuck in a perpetual state of mediocrity following the greatness of James Cameron’s T2: Judgment Day (1991). For the first time in almost 30 years, we have a Terminator sequel that actually feels akin to Cameron’s first two films, The Terminator (1984) and T2. For the first time in almost 30 years, the future of the franchise looks bright thanks to Tim Miller’s Terminator: Dark Fate. At least, it looks bright in terms of story and narrative possibilities for the future. The box office tells another story, with the pic is stalling in its domestic debut, where it is expected to bow to around $27 million.

Audiences may be skeptical of a new installment after being burned by Terminator 3: Rise of the Machines (2003), Terminator Salvation (2009) and Terminator Genisys (2015). But should they take one more chance, they’ll find themselves experiencing a story that’s worth investing in and seeing continue. Much like Star Wars: The Force Awakens (2015), Creed (2015) and Halloween (2018), Dark Fate is a legacy sequel that feels like a recalibration of the franchise, a reconsideration of what Terminator is as a property in a way that recognizes the best parts of the past while forging ahead. Ignoring the previous entries post-T2, Dark Fate presents itself as the true Terminator 3 and opens with a major plot point that shifts the story in a new direction.

Given Dark Fate‘s box office struggles, another film sequel is likely in doubt. While the theatrical window for this Terminator series may be over, perhaps the franchise can find favor with audiences and continue on through a streaming series. Distributor Netflix already has a deal with Paramount, and seeing the continuing adventures of Dani Ramos (Natalia Reyes) and Sarah Connor ((Linda Hamilton) play out in that format may be worth exploring. Let’s look at where Dark Fate goes, and where such a series could go next if granted life.

Shortly after the events of T2 and the prevention of Judgment Day, John Connor (Edward Furlong) is killed by a Terminator (Arnold Schwarzenegger), a backup activated in result of the T-1000’s failure. As Sarah Connor puts it, he was killed by a future that no longer exists. But Judgment Day still happens, just later down the line with the AI system Legion replacing Skynet, and the future of the Resistance no longer dependent on the messianic John Connor, but Dani Ramos. On the run from a new breed of Terminator, Rev-9 (Gabriel Luna), Dani finds herself under the protection of an augmented human soldier from the future, Grace (Mackenzie Davis), and a battle-hardened present-day Sarah Connor, who sees her younger self in Dani. 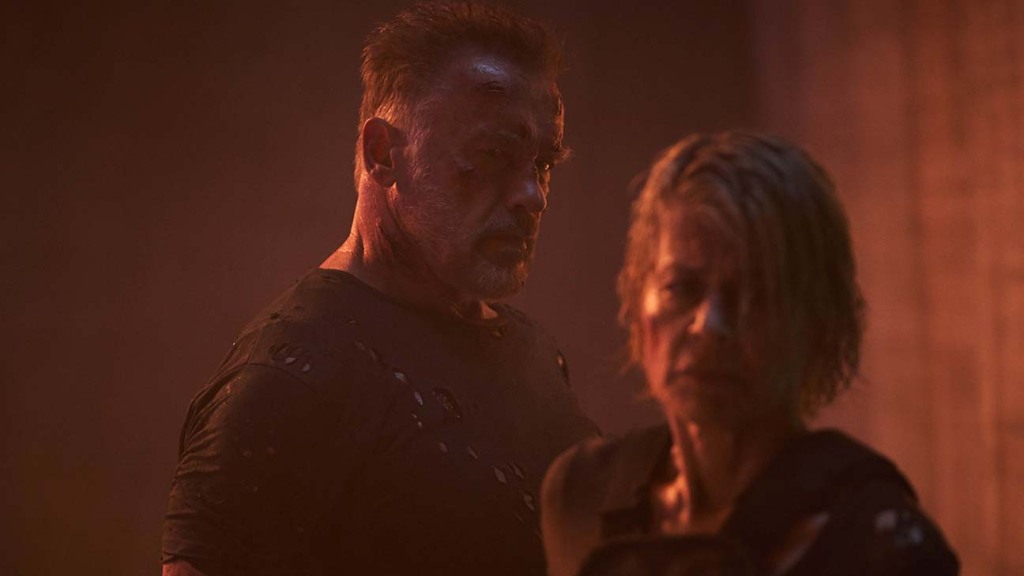 The ending of the film takes three major players off the board: Rev-9, Grace and Carl (Schwarzenegger), the Terminator who killed John and without a mission grew a conscience in the intervening years. Mirroring the ending of the first film, Dani climbs into a jeep and sets her sights on preventing the dark fate ahead for humanity. But unlike Sarah was at the end of the first film, she’s not alone. “You’ve got to be ready,” Sarah tells her. “I know,” responds Dani, echoing Sarah’s final words at the end of that 1984 film. While Dark Fate smartly avoids a post-credit scene, permitting the pic to serve as a conclusion to the series, story writer and producer James Cameron has said that the installment works as both a conclusion of a trilogy started in 1986 and the beginning of a new series, with two more entries should audiences oblige. Dani’s training under Sarah will obviously be a central element going forward, but there are other threads introduced in the film that are worth considering.

First, there’s the question of Legion. How did the defense system come about, presuming that Cyberdyne Systems isn’t responsible? Cameron likes to employ biblical references in his Terminator films and Legion evokes the New Testament story in which Jesus exorcises a man of a multitude of demons who collectively go by “Legion.” The name of this new cataclysmic AI system my suggest that the threat to humanity isn’t coming from just one self-aware defense system, like Skynet, but a multitude of systems working in unison… or perhaps not. Cameron recently said in an interview, “I feel like one of my major motivations on this film or coming back to the, hopefully franchise, was to explore the human relationship with artificial intelligence. I don’t feel we did that in Dark Fate. I feel that we set the stage or we set the table for that exploration, and that exploration would take place in a second film and a third film. And we know exactly where we’re going to take that idea.” 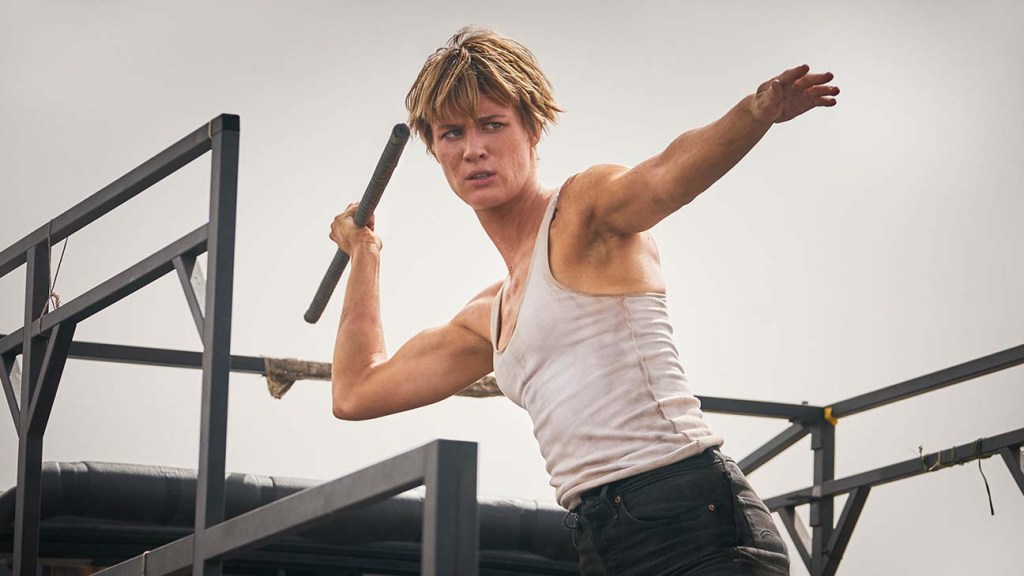 We’ve already seen humans working with benevolent Terminators, but are there benevolent AI Systems within a larger system that have different plans for humanity? Perhaps Judgment Day needs to happen so that mankind can ultimately be saved? In what would be an interesting twist on the series, and fit with Cameron’s ecological concerns, Judgment Day could be a necessary event that is ultimately the only way to ensure the future of the human race. Dani and Sarah having to contend with the deaths of billions in order to ultimately ensure their survival as a species and heal the world’s ecosystem could make for a fascinating turn of events.

Cameron also went on to talk about the theme of reincarnation at the center of the story, and how character types and conflicts repeat themselves until they reach their logical conclusion. We know that Dani is humanity’s new hope, but is she only one of many possible John Connor figures? During the film, Carl reveals that he has spent that past 30 years sending Sarah Connor to coordinates where new Terminators would arrive from the future so that she could kill them and give her life purpose. But why were these Terminators sent? Are they all simply remnants of the future that no longer exists, or were they sent by Legion to target other important future figures? Dark Fate doesn’t focus much on timelines, which helps give the pic a sense of urgency and narrative clarity, but there are questions that remain.

The nature of time travel in the Terminator films is iffy, as are the rules of time-travel media in general. But if John no longer lives to become the leader of the resistance, does that mean that Kyle Reese is never sent back and John was never born? Sarah reveals that she doesn’t have any pictures of John and is starting to forget his face. It’s a heartbreaking moment, but perhaps it’s also hinting at a larger narrative point in that John never existed at all and only lives on through Sarah’s memory and the existence of Dani, a thematic point that connects with James Cameron’s exploration of cultural memory and reincarnation in Avatar (2009). And what about the T-800? The future shows that those Terminator models still exist as infantry, but have been surpassed by the Rev-9 and another Terminator model that has tentacled appendages. Has Schwarzenegger’s presence in the franchise ended? Surely there’s no need to send a T-800 back to kill Dani when Legion has clearly improved on that model. With John Connor and the T-800 seemingly out of the picture, the franchise could benefit from new characters. Cameron, though, has signaled that there’s always a way to bring Schwarzenegger back.

One way in which Schwarzenegger could return is something that has been considered within the franchise for years. Who is the human base of the T-800? Was the T-800’s appearance as an Austrian body builder simply a case of coding, 1s and 0s resulting in the most efficient model? Or was there a human inspiration? Schwarzenegger playing a human character could provide the actor with the opportunity to do something different within the franchise and add another relationship for Dani and Sarah to explore. And then there’s Grace, who sacrifices herself to save Dani, although her younger self still exists in the present as a child. Much like Schwarzenegger in the first film, Mackenzie Davis is too welcome of a presence to imagine that she won’t fit into the sequel in some capacity. Whether the filmmakers twist the T2 formula and reintroduce her as a villain, a Terminator modeled after Grace, Davis’ importance in this new iteration of Terminator is just as important as Hamilton’s and Reyes’.

It’s been so long since we’ve had a Terminator film that felt worth continuing and there are a myriad of possibilities to go into, while avoiding the missteps of the three previous movies. The fact that Cameron knows where he wants to take the story inspires confidence as well, and if we do end up looking at this as a first installment, then we all know that Cameron only gets better when it comes to sequels. But as intriguing as questions of AI relations, timelines and Terminator models are, the most important thing for the franchise at this point, and the central reason why Dark Fate succeeds, is introducing characters we care about. However the unknown future rolls towards us in regards to the Terminator franchise, it’s the characters that give all the science-fiction spectacle and action sequences weight and meaning. And if the Terminator franchise can relearn the value of human life, maybe we can, too.