[This story contains spoilers for Venom]

Venom has devoured the record for top October box-office opening of all time. Though critics dismissed it, audiences are giving it higher marks. Despite the success, it’s hard not to wonder about the movie that could have been had the filmmakers gone a different route.

“The world has enough superheroes,” proclaim the Venom posters and the Venom trailers. Given the film industry’s saturation of costumed do-gooders, it makes sense to emphasize what’s different about director Ruben Fleischer’s parasitic protagonist, a shape-shifting teeth, tongue and tentacle monster that eats people. The character bears all the hallmarks of his creation during a dark and edgy period of comic book history, so it’s easy to see where the expectation of an R rating came from. Fox has more than proved the viability of the format with their own R-rated comic book features, Deadpool and Logan, so why not Sony, too?

But Venom arrived in theaters with a PG-13 rating, amid claims that there was never anything more extreme in the works in the first place. For as much as it seems like Sony blinked at the last minute, the PG-13 approach fits right into the movie’s larger philosophy: that, despite what the taglines say, Venom is something of a superhero after all.

This conflict of character is the most baffling part of Venom. Having latched onto ex-investigative journalist Eddie Brock, the alien symbiote hopes to blanket the Earth with the rest of his kind. This process involves traveling to outer space to fetch his friends, and the results will, naturally, end poorly for every lifeform currently on Earth. At the last minute, however, Venom changes his mind. Since, like Eddie, he’s “kind of a loser” back home, he says that they’re better off alone on the Earth, with no competition. Cue the confrontation between Venom and another symbiote, Riot, that’s using the nefarious CEO Carlton Drake (Riz Ahmed) to enact the same plan. Venom risks his life to save the Earth and, eventually, Eddie.

Which isn’t to say everyone’s favorite drooling parasite has never (relatively) behaved himself. There’s precedent in the comics for Venom as both vigilante and antihero —an early ’90s miniseries is called Venom: Lethal Protector. But the thing Venom gets wrong is what the “enough superheroes” marketing campaign zeroes in on: that Venom exists in opposition to other heroes. In the comics, he was more than just a Spider-Man villain; he was the anti-Spider-Man, an evil version viewed through a gritty ’90s funhouse mirror. And in that villainy, there’s an equal thrill in seeing the bad guy do a moral about-face, regardless of how long it actually sticks. The fun comes from subverting a character’s traditional role as the opposition, often by forcing them to work together with whoever they previously menaced. It’s built on history and context, shifting previously understood character dynamics and development into something new.

Though Sony’s solo film eschews the white spider logo typically branded on Venom’s chest, he still bears a striking, unexplained resemblance to Spider-Man. This inconsistency is emblematic of the film’s problem with how it portrays Venom: there’s no context for his semi-heroic heel-turn. Venom never gets established as much of an antagonistic force because, barring a S.W.A.T. team that he lets off unscathed (at Eddie’s insistence), he mostly fights Carlton Drake’s goons in self-defense. He eats some of their heads, but the cutaways are so quick and the act itself is shot at such a distance while shrouded in darkness or fog that the characters must pause to reiterate to the audience that Venom did, in fact, do the thing. 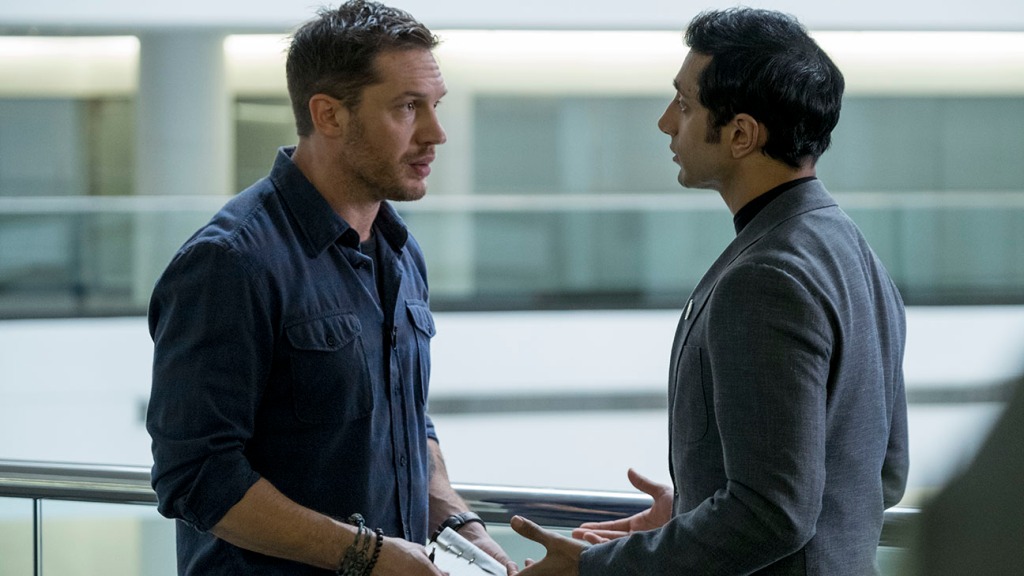 Near the end of the movie, Eddie lays out the ground rules of his relationship with Venom, and top of the list is that they can’t go around eating just anyone. Only bad guys get the business, as if that hasn’t already been the case for the entire film. To this end, they thwart a robbery (the “turd in the wind” scene you might recognize from the trailers) and, after appearing to let the criminal off with a particularly intense scolding, they eat him. Heroic? Not really. It does, however, set the character up for vigilantism rather than villainy, which has no actual resonance because it lacks any villainous history to build on. One of the unruliest things Eddie and Venom do in the whole movie is hop in a crowded restaurant’s lobster tank, grab the juiciest one, and take a bite (which is admittedly hilarious, but still).

The low-budget sci-fi movie Upgrade from earlier this year has drawn frequent comparisons to Venom, both for star Logan Marshall-Green’s physical resemblance to Tom Hardy as well as the similarity of its plot, where protagonist Grey Trace comes to terms with an artificial intelligence that lets him control his paralyzed body. Grey can give the A.I., STEM, permission to take over his body entirely in much the same way Venom can take over Eddie’s. Both STEM and Venom also banter with their hosts in ways no one else can hear. Most of all, though, Upgrade takes Grey and STEM through a character arc that’s essentially Venom done in reverse and done better. STEM begins as a benevolent helper, pointing out details that Grey missed in his quest to avenge the death of his wife, but it graduates to something else entirely.

The components missing from Venom are all present in Upgrade. Writer/director Leigh Whannell dedicates multiple scenes to STEM helping Grey, making time to establish their relationship as well as the more heroic mode that STEM will eventually subvert, as opposed to the waffling antihero that Venom never really diverges from in the first place. Upgrade is also quite violent, and that violence horrifies Grey. After first ceding control of his body to STEM, he pleads for a bad guy to stay down as he watches him repeatedly be taken down by the A.I. The confrontation ends in death, as STEM takes a knife through his opponent’s open mouth. The scene is played at least partially for laughs — the visual of Grey helplessly screeching “oh, god” as his hands smash a plate over the guy’s head is certainly funny — but such stark violence crucially establishes STEM’s capacity for harm, something Venom rarely does more than allude to. The parasite’s head-eating never lands with anything close to the same impact, and the characters treat it more like a particularly weird quirk.

To an outside observer, Venom’s setup lends itself well to a grisly horror comedy (in one scene, a symbiote bonds with an unsuitable human host, who promptly swells like he’s about to explode). But Venom ends up instead more like an action movie that feels, yes, toothless in its PG-13 treatment, which comes down to more than just the amount of gore on display — the movie establishes Venom as a much friendlier character in hopes of courting mass appeal. In his place, it works to establish billionaire Carlton Drake as the film’s unmistakable villain, who conducts experiments on poor people. He outright says “fake news” and, with his space exploration program and misguided ideas for saving the planet, seems clearly based on Elon Musk. Venom pushes a half-hearted “eat the rich” theme, only the movie itself is too squeamish to show anyone get eaten.