The video game industry relinquished its hold over downtown Los Angeles on Friday as the E3 convention drew to a close. Gaming giants such as Nintendo, Xbox, Square Enix, Epic Games, Capcom and Bethesda dominated the show floor, showcasing their latest upcoming titles to eager fans and jaded, sore-footed journalists.

Amid the rabble, The Hollywood Reporter’s Patrick Shanley, Pete Keeley and Trilby Beresford braved the crowds to get hands-on time with this year’s biggest titles (and a few indie sleepers), fearlessly sprinting from booth to booth in an attempt to cram as many game appointments into their crowded schedules as possible.

Patrick Shanley: Another E3 has come and gone, and while my feet may be happy that the convention hall has closed its door I still find myself filled with melancholy. There were a lot of great games this year but my favorites are a mixed bag of what I expected to blow me away and complete surprises. Obviously, I’m going to start with Final Fantasy VII’s remake, which I’ve been waiting on for nearly half a decade now. The combat system, the visuals, the music, everything in the brief demo that Square brought to the floor completely knocked my socks off. I’ve beaten the original over 20 times and this PlayStation 4 version is the best kind of remake there is: completely new yet just familiar enough. The demo focused on the first boss fight in the Sector 1 reactor and, while familiar in many ways to longtime fans, this battle turned the cinematics and action past 11.

Pete Keeley: TWO Blu-rays for just Midgar! I didn’t get to do the demo because I concentrated on playing as many indie games as I could, but I came into E3 with my most fervent hope being FFVII Remake news and, yeah, I’ve only beaten the original three times but I, too, am satisfied.

Trilby Beresford: My first time at E3 defied every expectation. First of all, I really wasn’t expecting to feel endeared in any way toward Wolfenstein: Youngblood (the inclusion of “blood” in the title was a turnoff), but the gorgeous cut scene at the top of the game was breathtaking. I was engaged throughout the hourlong demo where I worked in tandem with my co-op partner, a friendly stranger beside me. As amazing as that was, the guided demo of Annapurna’s Telling Lies — a story-driven, investigative thriller mobile game —  is definitely where I got the most excited, and talking to creator Sam Barlow sealed the deal for me.

Keeley: Another game I didn’t play — Wolfenstein I mean. I did make a good GIF from the trailer though.

Shanley: Bethesda had some fun games this year. I enjoyed my time with Youngblood and the co-op gameplay between the Blazkowicz sisters is really, really satisfying. I thought Doom: Eternal was the stronger game, however. Even in the short demo, that game is non-stop action and has maybe the deepest set of controls I’ve ever seen in a first-person shooter. I heard more gamers saying “Holy shit!” during that playthrough than any of my other appointments.

Beresford: I played a few minutes of Doom: Eternal and literally got stuck in the first room. I don’t think I understood the “jump” command.

Keeley: The most fun I saw anybody having was with the game Conan Chop Chop, a roguelike brawler that Funcom revealed as an “April Fools’ joke” this year — but it’s very real. I was at Funcom to demo Moons of Madness because I’m a sucker for any game that namechecks Lovecraft in the press materials, and there were so many squeals of delight coming from the people playing Chop Chop that I came back later to try it. Absolutely a top-notch party game.

Beresford: I wasn’t sure what to expect with Annapurna’s Sayonara Wild Hearts on Nintendo Switch, and even though the game is clearly intended for younger players, I marveled at the graphic-novel-like world, the generous bursts of color, fantastic pop soundtrack, and the simplicity of the overall game. Playing it was a very relaxing experience. My stress levels remained on an even keel long after I gave up the controller for the next player.

Shanley: I really want to highlight just how good the gameplay in Respawn Entertainment’s Star Wars Jedi: Fallen Order is. Honestly, it completely took me by surprise after what I thought was a rather lackluster gameplay debut at last weekend’s EA Play event. Once I actually got my hands on it, though — hot damn! It’s Star Wars meets Dark Souls in the best possible way. Cal, the game’s main, feels powerful, adaptable and, frankly, like a Jedi, while enemy types range from one-hit scrubs to powerhouses with devastating combo attacks that require precise parries and button presses to take down. I pulled a complete 180 on this game after playing it and I apologize for any lack of enthusiasm I may have exhibited before getting my hands on the controls.

Keeley: Speaking of control, one of the only “big title” demos I scheduled was Control, from Max Payne studio Remedy. I sat in for the non-playable demo last year and I just loved it so much (I’m not sure if Remedy or publisher 505 threw “Lovecraft” around in some PR emails but it wouldn’t be out of place). It’s not really my “type” of game, but in what’s kind of a saturated category of horror-y, sci-fi-y third-person shooters, this game is memorable and unique. Everything about it, from the weapons to the abilities to the brutalist environment, feels new. I’ve been thinking about it for a year. At the end of the demo when the guy from Remedy was asking people to put their controllers down and watch a cutscene, everyone pretended to ignore him so they could keep playing. I was trying to clear a ventilation system of weird growths that vomit on you if you get too close and was very keen on finishing. Alas.

Shanley: On the cutesier front, Nintendo’s Luigi’s Mansion 3 and The Legend of Zelda: Link’s Awakening are both phenomenal. I honestly didn’t want to leave my appointment and the timed demos flew by. Having never played any Luigi’s Mansion games before or the original Link’s Awakening, I went into these with fresh eyes, but it’s hard to imagine any more charm being pumped into either of these titles. Luigi is a beautiful game with surprisingly tight controls and a very solid multiplayer offering, while Link’s Awakening’s tilt-shifted, dollhouse art style is the perfect mashup between classic Rudolph the Red-Nosed Reindeer aesthetics and iconic Zelda gameplay. I’m going to play this one until smoke comes out of my Joy Cons.

Beresford: Gah! Next year I really want to play some Zelda and Mario games.

Keeley: I recently started playing the Gameboy Color version of Link’s Awakening in anticipation of the remake, since I also missed the game as a kid. At this point, it’s just weird if you don’t already have or badly want a Switch — what more can Nintendo do? (Hey Nintendo please make a new Mario Golf game!). But cutesy was the segue I was looking for because with you two handling all the AAA stuff I spent my time playing as many games as I could from small studios and indie devs — and there is so much good stuff out there. And cute? Boy howdy! I loved this game Boyfriend Dungeon, which is a hybrid dungeon crawler/dating sim, where your weapons transform into people and you have to romance them to power them up. The game looks amazing, the music was some of the best of any game I played, indie or no — it’s just a really well-done dungeon crawler with a bunch of other cool stuff going on. It was this year’s Concrete Genie for me, just an absolute, out-of-nowhere delight. I also really loved this insane 2-D auto-runner Earth Night, which, just walking by the demo you had to stop because it’s so colorful and beautiful and there’s a million things going on onscreen. And it’s so smooth! No lag ever, which is an achievement in itself. I don’t want to further cannibalize my E3 indie round-up but if you were at E3 and didn’t stop by the IndieCade booth you missed out.

Beresford: Pete, I’m already a fan… of you. I think you need your own podcast.

Keeley: Well I certainly look like a guy who’d have one.

Shanley: Last thing on the cute beat, but Pete, you took a pretty incredible picture with a dragon from the new Monster Hunter World expansion, Iceborne. I am using that as my segue to say that game is one of the more overlooked highlights from this year’s E3, probably because it’s DLC and not an entirely new title, but it sure felt big when I played it. There are new gameplay elements (the Clutch Claw is a grappling hook that makes hacking and slashing at gigantic beasts even more satisfying somehow) and I was told that this expansion is so big that it basically could be considered a new game. 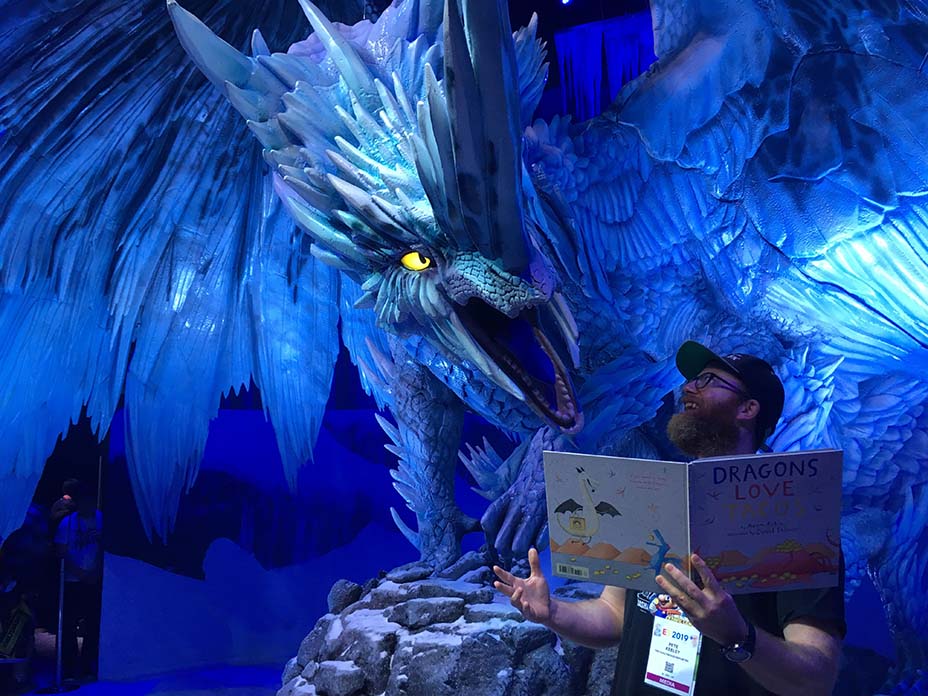 Keeley: Shout out to Capcom for always having the best photo ops. Worth the half-hour wait.

Shanley: This will sound odd considering how much I’ve complained about throbbing feet, but this year’s convention actually felt a good deal smaller than past iterations. The hallways and lobbies outside of the South and West halls of the L.A. Convention Center were much less crowded with booths and exhibitions, while the absence of Sony on the show floor was felt more than I anticipated. Don’t get me wrong, the whole thing was still a spectacle (and I am convinced there were more fans at this year’s E3 than any other year since they began admitting general audiences in 2017), but it just felt a bit more hollow than in years past. I think 2019 is a bit of a transition year in gaming and expect 2020 will be the full-blown extravaganza that many hoped this year would be. 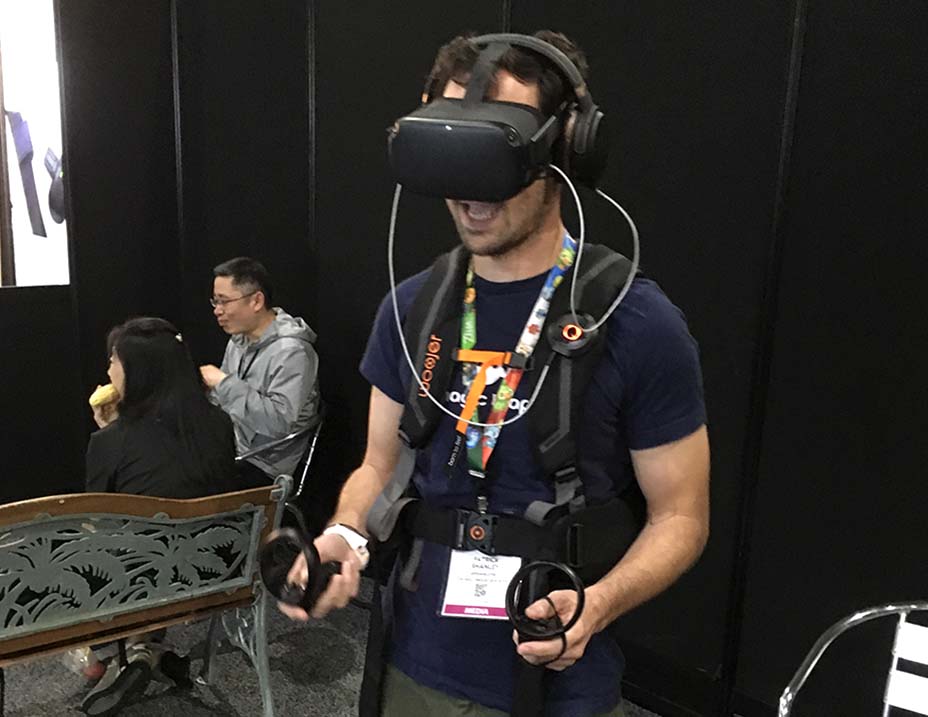 Keeley: Well it definitely felt smaller for me but that was because I was much more careful about scheduling my appointments. Last year I was running through the concourse back and forth between South and West. This year I was smart. I think Sony’s absence was definitely felt, if only for the lack of VR titles. Last year Sony had a really nice setup on the floor for PS VR, and their media booth featured several more games. This year the only time I strapped on a headset was at the Woojer booth, demoing their haptic feedback vests with Beat Saber and Thumper. It’s pretty crazy how much those vests deepen the connection to the game. I still think at some point “VR rooms” will be as common in high-end homes as gyms. Everyone will have their headset, their rumble vest, their body suit that gets hot and cold, and the Virtuix Omni — just really scare the shit out of yourself playing Resident Evil‘s eventual 4K remake. Can’t wait.

Shanley: I’ll buy in when they release FFVII in VR.

Keeley: Wow. Impressive that you’ll still be gaming in the year 2060. Anything else to add? Did you get any free T-shirts that actually fit? I was 0 for 4. Maybe next year.

Shanley: I got a sweet Cyberpunk 2077 jacket that I will be wearing to all work functions in the future.

Beresford: How did I miss that?