Just before Memorial Day weekend, writers and crew from The Simpsons commenced their ninth annual fantasy summer box-office league. Tummies full of communal barbeque and minds ready for battle, they began their bidding in the show’s bungalow on the Fox lot. Everyone was optimistic about the slate of films, considering many in Hollywood and on Wall Street were predicting a record summer.

Three months later, they’re feeling — to borrow a phrase from Bart — “craptacular” after the worst season in memory at the domestic box office. Says Simpsons writer and executive producer Matt Selman, “It was a bloodbath.”

But not for writer Rob LaZebnik, the league’s first back-to-back winner, who can thank his 16-year-old son and dumb luck (his words) for his $700 first-place purse.

“You’re desperately trying to do the math of how many fantasy dollars you have left versus how much everyone else has and whether you’ll be able to get one of, say, four big movies left or whether you should grab anything you can get,” says LaZebnik of the bidding process. “Plus, you really don’t want to leave money on the table.”

When Baywatch bombed, LaZebnik thought he was dead in the water — but a week later, he was redeemed with the debut of Wonder Woman, the No. 1 summer film in North America with more than $409 million in ticket sales. Heading into Labor Day, his roster’s total hovered around $413 million, giving him the widest lead in league history. Last summer, it was a tighter race, with LaZebnik, who had all of Suicide Squad and War Dogs, winning by less than $10 million.

“If it’s a horse race, it’s even more thrilling. A year ago, it came down to the last weekend,” says Selman. “This summer, so much of the branded IP ate it. You could feel that moviegoers weren’t excited about these safe sequels. Only one movie over-performed in a major way, and that was Wonder Woman. Watching so many comedies bite the dust was depressing, too.”

Along with the $700 spoils (with smaller amounts going to second- and third-place bettors), the winner also gets a banner that hangs from the rafters of the writers room (pictured below), and a sign for his or her parking space. The very first victor was writer Don Payne, who died in 2013. (That year, the league was renamed the Don Payne Movie Classic.) Selman and his compatriots are so enthusiastic about their box-office contest that they’ve shared how they do it with writers rooms at other shows, including Robot Chicken. 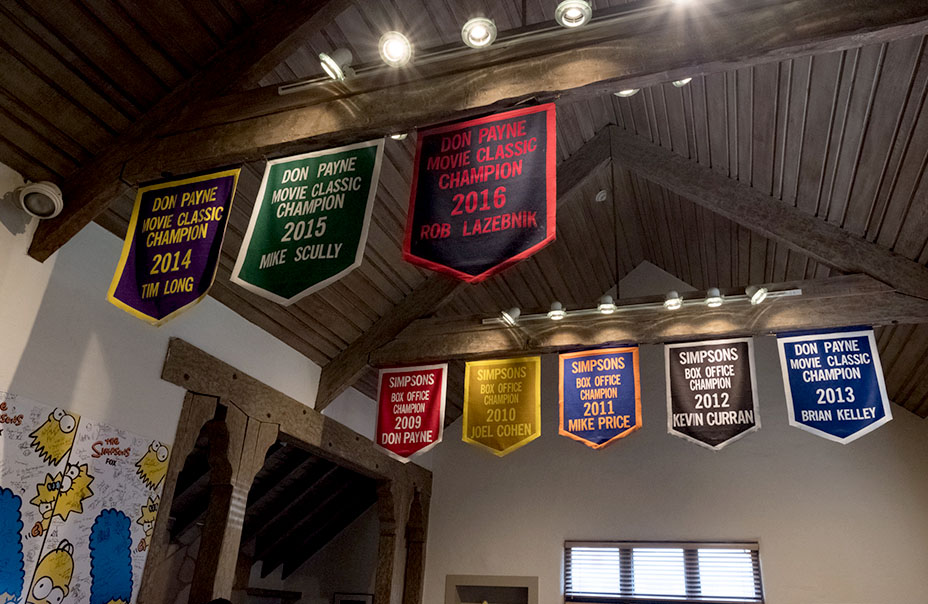