Composer Rupert Gregson-Williams knew Aquaman was going to be one of the most ambitious projects he’d ever worked on. But there were moments in director James Wan’s film that were so big that they forced the composer to rethink some of his work.

“I was writing to practical drawings and to the impression that James gave me,” Gregson-Williams tells The Hollywood Reporter. “Once I got the actual visual effects in, it was 10 times bigger than I even imagined so I had to go back and reimagine a few of those cues.”

Gregson-Williams is no stranger to the superhero world, having also scored Warner Bros. and DC’s Wonder Woman. Gregson-Williams created different themes for Aquaman (Jason Momoa) and antagonists like Black Manta (Yahya Abdul-Mateen II) and Ocean Master (Patrick Wilson), but among the most important were the first he created: the music for Aquaman’s parents Atlanna (Nicole Kidman) and Tom (Temuera Morrison), whose love story is the lynchpin for the film about a hero born of two worlds.

Read the full conversation below.

What did you and James Wan talk about in your early conversations?

It actually started way before I was hired for the film.  He wanted me to look at the trailer, a little teaser they did about a year and a half or two years ago. I had a chat with him about that back then. I had the idea from his conversations that we wanted to make Atlantis feel so much broader and epic than above the surface. We started talking about colors and themes then. About a year ago, I had a long lunch with him and gleaned a lot more character from him. I locked myself in a room for a month and came up with some ideas.

He’s been very busy, as you imagine, it’s such an epic movie. So many visual effects. And the editing was an enormous undertaking, but I got to spend quite a lot of time with him. We met on a weekly basis. I got his vision pretty clearly.

The love story between Arthur’s parents is our entry point into this story. What were your goals there with the music?

That story is as important as anything. It plays as well as any other thread in the story that we have. And that sort of goes to prove that the movie has so much heart. I realized when I read the script and when I started getting early cuts from James, that’s what the movie is about, it’s not just about this hero and this very masculine Jason character. Of course, that’s the central character, but it really sits on the lovely foundation of the heart and the two love stories that develop. Atlanna and Tom, his parents, that was the first theme that I wrote in fact, because I understood that was the beginning of the film and it laid the foundation for a lot of the score.

What do you remember about the development of Black Manta’s musical feel?

That theme came the easiest of all of them because it’s a very clear character and hopefully it’s very different from the rest of the score. He deserved something that sang out from a very different end sheet. James had a lot of ideas right from the outset about how he saw the themes in creating Black Manta. He wanted something industrial and we talked about the synths and hard-hitting beats I could do with it. As you see from the soundtrack, there’s quite a cool retro feel for it. James had visions for everything. As I got to know James over the past year, I can see what a brain he must have because he has his fingers very solidly in visual effects, in music and in story and it’s got to take a brain to have that vision.

Was there a section that was the toughest to crack?

The toughest to crack was really to find the balance of where Arthur is heroic and we really feel he uses his powers confidently. He spends a fair amount of the film finding his powers and his confidence as a king and a hero, albeit he’s a very confident and pugnacious character right from the start, he’s not really confident as a king and a hero until later on. It was getting that journey and getting the balance musically to support his development as a hero, really.

What was the key to cracking Ocean Master’s character?

He was actually one of the most fun elements of the movie to score. He’s out and out a comic book villain. I didn’t need to hold back with him. He was a lot of fun to do, but I wanted to give him something as soon as he arrived in a scene that we would recognize him as the villain. I didn’t just play for subtlety. I went for this guy you have to be scared of, because this guy has designs of taking the world. It’s not a long, big melodic theme. It’s something I can use in short bursts that would tell you, “be worried about this guy.”

Did it come naturally to you to differentiate this from your work on Wonder Woman?

It’s so different. Wonder Woman, although it’s fantastical and it’s a superhero movie, there is something about the movie the movie that felt very real, it felt plausible in real life. This one, within the first minute, you know that James Wan is a lover of comic books, it is over-fantastical, and it’s crazy and places. This really wasn’t difficult to differentiate.

What piece of music are you most proud of?

There is a point where [Aquaman] arrives on the scene and is especially heroic and that sequence turned out well. I think it supports the picture, and what James did with this particular battle is awesome and your hair is blown backwards for 20 minutes and hopefully the music gives you some sort of tingle.

With effects films, composers talk about how you don’t get much time because you might not be brought in until late in the game or not get to see finished effects. It sounds like you had more time than you might expect. Was it still a time crunch?

I had plenty of time to get my ducks in a row and get my themes written and understand the story and have James and I understanding each other and the way forward, but of course with these movies the last two or three months by default, the amount of visual effects in a movie like this, there’s always going to be a time crunch. I had written most of the score when we were two or three months from scoring the movie. As visual effects came in, I had to adjust things.

This moment that we talked about, one of the big heroic moments, I was writing to practical drawings and to the impression that James gave me. James is great at explaining character and what he’s going to visualize, but once I got the actual visual effects in, it was 10 times bigger than I even imagined so I had to go back and reimagine a few of those cues. 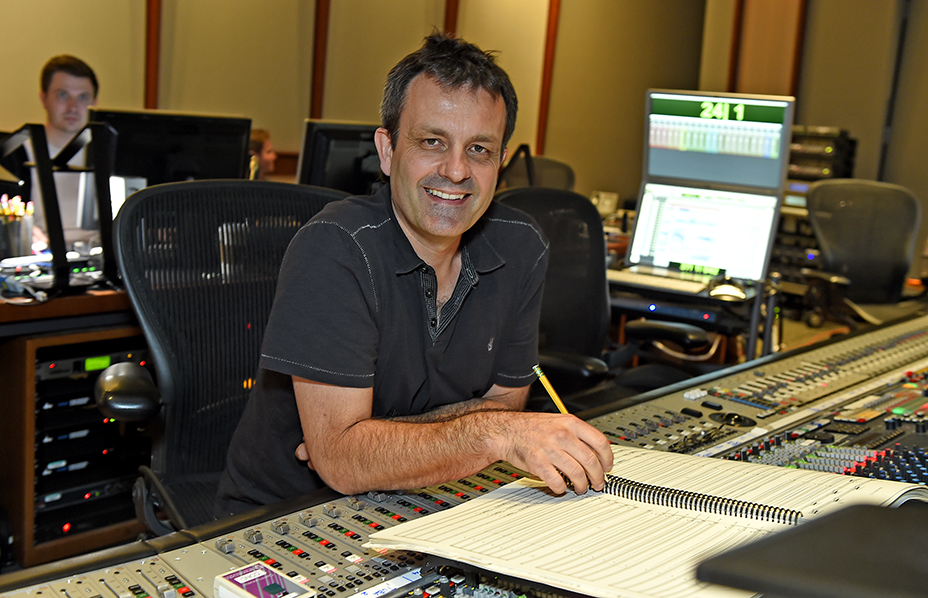