A few weeks after Manny Fonseca arrived in Los Angeles in the early part of this decade, having left his native Michigan with the hope of becoming a Hollywood writer or executive, the then 30-year-old was at a party when a producer asked if he’d “like to make a hundred bucks.” Sure, he replied. What would he have to do?

The answer was to show up the next day at a “pitch fest,” one of dozens of such gatherings each year in which hopefuls pay hundreds of dollars to serve up their story ideas to agents and executives who, in theory, will buy them if they’re good. Fonseca would be there as one of the buyers, which struck him as strange — not only was he not an executive, he didn’t even have a proper job: he had been interning with producers Arnold Kopelson and Irwin Winkler.

The Whiteness of 'Toy Story 4'

What's the "Best" Picture Ever?

“I was completely overwhelmed,” says Fonseca (now a screenwriter whose work has yet to be produced), who was soon invited to other such watering holes on behalf of Kopelson Entertainment. “There were writers that I knew by name because they would literally go to every single pitch fest. There were a couple of people that drove around in their RV. It was like following the Grateful Dead for two or three years straight.”

Pitch fests are part of a multimillion-dollar industry that thrives in a dark corner of the mainstream entertainment business, catering to thousands (and possibly hundreds of thousands) of would-be screenwriters, most of them clueless about how to get their projects made. There are writing festivals, competitions, workshops, websites, extension classes, seminars, script analysts, coaches and a Writers Store in Burbank (which offers software, books and a “do-it-yourself MFA”), not to mention rapacious producers and hungry managers, all making money from putative scribes often oblivious to Hollywood reality.

“What I learned — and I know it because I was the one being sent to these things — is you’re sitting there with no power,” says one literary agent. “As an assistant at an agency, you’re not allowed to sign people, and most of the time you’re talking to amateur writers who shouldn’t be repped.”

It would be wrong to dismiss everyone toiling in this ecosystem out of hand. Many have solid credentials (among them writing professors Robert McKee and John Truby, and Black List founder Franklin Leonard); others, however, are schemers eager to hook starry-eyed newcomers.

Pitch fests are a prime target of critics. Having exploded in the 1990s, when the spec script market was at its peak, these gatherings dropped in popularity but appear to be regaining momentum with such deep-pocketed, content-hungry buyers as Netflix and Amazon entering the market. The best known include the Hollywood Pitch Fest, Ken Rotcop’s PitchMart, Virtual Pitchfest and the Great American PitchFest. Most are based in Los Angeles and New York, but they can also be found in other parts of the U.S. and Canada. Each promises the chance to meet agents, producers and executives; the reality of many, however, is that the “executives” are usually low-level operatives dispatched by higher-ups to field pitches that usually go nowhere. With no power to spend, these junior-level reps are typically paid a small sum along with perks such as restaurant vouchers.

The agent recalls listening to a typical pitch: “The guy said, ‘I traveled all the way from Minnesota to pitch you a script for this A-level talent, and it’s about a former rock star who ends up on an island, and the movie is him trying to figure out how to get off it.’ Eventually he digs to the bottom and finds a treasure chest, which was the end of the pitch — and that was one of the more normal ideas.”

Nick Iandolo, a Boston-based aspiring writer, recalls how a positive experience at one fest turned sour. After the weekend-long event, “I felt inspired,” he says, even though he had spent more than $1,000 on his ticket and airfare to L.A. “So I decided to go back. I had written a family holiday adventure and a crime drama, so I’m all psyched: ‘I’m gonna go, and I’m gonna be an exhibitor’ ”— that is, he would purchase a stand where he could display his projects, including a book he had written. Like so many others, he came away empty-handed. “I didn’t sell one book. I was like, ‘My God, how is this possible?’ I’d spent a total of $6,000.”

For those uncomfortable with pitching, there’s a host of other ways to lose money, including a slew of writing competitions. The most legitimate and prestigious of these is run by the Academy; the Nicholl Fellowships are worth $35,000 apiece and are awarded to as many as five new writers each year, often launching their careers. Previous winners include Susannah Grant (Erin Brockovich) and Allison Anders (Gas Food Lodging). With other competitions, however, it’s advisable to read the fine print. Even well-intentioned contests can end up having strings attached.

The LAUNCH Screenplay Competition was started with considerable hoopla by two young producers, Jason Shuman (Lone Survivor, Rebel in the Rye) and Zachary Green (Spartan), promising that the winner would have his or her script made with a budget of $1 million, funded by an anonymous donor. Green says their goal was to give student writers a chance to have their voices heard, with their projects read by well-established judges including casting director Barbara Fiorentino, APA agent Chris Ridenhour and director Ali LeRoi. But Green admits he and his partners made a mistake in asking all 25 finalists to grant them a free 18-month option.

The prospect of giving up rights to a script for a year and a half — with no pay — horrified several entrants. But, says Green, “We’ve revised that. It was an admitted overlook on our end. We’ve emailed the finalists to say we’ll negotiate a new option agreement for the screenplays we want to move forward with.” Even so, contestants still have to sign the free option agreement and will have to take him at his word that it will change.

Before submitting to such contests, writers may wish to turn to coaches such as McKee, if they are ready to pay the $850 he charges for a three-day seminar that he now conducts in Los Angeles, New York and London; he’s held others in Moscow and Beijing.

Then there are freelance script analysts who charge anything from $45 to $2,000 for notes. A writer who moonlighted as an analyst says he got fired by the company that hired him for being too blunt in his verdict. “I had a guy write a sequel to a 1996 movie [F. Gary Gray’s Set It Off],” he recalls. “It was so God-awful. He literally misspelled the main character’s name throughout the script, and he paid for seven pages of notes. Ultimately, I got fired because I did not blow him. The problem is that if you give too-harsh notes or any shred of honesty, that person is probably not going to come back. That hurts the business model. The idea is to hook them.”

Roadmap Writers is one of several companies that provides script analysis and other forms of counsel. Among its offerings are brief telephone consultations with executives who will read the first few pages of a screenplay and chat about it for 15 minutes at a cost of $45 (or $275 for a full hour). Among those offering their insight: two junior managers who have no clients listed on IMDb and a “development assistant” with an independent production company. (Roadmap CEO Joey Tuccio did not respond to a request for comment.)

That also applies to some dubious producers who charge money to get pictures off the ground. One “took my best friend for roughly $28,000 that she never got back,” says Fonseca, adding that many writers end up giving so-called producers money to move a project forward. “It ruined her spirit, and she ultimately left town and ran back to Detroit.”

Iandolo discovered that agents don’t always guarantee success either when he was approached by John W. Benson of the literary agency and lecture bureau B.K. Nelson Inc. “I get a letter in the mail saying, ‘We love your script! We want to represent you at the American Film Market. We just need you to spend a thousand bucks on materials,’ ” he recalls.

In fact, in two separate letters (which THR has reviewed), Benson offered to represent Iandolo at a pitch fest for $395 and at AFM for $995 — even though it’s been illegal for agents to charge fees for securing work since California passed the Krekorian Talent Scam Prevention Act in 2009. Iandolo never reported Benson to authorities, and B.K. Nelson Inc. did not respond to an email requesting comment. Its listed telephone numbers no longer work.

That writer got lucky and thought twice before paying Nelson. “I called this friend who’s been dealing with the Hollywood scene and said: ‘Dude, I’m really excited! What do you think?’ ” he recalls. “He was like, ‘Man, this is the biggest scam I’ve ever seen in my entire life!’ ”

Says another agent: “A lot of these things are fairly big scams. They say, ‘This is your only access point, and it will get you connected to the right people if you give us X amount of money.’ ”

Such schemes may be on the wane thanks to online outrage and the arrival of several more transparent internet services that appear to be getting good marks.

One is InkTip, a website that allows writers to post their scripts for a modest fee. Another is Black List, founded by Leonard, a former executive with Universal Pictures who made his name circulating an executives’ poll of the best unproduced screenplays. Since its inception in 2012, the site claims “it has hosted more than 55,000 screenplays and teleplays and provided more than 85,000 script evaluations.”

Unlike so many of the moving parts in this cottage industry, Black List is well regarded within Hollywood. “We aren’t interested in forcing anybody to work with us in an ongoing way,” says Leonard. “This is simply a means for someone to have their work evaluated and lay bare the fruits of that evaluation to members of the industry, through a reliable intermediary — us.” 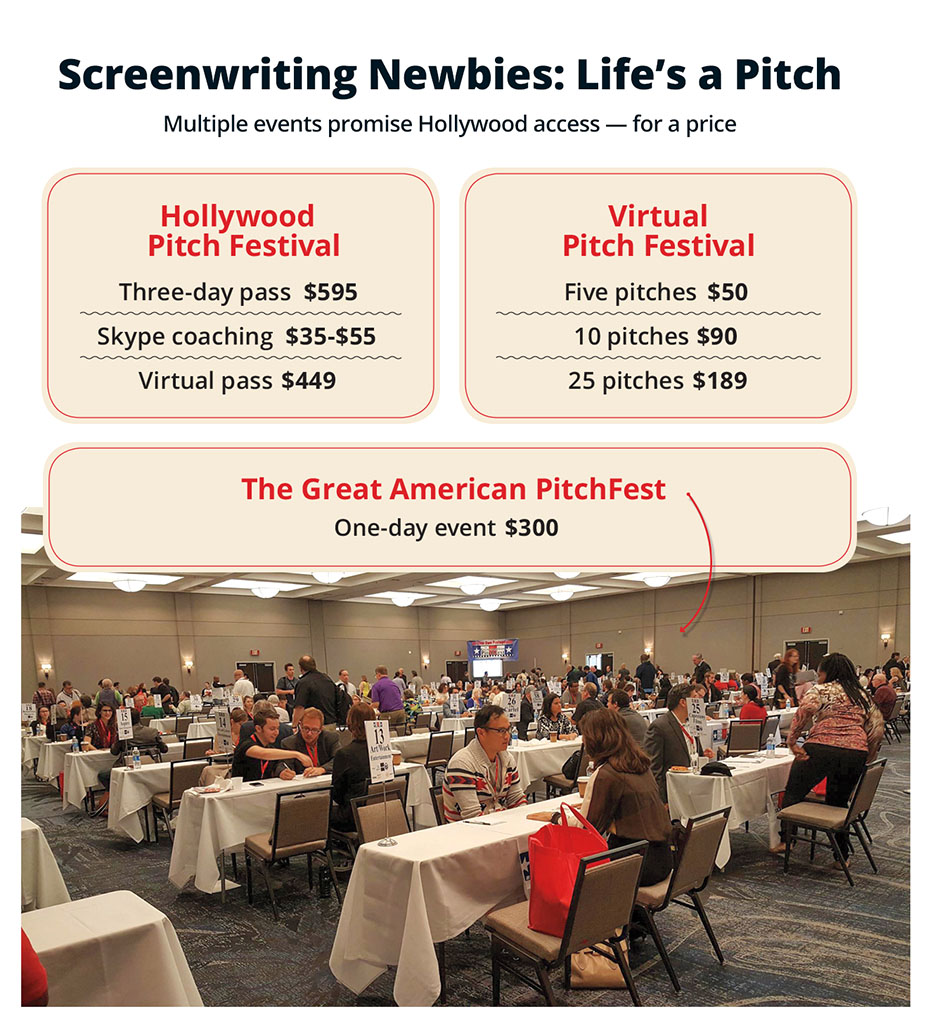 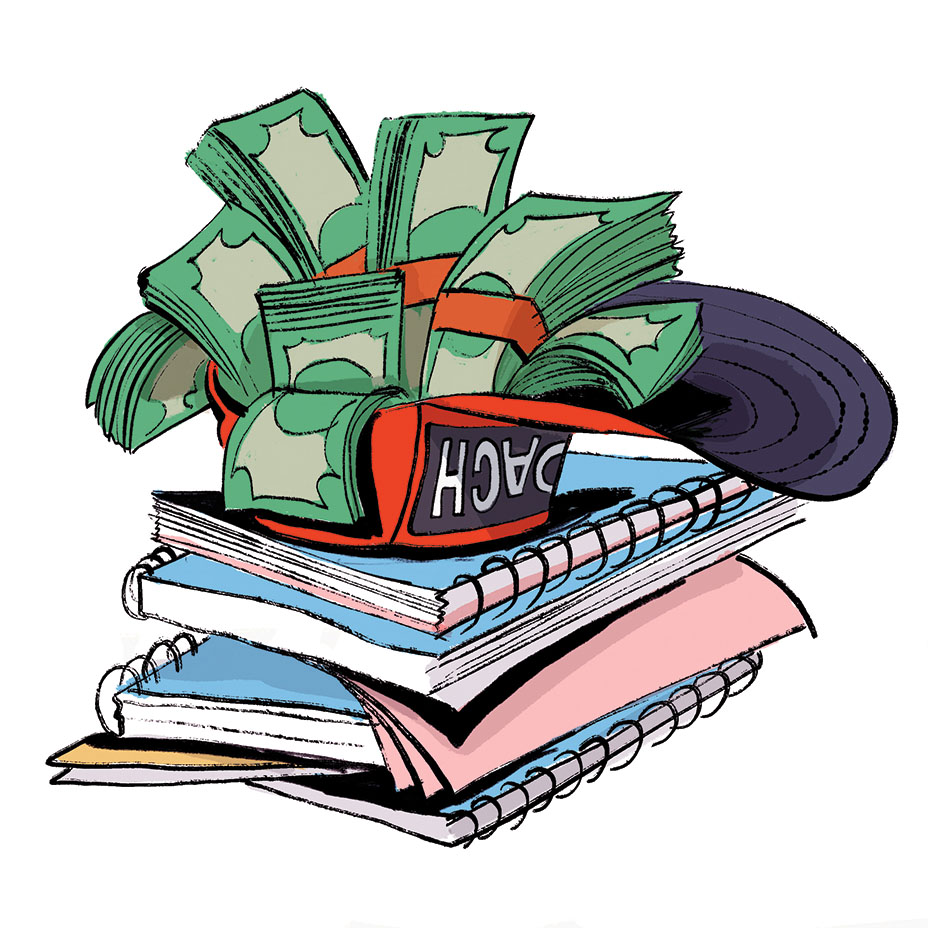 For more Galloway on Film, please check the archive.

This story will appear in the Aug. 1 issue of The Hollywood Reporter magazine. To receive the magazine, click here to subscribe.