But Unfriended: Dark Web isn’t real. Susco understands how communication functions, or doesn’t function, in an online space, but he lacks a firm grasp on the fear factor of those spaces, the boogeymen lurking in HTML code and data packets. Urban legends are fun, but fun the way campfire ghost stories are fun. If you really want to get piss-your-pants-scared, sit through Sam Levinson’s Assassination Nation, not necessarily a good movie, not necessarily a bad movie, but a movie with a clear-eyed understanding of the horror of life in the time of privacy’s demise. He recognizes that your privacy is no longer yours, and that social mores are shifting ever so slightly day by day to accommodate, and even endorse, the loss of confidentiality.

Granted, Assassination Nation carries its premise to a bonkers conclusion that undermines its examination of digital privacy: Salem, the film’s setting (Levinson’s not-at-all-subtle nod to those infamous witch trials you might have heard about in middle school history class), explodes into violence when an unknown perpetrator hacks just about every damn device owned by every damn person in town and spills their secrets before their friends, family and neighbors. The outrage starts out as just that, anger expressed indiscriminately at the nearest scapegoat, which, of course, is bad enough on its own merits. But eventually, the anger turns into fascist interrogation and mob rule, dramatized through bloody home invasions. 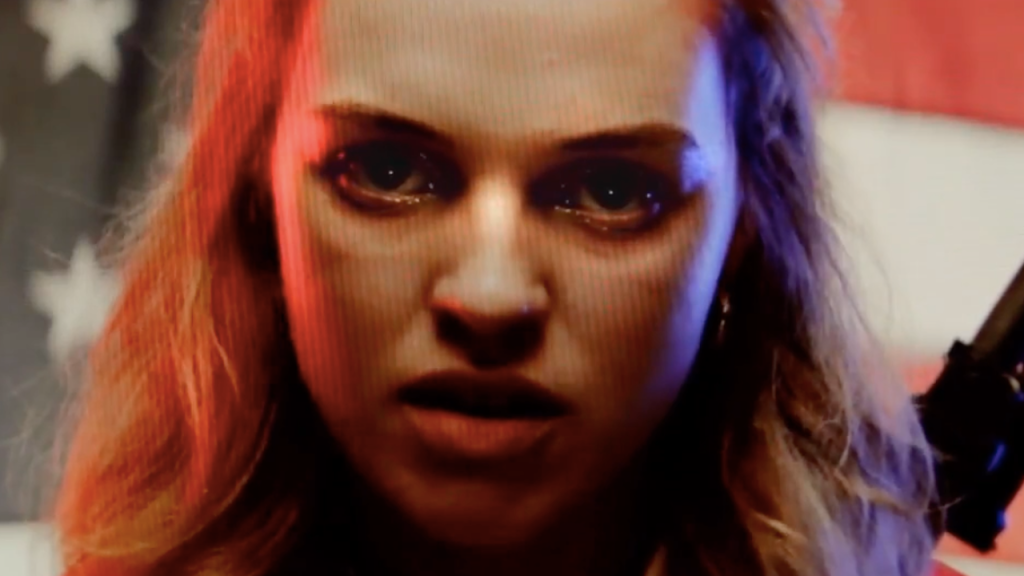 Once the movie reaches this stage of its narrative, Levinson decides to deck out his primary cast — Odessa Young, Suki Waterhouse, Hari Nef and Abra — in slick red coats, a nod to the Japanese sukeban film Stray Cat Rock: Delinquent Girl Boss, arm them to the teeth with everything from guns to katanas, kill a bunch of high school athlete bros, and lead a legion of teens in a march on the streets, defying the furious hordes of Salem townsfolk out for blood; not exactly a fitting end for what Assassination Nation accomplishes prior. The film is at its most compelling when laser-focused on the consequences and ramifications of breaking into Pandora’s mobile device, when people’s quiet inclinations and hushed hypocrisies are exposed and they break under the strain of the truth.

First there’s Mayor Bartlett (Cullen Moss), a man with an anti-LGBTQ political streak who we learn hires male escorts and dresses in women’s clothing in his free time. His improprieties revealed, Bartlett holds a press conference and blows his brains out on live television. No big loss, says Bex (Nef), a transgender woman with an uncompromising sense of justice — Bartlett got to enjoy the freedoms he sought to deny people like her. Death is better than what he deserves. The assertion doesn’t go unchallenged. Lily (Young) suggests that what Bartlett deserves is empathy, even considering his awful politics. Either way, Bartlett’s unmasking is a snowball ahead of an avalanche.

Next there’s Principal Turrell (Colman Domingo), whose family photos earn him accusations of pedophilia: He has a picture he took with his 6-year-old daughter while she was in the bath, and his students’ parents aren’t having it. Like Bartlett, he holds a press conference. Unlike Bartlett he makes it out alive, but the barnyard braying of the assembled masses drowns out any hope of a nuanced conversation. Eventually, he just walks off the stage, dignity fractured, totally defeated by the blunt force trauma of the crowd’s rancor. Eventually students turn on each other, one girl clubbing another, obnoxious cheerleader Reagan (Bella Thorne), with a baseball bat, the jocks giving Diamond (Danny Ramirez) a beating for seeing Bex behind their backs, the whole school slut shaming Lily for spicy texts traded back and forth between her and an unknown party only referred to as “Daddy.” Hint: It’s not her dad. It’s also not her boyfriend, Mark (Bill Skarsgård).

The end product of this mass denudation of secrets is chaos. Lily gets kicked out of her home by her parents while her brother watches dispassionately, figuratively drinking it in as he literally glugs down a soda the size of his head. We can’t stop watching, either, because we’re just as bad as he is, consumers all. Nobody’s innocent of watching trainwrecks in motion, especially when you can just watch them on your phone. (Schadenfreude on the go, for you busy bee types.) And they’re fun to watch, too, at least when the person they happen to is objectionable or unpopular. We get a kick, and for good reason, when groups like Anonymous hack KKK websites or leak the identities of hate group members to the world; we’re less enthused about credit card hacks, or when our own security is compromised and strangers access our emails. It’s violating. It changes who we are and how we see the world we live in, too.

Assassination Nation reads like a wild swing at bat, where Levinson gets a chunk of the ball but can’t make his way around to home plate. The more outre the film gets, the less interesting and less honest it gets. Its clarity fades into a catharsis that’s admittedly pleasing but unsatisfying all the same. But when Levinson hews close to the realities of the internet age’s dangers, the movie cuts far deeper than its peers. You don’t need to be afraid of online thrill-kill gangs. You need to fear the guy with time on his hands and an entryway to your most personal confidences.

‘Guardians of the Galaxy Vol. 3’ Trailer Teases the End of an Era for Marvel