Continue to The Hollywood Reporter SKIP AD
You will be redirected back to your article in seconds
Skip to main content
April 9, 2021 6:00am

When the idea of making a biopic about Mahalia Jackson first came up, about half the members of Lifetime’s Original Movies group hadn’t heard of the gospel legend and civil rights leader — which, for that team, was a selling point.

“We had been talking about women who have historically made impacts that no one talks about,” says head of movies Tanya Lopez of the group’s brainstorming sessions. It was programming manager Mekita Faiye who suggested Jackson, and though those to whom she pitched the idea were unfamiliar with the legend, they didn’t dismiss the proposal. “Everyone loses when we don’t take the time to understand others’ unique experiences, especially when it’s due to economic, ethnic or even religious differences,” says Faiye, one of six people of color (including Lopez) on the 11-person LOM team. “Fortunately, Lifetime creates a culture of openness and compassion while making a concerted effort to value everyone’s voice in the room.”

So when Lopez had lunch with Robin Roberts (who has a production deal with the network) and the Good Morning America anchor mentioned Jackson as a subject of interest, the soil was already fertile for its latest biopic, Robin Roberts Presents: Mahalia, which stars Tony nominee Danielle Brooks and premiered April 3.

Mahalia is Lifetime’s third biopic of 2021, all of which focus on Black women (Salt-N-Pepa bowed Jan. 23, followed by Wendy Williams: The Movie a week later). In all, 22 of the network’s 68 bio­pics since 1993 have centered the lives of Black women. That’s nearly a third — far above the demographic’s 3.7 percent share of lead or co-lead characters among theatrically released films (according to a study released in March by the Geena Davis Institute on Gender in Media and USC, which examined the 100 highest-grossing films each year from 2009 to 2019). In an era in which inclusion can be received as a begrudging mandate, LOM’s development process reveals a blueprint for a more organic path.

To hear Lopez tell it, Lifetime has come by its track record somewhat incidentally. “Our biggest victories are telling stories of women and things that people don’t know about,” she says of choosing subjects. And since Black history has long been minimized or excluded from textbooks and news involving Black communities left off the front page, those stories provide a rich vein for Lifetime to mine, from 1999’s Dangerous Evidence — the story of efforts by civil rights activist Lori Jackson (Lynn Whitfield) to exonerate a Black Marine falsely convicted of rape — to last year’s The Clark Sisters: First Ladies of Gospel.

While Lifetime has given the biopic treatment to plenty of universal household names, like Whitney Houston, Simone Biles and Meghan Markle, The Clark Sisters is an example of a decision to commit resources to figures beloved within the Black community but not as well known outside it. Once again, it was a Black executive, LOM manager Mychael Chinn, who surfaced the name. And, once again, though non-Black teammates didn’t recognize the gospel group, they didn’t discard the idea as “niche.”

“When we all did our due diligence, we were almost ashamed we didn’t know who the Clark Sisters were, and that has to do with everybody’s education,” Lopez says. “It’s definitely a cultural and racial divide.”

Lifetime’s forays into bridging that divide haven’t hurt its critical or commercial prospects. The network’s 2006 Fantasia Barrino biopic is its second-highest-rated original film of all time, behind 2004’s biopic of Jessica Savitch and just ahead of the network’s 2012 Steel Magnolias remake, starring Queen Latifah and Phylicia Rashad alongside Alfre Woodard, who earned Emmy and SAG nods for her performance.

“[Lifetime] was a place I knew I could go and see myself,” says Brooks. She notes that she has fielded offers to portray Jackson in the past but chose the Lifetime project because of the network’s track record of telling Black women’s stories. “I could either wait for the magic to happen with a big blockbuster movie, or I could get in the line of women that have had success doing Lifetime movies, and where my community will watch them,” she says, adding that the network helped present a drive-in screening of Mahalia in her South Carolina hometown for the 200-plus members of her church.

“It’s exciting to see Lifetime stepping forward to tell the stories of extraordinary, groundbreaking Black women, particularly those who may not have wider name recognition, such as gospel greats Mahalia Jackson and The Clark Sisters,” says Angela Bassett, who starred as Coretta Scott King opposite Mary J. Blige as Betty Shabazz in Lifetime’s Betty and Coretta before making her directorial debut with the network’s Whitney. “By doing so, it offers those who are familiar with these women an intimate, compelling glimpse into the complexity of their lives behind the curtain, but also introduces their inspiring journeys as artists and women to new, more diverse audiences.”

Lopez says the themes in these projects — the female friendship dynamics in Salt-N-Pepa, the heroism of a school employee who talks down a would-be shooter in 2018’s Faith Under Fire (starring Toni Braxton) — are compelling to any female audience. “These are the stories we’re interested in telling, no matter the background,” she says, turning to the more unsung women of the civil rights movement, including King, Shabazz and Jackson. “A certain portion of our audience only knows of Martin Luther King, because he’s the one the white media and history focused on. So when we look at iconic figures, what’s the story of the woman standing next to the person the light is shining on? I want to make those women the feature of what history is forgetting.” 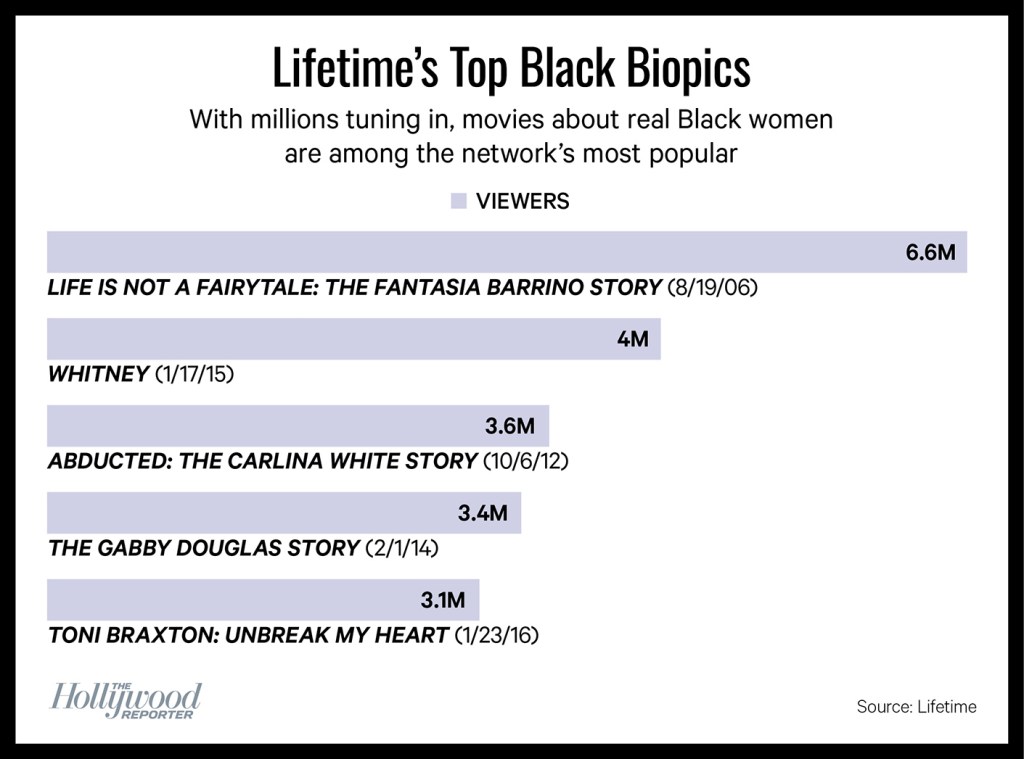