It’s a tale almost as old as time itself: the story of how a workaholic father is so unable or unwilling to focus on his family that some magical character has to step in and make him appreciate the finer things in life. There are plenty of examples of this saga — in which a series of fantastical elements are utilized to create movie magic — playing out in family cinema, from 1964’s Mary Poppins to the 2003 Will Ferrell vehicle Elf. Some films, such as those mentioned, are able to employ this storyline and work, either because the workaholic-dad aspect is more of a B-plot than the driving factor or just because the actors are so damn charming. But then there are others like Christopher Robin, which makes the workaholic dad the A-plot to its detriment.

What would it be like if Christopher Robin grew up? The end of A.A. Milne’s The House on Pooh Corner, the second Winnie-the-Pooh book, suggests that Christopher’s time with his stuffed-animal friends of the Hundred Acre Wood is coming to an end. In short, the little boy is about to become a big boy, off to grow up, go to school and become an adult. But Milne’s book doesn’t end with us seeing what an adult Christopher would look like; we just get the implication that his childish spirit would always remain with Pooh, Tigger and all of his friends. Christopher Robin’s opening scene essentially adapts the last scene in Pooh Corner, and then proceeds to answer the question of what an adult Christopher would be like, in profoundly disappointing ways.

Part of the problem isn’t just that the workaholic-father storyline has been done to death over the last 50 or so years. It’s that, at least in Disney’s prior conceptions of the Winnie the Pooh characters, Christopher Robin is typically the least interesting character. This isn’t a slam on Disney’s version; frankly, Christopher Robin is closer to an avatar to the viewer or reader than a true character. He helps out with Pooh and the others sometimes, but the adventures are theirs, and we get to experience them vicariously. Yet in Christopher Robin, Pooh and the others are decidedly supporting characters, while we watch Christopher (Ewan McGregor) struggle with how he’s going to save the suitcase company he works for as an efficiency manager. It’s as exciting as it sounds.

The choice on the filmmakers’ part to feature Pooh, Piglet, Tigger, Eeyore, Rabbit, Owl, Kanga and Roo in the opening scene, and then not again for a good 20 minutes, is almost tantamount to trolling the audience. Things ostensibly move a little faster once Pooh inexplicably finds himself in London after crawling through Christopher’s old entryway to the Hundred Acre Wood. (Pooh’s dismissive explanation to an incredulous Christopher as to how he’s there suggests that the film is not interested in internal logic — which is a convenient way to shrug off legitimate questions of exactly how implausible the story is.) But even then, Pooh is stuck asking questions about briefcases, workplace frustrations and more. 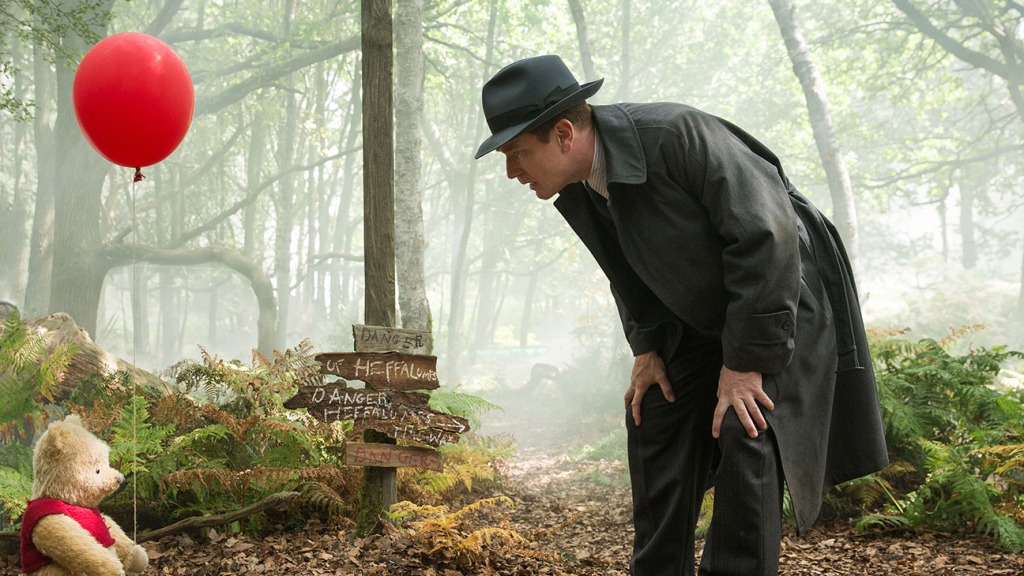 No matter how much Christopher Robin tries to differentiate itself from other workaholic-dad films, it’s still very much in the same vein. Director Marc Forster tries to shake things up whenever Pooh is onscreen, taking his cue from Steven Spielberg’s E.T. by placing the camera at Pooh’s height so we see his view of the world. It’s an unexpected choice, as are the random shots of Pooh dreamily touching the leaves and branches of the Hundred Acre Wood with his paws as opposed to charging ahead like Christopher Robin. But it’s still just a story about how a tightly wound adult loosens himself up slightly by regaining a touch of his childhood. Pooh’s indefatigable charm isn’t exactly erased here (Jim Cummings remains delightful to listen to, both as Pooh and Tigger), but it is in service of an overly familiar plot.

Some of the elements of both the Milne stories and the Disney animated films are present in Christopher Robin. Pooh taps his head with his paw and tells himself to “think, think, think”; Tigger boisterously sings his self-inflating song; Eeyore never fails to remind everyone of how depressed he is; and so on. But the climax of the new pic revolves around an adult man proudly saving his job at a stuffy suitcase company in a drab-looking version of London, while also embracing his role as a father and husband. This film, no matter how hard it tries, is barely more than a drab-looking take on a storyline that was done best in the early 1960s, at the same time when Walt Disney was helping bring Winnie the Pooh to life onscreen for the first time.