Continue to The Hollywood Reporter SKIP AD
You will be redirected back to your article in seconds
Skip to main content
November 22, 2018 6:30am
Logo text

[This story contains spoilers for Creed]

Sometimes, the sign of a great filmmaker is in how much you miss them when watching a movie that takes over from where they left off. Such is the case with the highly anticipated sequel Creed II, which continues the stories of heavyweight boxer Adonis Creed (Michael B. Jordan) and his trainer Rocky Balboa (Sylvester Stallone), the underdog who became a legend. Though most of the cast of the 2015 film that elevated lead Jordan to genuine stardom has returned, there’s an unfortunate absence that you can’t help but notice while watching the (admittedly solid) sequel: director Ryan Coogler isn’t behind the camera.

Coogler is still credited as executive producer of the new film, in which Adonis chooses to take part in not one, but two grudge matches with Viktor Drago (Florian Munteanu), the large and physically dominant son of none other than Ivan Drago (Dolph Lundgren). Although Adonis suffered a great loss, without even knowing it, when Ivan killed his father Apollo in the events of Rocky IV, the elder Drago lost his status when Rocky defeated him. So he wants his son to exact revenge upon the new heavyweight champion of the world, and Adonis thinks he wants revenge for his father’s death. (The operative word there is “thinks.”) The now-older Rocky, of course, knows all too well how dangerous a Drago can be, but isn’t able to pierce through Adonis’ bravado until after a disastrous first match that leaves him recuperating for months.

There’s a lot to like about Creed II, even though it feels painfully familiar in how it remixes plot elements from just about every prior film in the four-decade Rocky franchise. Jordan is as charismatic as Adonis Creed as he was in the original film; when Adonis is in the hospital after the brutal beating delivered to him by Viktor, the rage he feels is as intense as any punishment we see him dole out in the ring. Here, and in other moments, it’s clear that whatever makes these new movies work, it’s largely thanks to casting someone bursting with talent like Jordan. His chemistry with just about every other performer, whether it’s Tessa Thompson as his fiancee or Stallone as Rocky himself, elevates much of the film beyond its mildly derivative roots. 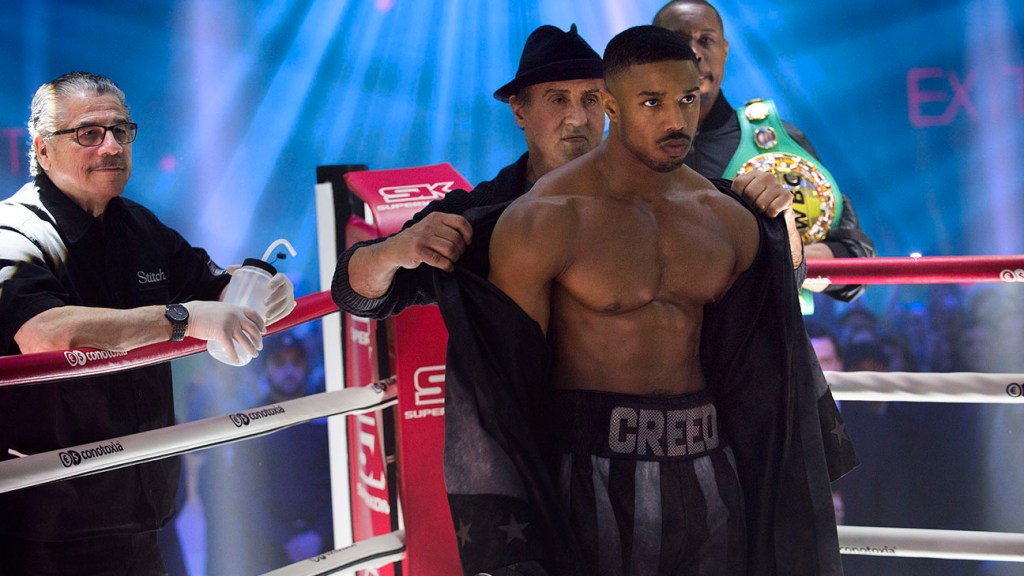 Of course, it’s true that Creed had similarly recognizable roots. But the combination of Jordan and director Ryan Coogler lifted that film to the same level of quality as the original Rocky, if not beyond it. Creed II is directed by Steven Caple, Jr., who’s perfectly adequate behind the camera without bringing the same propulsive charge to the boxing sequences or the various dramatic moments surrounding them. And unlike the first Creed, Creed II is co-written by Stallone himself, thus making this feel like even more of a movie about Rocky as it is about the younger Creed. For example: Creed’s fiancée, Bianca, in the middle of her burgeoning music career, gets pregnant; when she delivers the baby, it happens offscreen. The first time we, as an audience, meet Creed’s son is when Rocky’s invited into the room as the child’s godfather. And when, in the rousing but unsurprising finale, Creed finally defeats Viktor, the celebration culminates as we watch Rocky’s vantage point, not the younger boxer’s.

What this speaks to is the sense that Creed II feels closer to a film directed by Stallone, in that its focus is more than it should be about his character. Though Rocky was an integral part of Creed, the focus lay squarely with Adonis as a character, struggling to break through his frustration with his absent father and the burden of expectations that weighed upon him. There’s an echo of those expectations in this film — Adonis fails in the first fight, in part because he felt like he was supposed to fight Viktor and less because he wanted to fight the young Russian. And the subplot in which Viktor and Ivan battle against expectations of their own in Eastern Europe is intriguing in how it attempts to humanize characters who could very easily be demonized. (Of course, in Rocky IV, Ivan Drago did kill Apollo Creed, so it may be a bit late to ask us to feel sympathy for him.)

But the sense of expectations is unavoidable when watching Creed II. It’s one thing when a filmmaker creates an instantly beloved new movie, and returns behind the camera for the sequel. No doubt, expectations play into how an audience is going to react to that follow-up. (Coogler didn’t direct this movie primarily because he was working instead on Marvel’s Black Panther. Just imagine the level of expectations the sequel, which he will be helming, is going to have. He’s got a high bar to clear.) But without Ryan Coogler behind the camera for Creed II, there’s a distinct feeling that this movie goes back to playing the hits of the earlier Rocky films. The first Creed acknowledged the series’ history and played a few of the same notes, but this movie goes all in on covering and remixing what audiences responded to back in the 1970s and 1980s. It’s entertaining for what it is, but there’s always a sense that Coogler could have done for Creed II what he did for Creed, elevating the sequel beyond being just another franchise entry.